This study aimed to investigate the patterns of retropharyngeal lymph node (RLN) metastasis in patients with nasopharyngeal carcinoma (NPC). Sixty-two patients with NPC underwent nasopharyngeal magnetic resonance imaging. Magnetic resonance images were reviewed collectively by the research team. Nodal involvement was classified according to the Radiation Therapy Oncology Group nodal classification guidelines. Locations of the involved RLNs were recorded, and the relationships of RLN metastasis with primary tumor extension and clinical stage were analyzed. Among 62 patients with NPC, 47 (75.8%) exhibited level IIb nodal metastasis, and 39 (62.9%) had RLN metastases. Overall, 60 metastatic RLNs were detected. The center, cranial, and caudal borders of metastatic RLNs respectively included four (6.7%), 17 (28.3%) and three (5.0%) lymph nodes in the occipital bone; 45 (75.0%), 40 (66.7%), and 33 (55.0%) lymph nodes in the first cervical vertebra (C1); 10 (16.7%), three (5.0%), and 21 (35.0%) lymph nodes in the second cervical vertebra (C2); and zero (0.0%), zero (0.0%), and three (5.0%) lymph nodes in the third cervical vertebra (C3). The incidence of RLN involvement did not increase with the incidence of primary tumor invasion to the parapharyngeal space, prevertebral muscle, oropharynx, nasal cavity, skull base, paranasal sinuses, and cavernous sinus. The incidence of nodal metastasis among patients with NPC was highest at the cervical lymph node level IIb, followed by the RLNs. There was a linear decrease in the incidence of metastatic lateral RLNs from levels C1 to C3.

Nasopharyngeal carcinoma (NPC) is one of the most common types of malignant tumors, and, as the nasopharynx is rich in lymphatic drainage, 60-90% of affected patients present with lymph node metastasis prior to treatment. Treatment efficacy depends on tumor T stage, N stage, histological type, adjacent invasion, tumor size, and selected treatment programs [1]. Currently, radiotherapy is the mainstay of treatment for NPC, and the overarching principles of lymph node metastasis have been a significant factor in radiation field design. A study by Kato et al. indicated that magnetic resonance imaging (MRI) exhibited a significantly better ability than computed tomography (CT) in detecting retropharyngeal lymph node (RLN) metastasis [2]. Soft tissue is more readily visible on MRI; hence, MRI can present lymph node metastasis and NPC clearly and completely. MRI has been widely applied for the diagnosis of NPC, largely because it decreases radiation exposure. In 2008, Liao [3] reported a significant difference between CT and MRI in distinguishing invasion of the base of the skull (CT 31. 0%, MRI 52. 6%) in 420 patients diagnosed with NPC. Zhan et al. [4] found that the positive rates of invasion were 48.3% and 33.3% using MR and CT, respectively. Therefore, MRI has more advantages in distinguishing invasion of the base of the skull, and it can be used to accurately estimate invaded range and accurately sketch the tumor target.

In this study, the principles of RLN metastasis in NPC were analyzed using MRI. According to the literature, the cervical lymph nodes and RLNs are the most common sites of metastasis. Although pharyngeal lymph node metastasis is common in NPC, its prognostic value is not clear, and the current staging system does not specify whether RLNs should be subject to T or N staging. Therefore, studies of the principles of RLN metastasis are important not only when determining regions that should be targeted with radiotherapy in cases of NPC, but also for clarifying their prognostic value in staging systems.

Sixty-two patients with pathologically confirmed NPC underwent initial treatment at our hospital between November 2009 and April 2010. The patients had a median age of 49 years, and a male: female ratio of 3.4:1 (48 men, 14 women). Before treatment, all patients underwent nasopharyngeal MRI, chest radiography or CT, and abdominal B-ultrasonography. Patients with stage T3-4 disease, lymph node diameter >4 cm, or supraclavicular lymph node metastasis also underwent whole-body bone scans. This study was conducted in accordance with the declaration of Helsinki. This study was conducted with approval from the Ethics Committee of Ningbo No.2 Hospital. Written informed consent was obtained from all participants.

All data were entered into the SPSS 11.5 software (SPSS, Inc., Chicago, IL, USA), and the chi-square and Fisher’s exact tests were used to analyze the relationships among RLN metastasis, primary tumor, surrounding tissue involvement, and clinical staging. A P value<0.05 was considered statistically significant.

Data describing the relationship between lymph node metastasis and tumor invasion site are presented in Table 2. Notably, RLN metastasis did not correlate with invasion of the pharyngeal space, nasal cavity, oropharynx, palate sail muscle, head longus, pterygoid and wing muscle, skull base, pterygopalatine fossa, infratemporal fossa, paranasal sinuses, eye orbital, cavernous sinus, or other sites. Additionally, we did not observe a relationship between RLN metastasis and staging, which might be attributable to the small number of cases (Table 3).

Radiotherapy is the treatment of choice for NPC, and it is even preferred over surgery. Therefore, it is difficult to perform pathology via lymph node dissection, and the reported 5-year post-radiotherapy survival rate among patients with NPC is as high as 83.3% [6-8]. Due to the application of intensity-modulated radiotherapy, the 5-year survival rate has improved to 78-83.3% [9-10]. Herein, all cases with long-term follow-up may be used to assess the diagnosis of lymphatic metastasis, and relevant results may validate the accuracy of lymphatic metastasis by excluding the history of other potential tumors. Therefore, it is difficult to define the relationship between pathological diagnosis and imaging performance of lymph node metastasis. Previous studies have found that RLNs shrink with age; specifically, Ng et al. [11] and Ogura et al. [12] reported that on MRI scans, the minimum RLN transverse diameters among patients aged 6-19 years, 20-38 years, and 42-74 years were 6.4 ± 1.4 mm, 4.2 ± 1.1 mm, and 3.2 ± 1.0 mm, respectively. The minimum transverse diameters of normal RLNs on MRI scans in our study were ≤ 4.5 mm. Therefore, the present study used a minimum RLN diameter ≥ 5 mm as a diagnostic criterion for metastasis. Although some authors have used central necrosis as a diagnostic criterion for RLN metastasis, we seldom observed this phenomenon in lymph nodes with small diameters. The present study suggests that these standards cannot improve the sensitivity of RLN diagnosis. In this study, 62.9% patients had RLN metastases, consistent with the rate of 63.6% reported in the literature. RLNs include the outer and inner groups; the former is located outside the pharyngeal constrictor muscle and vertebral anterior muscle and inside the internal carotid artery (Figure 1). The latter is located near the body midline, close to the posterior pharyngeal wall. In this study, all assessed RLNs were located in the outer group. Because the RLNs in the inner group were not normally visible, any visible RLNs in this group on MRI were considered metastatic; however, a previous article reported that NPC with RLN metastases in the inner group was very rare. 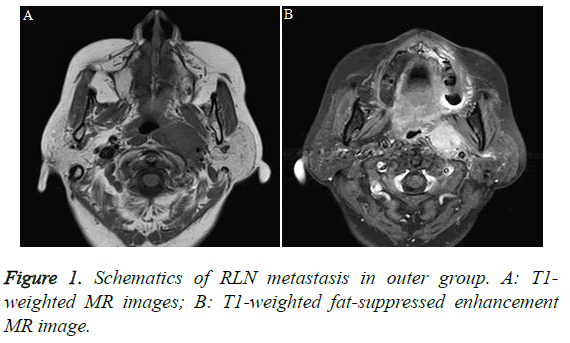 Although previous research has shown correlations between the lymphatic drainage pathway in the head and neck and the primary tumor and the location and scope of tumor invasion, the risk of RLN metastasis was found to increase when the tumor extended beyond the pharyngobasilar fascia. Liu et al. [21,22] reported a significantly lower RLN metastasis rate among T1 patients, compared to T2-4 patients (48.3% vs. 71.0%), and observed that RLN metastasis increased significantly when the sail palate muscle, oropharynx, prevertebral muscle, pterygoid muscle, and styloid gap were involved. Wang et al. [15] also reported that the RLN metastasis rate increased significantly with parapharyngeal space involvement, but did not increase when the nasal cavity, oropharynx, head longus, skull bone, paranasal sinuses, eye orbital, cavernous sinus, or other sites were involved. However, in the present study, we did not observe a similar relationship, which might be attributable to the small number of cases (Table 3). 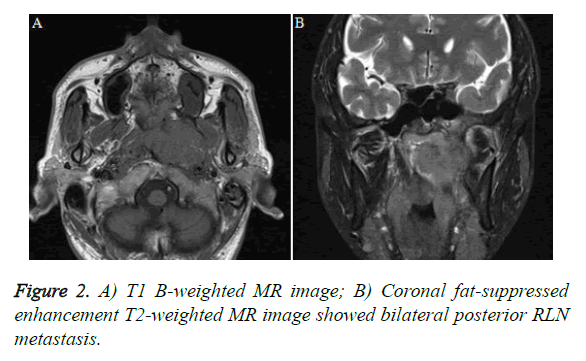 In short, the highest rate of metastasis of NPC was observed in level IIb lymph nodes, followed by RLNs. The majority of RLN metastases were located in the outer group; metastasis in the inner group was rare. The rate of RLN metastasis decreased gradually from the first to the third cervical vertebral levels. RLN metastasis had no significant correlations with the sites of NPC involvement or staging. This finding is inconsistent with other reports from larger sample sizes. We believe that the transfer of lymphonodi retropharynici is not correlated with invaded areas in nasopharyngeal cancer and neoplasm staging. Moreover, except for specific regions in Ningbo located in the coastal city, it has certain characteristics. Despite its small sample size, this study findings support confirmation with a larger sample, which may improve radiotherapy treatment in patients with nasopharyngeal carcinoma lymph node metastasis.

Our study had some limitations. First, it was a retrospective follow-up study, and the majority of patients had no pathological diagnosis. Second, the sample size was small, and statistical errors were possible. Third, we must recognize the limitations of MRI and note that some cases had false-positive or false-negative clinical performances.

This study was supported by Leader and Top-Notch Talent Project of Ningbo city (2012-131).