Pathogenic effects of PM2.5 on pulmonary infection and its relationship with cytokines

Recently, with the growth of population, the rapid development of industrialization and the increase of motor vehicles, the problem of air pollution has become more and more serious. Atmospheric particulate matter (PM) is generally considered to be the most harmful and representative air pollutant among various compositions of air pollution [1-3]. The results of many epidemiological investigations have shown that more than 80% of population in the world are breathing the air that is seriously polluted. In the polluted air, the atmospheric fine PM is closely related to human respiratory system, and the morbidity and mortality of cardiovascular disease [4-6]. PM is referred to as the heterogeneous mixture of solid particles and liquid particles suspended in the air, and it is one of the main pollution factors in urban atmosphere. The particles with diameter greater than 10 μm will generally be blocked outside the nose, the particles with diameter less than 10 μm will enter the upper respiratory tract, but they can be can be discharged out of body along with spitting or sneezing. However, to the fine particles with diameter below 2.5 μm, they can pass through the defense barrier of normal human and enter pulmonary alveoli, and then enter the blood circulation by further gas exchange function of lung tissue, leading to overall human disease [4-26]. PM2.5 has a larger ratio of surface area and volume, therefore some bacteria, viruses, fungi and other pathogenic microorganisms and some heavy metals, acid oxides, toxics of organic pollution can be absorbed onto PM2.5, resulting in an increased toxicity [4-10]. Nowadays PM2.5 has been considered as one of the biggest threats to human health. Epidemiological studies have confirmed that PM2.5 is closely related to lung infection. Increased PM2.5 concentration in ambient air can cause increased admission for pneumonia, especially for the elderly people and children. PM2.5 concentration increases per 10 g/m3, the resulting pneumonia mortality increases by 4%, chronic obstructive pulmonary disease mortality increases by 3%, and ischemic heart disease mortality increases by 2% [1].

The pathogenic mechanisms of PM2.5 on pulmonary infection are usually attributed to some bacteria bearing with PM2.5 particle, such as klebsiella-a gram negative bacilli [7,8,11]. Klesiella is an opportunistic pathogen, which is not pathogenic to the health under normal circumstances, but becomes pathogenic bacteria only when the normal immunity is damaged. Currently the study on relationship between PM2.5 and infection confirms that PM2.5 exposure can increase the susceptibility of respiratory system by bacteria or viruses to result in more serious diseases. Such bacteria and viruses include Streptococcus pneumoniae, influenza virus, respiratory infection virus and nasal virus [1,7,8,13,14,16]. However, to the best of our knowledge, the exact pathogenic mechanisms of PM2.5 on pulmonary infection are still unclear because the mechanisms are much complicated. Furthermore, the mechanism of the effect of PM2.5 exposure on pulmonary bacterial susceptibility need to be further investigated. In this study, a rat model of PM2.5 exposure to pulmonary infection was established. Through detection of the clinical score for pulmonary infection in rats, lung pathology, BALF cytology, bacterial colony counts and the bacterial infection rate before and after PM2.5 exposure, the mechanisms of PM2.5 induced lung injury were investigated and discussed to provide theoretical reasons for the prevention and treatment of human respiratory system diseases caused by PM2.5.

Sixty SPF grade male Wistar rats (age: 5-6 weeks, weight: 180-210 g) were purchased from Animal Center of Zhejiang Medical University. Wistar rats were divided into the experimental group and the control group with thirty rats in each group. Temperature and humidity were 25 ± 1°C and 55%-60%, respectively. Illumination time and dark time were both 12 h. There were no restrictions on drinking water and feeding.

The PM2.5 samples were captured and provided by environmental monitoring center. To simulate the real environment, the samples were pre-treated by mixing with automobile exhausts, industrial waste gas and a combination of bacteria. The particle size was determined by TEOM1405D dual channel particulate monitor. The particles with diameter less than 10 μm pass through the top of the PM10 cutting head to enter the sampling system, PM large particles and PM2.5 particles were separated by virtual impactor and accumulated onto the replaceable glass fiber membrane of system by passing through the dual channel. The PM2.5 used in the experiments came from these replaced membranes.

Treatment and preparation of particulates

The glass fiber membrane loaded with PM2.5 was cut into small pieces and put into 50 mL ultrapure water for ultrasonic vibration for 20 min to elute particles. After elution solution was absorbed ultrapure water (50 mL), again ultrasonic vibration for 20 min. The elution solution from two vibrations were combined in a conical flask, and filtered with multilayer gauze. The elution solution was separated with a lowtemperature centrifuge for three times at 4°C and 8,000 r/min, each time took 20 minutes. The supernatant liquid was removed and the particles were freeze dried under vacuum and then merged with particulate matter. The samples were stored in a low-temperature fridge. Particulate suspensions at three concentrations-high, medium and low concentration were prepared with deionized water, followed by ultrasonic shock for 10 min to homogeneously mix the particles.

The IgG antibody in rats blood was determined by ELISA method. PM2.5 particles was dissolved in carbonate buffer (Na2CO3 1.25g/L, Na2HCO3 1.85 g/L and NaN3 0.15 g/L). The solution was added in a whole plate for overnight package, rinsed with PBS and then closed for 4 h with 2% bovine serum albumin (BSA), and then rinsed 3 times. The serum of rat (200 μL) was double diluted to decrease the concentration from 1:5 to 1:20, the diluted serum was added into the plate to react for 1 h at 27°C followed by rinsed 3 times, then IgG antibody combined catalase (200 μL) was added to react for 1 h at 27°C followed by rinsed 5 times, H2SO4 (50 μL) was used to terminate the reaction, the OD value was recorded in the enzyme standard instrument (Biorad450) at the wavelength of 450 nm, the OD value more than twice of the negative control is defined as positive.

The concentration of antibody and cytokines after inhalation of PM2.5 was determined through the antibody in the serum of rats. The concentrations of IL-8, IL-1β, SICAM-1 and tumor necrosis factor (TNF)-α were determined by ELISA method, the operation was conducted according to the instruction of kit.

Cell count in BALF and histological examination of lung

The total numbers of cells in BALF at the 1st, 3rd and 7th day were measured after inhalation experiment. Cell sorting and counting were conducted by Wright-Giemsa staining. Lung tissue sections were stained by HE method.

SPSS 13.0 software was used for statistical analysis. All experimental data were expressed by mean ± SD. Single-factor Analysis of Variance (ANOVA) was used to compare the difference between the control group and the experimental group. Last Significant Difference (LSD) method was used for comparison of two data with homogeneity of variance. Dunnett T test was used for heterogeneity of variance. Spearman's rank correlation analysis was used for correlation analysis. p<0.05 indicates that there are no significant differences between the data.

The antibody titers of PM2.5 fumigated group was significantly higher than the control group at the 3rd and 7th day after inhalation of PM2.5, the results were shown in Figure 1. 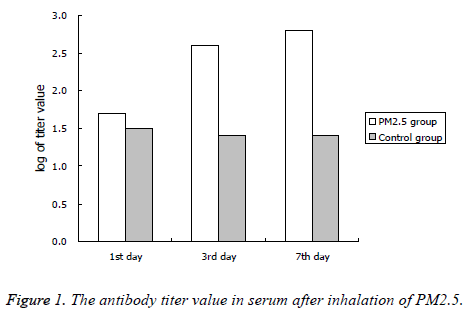 Figure 1. The antibody titer value in serum after inhalation of PM2.5.

Cell counts and classification in BALF 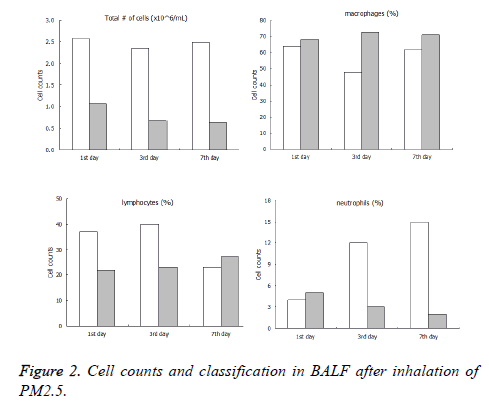 Figure 2. Cell counts and classification in BALF after inhalation of PM2.5.

Figure 3. Cytokines concentrations in serum after inhalation of PM2.5.

Large number of studies has indicated that there is a correlation between the change of atmospheric particulate matterespecially the change of PM2.5 concentration and human respiratory system, cardiovascular disease incidence and mortality. Injury of respiratory system caused by PM2.5 is a complicated pathological process. Previous research shows that the mechanism of PM2.5 toxicity on the respiratory system disease includes: PM2.5 enters lung tissues and interacts with the alveolar macrophages and pulmonary epithelial cells and results in the release of inflammatory factors and change in biochemical components through the adsorption of toxic components of lung tissue, and induces local inflammation, which leads to pulmonary fibrosis. Fine particles possess free radical activity, they contain both metal and organic constituents that stimulate macrophages to generate free radicals [17,19]. Oxygen free radicals activate nuclear regulatory proteins, which produce large amounts of cytokines, causing immune dysfunction.

PM2.5 can generate some pathogenic bacteria via adsorption effect, which adhere to the surface of respiratory tract and form biofilm. The bacteria have antigenicity, previous research results showed that the antibody titers were higher in serum of patients with diffuse panbronchiolitis complicated with PM2.5 infection, and the antibody titer levels are positively correlated with severity of diseases. In this study, when the experimental Wistar rats were treated with inhalation of PM2.5, the antibody titers in the serum are significantly higher than the control group. At the same time, the lymphocytes and neutrophils in BALF of the immune group also increased significantly comparing the control group, obvious inflammatory cell exudation around small respiratory tracts in the immune can be observed while there were no clear changes for the control group. Therefore the local inflammation of respiratory tracts in the PM2.5 fumigated group was stronger than that of the control group, which may be due to inhalation of PM2.5 by the Wistar rats, so that the antibody titers in serum increased rapidly and the occurrence of the antigen antibody reaction with PM2.5, the local inflammatory reaction is very strong compared with the control group. There are many virulence factors of PM2.5, if other pathogenic factors contribute to inflammatory reaction caused by the bacteria needs to be further investigated. However, it was confirmed that when the antibody exists in the body of rats, PM2.5 can definitely lead to lung inflammation, which is similar to the results found by Sigaud [7].

On the other hand, IL-8 in the serum of immunized rats after inhalation of PM2.5 significantly increased, while IL-1β, SICAM-1 and (TNF)-α did not increase dramatically. IL-8 can induce the cell cytotoxicity of natural killer cells and killer cells activated by lymphokine it can also induce the transformation of TH1 cells from CDT cells, which plays an important function in the pathogenesis of infectious diseases. In infectious diseases, excessive production of IL-8 will produce septic shock syndrome, or induce immune pathological reaction. In this study, when PM2.5 fumigated rats inhaled PM2.5 bearing bacteria, IL-8 probably increased due to the antigen antibody reaction and antibody on the surface of respiratory tract, the mechanism of this needs to be further investigated. As a proinflammatory factor, IL-8 can mediate inflammatory reaction, result in exudation of lymphocytes and neutrophils from blood vessels to lung tissues, the neutrophils can release super oxidase, lytic enzymes and other factors which may lead to immune pathological injury of lung tissue.

In summary, the results of current research indicated that the bacteria absorbed onto surface of PM2.5 as an antigen substance mediated the antibody reaction of antigen, which might cause the serious airway inflammatory response and lung tissue injury, this effect may be related to IL-8.

This research was funded by General research program of medical and health in Zhejiang Province (2014KYA081).