Pancreatic pleural fistula due to a pancreatic cyst in a child: A case report

Pancreatic Pleural Fistula (PPF) is a rare complication of acute pancreatitis, chronic pancreatitis or pancreatic pseudocyst in adults. Pancreatic cysts have not been reported to cause PPF. PPF is excessively rare in children and the diagnosis is often delayed as a result of the misleading clinical presentation. We report a toddler suffering from recurrent bloody pleural effusion caused by PPF with a pancreatic cyst. Symptoms recurred frequently when he was given conservative therapy. He was finally cured by cyst jejunum Roux-y anastomosis because the cyst was intimately adherent to the surrounding structures. We recommend that pediatricians should not disregard PPF in patients with bloody pleural effusion even if there are no abdominal symptoms. Early surgical treatment should be considered when conservative treatment fails.

Bloody pleural effusion in children can be caused by tuberculosis, empyema, malignant tumors, connective tissue disease, pulmonary embolism, etc. [1]. Pancreatic Pleural Fistula (PPF) is an uncommon cause of bloody pleural effusion in children. The diagnosis is often delayed as a result of the misleading clinical presentation because respiratory rather than abdominal symptoms predominate. No previous reports have been published on pleural effusion caused by PPF with a pancreatic cyst. Here, we reported a rare case of a toddler diagnosed with PPF with a pancreatic cyst.

A 20-month-old boy was admitted to the emergency department because of cough and tachypnea. His parents had noticed that he presented with a mild unproductive cough and occasional tachypnea that was aggravated by exercise one month prior to hospitalization. Two days before admission, cough frequency and severity increased and symptoms rapidly progressed to the point where he presented with severe shortness of breath and fever. At this point, his mother decided to seek medical help.

His life history showed that he was a healthy toddler with normal development and growth. The pregnancy and birth were uncomplicated. The child did not have any known contact history with tuberculosis patients and had been vaccinated with a Bacillus Calmette-Guerin (BCG) vaccine. Four months before he was admitted, the child had fallen down the stairs from the second floor.

Physical examination showed that his body temperature was 37.7°C, his respiratory rate was 64 bpm, his heart rate was 152 bpm, his blood pressure was 92/64 mmHg, and his oxygen saturation was 98% (with 2 L/min of oxygen nasally); a decreased breathing sound and dullness on percussion were noted in the right lung. The abdominal examination was normal. Thoracentesis was performed and a bloody pleural effusion was obtained; the effusion had 210000 RBC/mm3, 216 WBC/mm3, 70% neutrophilic granulocyte, 23.6 U/L Adenosine Deaminase (ADA), and 418 U/L Lactate Dehydrogenase (LDH). Pleural fluid cytology was negative for malignant cells, and the pleural fluid culture was negative. Levels of amylase in pleural fluid (5100 IU/L), serum (1026 IU/L; normal 30-110 IU /L) and urine (1300 IU/L; normal 32-641 IU/L) were elevated. A chest X-ray showed bilateral pleural effusion (Figure 1). Chest Computerized Tomography (CT) showed a pulmonary infection with bilateral pleural effusion. In addition, ultrasounds of the chest and abdomen showed fluid surrounding the pancreas (pancreatic pseudo cyst) and bilateral pleural effusion. A contrast-enhanced CT image showed a 62 mm × 51 mm low-density irregular cystic mass at the tail of the pancreas that ranged from the esophageal hiatus to the posterior inferior portion of the diaphragm; it was concluded that this mass was a pancreatic pseudo cyst at the tail of the pancreas with PPF. A diagnosis was made including PPF, pulmonary infection with pleural effusion and a pancreatic pseudo cyst. Endosonography-guided drainage of the cyst was performed, and brown-yellow cyst fluid was exuded. The drained cyst fluid culture was negative. Then, the patient was treated with somatostatin, given total parenteral nutrition and anti-infection therapy. Twenty-eight days after treatment, the patient received a nasojejunal feeding tube and was given milk for 25 days. Cough, shortness of breath, and bilateral pleural effusion disappeared, and the child was discharged from the hospital. 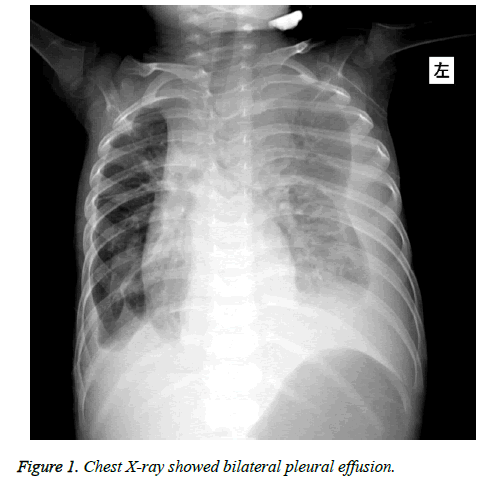 From then on, the symptoms recurred at intervals of one month. Three months after his second discharge, when the fourth recurrence developed, he was readmitted to the hospital at the age of 28 months. A retrograde cyst drainage tube demonstrated a large cystic density above the pancreas when the contrast agent was infused through the diaphragm into the mediastinum; in conclusion, the diagnosis of a pancreatic pseudo cyst was made (Figure 2). Then, cyst jejunum Roux-Y anastomosis was performed. Recurrent infection caused the cyst to be intimately adherent to the surrounding structures, preventing removal of the cyst; therefore, internal drainage was performed. The child was discharged at day 11 after surgery. Histologically, the cyst was lined with pseudostratified columnar epithelium and acini and surrounded by a layer consisting of smooth muscles, fibrous connective tissue and adipose tissue. According to the pathology, a pancreatic pseudo cyst was excluded and a true pancreatic cyst was considered. The diagnosis of PPF and a pancreatic cyst was made. 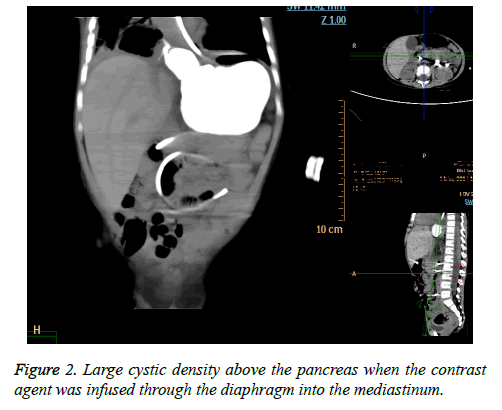 Figure 2: Large cystic density above the pancreas when the contrast agent was infused through the diaphragm into the mediastinum.

After surgery, no pleural effusion was detected and no abnormalities were found at the child’s 1 year follow-up appointment (Figure 3). 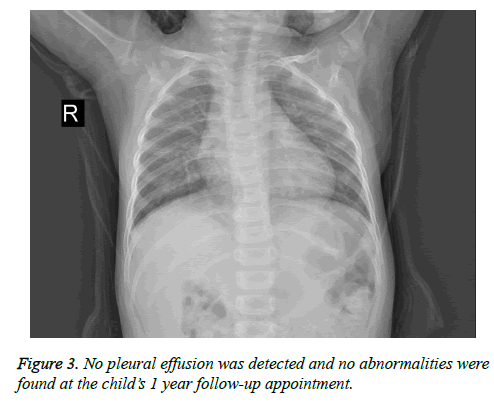 Figure 3: No pleural effusion was detected and no abnormalities were found at the child’s 1 year follow-up appointment.

In children, bloody pleural effusion is primarily caused by tuberculosis or empyema and is also found in the lung, pleural malignant tumor tissue, connective tissue disease, pulmonary embolism, etc. [1]. The pancreatic source of bloody pleural effusion in children is very rare [2]. In normal circumstances, pancreatic secretions drain into the duodenum through the pancreatic duct. If the pancreatic fluid does not drain into the duodenum but instead is transported into the body cavity, it is called an internal pancreatic fistula. It is considered that the occurrence of a pancreatic fistula is caused by stenosis and rupture of the main pancreatic duct and leakage of the pseudo cyst [3]. Generally, most of the pancreatic secretions drain into the mediastinum via the esophageal hiatus, aortic hiatus and inferior vena cava hiatus. In addition, the fluid could spread into the retrocrural space by penetrating the left diaphragm [4].

PPF occurs in 0.4% of patients with pancreatitis and 4.5% of patients with pancreatic pseudo cysts. However, for children, pancreatic diseases are rare and the exact incidence of PPF is not known. Chronic pancreatitis is often a result of alcohol abuse in adults; biliary duct obstruction constitutes the major etiological factor in children. Only a few congenital malformations have been reported; these include congenital pancreatic outflow obstruction and pancreatic separation [5]. Trauma contributes 0.5% of cases. Pancreatic fistula with a pancreatic pseudo cyst accounts for approximately 69% of all cases in adults. However, in children, nearly all of the cases reported were associated with pancreatic pseudo cysts [6]. This boy’s PPF began after a fall from the second floor; initially, we assumed that the disease was caused by pancreatic injury as a result of the lack of strong abdominal muscle protection in the child. Ordinarily, when a pancreatic duct disruption occurs, it is during an attack of acute pancreatitis when there is a sufficient inflammatory reaction so that the disruption is walled off by the stomach, transverse colon, transverse mesocolon and other surrounding tissues, and a pseudo cyst is formed [7]. When a duct disruption occurs in the absence of acute pancreatitis, the duct disruption is not walled off or is only incompletely walled off, and an internal pancreatic fistula results [7]. However, abdominal ultrasonography and CT did not detect pancreatic and/or biliary tract malformation, and pathological analysis confirmed a pancreatic cyst that was the cause of PPF. Therefore, trauma from the fall may have been the cause of the rupture of the cyst.

The symptoms in PPF include respiratory difficulties, chest pain and bloody pleural effusion. Only a small portion of patients suffer from abdominal pain. The most common symptom is dyspnea, accounting for 65-67% of the reported cases [8,9]. Because of the misleading predominance of thoracic symptoms over abdominal symptoms, there is often a delay in diagnosis or misdiagnosis and therefore inappropriate treatment of the respiratory system. Proper diagnosis of PPF is important in cases of recurrent bloody pleural effusion, weight reduction, and amylase increases in pleural effusion. However, acute pancreatitis, esophageal perforation, pleural effusion, and pulmonary or pancreatic cancer should be eliminated.

CT, ERCP and MRCP are most widely used in current practice, and the sensitivity of each modality in detecting PPF is 47%, 78% and 80%, respectively. CT is very valuable for the diagnosis of this disease and for concurrently identifying the pleural effusion and mediastinal pseudocysts and whether an existing pancreatic pseudocyst is present and displaying the part of fistula. Endoscopic Retrograde Cholangiopancreatography (ERCP), which can clearly show pancreatic damage and fistula, used to be the preferred method of investigation for confirming the diagnosis of PPF. Magnetic Resonance Cholangiopancreatography (MRCP) is a non-invasive procedure compared to ERCP and has superiority over CT in that it can directly show the relationship between the pancreatic duct and fistula by clearly showing the base position of a pancreatic cyst and fistula [10]. The cyst was confirmed by contrast-enhanced CT eight months after his first exam; retrograde radiography via the cyst drainage tube was performed before surgery, clearly showing the position of the cyst and fistula.

Conservative treatment of PPF is aimed at suppressing pancreatic activity to promote the resolution of the pleural effusion and closure of the fistula, including pleural effusion drainage, parenteral nutrition and somatostatin analogue. If the persistence of pleural effusion continues beyond three weeks or the patient has signs of superinfection, surgical therapy should be used. One report showed a case of a 4-year-old child who was cured by placement of stents via ERCP, whereas other reports indicate that early surgical treatment is beneficial to improve the treatment effect of patients. King et al. reviewed literature from 1970 to 2008 including 63 patients with pancreatic fistula and found that operative treatment was successful more often than medical therapy (94% vs. 31%, respectively) [11]. However, others believe that endoscopic treatment of transpapillary stents or NPD (nasopancreatogram) placement should be the therapy of choice for patients with PPF and surgical repair should be reserved for patients who fail endoscopic therapy [12]. In the case presented in this paper, conservative treatment was considered first. The boy was treated with catheter drainage and medical therapy. At first it was effective, but after discharge, the boy suffered several infections. Finally, the child underwent surgery. In most cases, the body and tail of the cyst can be removed, but in this case, recurrent infection caused adhesion of the cyst and the cyst could not be removed. Fortunately, long term clinical follow up showed that the patient had sufficient recovery. Therefore, in cases in which patients do not recover well after conservative treatment, it may be necessary to carry out surgical treatment as soon as possible.

PPF can be caused by a pancreatic cyst. We recommend that pediatricians should not disregard PPF in patients with bloody pleural effusion even if there are no abdominal symptoms. CT of the chest and abdomen can be used; however, ERCP is the gold standard for diagnosis of PPF. Because of its non-invasive character, MRCP examination should be considered in children. When conservative treatment fails, surgical treatment should be considered as soon as possible. 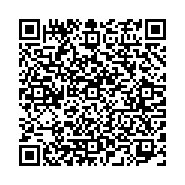