Background: Hypoalgesia has been identified in patients with DM and hypertension. In addition, endogenous opioid system has been proven to be activated during myoischemia. The aim of the study was to test if pain scales could enhance the diagnostic accuracy of CAD.

Conclusions: These findings suggest that low pain scales can enhance diagnostic accuracy in patients with symptomatic chest pain suspicious of MI or with positive stress tests. NSR was the best pain scale among these three for enhancing diagnosis of CAD.

Hypoalgesia, a decreased sensitivity to painful stimuli, occurs when nociceptive (painful) stimuli are interrupted or decreased. It is noted in patients with DM (as a Coronary Artery Disease (CAD) equivalent) [1-4] and hypertension (one of major risk factor for CAD) [5], and it can be mediated by some chemicals such as opioids. The endogenous opioid system consists of 3 three opioids, beta-endorphin, enkephalins, and dynorphins, and 3 families of receptors, μ (MOR), δ (λ, DOR), and κ (KOR). The endogenous opioid system including beta-endorphin and opioid receptors is being activated and increased during myoischemia [6-11]. The CAD is reported to be the most common type of heart disease, which is the leading cause of death for both men and women. (CDC, NCHS. Underlying Cause of Death 1999-2013 on CDC WONDER Online Database, released 2015.). Chest pain is a common complaint in patients, with one of the relevant causes being coronary artery disease. While many studies were focused on how to differentiate what patterns of chest pain responsible for CAD relevant chest pain in the past [12-14], it is interesting and is a reverse thinking to find out if the sensitivity to painful stimuli is helpful to improve the diagnostic accuracy of CAD. Since little is known about the influence of pain assessment for CAD prediction, the aim of the study is to test the pain scales on the diagnostic accuracy of CAD in patients with symptomatic chest pain.

Study populations and the protocol

In total, 249 patients with symptomatic angina pectoralis with positive findings in stress tests, treadmill and Th-201 SPECT studies, or with suspicion of myocardial infarction, were prospectively enrolled for coronary angiography. All diagnostic coronary angiography procedures were performed percutaneously via the left trans-radial approach, and pain scales including the numerical rating, verbal rating, and visual analogue scales were assessed immediately following the procedures. After being verified by angiography, patients were allocated into CAD and Non-CAD groups respectively. This study was approved by the Institutional Review Board at Kaohsiung Medical University Hospital (Approval No. KMUHIRB-E(I)-20150178). The flow of the cohort is outlined in Figure 1. 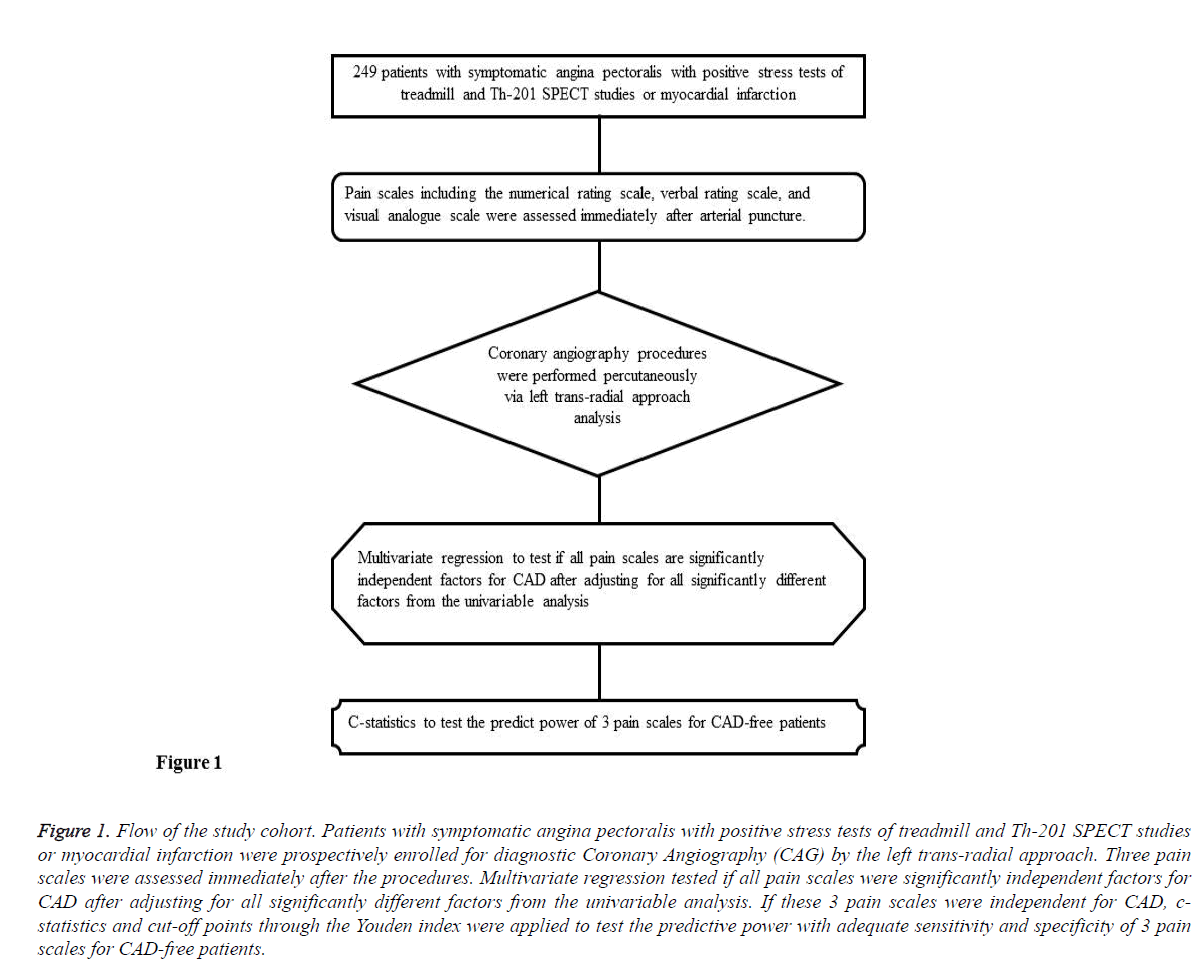 Figure 1: Flow of the study cohort. Patients with symptomatic angina pectoralis with positive stress tests of treadmill and Th-201 SPECT studies or myocardial infarction were prospectively enrolled for diagnostic Coronary Angiography (CAG) by the left trans-radial approach. Three pain scales were assessed immediately after the procedures. Multivariate regression tested if all pain scales were significantly independent factors for CAD after adjusting for all significantly different factors from the univariable analysis. If these 3 pain scales were independent for CAD, cstatistics and cut-off points through the Youden index were applied to test the predictive power with adequate sensitivity and specificity of 3 pain scales for CAD-free patients.

The Numerical Rating Scale (NRS) used a scale of 1-10 to assess the degree of pain; the Verbal Rating Scale (VRS) of 0-3 was determined by patients’ subjective responses in the words “no”, “mild”, “moderate”, and “severe” in referring to pain intensity; and the Visual Analogue Scale (VAS) was based on patients’ marks on a horizontal 10 cm line indicating their pain intensity, in which 0 indicated “no pain” and 10 indicated “worst pain” [15] (Figure 2). 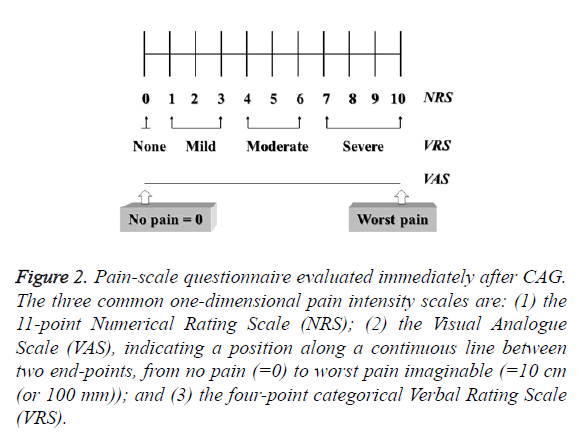 Demographic and clinical data were presented as mean ± SD. Categorical variables were compared using contingency tables (Pearson chi-square test) and continuous variables using student t-test. Spearman’s correlation coefficients were calculated. Multiple logistic regression analysis with Odds Ratios (ORs) and 95% Confidence Intervals (CIs) were calculated to evaluate the independence property of the association between CAD and pain scales. The discriminatory capacity of the risk scores were assessed by using AUC (cstatistic) as an index of model performance [16] and optimal cut-off points by maximal values of Youden index (Youden index=sensitivity+specificity-1) between pain scales and CAD. The c-statistic reflected the concordance of predictions with actual outcomes in rank order, with a c-statistic of 1.0 indicating perfect discrimination. The P value<0.05 was considered statistically significant. Statistical analysis was performed by SPSS 12.0 software (Chicago, IL, USA).

The demographic and clinical characteristics at baseline of the study patients are summarized in Table 1. The traditional atherosclerotic risks including male gender, concomitant diabetes, End-Stage Renal Disease (ESRD), dyslipidemia, and habit of cigarette smoking were significantly higher in patients with CAD.

Table 1: The baseline characteristics of patients with CAD and Non-CAD.

All pain scales, including NSR, VRS and VAS were significantly lower in patients with CAD, and all showed significant negative correlations with CAD. To the best of our knowledge, this is the first study to investigate the pain scales on improvement of diagnostic accuracy of CAD. It validated that low pain scales could further enhance CAD diagnostic accuracy in patients with symptomatic chest pain of suspicion of MI or with positive stress tests. The optimal cut-off points (sensitivity/specificity) of pain scales were 3.25 (0.74/0.75) in NSR, 1.5 (0.69/0.79) in VRS, and 4.25 (0.68/0.78) in VAS. In addition, these three pain scales improved c-statistics for CAD prediction from 0.50 to 0.73~0.75. All pain scales were significantly associated with CAD after adjusting for risk factors including age, gender, DM, hypertension, smoking, dyslipidemia, and ESRD. The ORs of these 3 scales were almost double or even more than doubled compared to other risk factors. Compared to NSR>3.25, NSR ≤ 3.25 was the strongest predictor among these pain scales for CAD (OR, 8.291; 95% CI, 4.227~15.981, p<0.001). In addition, these pain scales might be independently helpful in differentiating multivessel disease (MVD) from single-vessel disease (1VD).

Wide variations in the sensitivity and specificity of treadmill testing have been reported in the related literature. In a largescale analysis, the reported sensitivities ranged from 23-100% (mean, 68%), and the specificities ranged from 17-100% (mean, 77%) [17]. Dipyridamole-thallium testing has a reported sensitivity of 67-95% (mean, 86%) and a specificity ranging from 41-100% (mean, 71%) [17,18]. Our study showed a gain of 68%-74% in sensitivity and 75%-78% in specificity on top of these stress tests including treadmill and dipyridamole-thallium tests (Table 3). In addition to the estimation of CAD risks (Table 4), physicians can also easily estimate the risk of MVD through the pain scale assessments (Table 5). The sensitivity was relatively lower in treadmill testing in the women’s group [17], and our study results provide a solution for this discrepancy (Table 3).

The possible mediator for low pain scales in CAD is the activated endogenous opioid system through increased betaendorphin and opioid receptor activations in the situation of myoischemia [6-11]. In addition to generalized hypoalgesia to visceral and somatic stimulations mechanism [19], competitive inhibition from visceral nociception transmitted through sympathetic afferent fibers entering the dorsal root ganglions might compete with and reduce peripheral painful stimuli intensity [20-23]. This competitive inhibition has been verified and used in a reverse way for many clinical neuromodulation therapies, such as acupuncture, spinal cord stimulation, and transcutaneous electrical nerve stimulation, and all of which have been proven to reduce symptoms of visceral pain induced by angina pectoris [20,23-25] by competing against the visceral nociception inputs.

Factors such as concomitant DM, smoking habit, and male gender were significantly higher in patients with CAD in our study, which are also major CAD risk factors documented in previous studies [26-28]. From the viewpoint of these risk factors, hypoalgesia has been documented in patients with DM (CAD equivalent) [1-3]. In addition, smoking is an important source of acrylamide exposure, which is a possible cause of hypoalgesia by interrupting inputs from demyelinating and axonal changes in peripheral nerves [29]. Current human findings regarding gender differences in experimental pain indicate greater pain sensitivity among females as compared with males for most pain modalities and hypoalgesia [30-34]. This advantage of higher pain sensitivity in female population led to a greater pain test sensitivity in our study that compensated for the relatively low sensitivity in treadmill testing.

This is the first study to unveil the lower pain in patients with myoischemia through assessment of the pain during arterial puncture procedure. The low-pain scale improved the diagnostic accuracy of CAD in patients with symptomatic chest pain suspicious of MI or with positive stress tests; consequently, it would also assist physicians in being aware of the possibility of MVD. NSR value of 3.25 presents as the best cut-off point for predicting the risk of CAD.

The authors thank the volunteers and staff who participated in this study.

No potential conflicts of interest relevant to this article were reported.

The authors, Dr. Kai-Chun Cheng and Dr. Kai-Yuan Cheng, participated in generating original ideas, in study design and analysis of data, in drafting of the manuscript, in revising it critically for important intellectual content and in final approval of the manuscript submitted. All the authors were involved in 1) making substantial contributions to conception and design, or acquisition of data, or analysis and interpretation of data; 2) drafting the article or revising it critically for important intellectual content; and 3) reviewing and providing final approval of the version to be published. Kai-Chun Cheng and Kai-Hung Cheng wrote the manuscript, researched data and held the meetings for discussion. Kai-Chun Cheng and Kai-Hung Cheng (guarantors) take responsibility for the content of this article.