Malignant glioma is the most common primary brain carcinoma and presents poor survival rate in the world, which is characterized by the appearance of vascular proliferation, aggressive invasion, and necrosis around human normal brain tissues [1-3]. Glioblastoma are the most common and lethal primary tumors of the central nervous system due to strong invasive and heterogeneous nature as well as resistance to multimodal treatments of anti-cancer drugs [4,5]. Glioblastoma exhibits a poor prognosis despite maximal multimodal therapy and the median survival of most patients is less than one year after application of multimodal therapies [6,7]. Therefore, understanding potential mechanism glioblastoma of growth and proliferation contributes to analyse signal pathway and explore more targets for the treatment of glioblastoma.

Paclitaxel is a tricyclic diterpene compound that loaded biodegradable poly-(DL-lactic-co-glycolic) acid (PLGA) foams with microporous matrix [8]. Paclitaxel presents better therapeutic effects for human cancer, such as ovarian cancer and breast cancer, lung cancer, colorectal cancer, melanoma, head and neck cancer, lymphoma, as well as brain tumors [9-11]. Woo et al. have paclitaxel can induce apoptotic cell death in human glioblastoma U87MG cells via regulation of apoptotic functions of p53 and c-Jun N-Terminal Kinase [JNK] [12]. In addition, human CD14+ cells loaded with paclitaxel inhibit glioblastoma cells proliferation in vitro, which suggest that Paclitaxel could be used to delivery anti-cancer immunotherapy drugs to kill glioblastoma cells [13]. Furthermore, Merighi et al. have suggested that paclitaxelinduced apoptosis through regulation of the extracellular signal-regulated kinase 1/2 activities, which is able to modulate Bad phosphorylation [11]. However, MMP-9-meidated p38/JNK signaling pathway in growth and proliferation mediated by Paclitaxel has not been investigated in the progression of glioblastoma.

This analysis was performed by the recommendations in the Guide for the Care and Use of Laboratory Animals. All animals’ protocols and animals were performed in accordance with National Institutes of Health and approved by Committee on the Ethics of Animal Experiments Defence Research.

Total RNA was extracted from U251 and U87MG and the identified RNA was applied to the cDNA synthesis by reverse transcription PCR. One-tenth of the cDNA was used to fluorescent quantitative RT-PCR by using iQ SYBR Green System. Relative multiples of change in mRNA expression was calculated by 2-ΔΔCt. The results are expressed as the n-fold difference relative to normal β-actin control.

Specific pathogen-free male Balb/c mice were purchased from Slack co., LTD (Shanghai, China). Nude mice were subcutaneously implanted U251 (106) or U87MG (106) into experimental mice. Mice were divided into two groups (n=30). Treatments were initiated on day 6 after tumor implantation (diameter: 5-6 mm). Tumor-bearing mice were intravenously injected paclitaxel (10 mg/kg) with PBS as control. The treatment was continued 9 times once time a day. The tumor volumes were calculated to access the efficacy of Paclitaxel for tumor inhibition according to previous study [14].

All date were expressed as mean ± SD of triplicate dependent experiments and analysed by using student t tests or one-way ANOVA (Tukey HSD test). All data were analysed using SPSS Statistics 19.0 and Graphpad Prism version 5.0 with the help of Microsoft Excel. *P<0.05 and **P<0.01 were considered statistical differences.

Paclitaxel inhibits growth and proliferation of glioblastoma cells in vitro 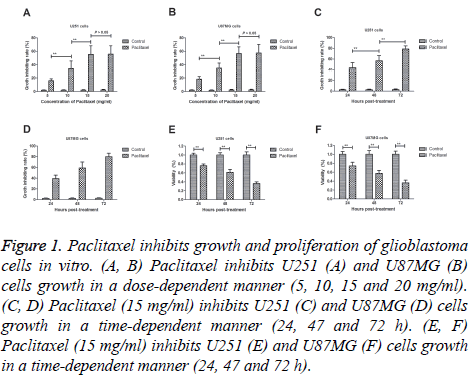 We analysed the efficacy of Paclitaxel on inducing apoptosis of glioblastoma cells. As shown in Figures 2A and 2B, Paclitaxel (15 mg/ml) significantly induced apoptosis of U251 and U87MG cells. Western blot demonstrated that showed that Paclitaxel treatment down-regulated anti-apoptosis gene Bcl-2 and Bcl-w expression and up-regulated of pro-apoptosis gene Bad and Bax expression levels in U251 and U87MG cells in vitro (Figures 2C and 2D). These results suggest that paclitaxel can significantly induce apoptosis of glioblastoma cells in vitro. 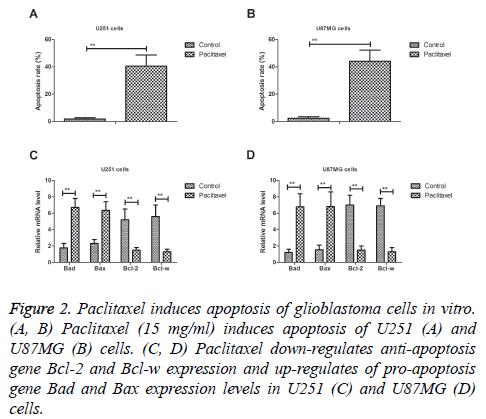 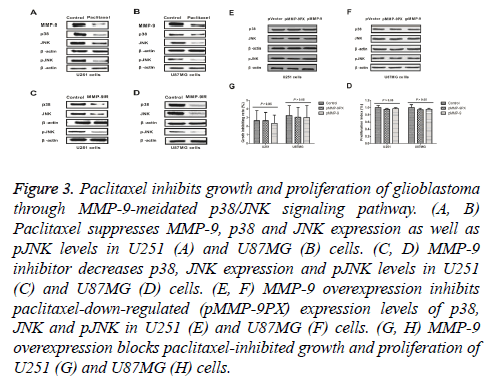 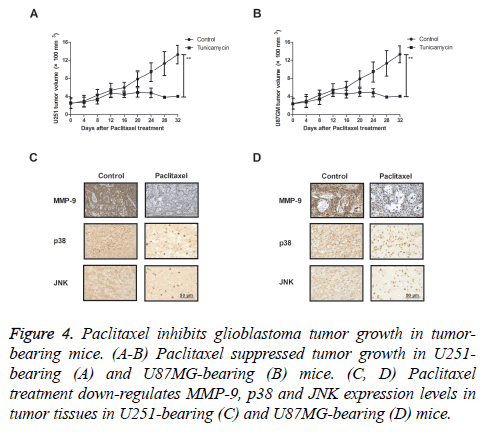