Chronic renal failure is accompanied by oxidative stress, which is caused by reactive oxygen species and impaired antioxidant defense. In this study we investigated oxidative stress in chronic renal failure patients. In the present study, 150 CRF patients and 50 healthy controls matching age and sex were included. We have estimated serum lipid peroxidation, serum superoxide dismutase, serum nitric oxide and serum homocysteine in different stages of CRF and healthy individuals. Af-ter 12 hours overnight fasting blood samples were collected taking aseptic precautions in plain bulbs. The statistical method used to compare the data was ‘Z’ test. The results show that the mean levels of serum lipid peroxidation and serum homocysteine was elevated (P<0.001, P>0.05) elevated in different stages of CRF as compared to that of controls. The activity of serum superoxide dismutase and nitric oxide were reduced (P<0.001, P>0.05) in CRF as compared to that of controls. These parameters may be impor-tant with respect to the high morbidity and mortality of cardiovascular disorder found in patients with chronic renal failure.

Reactive oxygen species (ROS) are intermediary metabo-lites that are normally produced in the course of oxygen metabolism [1]. Oxidative stress defines an imbalance between formation of ROS and antioxidative defence mechanism. In view of the profound biological effects of ROS, in recent years numerous clinical and experimental studies focused on detection of signs of oxidative stress in renal failure patients [2].

It is accepted that patients with advanced CRF have greater risk for the development of atherosclerosis and associated morbidity and mortality [3]). In addition, re-cent evidence suggest that this process of cardiovascular damage start very early during progression in well-defined CRF, long before end-stage renal disease is de-veloped [1]. In this context, we thought it worthwhile to study the potential role of oxidative stress in the patho-genesis of atherosclerosis and other alterations in CRF [4].

Hyperhomocysteinemia was first related to renal failure in 1997 by Cohen et al. [5]. As with other amino acids, the healthy kidney has a high capability to filter, reabsorb and metabolize homocysteine. In addition to the filtered load, homocysteine uptake may also occur on the basolateral tubular cell surface, which means that kidneys play a pri-mordial role in homocystine handling. Uremic patients have high mortality rate of 9% per year attributable mainly to cardiovascular disease, which is 30 times the risk in the general population [6]). This risk cannot be explained only by the conventional cardiovascular risk factors. Hyperhomocysteinemia may be one of the risk factors in chronic renal diseases.

With a view of understanding the potential role of oxida-tive stress in the pathogenesis of atherosclerosis and other alterations in CKD, the present study was undertaken. We planned to determine the levels of homocysteine the risk factor for cardiovascular events, the levels of lipid per-oxidation as a marker of oxidative stress and the activity of SOD, the antioxidant enzyme required for scavenging the OFR and nitric oxide the parameter concerned with endothelial function in chronic renal failure patients.

In the present study, 150 CRF patients and 50 healthy controls matching in age and sex were included. The patients were attending OPD or admitted in nephrology ward and renal intensive care unit of Wanless Hospital Miraj , Bharti Vidyapeeth University Medical College, Hospital Sangli and Government Medical College and Hospital Miraj. The patients were selected on the basis of their estimated glomerular filtration rate (eGFR). According to National Kidney Foundation guidelines, the stages of CRF varied between 1 to 5 depending on eGFR [7] and eGFR was determined by using MDRD equation dis-played on Table 1.

Table I: Classification of CRF Patients according to eGFR

Upon inclusion of the patients, a record was made of all current medications being taken, risk factor for cardiovas-cular disease, current and historic relevant data by means of a written evolution and the database of clinical history was updated. The patients who are willing to participate with informed concent were included in the present study. Terminally ill patients, non co-operative, non willing pa-tients and patients with multiorgan involvement were ex-cluded in this study.

8-10 ml of blood from each patient was collected in plain bulbs taking aseptic precautions. Separated sera were processed for the assay of biochemical analytes. Lipid Peroxidation was measured as MDA in serum by the method of Kei Satoh [8]). The colour produced by the reaction of thiobarbituric acid with MDA was measured at 530 nm with the help of spectrophotometer. The results were expressed as nmol/ml. Superoxide Dismutase was assayed by the method of Marklund and Marklund [9] modified by Nischal HK et.al [10]. This method is based on the ability of superoxide dismutase to inhibit autoxida-tion of pyrogallol under specific conditions. Spectropho-tometric readings were taken at 420 nm and expressed as units/ml. Nitric Oxide was assayed by the method of Na-jwa K.Cortas and Nabil W. Wakid by cadmium reduction method and colour complex produced was measured at 540nm [11]. Homocysteine was assayed by chemilumi-nescence and results expressed as μmol/l [12]. 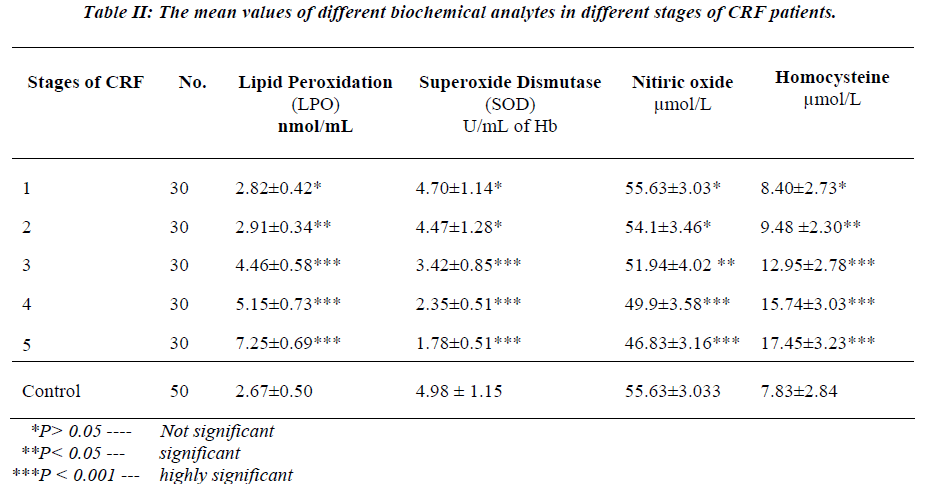 The oxidative-antioxidative system imbalance leads to the pathology called oxidative stress [13]. Oxidative stress occurs when there is an excessive free radical production and/or low antioxidant defence and results in chemical alterations of biomolecules, which cause structural and fuctional modifications. Polyunsaturated fatty acids are oxidized in vivo by free radicals and other reactive spe-cies, subsequent degradation of oxidized lipid molecules leads to the formation of several specific metabolites that include aldehydes of variable chain length, such as malondialdehyde (14) .In our study the mean level of Lipid peroxidation are significantly increased from stage 2nd to 5th in CRF patients. Oxidative stress may play a role in the progression of chronic renal failure (CRF) and in the genesis of atherosclerosis.

Renal sources for ROS are activated macrophages, vascu-lar cells and various glomerular cells. In CRF patients consequences may be aggravated by the concomitant lowering of the patients defence system. The balance be-tween formation of ROS and antioxidative defence mechanisms depends on the activity of enzymes such as superoxide dismutase [14-16]. In our study the stagewise mean activity of superoxide dismutase was significantly reduced from stage 3rd to 5 th in CRF patients. Oxidative stress may lead to impaired activities of endogenous en-zymatic free radical scavengers like SOD.

Nitric oxide (NO) is one of the main factors involved in the antiatherosclerotic effects of endothelium. In our study the mean serum level of Nitric oxide is significantly reduced stagewise from stage 2nd to 5th in CRF patients. We found elevated concentration of serum LPO, which is the marker of enhanced concentration of oxygen radical species that can inactivate nitric oxide in CRF .This is supported by negative correlation found by us, between serum LPP and serum nitric oxide levels in CRF patients. Due to reduced serum SOD activity, the superoxide ion can rapidly react with nitric oxide to form peroxynitrite, a compound with diminished vasodilatory properties [17-18]. Impaired endothelial dependent vasodilatation was also observed in other studies in patients with renal insuf-ficiency [18]).

Another cardiovascular disease (CVD) risk factor is ho-mocysteine [21]. It was also found to be significantly in-creased in a progressive manner for stage 2nd to 5th in CRF. We also found a positive correlation between seum homocysteine and serum LPO levels. Endothelium dysfu-nction and oxidative stress may be responsible for a meta-bolic block distally in transsulfuration route or at the ho-mocysteine remethylation site causing hyperhomocystei-nemia [19-20]. Hyperhomocysteinemia, oxidative stress and endothelial dysfunction may be interrelated, forming a cascade of atherothrombotic processes in CRF.

The present findings allow us to conclude that patients with CRF have reduced activity of SOD, increased level of oxidative stress markers along with homocysteine which can lead to endothelial cell dysfunction and reduc-tion in nitric oxide levels. These factors may be important with respect to the high morbidity and mortality of CVD found in patients with CRF. These parameters can predict severity of CVD associated with CRF and can be used for better control of progression of stages of CRF. As oxida-tive stress and inflammation appear to be important in the pathogenesis of CVD in CRF patients, antioxidant treat-ment strategies could be beneficial. Classification of CRF on the basis of eGFR is important. If CRF patients are classified according to eGFR and biochemical parameters like SOD, LPO, NO● and homocysteine are measured, it will help the clinician to achieve better management.