Increased oxidative stress has been linked with impaired endothelial function in atheroscle-rosis and may play a vital role in the pathogenesis of cardiovascular diseases. This study was designed to evaluate the status of L Arginine, Nitric oxide (NO) and their possible correla-tion with endothelial dysfunction and oxidative stress. The levels of serum Arginine and Ni-tric oxide were measured in normal controls and different groups of Coronary artery dis-ease (CAD) patients before and after regular treatment and after supplementation of oral dose of L-Arginine. We found diminished values of Arginine and NO in various groups of CAD as compared to control. Also no significant change in levels of Arginine and NO were observed on regular treatment. However we optimized increase in the levels of L-Arginine and NO up to control level in the patients subjected to oral dose of L-Arginine along with regular treatment. Thus L-Arginine may be of general benefit to patients with CAD on ap-propriate medical management in correction of endothelial dysfunction and protection from progression of atherosclerosis.

Over the last decades, it has become amply evident that oxidative stress plays a significant role in the pathogene-sis of coronary atherosclerosis and its complication. Vas-cular endothelium at one time was considered merely a monolayer of cells lining the vascular conduit. It has emerged recently as an organ with function as complex as any in the body [1]. The endothelium plays an integral role in the regulation of vascular tone, platelet activity, leukocyte adhesion and thrombosis and is intimately in-volved in the development of atherosclerosis. Endothelial dysfunction has been observed in patients with estab-lished coronary artery disease both in coronary and pe-ripheral vasculature [2].

In the circulatory system, nitric oxide (NO) is vitally im-portant because it regulates the tone of tightly layered cells called endothelial cells. If these endothelial cells be-come dysfunctional, they can cause spasm. One of the major problems in CAD is the predominance of such dys-functional endothelial coronary arteries, which supply blood to the heart muscle. When these arteries become constricted person with CAD can experience angina pec-toris, a heart pain. Only in the last few years have scien-tists discovered that the deficiency of NO in the coronary arteries endothelial cells might contribute to the endothe-lial dysfunction [3]. L- Arginine is the substrate for the synthesis of NO, the Endothelium derived – relaxing fac-tor (EDRF) essential for regulating vascular tone and hemodynamic. As a precursor for synthesis of NO, L- Arginine plays vital role in nutrition and metabolism [4].

An increasing body of evidence suggests that increased oxidative stress accounts for a significant proportion of endothelial dysfunction. Increased production of oxygen – derived free radicals such as superoxide anion has been linked to impaired endothelial vasomotor function in ex-perimental models of atherosclerosis [5-7]. Less informa-tion is available about the prognostic impact of endothe-lial dysfunction and oxidative stress on atherosclerotic disease progression and cardiovascular risk. Very recent observation showed that depressed vasoreactivity is asso-ciated with increased cardiovascular event rates [8,9].

Endothelial dysfunction is a hallmark of atherosclerosis and has been attributed to impair NO bioactivity and en-hanced formation of oxygen derived free radicals. Given that endothelial dysfunction is at least in part reversible, early detection is of important diagnostic and prognostic value provided that an accurate biomarker exists. Identifi-cation of such alternations in NO bio-availability may help in targeting asymptomatic individuals who are at risk for cardiovascular diseases and would likely benefit from preventive measures [10].

Hence from the present scenario we planned to evaluate the status of L- Arginine, nitric oxide and their possible correlation with endothelial dysfunction and oxidative stress.

The present study was carried out in the Department of Biochemistry K.B.N. Institute of Medical Sciences and KBNTGH Gulbarga, and Dr. V.M. Govt. Medical Col-lege and SCSM General Hospital Solapur.

The study included total 140 patients of the age group 40 -66 years suffering from coronary artery disease. The dis-tribution of subjects was as follows.

Group IV: Included 35 patients with established CAD assigned to regular treatment along with supplementation of oral dose of L- Arginine (Non smoker, non diabetic) CAD patients: Angiographically proven patients by the cardiologists with relevant coronary artery disease show-ing > 50% stenoses in at least one major coronary artery at the time of diagnostic catheterization were enrolled in this study. Each subject was screened by a complete his-tory, physical examination and laboratory analysis. Study design for follow up study: Along with regular treatment oral dose of L- Arginine 9gm/day was administered sepa-rately for a period of three months.

Fasting blood samples were collected from the anticubio-tal vein aseptically and the samples were used for the analysis of serum Arginine by Sakaguchi’s reaction method [11] and serum nitric oxide (as nitrite) was esti-mated by the method of Najwa K Cortas [12].

Statistical analysis of the work was carried by using stu-dent’s‘t’ test. Results were expressed as mean + SD. Probability values of P <0.05 were considered to indicate statistical significance. 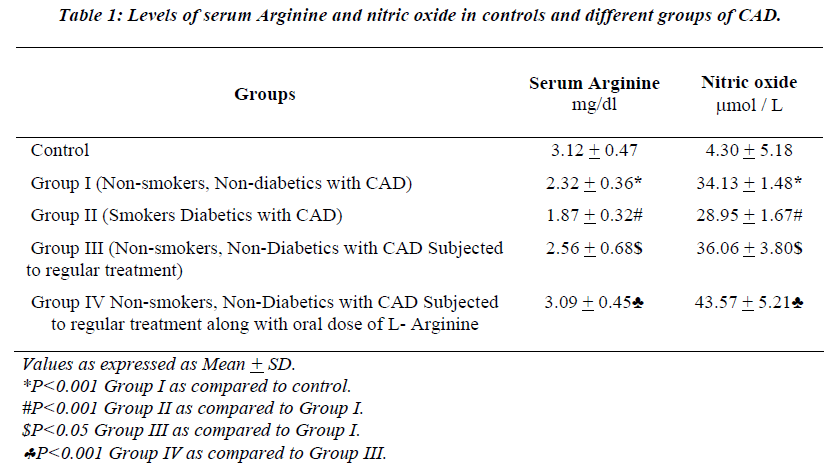 Table 1: Levels of serum Arginine and nitric oxide in controls and different groups of CAD..

Findings of our study clearly indicate that due to oxida-tive stress in CAD there is increased superoxide produc-tion, which may account for a significant proportion of the NO deficit in atherosclerotic vessels. Superoxide re-acts rapidly with NO, thereby reducing NO bioactivity and producing peroxy nitrite, a strong oxidant that can have physiologically protective effects, but that at high levels causes oxidative tissue damage by nitrosylation of

Thus the oxidative stress caused due to generation of O2- leads to vasoconstriction and endothelial function is im-paired in the CAD patients and may play a role in the pa-thogenesis of cardiovascular events. L – Arginine being the precursor of NO is readily utilized to compensate the depleted levels of NO, this leads to the fall in the levels of L- Arginine (Figure 1).

Figure 1: Showing increased generation of superoxide radical due to oxidative stress, which in turn combines with NO to form Peroxynitrite thereby depleting the levels of NO.

Further, significant decrease was observed in the levels of nitric oxide (P<0.001) and serum Arginine (P<0.001) when group II was compared with group I. (Table 1). This suggests that diabetes mellitus and smoking increases oxidative stress, which in turn depletes the levels of L – Arginine and nitric oxide.

During diabetes, persistent hyperglycemia causes in-creased production of free radicals via auto – oxidation of glucose and via non enzymatic protein glycation, which may disrupt cellular functions and cause oxidative dam-age [16]. Similarly smoking also increases the oxidative stress by generation of oxygen – derived radicals and pro-oxidants, and causes endothelial dysfunction in coronary and peripheral conductance and resistance vessels, as well as in veins. [17]

Findings of our study showed significant increase in the levels of nitric oxide (P<0.05) and serum Arginine (P<0.05) in group III patients with regular treatment when compared with group I. But these values failed to reach up to the control levels. (Table 1)

In the present study an attempt was made to investigate the effect of oral dose of L- Arginine along with regular treatment in CAD patients. The principal findings of our study showed highly significant increase (P<0.001) in the levels of serum Arginine and nitric oxide (P<0.001) in group IV patients subjected to oral dose of L-Arginine when compared with group III patients. These values were found close to control level. This indicates that sup-plemental oral L- Arginine increases the levels of NO, thereby improving the endothelium dependant vasodilata-tion.

The improved endothelial function may be a sum effect of increased substrate availability. L- Arginine will compete with molecular oxygen as a substrate for electron transfer and reduce superoxide generation, thereby increasing NO half life.

Tousoulis, et al in their study showed that L- Arginine dilates segments of diseased arteries including stenoses. Their results provide evidence that at the site of stenoses the mechanism of nitric oxide production is intact and therefore stimulation of this pathway might be of thera-peutic benefit in angina patients [18].

Our study clearly indicates that as endothelial Arginine is derived from plasma, intra cellular synthesis of citrulline and net degradation of intracellular proteins, diet is the ultimate source of Arginine in the body. Arginine acts as a substrate for endothelial Nitric oxide synthase (e Nos) and is essential for maintaining the enzyme in the active dimerization state. In the blood vessels, EDNO activates guanylyl cyclase to generate C GMP concentrations and causes smooth muscle relaxation. Thus, NO plays an es-sential role in regulating vascular tone and hemodynamic. NO stimulates endothelial proliferation and angiogenesis, thereby playing an important role in wound healing and microcirculation. In addition NO inhibits the release of endothelin- 1 (a vaso constrictor) by EC, leukocyte adhesion to the endothelium, platelet aggregation, superoxide generation by NADPH oxidase, and the proliferation of smooth muscle cells [17,19].

In conclusion, our study indicates that supplementation of oral L- Arginine increases levels of NO, thereby improv-ing endothelium dependant vasodilatation. The improved endothelial function may be a sum effect of increased substrate availability. Thus we hypothesized that admini-stration of L-Arginine along with regular treatment may correct impaired endothelium dependant vasodilatation and serve as a potentially novel nutritional strategy for preventing and treating cardiovascular disorders.