The risk factors associated with breast cancer may exert their effects via generation of reac-tive oxygen species (ROS) which induces oxidative damage of DNA and neoplastic trans-formation. Estrogen has a role in the development and growth of Breast Cancer. In the pre-sent study we have evaluated the levels of serum malondialdehyde (MDA), estrogen, FSH and LH, vitamin E and vitamin C. All these parameters were estimated in 50 premeno-pausal breast cancer patients before and after chemotherapy and in 30 healthy controls. The results showed that estrogen and MDA levels were significantly increased in patients before therapy but the levels were significantly decreased following therapy (p<0.001). The levels of FSH and LH which were found to be low in the patients before therapy, were elevated after therapy (p<0.001). Antioxidants showed a decreased concentration in patients before ther-apy but their concentrations were significantly increased after chemotherapy (p<0.001). We suggest that oxidative stress in premenopausal women with breast cancer may possibly re-sult from a higher concentration of estrogen with corresponding low levels of antioxidants. Chemotherapy may be useful for premenopausal women with breast cancer because it causes premature menopause which ultimately prevents recurrence of disease. The evaluat-ing parameters used in this study could be recommended for diagnostic and prognostic pur-poses in premenopausal breast cancer patients.

Breast Cancer is a malignant growth of the breast. The global incidence of breast cancer is increasing rapidly and it has been overtaken cancer of cervix in India. Breast cancer is one of the most common cancers in females [1, 2]. The risk factor associated with breast cancer may exert their effects via generation of reactive oxygen species (ROS), such as superoxide, hydroxyl radicals, peroxyl, hydrogen peroxide and hydroperoxide which induce oxidative damage of DNA, and neoplastic transformation [3,4].

Estrogen promotes the development of mammary cancer in rodents and exerts direct and indirect proliferative effects on cultured breast cancer cells from humans. Experimental evidences reveal that reactive oxygen metabolites are involved in the initiation, promotion and progression of carcinogenesis where inactivation or loss of certain tumor suppressor genes occurred [5,6]. Tumor formation may also result from excessive hormonal stimulation of an organ in which normal growth and functions are under endocrine control. The response of an organ to the proliferative effects of the hormone may be a progression from normal growth to hyperplasia and neoplasia. The risk of breast cancer could be determined by the cumulative exposure of breast tissue to estrogen. Indirect evidence of this sequence includes the increased risk of breast cancer associated with early menarche, at full-term pregnancy and late menopause [6]. Considerable data indicate that estrogen plays a major role in the etiology of breast cancer. Breast tumors are frequently hormone dependent and a women's reproductive history affects her risk.

Chemotherapy has long been a cornerstone of cancer therapy. Although extensive research is done on the development of more effective but less toxic antineoplastic agents, yet less attention has been paid to the factors that may enhance the effectiveness of existing drugs. Present study aims to evaluate the role of oxidative stress, and chemotherapy in premenopausal women with breast cancer [7].

The present study was carried out in the Department of Biochemistry, Govt. Medical College and Shri Sidddhivi-nayak Ganapati Cancer Hospital, Miraj. The study protocol was approved by Ethical Committee of Government medical college Miraj.

In the present study we have included 80 subjects, out of which 30 were controls and 50 were premenopausal women with breast cancer. The subjects were within the age group of 23-50 years. They were clinically diagnosed having breast cancer. Thirty healthy female subjects from the same socioeconomic status having no history of smoking habit, alcoholism, or any type of carcinoma were treated as controls. The subjects having history of smoking, alcoholism and other diseases which induce oxidative stress such as diabetes mellitus, pulmonary diseases, respiratory diseases, liver diseases etc. were excluded from the study.

Informed consent was obtained from the patients. Venous blood samples (10 ml each/twice) were collected from the subjects, centrifuged at 3000 revolution per minute for 15 minutes at room temp, stored at 4°C and the serum levels of estrogen, FSH, LH, malondialdehyde (MDA), vitamin E and vitamin C were measured on the same day. First blood samples were collected before therapy and the second samples were taken after therapy. MDA was estimated by measuring thiobarbituric acid in serum according to Kei Satoh. The pink chromogen produced by the reaction of thiobarbituric acid with malondialdehyde (MDA), a secondary product of lipid peroxidation was measured at 530 nm [8]. Serum estrogen, FSH and LH were measured by MEIA on AxSYM [9,10]. Vitamin E was measured as described by Baker and Frank based on reduction of ferric to ferrous ions which then formed a red complex with α dipyridil. It was then extracted and read at 460 nm [11]. Vitamin C was estimated by the method of Ayekyaw [12]. The biochemical data were expressed as mean ± SD. Statisfical significance was determined at P < 0.05 for all tests.

Table 2: Showing biochemical parameters in premenopausal breast cancer patients before and after therapy. 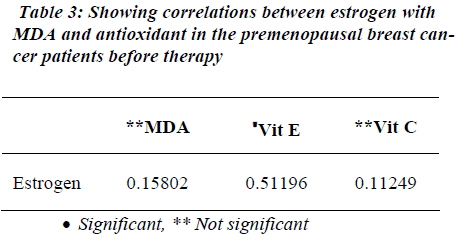 Table 3: Showing correlations between estrogen with MDA and antioxidant in the premenopausal breast cancer patients before therapy

In the present study we observed that the MDA levels were significantly elevated in patients with premeno-pausal breast cancer. Free radicals are constantly produced during the normal oxidation of food stuffs, due to leakage in the electron transport chain in mitochondria. NADPH oxidase in inflammatory cells (neutrophils, eosinophils, monocytes and macrophages) produces superoxide anion by a process of respiratory burst during phagocytosis. When free radicals react with normal compounds, other free radicals are generated. This chain reaction leads to peroxidation of polyunsaturated fatty acids in plasma membrane and finally results in the loss of membrane functions. Lipid peroxidation subsequently produces some degradation products like malondialdehyde which is seen in biological fluids. Almost all of the biological macromolecules are damaged by the free radicals [13]. The improper balance between reactive oxygen species production and antioxidant defenses results in oxidative stress. Oxidative stress causes damage to the DNA and may ultimately lead to carcinogenesis. Therefore, oxidative stress could be one of the possible causes of breast cancer.

Increased levels of estrogen were detected in the patients with premenopausal breast cancer. Estrogen metabolism may serve as a source of oxidative stress and known to increase breast cancer risk [6]. Estrogen is also expressed through receptor-mediated hormonal activity, which stimulates cellular proliferation resulting in more opportunities for accumulation of the genetic damage that led to carcinogenesis.

The mechanism through which vitamin E contributes to anticarcinogenic effects is that it can directly act with a variety of radicals, including peroxylipid and ˙OH [14]. Vitamin C also plays an important role in preventing carcinogenesis. Vitamin C is in a unique position to scavenge aqueous peroxyl radicals before these destructive substances have a chance to damage the membrane lipids. It works along with vitamin E. Non enzymatic antioxidants are either extra cellular or membrane bound. And extra cellular antioxidants remove oxidants outside the cell and membrane bound lypophilic radicals detoxify in the interior of the membrane. This mechanism indicates nonenzymatic antioxidants may be exhausted in the detoxification reactions due to very high oxidative stress. Therefore vitamin E and vitamin C were decreased in premenopausal women with breast cancer [15].

We were also observed derangement in the levels of MDA and estrogen after therapy. Subsequent to the treatment there were decreased levels estrogen and MDA in premenopausal women with breast cancer. Estrogen hormone being known to cause of oxidative stress, decreased in the estrogen levels leads to decrease in oxidative stress. Therefore lipid peroxidation in the form of MDA levels was decreased and increased antioxidants levels after therapy.

In this study we found significant positive correlation between estrogen and vitamin E in before therapy. Tumor formation may also result from excessive hormonal stimulation of an organ in which normal growth and function are under endocrine control. The response of an organ to the proliferative effects of a hormone may be a progression from normal growth to hyperplasia to neoplasia. In this case, the risk of breast cancer could be determined by the cumulative exposure of breast tissue to estrogen. Indirect evidence of this sequence includes the increased risk of breast cancer associated with low concentration vitamin E in premenopausal breast cancer women. Vitamin E deficiency leads to aromatase genetic variations may be associated with an increased risk of breast cancer. Hence there was positive correlation between estrogen and vitamin E.