Oxidative Stress and Antioxidant Status in Patients of Ovarian Cancer

Ovarian cancer has the highest mortality rate amongst all gynecologic malignancies. A major role in its initiation and progression is played by DNA damage, mostly caused by oxidative stress. The presented study was designed to determine whether oxidative stress plays an important role in ovarian malignancy. Serum malondialdehyde (MDA) was measured as an indicator of lipid peroxidation and antioxidant status was assessed by estimating serum vitamin E and erythrocyte superoxide dismutase (SOD) levels. Finally, the status of antioxidants and lipid peroxidation was correlated with the pathophysiology of ovarian cancer. The study comprised of thirty age-matched controls and sixty ovarian cancer patients - thirty patients of stage II and thirty of stage IV, all selected by transvaginal sonography and confirmed by histopathological examination. The results reveal that serum MDA levels were increased, while serum vitamin E and erythrocyte SOD levels decreased, as the disease progressed from stage II to IV. These results suggest that the increased serum MDA levels indicate oxidative stress which may cause DNA damage which is one of the causative factors for cancer. Low levels of vitamin E and SOD could be due to the increased utilization of these antioxidants in scavenging the lipid peroxides, production of which overrides the antioxidant defense leading to increased MDA in serum.

In India, 15% of all gynecological cancers are ovarian malignancies [1]. It has the highest mortality rate amongst all gynecologic malignancies [2,3]. It is a disease of peri-menopausal and post-menopausal women; however no age is exempt from ovarian neoplasm. There is no socio-economic bar for ovarian malignancy but epidemiologically it is more frequent in higher socio-economic and industrially developed countries [4].

Risk factors for ovarian carcinoma include inflammation, excessive number of life time ovulations, increase in steroid hormone levels, infertility, age, asbestos, talc and reproductive factors such as nulli-parity [5].
At the time of diagnosis, over 85% of patients with ovarian cancer present with advanced stage III or IV disease characterized by intraperitoneal, lymphatic, and/or distant spread of disease; the poor prognosis associated with ovarian cancer is attributed to a lack of symptoms at early stages of the disease as well as a lack of biomarkers for the detection of early stage disease. Moreover, despite appropriate surgery and receiving highly effective first-line chemotherapy approximately 20-30% of patients with advanced stage disease continue to have evidence of residual disease during treatment and never have a complete clinical response [6]. Early diagnosis of ovarian malignancy is most important for better prognosis. A high index of suspicion, better screening modalities and recognition of high risk factors help to detect ovarian malignancy earlier [4].

The majority of cancers of the ovary are thought to originate from a surface epithelial cell perturbed by ovulation [9]. Reactive oxidants (hydroxyl radicals, superoxide radicals, hydrogen peroxide, and singlet oxygen) generated during the mechanics of ovulatory follicular rupture, damage the DNA of ovarian surface epithelial cells that are located within limited diffusion radius [10].

Recent molecular studies have shown that ovarian cancer has acquired genetic alterations of oncogenes and tumor suppressor genes such as BRCA1, p53, nm23 and K-ras, which may be due to inflammation and oxidative stress [11].

Mutagenic capacity of free radicals is due to the direct interaction of hydroxyl radicals (OH-) with DNA as it reacts indiscriminately with all components of the DNA molecule. Whereas, superoxide radicals (O2) and hydro-gen peroxide do not directly react with DNA, rather it is the hydroxyl radicals produced after their interaction with transition metals, which are responsible for DNA damage [12]. By contrast, singlet oxygen (1O2) selectively attacks guanine. The most commonly produced base lesion and the most often measured as an index of oxidative DNA damage is 8-hydroxy guanine (8-OHG). Conversion of guanine to 8-hydroxy guanine, a frequent result of reactive oxygen species attack has been found to alter the enzyme-catalyzed methylation of adjacent cytosines, thus providing a link between oxidative DNA damage and altered methylation patterns as methylation of cytosines in DNA is important for the regulation of gene expression [13].

Oxidative stress induces a cellular redox imbalance which has been found to be present in various cancer cells compared with normal cells, the redox imbalance thus may be related to oncogenic stimulation. DNA mutation is a critical step in carcinogenesis and elevated levels of oxidative DNA lesions (8-OH-G) have been noted in various tumors, strongly implicating such damage in the etiology of cancer. It appears that the DNA damage is predominantly linked with the initiation process [14].

The main objective of the study was to see the effect of oxidative stress in causation and progression of ovarian cancer patients. So the study was planned under following aims:

3. To correlate the status of antioxidants and lipid peroxidation in the pathophysiology of ovarian cancer.

The present study comprised of sixty newly transvaginal ultrasonographically diagnosed ovarian cancer patients confirmed by histopathological examination at B J Medical College and Sasoon General Hospital, Pune, Maharashtra, India, ranging in the age group of 50-70 years. Ovarian carcinomas were staged according to the classification of International Federation of Gynaecology and Obstetrics (FIGO) and as the occurrence of patients in stage II and stage IV were common in this hospital, they were included in the study. The controls and subjects were categorized into:

All the patients and controls were free from any other gynaecologic malignancies like breast, cervical, uterine cancer and also any concomitant illness such as diabetes mellitus, cardiovascular disease and liver disease etc. Informed consent was obtained from the ovarian cancer patients and the normal subjects before study. The present study was also approved by the human ethical committee, B J Medical College and Sasoon General Hospital, Pune, Maharashtra, India.

About 5 ml of fasting venous blood was collected with all aseptic precautions in plain bulb. Separated serum was used for measurement of MDA (an index of lipid peroxidation) and vitamin E (an antioxidant vitamin).
About 2 ml of blood was collected in ethylene diamine tetracetic acid (EDTA) bulb. Plasma separated by centrifuging at 2500 revolution per minute for 10 minutes and the erythrocytes washed thrice with normal saline. Afterwards the erythrocytes were lysed with equal volume of distilled water. This haemolysate was used for measurement of superoxide dismutase (an antioxidant enzyme).

Table 1 shows that all the groups were statistically comparable (P>0.05) for the age distribution. 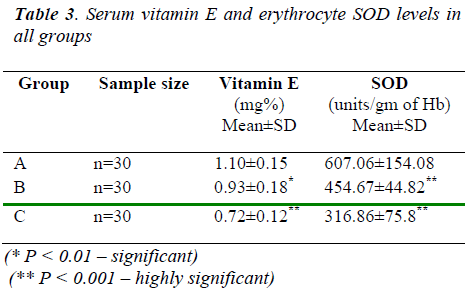 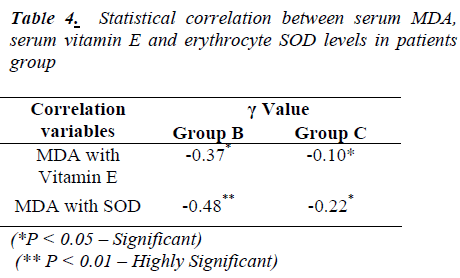 Results of this study were comparable with [20,21].

In present study, the observed increase in circulating lipid peroxides of ovarian cancer patients correlate with the decline in SOD activity. This can result in accumulation of superoxide anion, highly diffusible and potent oxidizing radical capable of traversing membranes causing deleterious effects at site far from the tumor.

Vitamin E (also called as alpha- tocopherol) is the most effective (by acting as a hydrogen donor at its six hydroxyl 6-OH group), chain breaking antioxidant in cellular membranes and thereby contributes to membrane phospholipids stability and safeguards intracellular molecules against damage produced by free radicals [27,28,29]. It is essentially non-toxic. In present study, the decreased levels of serum vitamin E may be due to their increased utilization in scavenging lipid peroxides as well as sequestration by tumor cells [30]. Epidemiology studies support an inverse relationship between circulating levels of vitamin E with ovarian cancer [31,32]. Due to low economic status, women were malnouri-shed and thus more prone to malignancy. Studies indicate that women who consume fewer amounts of fruits and vegetables are associated with ovarian cancer [33]. Thus the enhanced lipid peroxidation observed in ovarian cancer patients can also be attributed to a large extent to the depletion of vitamin E in the diet.

From above discussion, it becomes clear that, thus low levels of SOD and vitamin E in the ovarian cancer patients may be due to increased utilization to scavenge lipid peroxides as well as their sequestration by tumor cells. Increased levels of lipid peroxidation may be due to excessive oxidative stress caused by incessant ovulation or epithelial inflammation initiators such as talc and asbestos which is increased as the disease progresses from stage II to stage IV while levels of antioxidants decreased.

The imbalance between free radicals and antioxidants results in oxidative stress. This plays an important role in causation and progression of ovarian cancer by causing structural alterations in DNA directly or indirectly through the formation of genotoxic lipid peroxidation byproducts that reacts with DNA. This probably leads to lipid peroxidation related carcinogenicity.

Antioxidants (SOD and vitamin E) appear to ease oxidative stress by scavenging reactive oxygen species before they cause damage to the various biological molecules or prevent oxidative damage from spreading e.g. by interrupting the radical chain reaction of lipid peroxidation.

Our findings provide evidence for antioxidants such as vitamin E significantly contributes to antioxidant defense thus vitamin E together with a diet high in vegetables and fruits might reduce the risk of ovarian cancer until more evidence become available.

Inadequate data is available on the antioxidants and lipid peroxidation status in patients with ovarian cancer. Hence additional studies are needed to substantiate these suggestions.