In the present study to investigate cardiac oxidative stress and evaluate the role of oxidant we measured lipid peroxides in terms of Malondialdehye and antioxidants namely total antioxidant capacity (TAC), vitamin C, glutathione peroxidase (GPx) and superoxide dismutase (SOD) in normal controls and different groups of Coronary artery disease patients, before and after treatment and after supplementation of oral dose of A – Z antioxidant tablets along with regular treatment. A significant increase in levels of serum lipid peroxide was observed in various groups of CAD patients when compared to control with concomitant fall in TAC, Vit C, GPx and SOD levels. The levels of lipid peroxides depleted after regular treatment in CAD, but failed to reach the control levels. Similarly the TAC, Vit C, SOD, and GPx, levels increased after regular treatment but the rise was not up to control values. However decrease in serum lipid peroxide and increase in the levels of TAC, Vit C, GPx and SOD up to control levels were found in patients subjected to oral dose of A – Z antioxidant tablets along with regular treatment. Thus the study brings to focus the significant role of antioxidant in inhibiting the oxidation of LDL and preventing initiation of lipid peroxidation in CAD. Hence, a management strategy aiming at reduction of lipid peroxidation in CAD is envisaged.

Coronary Artery disease is the single most important disease entity in terms of both mortality and morbidity in the entire world population. Despite all round efforts in the prevention and management of this disease, it remains a major challenge to the health managers and scientists [1].

Atherosclerosis is the principal cause of cardiovascular diseases leading to angina pectoris, myocardial infarction, and ischemic stroke and is the principal cause of death A constant supply of oxygen is indispensable for cardiac viability and function. However, the role of oxygen and oxygen associated process in the heart is complex, and they can be either beneficial or contribute to cardiac dysfunction and death. As oxygen is a major determinant of cardiac gene expression, and a critical participant in the formation of reactive oxygen species (ROS) and numerous other cellular processes, consideration of its role in the heart is essential in understanding the pathogenesis of cardiac dysfunction [3].

Over the last decades, it has become amply evident that oxidative stress plays a significant role in the pathogenesis of coronary atherosclerosis and its complications. Relative recent studies have demonstrated an association between increased oxidative stress and diabetes, hypertension, cigarette smoking and dyslipidemia, which are well known risk factors for atherosclerosis. Indeed, it appears that oxidative stress both promotes and is induced by vascular diseases and risk factors that lead to vascular disease [4].

In the vascular system, the formation of ROS from endothelial cells, smooth muscle cells and macrophages may be of major relevance in atherogenesis. Under normal conditions, numerous cellular antioxidant systems exist to defend against oxidant stress and maintain the redox balance of the cell. ROS are cleared from the cell by enzymatic systems including superoxide dismutase, catalase, and glutathione peroxidase or the non – enzymatic system including vitamin E, ascorbic acid, and uric acid [5].

However, oxidative stress is developed when there is excessive production of ROS, outstripping endogenous antioxidant mechanisms. The major damage to cells results from the ROS induced alteration of macromolecules such as polyunsaturated fatty acids in membrane lipids, essential proteins and DNA [6].

Hence from the present scenario and controversies the present study is planned to evaluate the role of free radicals and antioxidants in CAD, by estimating the levels of serum lipid peroxides in terms of MDA and both enzymatic (GPx) and (SOD) and non-enzymatic (Vitamin C) antioxidants along with total antioxidant capacity (TAC).

The study was conducted in the department of Biochemistry K.B.N. Institute of Medical Sciences and KBNTGH Gulbarga, and Dr. V.M. Govt. Medical College and SCSM General Hospital Sholapur, India.

In this study a total number of 140 patients of the age group 40 – 60 years suffering from CAD were divided into four different groups.

Group I: – In this group an early diagnosed 35 patients with established CAD were included. These patients were moreover non-smoking and non-diabetic.

Group II: – Included early diagnosed, untreated 35 patients with established CAD who were known to be smokers and diabetic.

Group IV: – Included 35 patients with established CAD (non-smoker and non-diabetic). Along with the regular treatment, patients were assigned to an oral dose of A – Z antioxidant tablets.

CAD patients: – Angiographically proven patients by the cardiologists with relevant coronary artery disease showing > 50% stenoses in at least one major coronary artery at the time of diagnostic catheterization were enrolled in this study. Each subject was screened by a complete history, physical examination and laboratory analysis.

Study design for follow up study: – Along with the regular treatment an oral dose of A – Z antioxidant tablet (1 Tab / Day) was administered separately for a period of three months.

Sample Collection: Fasting blood samples were collected from the anticubiotal vein, aseptically using vacutainer. Following biochemical parameters were investigated from the above sample. Serum total lipid peroxide was estimated by using the method of Satoh [7]. Total antioxidant power was measured as ferric reducing ability of plasma (FRAP) assay of Benzie [8]. Antioxidant power converts ferric to ferrous ion by reduction at low pH and causes a colored ferrous tripyridylthiazine complex. Erythrocyte superoxide dismutase was estimated by the method of Das et al [9]. Superoxide radicals are generated by photo reduction of riboflavin. These radicals are allowed to react with hydroxylamine hydrochloride to produce nitrite. Nitrite in turn reacts with sulphanilic acid to produce diazonium compound, which subsequently reacts with napthylenediamine to produce a red azo compound. Erythrocyte glutathione peroxidase was estimated by using the method of Ransel Kits and Vitamin C in plasma was measured by Caraway’s Method [10].

Data analysis of the work was carried by using student’s t test. Results were expressed as mean ± SD. Probability values of P < 0.05 were considered to be statistically significant. 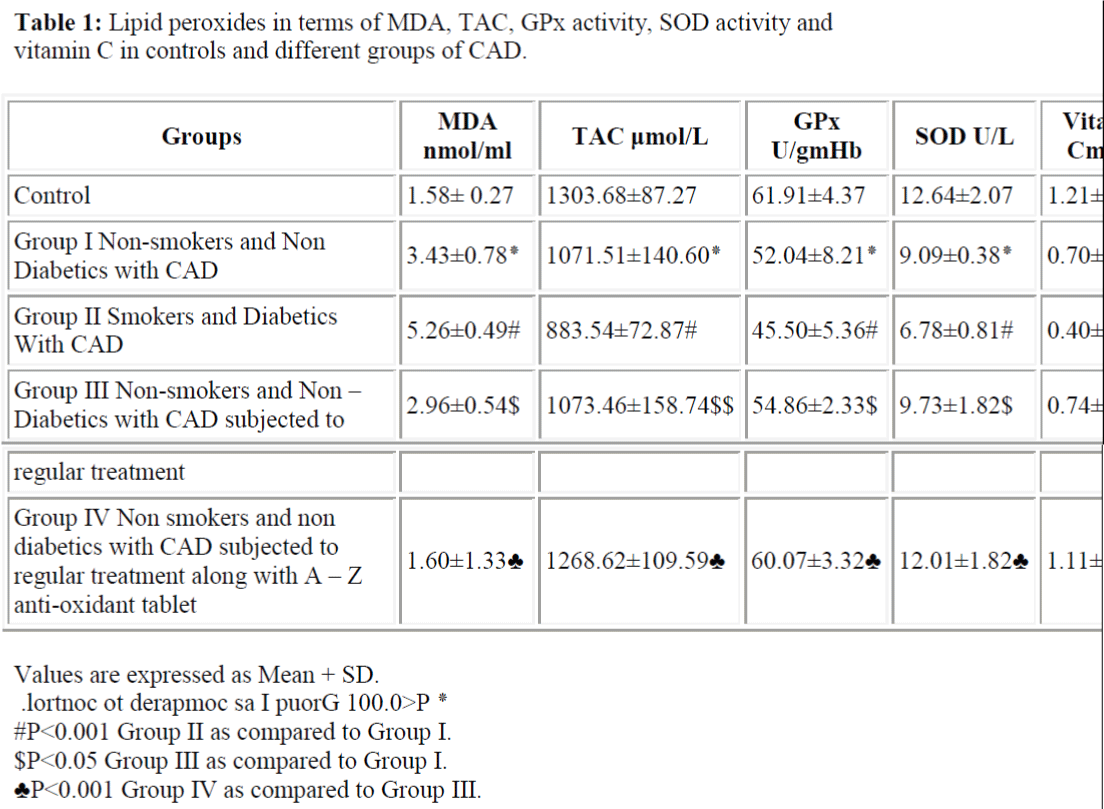 Medical advancements made over the past decade have resulted in a greater ability to detect and treat atherosclerotic disease. Despite these medical advances, cardiovascular disease originating from atherosclerosis inflicts a large burden in terms of life expectancy, quality of life, and societal cost. There is, therefore a need for a novel pharmacological intervention that would provide further cardiovascular protection in patients with atherosclerosis, over and above the protection offered by other medications available.

In the present study the levels of lipid peroxide were significantly increased (P<0.001) in patients with CAD as compared to control. Our results are consistent with other workers [11,12]. Sakuma et al [13] proposed that the substances derived from hydroperoxides by oxidative stress is toxic to endothelial cells in the aortic intima and may lead to development of coronary atherosclerosis.

ROS can be formed in the heart by a variety of mechanisms, including generation during oxidative phosphorylation in the mitochondria as a byproduct of normal cellular aerobic metabolism. Oxygen is a major determinant of cardiac gene expression, and a critical participant in the formation of ROS. Increased levels of lipid peroxides in our study are an indication of increased oxidative stress. The oxidation of LDL is a free radical driven lipid peroxidation process and the aldehyde products of lipid hydroperoxide breakdown are responsible for the modification of the LDL apoprotein. Aldehyde modified Apo B protein has altered receptor affinity, causing it to be scavenged by macrophages in an uncontrolled manner with the development of foam cells and the initiation of the atherosclerotic lesion.

Levels of lipid peroxidation were found to be significantly high (P<0.001) in diabetic, smoker of group II as compared to the patients of group I. The findings suggest that diabetes and smoking are associated with increased generation of ROS, and they share the oxidative heritages. Shaikh/Suryakar

Similarly there was a significant decline in the levels of SOD, GPx, Vitamin C and TAC in group I patients as compared to controls. Further low values were found in Group II patients as compared to the patients of group I. The reduced levels of SOD in our CAD patients observed in our study could result from reduced production of SOD levels, thereby rendering an individual susceptible to oxidative damage due to non – clearance of free radicals and their propagation through chain reactions. Our findings are in consistent with Marjani et al [14] and Sabari Das et al [1] who reported increased lipid peroxidation and decreased Cu- Zn SOD activity in patients with CAD and diabetes. Glutathione peroxidase is the key antioxidant enzyme with most cells, including the endothelium. Erythrocyte GPx activities have previously been reported to be higher by Piotrawski et al [15], normal by Gromaolzinska et al [16] or lower by Rao et al [17] in the patients with myocardial infarction. The findings of our study showed a decreased activity of GPx, and in our opinion, GPx activities in our study might be decreased due to susceptibility to oxidative stress. Additional decrease in the GPx activity might be resulting from the decreased selenium levels. Low levels of ascorbic acid in CAD patients observed in the present study may be linked with the increased consumption of ascorbic acid due to increased oxidative stress, as evident from higher MDA levels. In our study TAC levels were found to be significantly (P<0.001) lower in CAD patients and these levels were associated with the severity of the disease. Fazendas et al [18] reported that TAC levels decreased in young survivors of acute MI, Yegin et al [19] also showed that there was a decrease in the activity of TAC. We have also observed our findings are in consistent with them, and a decreased TAC level might be associated with an enhanced protective mechanism to oxidative stress in CAD.

Our study showed a significant decrease in the levels of lipid peroxide with significant rise in the levels of SOD, GPx, Vitamin C and TAC in group IV patients, up to the control levels after supplementation of oral dose of A-Z antioxidant tablets (Table 1). There is an increased oxidative stress in CAD due to the excessive production of ROS, which may result in reduced total antioxidant capacity. The mechanism behind the significant reduction in TAC is due to the ROS. This results in an imbalance between antioxidant power and prooxidants, which can facilitate and augment the atherosclerotic process.

In conclusion, we suggest that supplementation of A – Z antioxidant tablets along with regular treatment may play a potential role in maintaining the balance between pro oxidant and antioxidants. Moreover, antioxidant micronutrients tend to reduce the risk and severity of atherosclerosis by inhibiting lipid peroxidation.