Parkinson’s disease (PD) is one of the major progressive neurological disorders, characterized by the loss of dopaminergic neurons in pars compacta of the substantia nigra. The causes for this is the interactions between external toxins (which arise from environmental, dietary and life style factors) and internal toxins arising from normal metabolism, genetic and epigenetic (mitochondria, membranes and proteins) components. Oxidative stress is one of the intermediary risk factors that could initiate and promote degeneration of neurons. Even though oxidative stress in brain is an important factor in the neuropathology of PD, yet the role of systemic oxidative stress is inconclusive. In the present study, we estimated the total antioxidant activity (AOA) and albumin levels in twenty PD patients who were on levodopa, and in age matched twenty-five normal con-trols. We observed a significant reduction in total antioxidant activity in PD patients with a mean value of 0.93 ± 0.17 mmol/l as compared to 1.06 ± 0.16 mmol/l in controls (P < 0.001). Albumin levels were also significantly reduced in PD patients, with a mean of 2.52 ± 0.29 g/dl as compared to 3.0 ± 0.54 g/dl in controls (P < 0.001). It could be concluded from our study that the diminution in total antioxidant activity could be due to the reduction of radical trapping capacity of naturally occurring antioxidant albumin, which in turn could be due to reduced dietary supplementation or defective absorption of amino acids. Supplemen-tation of multiple antioxidants may slow down the progression of the disease.

Oxidative stress is implicated in neuronal loss associated with neurodegeneration in Parkinson’s disease (PD). Dopaminergic nigrostrial neurons, the predominant cells lost in PD are believed to be highly prone to oxidative damage. This is due to the propensity of dopamine to autooxidize and thereby produce an elevated levels of H2O2 which reacts with transition metal iron (Fe+3) and forms the highly reactive and cytotoxic hydroxyl radicals (OH-) which are known to damage lipids, proteins and DNA [1-3]. Iron is frequently associated with neurode-gerative process [4,5]. The basal ganglia in particular, the globus pallidus and substantia nigra contain high concentration of iron which contributes to free radical produc-tion. Accumulation of iron in substantia nigra contributes to the cell death by enhancing lipid peroxidation, as judged by raised levels of both malondialdehyde and lipid hydroperoxides [6]. There are reports that antioxidant enzymes in plasma are found to be more active but to the best of our knowledge there is no conclusive evidence on the total systemic antioxidant activity in PD patients [7,8]. Hence we planned a study and correlated the systemic antioxidant activity and albumin levels in patients of PD.

Twenty PD patients who were on treatment with anti-Parkinson’s drugs (Levodopa) and twenty-five healthy age matched controls were selected in this study after tak-ing the written informed consent. The individuals in the control group were nonsmokers nonalcoholics, free from diseases. The conventional criteria for the diagnosis of Parkinson’s disease is the presence of at least one of the following cardinal features, i.e akinesia, rigidity, resting tremors [9].

The AOA was estimated by spectrophotometric method of Koracevic et al [10]. Two milliliter of blood samples were collected in EDTA bottles. Plasma was separated immediately by centrifugation and AOA is measured. This method is based on the principle that the standard-ized solution of iron EDTA complex reacts with hydrogen peroxide by a Fenton type of reaction, leading to the formation of hydroxyl radicals. This reactive oxygen spe-cies degrades benzoate, resulting in the release of TBARS. Antioxidants from the added plasma cause the suppression of production of TBARS. The reaction is measured spectrophotometrically at 532nm. The inhibit-tion of the colour developed is defined as AOA [11].

Albumin level was estimated colorimetrically [12]. The reaction between albumin and bromocresol green produces change in colour that is proportional to the albumin concentration. 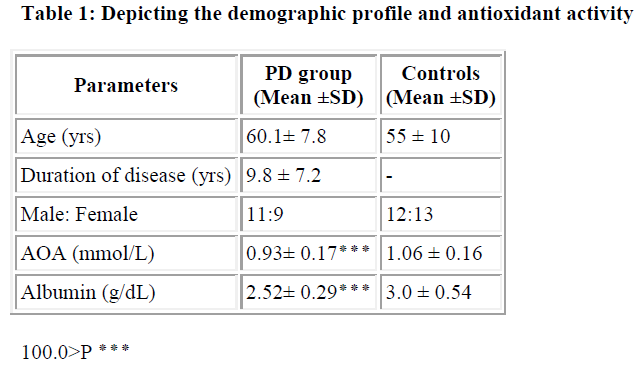 Decrease in AOA indicates disturbance in the antioxidant defence system of the body. This could be due to decrease in individual antioxidants. There are controversial reports regarding various individual antioxidants in PD. Some studies reported an increased antioxidant enzymes such as SOD, glutathione peroxidase [7,8] whereas others have showed a reduction in antioxidant enzymes viz SOD and catalase [13]. Reduced levels of antioxidants such as glu-tathione and uric acid [14], vitamin C & vitamin E [15,16] have also been reported. Several others have reported an insignificant change in erythrocyte SOD, catalase, glutathoine peroxidase and antioxidant vitamins such as vitamin C and vitamin E in parkinson’s patients [17-19]. However, no report is so far available regarding the total systemic antioxidant status in parkinson’s patients. In the present study, we have measured total antioxidant activity, a dynamic equilibrium that is influenced by the interactions between each antioxidative constistuent. The significant reduction in total antioxidant activity observed in this study could be due to greater reduction of some antioxidants which is not compensated by an increase in some other antioxidants.

Ten to fifty percent of the total radical trapping capacity of antioxidants in plasma is contributed by plasma proteins. Albumin, a major plasma protein, which contributes significantly to AOA is decreased in PD patients when compared to normal controls. Decreased albumin levels can be attributed to poor eating or difficulty in swallow-ing or difficulty in moving and getting the food or due to depression i.e. as a consequence of disease progression.

Decreased albumin levels can be due to reduced absorption and utilization of amino acids. Phenylalnine tyrosine, and tryptophan can all be blocked from absorption by levodopa, thereby becoming deficient [20-22]. This could be due to the competition for the carriers across the intes-tinal wall. There are reports that suggest a significant re-duction in plasma protein containing SH groups and albumin levels in parkinson’s patient [23,24]. The net total antioxidant activity may be more important rather than individual antioxidant activity. The reduced total antioxi-dant activity may contribute to the imbalance between prooxidants and antioxidants resulting in oxidative stress and leading to neuronal damage.

The result of the present study strongly suggests that the reduction in AOA seen in PD subjects is due to the decreased plasma albumin. It may be attributed to the inefficient absorption of amino acids. Thus it may be con-cluded that supplementation protein rich diet may in-crease albumin levels and hence increase AOA, provided given after the drug is absorbed. Supplementation of multiple antioxidants along with protein adjusted diet will maintain a balanced antioxidant status and may slow down the progression of the disease. Further studies should be conducted to observe whether AOA can be used as a marker of improvement.

The authors acknowledge Dr. I G Bhat and Dr. Shanker for their support and subjects for their cooperation.