Introduction: Beta Thalassemia (BT) disorders are characterized by a genetic abnormality in the compound of beta-globin chains, one of the most common hereditary diseases in Turkey and worldwide. Some of the characteristic orofacial complication of BT is associated with bone structure. Material and method: Thalassemic and control groups selected retrospectively from the archives of Dortcelik Pediatric Hospital, Bursa. Cephalometric measurements were used in the current study. All statistical analyses were conducted using student’s-test and Mann-Whitney U test. Results: Significant findings were shorter SNB angles, greater ANB angles, greater condylion to point A sizes, protrusive upper lips, shorter interincisal angles, greater value of wits, shorter interincisial angle, greater U1-NA, shorter anterior face height (NaMe), shorter posterior face height (SGo) are significantly in thalassemic patients (n: 26). All measurements have indicated affected orofacial structure. Conclusions: Orofacial complication due to bone structure development in thalassemic patients is pronounced. Distinct findings are treated by orthodontics. When orofacial intervention is applied, the complications were evaluated. All treatments must be controlled by a hematologist.

Beta-thalassemia major (BT) is considered one of the most prevalent genetic anomalies in the world, including in countries like Turkey [1,2]. These are a group of hereditary blood disorders characterized by abnormalities in the composition of the beta chains of hemoglobin. The total annual Beta-thalassemia incidence of symptomatic individuals is estimated at 1 in 100,000 in worldwide and 1 in 10,000 people in the European Union [3].

The deformities involve changes in the long bones of the legs and distinctive craniofacial changes (bossing of the skull, prominent malar eminence, depression of the bridge of the nose, tendency to a mongoloid slant of the eye, and hypertrophy of the maxillae, which tends to expose the upper teeth) [4-7]. The distinctive features of orofacial findings of BT are prominent cheekbones and protrusive premaxilla. Cephalometric analysis reveals dilatation of the diplopic space, subperiostal bone grows, partialy oblitered maxillary sinus. The findings are due to extra medullar erythroid hyperplasia [8-11].

According to our knowledge, scarcely any detailed studies on craniofacial measurements and deformities in thalassemic population have been published. We aimed to perform cephalometric analysis of patients with thalassemic patients consistent with the most widely-known orofacial clinical manifestations.

Records of talasemia patients and heath individuals (control group) were selected retrospectively from the archives of Dortcelik Pediatric Hospital. Selection criteria included no previous orthodontic treatment and having cephalometric films and records for talasemia, age and sex mismatch. A control group was selected from records of Class I malocclusion patients with no systemic disease who came to the dentistry clinic of Dortcelik Pediatric Hospital. 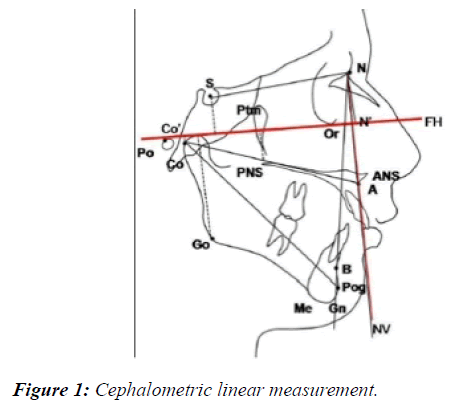 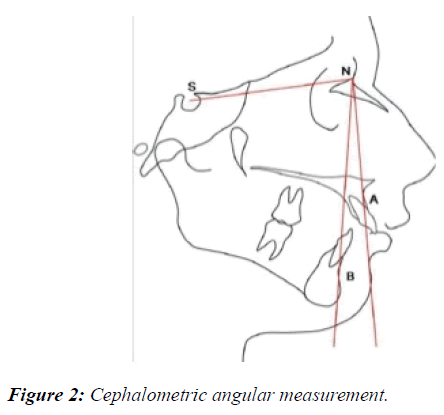 All statistical analyses were conducted using SPSS version 13.0 (Statistical Package for Social Sciences). Student’s-test and Mann-Whitney U test was used on between-group comparisons. All statistical data, p<0.05 was accepted as significant.

Table 2: Comparsion of the cephalometric variables.

Significant greater ANB angles in thalassaemia major patients attributed to a short mandible. This finding was consistent with the literature [13-15]. The SNB measurements have shown mandibular regression and increase in the thickness of the soft tissue of the chin in thalassemic kids. Short mandibles were reported in thlassemic patients some of our findings were associated with a short mandible [13-16].

Shortness of SGo and P-A face height was founded. These findings were similar to literature [13,15].

Orofacial abnormalities in these patients are important in three aspects. Firstly, hemoglobin values of these patients need to be kept at an optimal level (base line of hemoglobin level between 9 and 10 gr/dL). This application will reduce the occurrence orofacial complications [13,18,19]. Secondly, orofacial complications should be treated by an orthodontist. Cephalometric evaluation must be done during orthodontic treatment. Characteristic complications of thalassemic patients are well known. This knowledge is necessary for any orofacial intervention. And finally, all treatment plans should be consulted to a hematologist.