Materials and Methods: The corn gluten meal used in this study was a gift from the Xiwang group in China. Zein was dis-colored from corn gluten meal by alcohol (1:6) under ultrasound (Elmasonic S50R, German) twice for 15 min each time. Zein was extracted through preliminary optimized conditions of 55% ethanol at 38°C for 15 min. The extracted zein was placed in a beaker before use.

Results: The optimum conditions to obtain a high DPPH radical scavenging rate was close to the predicted value (7.523%, 0.0416 mg/mL ascorbate equiv), and they were as follows: an enzyme to substrate level of 1% (w/w), temperature of 40°C, time of one hour, and pH of 8. HPLC detected more than 26 constituents in the zein hydrolysate, and the content of glutamic acid rose at a relatively high degree from 16.8 to 19.1.

Conclusion: The best recycling method for colourless zein with high antioxidant activity was dilutionfreeze- drying. The zein including hydrolysate has potential for applications in functional foods, which would significantly improve the added value.

The film-forming properties of zein, the principal protein of corn named by John Gorham in 1821, make it popular for coating preservation or sub-micron structured encapsulation [1,2]. At present, the main method of preparing zein is aqueous alcohol extraction from discolored corn gluten meal (CGM). The production of zein has been well-researched; however, the current prohibitive costs of bleaching and extraction have limited its application. Recent studies have also reported antioxidant activity as a result of the hydrolysis of zein. Through a powder model system of docosahexaenoic acid ethyl ester (DHE), Matsumura et al. found that zein rich in β and γ-type subunits had higher antioxidant activities [3]. Both glutamine mild deamidation and glutamic acid/glutamate residual formations may cause zein to have radical scavenging activity. Concurrently, reports have confirmed that the acid or alkali treatment of the conversion of glutamine and asparagine amino acids to their acidic or salt forms could enhance antioxidant activity [4]. Zhang et al. researched the antioxidant properties of zein at different pH levels, reporting that the radical scavenging rate at pH 2.7 and 12.5 was higher than that at pH 3.3, 6.5 and 10.5 [5]. Although zein had antioxidant activity in aqueous alcohol, the high content of non-polar amino acids, such as alanine, proline, and leucine, made it difficult to dissolve zein in water. However, enzymatic hydrolysis could increase the solubility of zein in both aqueous alcohol and water. Enzyme treatment may enhance the functional properties, such as solubility, foaming, and moisture absorption, of zein in general [4].

The corn gluten meal used in this study was a gift from the Xiwang group in China. DPPH was purchased from Sigma. Alcalase (endoproteinase from Bacillus licheniformis, 2.4 AU/g) was bought from Novozymes. Unless mentioned otherwise, the chemicals and reagents used in this experiment were analytical grade.

Zein was discolored from CGM by alcohol (1:6) under ultrasound (Elmasonic S50R, German) twice for 15 min each time. Zein was extracted through preliminary optimized conditions of 55% ethanol at 38°C for 15 min. The extracted zein was placed in a beaker before use.

Dilution-freeze-drying (DFD): Cold water (0-4°C) was added to the zein extract to dilute the alcohol concentration to 20-40%. At this concentration, the zein extract was in a state between coacervation and precipitation [8]. After removing the residual pigment, cold water was added to produce precipitate. The following treatments were the same as FD.

Refrigeration-vacuum-drying (RVD): The zein extract was flocculated at -18°C. After removing supernatant, the following treatments were the same as VD.

The yield and the purity of the zein were measured, based on previous studies, with a Kjeldahl auto analyzer (Hanon K9860, American) [9,10]. A calculation of the percentage of extracted zein weight from the total CGM weight (db) was used to determine the yield rate of recycled zein. The protein purity was calculated as the amount of protein content in the extracted zein.

The Lovibond Tintometer, a color comparison instrument (WSL-2, Shanghai precision scientific instrument Co., Ltd.), was used to determine the color of the zein. The versatile and visual colorimeter measures the color of liquids, solids, powders and pastes with Lovibond red, yellow, blue and neutral units [11].

The DPPH assay was created based on the literature from previous research [12], but with some modifications. 0.1 mL of zein solution (1 mg/mL) and 3.9 mL of DPPH (1 mM) in a 55% ethanol solution were mixed and then placed in the dark for 30 min at room temperature. The absorbance was examined with a spectrophotometer (UV-1750, SHIMADZU) set at 517 nm. A standard curve (linear) was generated for comparison by reacting 0.1 mL of a concentration made of different ascorbates (0-0.2 mg/mL) with 3.9 mL of DPPH solution.

The preparation of zein hydrolysate

The zein hydrolysate was prepared by using a vortex mixer (lab dancer, Germany IKA) to throughly blend the alcalase and then reacting the solution in a water bath. After hydrolysis, the solution was heated at 95°C for 4 min to inactivate the enzyme. The zein hydolysate solution was centrifuged (CR22GIII High- Speed Refrigerated Centrifuge, Hitachi Koki Co., Ltd) at 4000 r/min for 4 min and after, the supernatant was freeze-dried and stored at 0-4°C before use.

Table 1a. Factors and levels of response surface design.

Table 1b. Design and results of response surface experiments.

The purification, HPLC, and amino acid analysis of zein hydrolysate

The zein hydrolysate was purified by column chromatography at a flow rate of 1 mL/min with a Sephadex G-25 (GE healthcare bio-sciences AB, Sweden). The mobile phase consisted of ultrapure water, which was collected every 10 min in a small tube. Next, the antioxidant activity of the sample in each tube was tested by DPPH assay. Afterward, the collected sample with highest antioxidant activity was analyzed by high performance liquid chromatography (Aglient 1200 serious, USA) with a 300 SB C18 column (4.6 × 150 mm i.d., 5 μm). The mobile phase during the elution consisted of water containing 0.1% trifluoroacetic acid (Eluent A) and of acetonitrile containing 0.1% trifluoroacetic acid (Eluent B). The optimized conditions with this column were as follows: flow rate of 0.5 mL/min, 5-40% B for 35 min, injected volume of 5 μL, λ=280 nm, and temperature of 30°C. Amino acid analysis was completed according to the Chinese National Standard GB/T 5009.124-2003.

The Least Significant Difference (LSD) method was used to make multiple comparisons between the data results, with α=0.01 performed in 3 independent replications. The results of the response surface method were analyzed with SAS 9.2.

Table 2 shows that the purity level, treated as the total protein in the extracted zein, varied in different recycling processes. The purity level was lowest from the vacuum drying process, and was at its highest level from the blast-drying and dilution-freeze-drying processes. These results occurred because some of the non-zein matter decomposed in high temperature or washed away by water. The yield rate of recovered zein was highest from the blast drying process, but the standard deviation reached 3.41%, primarily as a result of the temperature. High temperature had a negative effect on the zein, and increased the margin of error for the yield rate. Certain conditions, caused by differences in solvents and materials, caused the yield rate to be higher than the yield in experiments done by Wu et al. [9,10]. DPPH radical scavenging activity was highest under the condition of vacuum drying. The other recycling methods, with the exception of freeze-drying, had no significant impact on DPPH radical scavenging activity. The color of the zein in the fourth recycling method was obviously lighter than the zein produced from the other recycling methods. Instead of directly freezedrying, adding cold water to the extraction in the dilutionfreeze- drying method could cause the zein to coacervate and precipitate, leading to the easy removal of the residual pigment. This method using precipitate would conserve more energy than directly freeze-drying. The fourth method had the light color, and also guaranteed the yield, purity and antioxidant.

Table 2. The characteristics of zein as a result of different recycling methods.

As Table 1c shows only pH level was extremely significant (p<0.01) among these independent variables. The interactions between the different factors did not have a significant influence (p>0.05) on any of the response variables except for the interaction between the enzyme level and the pH level (p<0.05). The model was logical, because the model was significant (p<0.05) while the lack of fit was not significant (p>0.05). The order of relevance of primary factors is pH>enzyme level>temperature>time. The model equation used for calculating the radical scavenging rate was as follows:

According to Ridge Analysis, the Eigen values were namely 0.938, 0.610, 0.235 and -0.268, so the stationary point was a saddle point. Optimizing the hydrolysis condition according to Tang et al. did not result in a maximum value [12,13]. Nevertheless, the hydrolysis condition could still be optimized through the use of the master model (p<0.05). The yield of zein hydrolysate was 10 to 20%, but the DPPH radical scavenging rate of the zein hydrolysate was obviously higher than that of the zein. Table 1b shows that the 21st experiment had the highest radical scavenging rate of 6.935%, which was equal to 0.0383 mg/mL of ascorbate. Maintaining the pH at 8 optimized the radical scavenging rate, and for the most optimal results, the conditions were as follows: enzyme to substrate level 1% (w/w), temperature at 40°C, time at one hour, and a pH of 8. Under these conditions, the DPPH radical scavenging rate was 7.523% (0.0416 mg/mL ascorbate equiv.), which was close to the predicted value.

The zein hydrolysate was purified by column chromatography through the use of a Sephadex G-25. As Figure 1 demonstrates, the fraction was typically washed out in 30 to 90 min (Table 3); the fraction that absorbed the most in 65-75 min possessed a higher DPPH radical scavenging rate than the other fractions. Special amino acids (e.g. tryptophan, tyrosine and phenylalanine) are necessary for a high absorbancy rate at 280 nm, so the highest antioxidant fractions contained at least one of these amino acids with the benzene ring structure. As a result, this fraction was analyzed by HPLC. 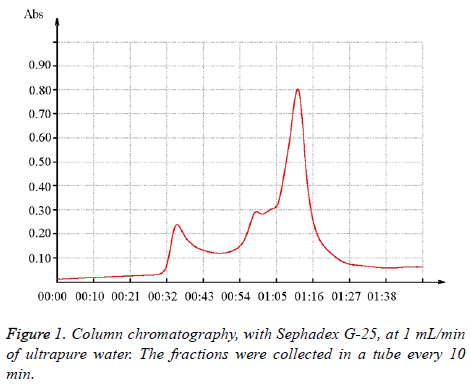 Figure 1: Column chromatography, with Sephadex G-25, at 1 mL/min of ultrapure water. The fractions were collected in a tube every 10 min.

Note: At the beginning, it was mobile phase washed out from the column. The fractions were collected from the 5th min.

Figure 2 shows that there were more than 26 constituents present in the hydrolysate. The antioxidant activity of the zein hydrolysate was higher than that of the zein itself because the zein was hydrolyszed into groups of small fragments, some of which were exposed to the system. The constituents differed from Ma et al. in both types and content [14]. The next step was to completely separate all the constituents and then to collect each constituent according to varying polar coordinates. More details about each component still needed to be studied by other methods, such as quadrupole time of flight mass spectrometry or nuclear magnetic resonance. 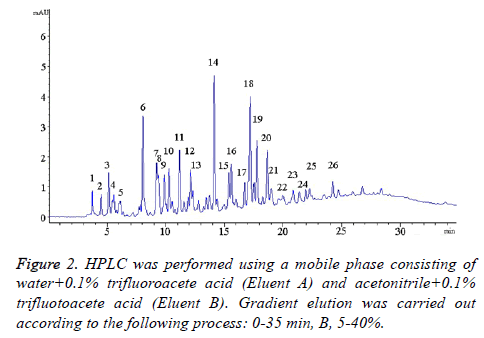 As shown in Table 4, the content of total amino acids rose from 77.9 to 86.7 after hydrolysis, but the contents of the individual amino acids rose at varying degrees. Most significantly, glutamic rose the highest degree from 16.8 to 19.1. This result was consistent with the conclusions on the antioxidant activity of zein hydrolasate from previous studies, which proposed that the increased radical scavenging rate may be attributed to the mild deamidation of glutamine and to the formation of residual glutamic acid/glutamatere in zein [5].

Table 4. Amino acid composition of zein and its hydrolysate.

The best recycling method for colorless zein with high antioxidant activity was dilution-freeze-drying. The optimal hydrolysis conditions to obtain increased antioxidant activity were: enzyme to substrate level 1% (w/w), temperature of 40°C, time of 1 h, and a pH of 8. Through HPLC analysis, more than 26 types of zein hydrolysate constituents were detected. After hydrolasate, total amino acids increased from 77.9 to 86.7 and, with the exception of glycine, proline and lysine, most amino acids increased. The zein including hydrolysate has potential for applications in functional foods, which would significantly improve the added value.

The authors gratefully acknowledge the grant from the National High Technology Research and Development Program of China (863 Program, No. 2013AA102206).