The spiny lobsters such as Panulirus homarus, P. ornatus, P. versicolor, P. penicillatus, Panulirus longipes and P. polyphagus have been reported Southeast-coast and west coast of India. All the species have been identified based upon the external features and color markings. There are currently recognized six families, 55 genera and 248 species (with four sub-species) of living marine lobsters [1]. The six families of extant lobsters are Enoplometopidae, Nephropidae, Glypheidae, Palinuridae, Scyllaridae and Polychelidae. The spiny lobster family Palinuridae contain eleven genera. They are Jasus, Justitia, Linuparus, Nupalirus, Palibythus, Palinurellus, Palinurus, Palinustus, Panulirus, Projasus, Puerulus and Sagmariasus. The annual lobster landing in India, the peak landing was 1985/4075t, the present annual average of 1,546t. An average, the fishery was contributed by Gujarat (43.7%), Maharashtra (25.4%), Tamil Nadu (14.6%) and Kerala (13%) [2,3]. Costliest seafood in spiny lobsters in India, the live spiny lobster has been export along with crabs and reef fishes. Revenue of Indian fisheries market to export of spiny lobsters the sum of amount Rs.74 crores. The price of live lobster in domestic market ranged from a minimum of Rs. 500-2,800/kg. P. penicillatus¸ the rare occurrence of specimen have been recorded off Tuticorin coast, Gulf of Mannar, the few information has been available on the reproductive biology of the species, only occasional capture fisheries from Tuticorin coast. Ministry of Commerce and Industry, Government of India were implemented minimum legal size for export of lobsters during 2003, still juveniles are caught and exported illegally which fetch very low price. This study has been reported earlier from southeast and west coast of India [4-8]. The present record of this specimen, off Tuticorin coast, extending its distribution to the Southeast coast of India.

Body greenish, ranging from yellowish-green through browngreen to blue-black. Antennular plate with 4 strong spines which are fused at the base forming a single bunch of 4 diverging points, the anterior pir shorter than the posterior. Transverse grooves over the abdomen uninterrupted.

This species has the widest distribution of any of the spiny lobsters. It occurs in the Indo-west Pacific and East Pacific regions, South Red sea to South and East Africa; Madagascar and surrounding islands, through the Indian Ocean and South China sea to Japan, the Philippines, Indonesia, Hawaii, northern and eastern Australia, Islands of north west coast of US and Mexico. Along the Indian coast, it has been rare occurrence off Tuticorin coast, only occasional capture of the species from south-east-coast and south west coast, Lakshadweep and A & N Islands. 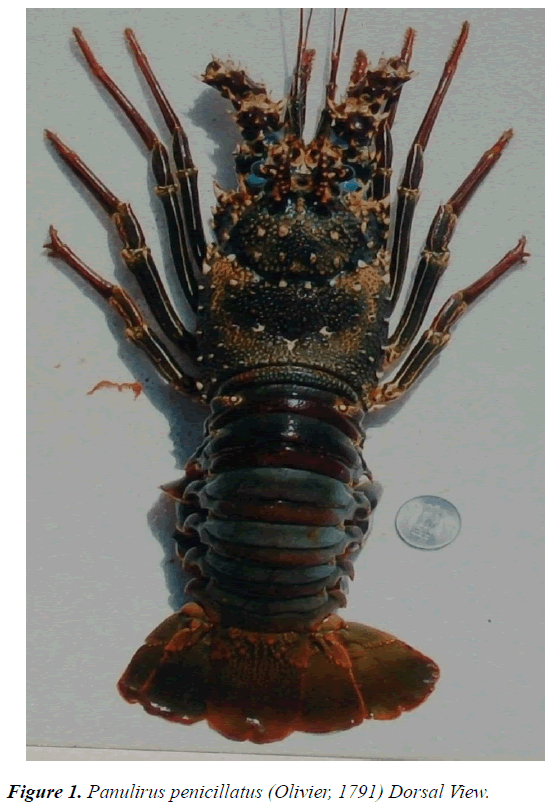