Neuroendocrine cells are located throughout the gastrointestinal mucosa and play different roles according to the molecules they produce. In the colon, these cells are called enterochromaffin cells and are capable of releasing serotonin. Serotonin exerts a wide range of effects in the gut, largely due to the presence of multiple receptor subtypes that are present on smooth muscle, enteric neurons, enterocytes and immune cells [1].

There is general agreement that serotonin release could stimulate motility and secretion. An increase of serotonin could lead to increased motility and secretion, and therefore diarrhea and abdominal pain. Many authors have studied the presence of these cells in patients with diarrhea. For example, Kim et al. showed an increase of serotonin and PYY containing neuroendocrine cells in a small group of patients with post infectious irritable bowel syndrome compared to controls [2]. We previously studied the presence of enterochromaffin cells in irritable bowel syndrome, but we could not find significant differences compared to controls. It should be noted that our study was limited by the use of histochemical (silver stain) in the study of enterochromaffin cells instead of immunohistochemistry markers [3].

Neuroendocrine cells and Serotonin release seems to be closely related to inflammation. It has been demonstrated that colitis induction in mice can cause enterochromaffin cells hyperplasia [4].

The etiology and pathophysiology of microscopic colitis is not well understood but is likely to be multifactorial, involving mucosal immune responses to luminal factors in a genetically predisposed individual [5].

In lymphocytic colitis, El Salhy et al. have reported neuroendocrine cell hyperplasia. The authors propose that this could explain, at least partially the chronic diarrhea in these patients [6]. Ulcerative colitis, in turn, is a chronic, relapsing inflammatory disease of the colon, characterized endoscopically by diffuse continuous involvement of the mucosa and histologically by crypt distortion and basal lymphoplasmocytosis In ulcerative colitis, some authors have also found an increase in enterochromaffin cells [7], which could be related to a later development of neuroendocrine neoplasia.

The aim of this study was to evaluate the presence of neuroendocrine cells in 3 types of colitis: ulcerative colitis and lymphocytic colitis and collagenous colitis.

The study included 10 cases of Lymphocytic colitis, 10 cases of collagenous colitis and 10 cases of ulcerative colitis. Histological slides were reviewed by 3 different pathologists. All selected cases fulfilled diagnostic histologic criteria. 10 Controls were selected among patients with minimal inflammation, which did not fulfilled criteria for specific colitis.

The following diagnostic criteria were defined:

Colonic mucosa with crypt distortion and basal lymphoplasmocytosis [8]. Immunohistochemistry was performed to identify neuroendocrine cells through a marker chromogranin A (CgA). The avidin-biotin complex / immunoperoxidase method was used. The primary antibody used was a polyclonal rabbit for chromogranin A (Dako).

Count of neuroendocrine cells was obtained from the average of the number of positive chromogranin A cell in 3 high power fields (40x) with higher density of these cells. The analysis of the data was done using the student T test for comparison of means. We used the epi info cdc software for our analysis, we considered a p value of less than 0.05 as significant.

We included 10 patients of lymphocytic colitis, 10 with collagenous colitis, 10 with ulcerative colitis and controls. All patients fulfilled the diagnosis criteria required for pathological diagnosis. Chromogranin-A imunohistochemistry show positivity for neuroendocrine cells in control and patients, with differences in cell density. Figure 1, displays differences in the density of neuroendocrine cells in control, lymphocytic colitis and ulcerative colitis. 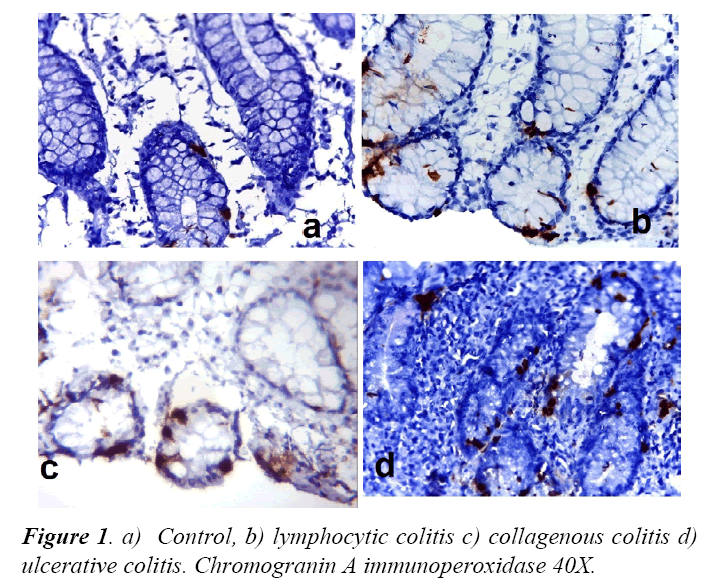 There was statistically significant difference in the count of neuroendocrine cells, in both lymphocytic colitis and ulcerative colitis with respect to controls. Table 1 shows cell count and the differences found.

*with respect to controls.

Our results show an increase of neuroendocrine cells (hyperplasia) in lymphocytic colitis and ulcerative colitis, similar to what has been reported by other authors.

Some authors believe carcinoid tumors and neuroendocrine neoplasias other than carcinoids may also be associated with ulcerative colitis, suggesting that long-standing inflammation is directly responsible for the development of these kind of neoplasiaS [9].

Association between inflammation and neuroendocrine cells has been studied in the colon. Experimentally it has been demonstrated that neuroendocrine hyperplasia could be caused in trinitrobenzene sulfonic acid -induced colitis mice [11]. Other experimental studies have shown that neuroendocrine cell hyperplasia could be related to Il13 release. Using the nematode Trichuris muris model of colitis in Il 13 deficient mice, Manocha et al. demostrated that enterocromaffin cells count were lower in Trichuris muris–infected IL-13 deficient mice compared with the wild-type mice [12].

On the other hand, some studies have shown that serotonin may contribute to the initiation of intestinal inflammation. Experimental data suggest that colitis induced in tryptophan hydroxylase1-deficient mice, which have significantly reduced amounts of serotonin in the gut, is less severe compared to wildtype mice [13].

Further studies have demostrated that Serotonin increases the in vitro phagocytic activity of macrophages in a dose-dependent manner [14].

We could observe neuroendocrine cell hyperplasia in lymphocytic colitis and ulcerative colitis compared with controls. These findings highlight the close relationship between enterochromaffin cells and inflammation, and supports the idea of the existence of a neuroendocrine-immuno axis in gastrointestinal pathology. More data are required to provide better insight on this relationship.