In this work, we propose to apply TRIZ approach towards use of magnetotactic bacteria for the extraction of the magnetosems naturally produced by these bacteria. More specifically, we suggest to apply the 2nd principle of TRIZ (BioTRIZ) to the specific case of Magnetotactic bacteria: we are theorizing that it could be possible to nurture these bacteria with certain amounts of iron-containing nutrients to come up with magnetosomes of varying, desirable nano sizes. Then the bacteria can be killed and the biologically- formed nano-magnets produced by them can be “taken out”. These nano-size magnets can then be used in various applications, perhaps nanogenerators or the like nano-devices. The idea expressed here has the following novelties: 1. Application of (Bio) TRIZ principles to bio-nanotechnology. 2. Introduction of the new concept of “Nano-bio-mining” where living micro-organisms may be programmed to manufacture Nano-size metallic compounds that, then, can be removed and applied in various applications.

In modern times, at least since 1950’s, research has been taken as a systematic approach that can be defined in terms of few principles. These days, problem-solving and invention cannot be done by weird-looking scientists who are often being stereotyped. Rather, invention has its own tool box and algorithm.

A very powerful tool of invention is TRIZ. TRIZ is the abbreviation of the Russian term “теория решения изобретательских задач” that can be translated as "The theory of inventive problem solving" [1-10]. TRIZ has very interesting features among which are its 40 principles. The main features of TRIZ and how they are applicable have been addressed in the work by Levbare et al. [9]. Based on their work, we can summarize these features in Figure 1. 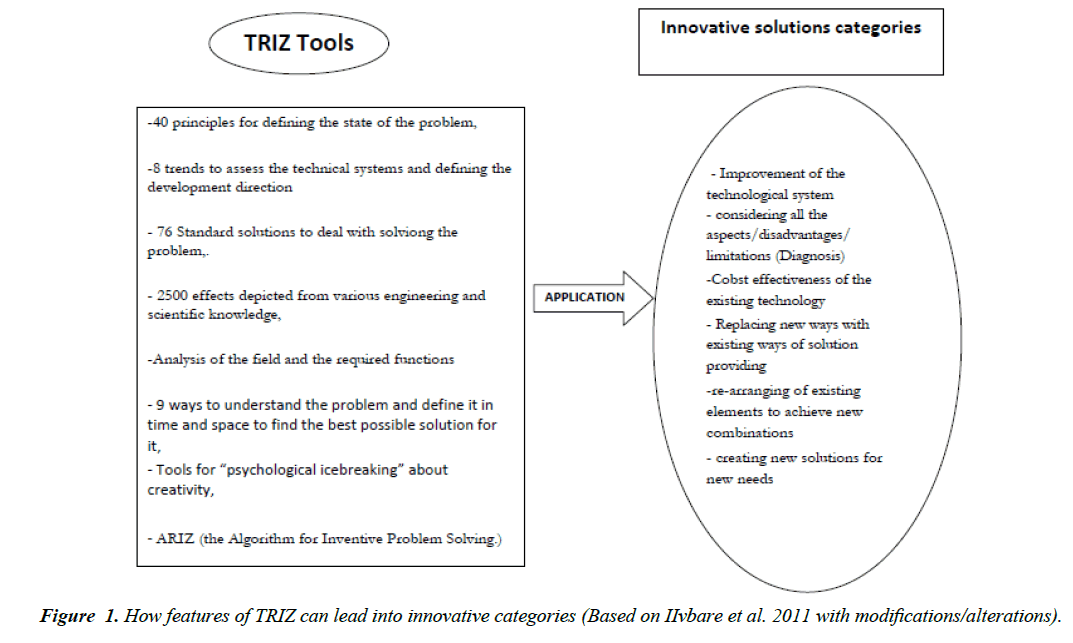 Figure 1: How features of TRIZ can lead into innovative categories (Based on IIvbare et al. 2011 with modifications/alterations).

Among various types of micro-organisms that can be found in nature, there is a class of bacteria that can be collectively referred to as “magneto tactic bacteria” or –equivalentlymagnetic bacteria. These bacteria are termed magnetic because if their ability to form nano size magnets within their “body” [11]. The average size of each of these nano size magnets (called a magnetosome) is about 50 nm [6]. Magnetic bacteria were discovered in mid 1970s and they can either be aerobic or anaerobic [4]. These bacteria may also be handy in taking out metals and – potentially- acting as “soil refiners” for the contaminated soils [10]. As magnetic bacteria is capable of accumulating huge amounts of iron [6]. It has been theorized they may be an instrumental factor in inducing corrosion [8,12]. According to Hughes [6] while up to 80% of magnetosome consists of magnetite (Fe3O4), it can highly be possible that other minerals of iron –for example iron sulphides-may also exist in some magnetic bacteria. Figure 2 shows the possible mechanism by which Fe3O4 can be formed within magnetosomes:

It follows then that magnetotactic bacteria are capable of being envisaged as tiny natural manufacturing plants in which provided that their required dosage of iron is supplied, nano size magnets (magnetosomes) can be expected to form. This is a very important aspect of our proposal in two respects:

1. It is the magnetosmes that will be the focus of the second TRIZ principle in our theory.

2. It is these magnetosomes-in the form of nano magnets - that will be the primary “products”: of employing magnetic bacteria.

Nano-magnets have various fields of application [13,14] for example in Medicine [5] or even in data storage [7]. Therefore, nano-magnets are, as time goes by will become, important in not only multilateral services they can provide us with but also downsizing the device’s sizes as well as being in accordance with TRIZ 6th Principle (Universality) and 28th Principle (Mechanics Substitution) .” (http://www.1000advices.com)

1. Like all other field of science and technology, biotechnology and specially nano-biotechnology have a great potential for applying TRIZ principles as an algorithm for inventions.

2. In this work, we have suggested that the second principle of TRIZ (the principle of “taking out”) can be applied to biological systems. The example here was magnetotactic bacteria.

3. Magnetotactic bacteria form nano-size magnets (iron oxide) - that are called magnetosome - which they naturally produce by taking in iron.

4. It was suggested that naturally occurring magnetosomes can be grown inside the bacteria and-possibly with controlling parameters such as iron uptake- different sizes of these magnets can be produced within bacteria. Then these magnets can be “taken out” and be used in applications such as, but not limited to, nano-magnets.

5. Potentially, this proposal can also include formation of other nano-size “minerals” such as iron oxide.

6. We call the whole process of growing such minerals inside the bacteria and then extraction of them as “Nanobio- mining” as the size of the mineral is in the range of nano particles, the source in which the mineral is formed in biological, that is the bacteria, and the operation of extracting and taking out these minerals resembles mining in the sense that metals are extracted and taken out of their ores.

The idea expressed here has the following novelties:

2. Introduction of the new concept of “nano-bio-mining” where living micro-organisms may be programmed to manufacture Nano-size metallic compounds that, then, can be removed and applied in various applications.