Background: Musculoskeletal Disorders (MSDs) are significant workplace problems affecting dental professionals. This disease is on the rise among dental workers. Despite improvements in knowledge and ergonomic strategies in dental workplace, many dentists still don’t believe that their work environments affect their physical health. Moreover, many dentists don’t follow ergonomic guidelines in their practices.

Aim: To assess the prevalence and the relationships between demographic variables and some dental practices with musculoskeletal disorders among Lebanese dentists.

Materials and methods: Self-administrated questionnaires were answered by a sample of 218 dentists. I collected information about demographic variables such as gender, age, and years of experience, practices, and specialization. I also collected information about other variables such as: location of pain in different parts of the body. The recorded data was analysed with SPSS 20. P-value <0.05 was considered to be statistically significant.

Results: 92.7% of the participants suffered from musculoskeletal disorders; out of which 40% had at least one MSD symptom over the past twelve months. Most common areas affected by MSD in order of magnitude were low back pain (61.8%), neck pain (51.5%), shoulders pain (39.5%), fingers pain (14.1%), wrists pain (11.8%), and elbows pain (8.6%). Pain differences were statistically significant among specialists. Back pain was the highest among paediatric dentists. Neck pain was the highest among endodontic dentists. While shoulders pain was the highest among dental surgeons. Neck pain was related to the working hours per day. Pain location was statistically significant between genders. In particular, females suffered more than males especially at the neck and the wrist levels. Permanent pain by location is inversely proportional to physical activity.

Dentists are often exposed to a variety of occupational hazards that include but are not limited to chemical, biological, legal, as well as ergonomic hazards. These hazards can lead to diseases, disorders, and stresses [1]. In United Kingdom, a study had shown that the most frequent causes of premature retirement among dentists were: Musculoskeletal disorders 29.5%, cardiovascular diseases 21.1%, and neurotic symptoms 16.5% [2]. Musculoskeletal disorders and stress related illnesses were the two most important factors that influenced premature retirement [2].

Literature reviews across the world confirm that there is a high prevalence of Musculoskeletal Disorders (MSDs) among dentists [3-5]. The estimation is that 63-93% of dentists experienced musculoskeletal disorders worldwide [5]. World Health Organization (WHO) and United Nations [3] recognized that MSDs are the causes of long-term pains and disabilities that affect hundreds of millions of people [6]. World Health Organization defines an MSD as “A disorder of the muscles, tendons, peripheral nerves or vascular system not directly resulting from an acute or instantaneous event (e.g., slips or falls)” [7].

Problems causing MSDs symptoms are numerous. Risk factors are habits, genetic predisposition, physical conditioning, and age [1,6,8]. Dentists spend their workdays in static and awkward positions with repetitive movements, frequent vibrations affecting their hands and wrists, and suboptimal lightings [1-6]. They perform precise procedures in a small workspace: “The Patient Mouth”. Common postures of dentists are static these static postures require contractions of muscles to hold the body motionless while resisting gravity [9-10]. The awkward positions are due to improper seating, improper patient positioning, poor technics, and poorly designed equipment. Repetitive motions are extremely prevalent in clinical practices that involve performing scaling, root planning, and polishing [9]. Excessive Force is also prevalent in dentistry while extracting teeth. Grasping small instruments for prolonged periods requires a much greater force application than a power grip (object in the palm of the hand) [3].

However, there is reason to believe that MSD represent a significant barrier for the dental profession. A systemic review of high prevalence of MSDs in the dental profession identified a clear trend towards increasing awareness about MSDs in developed countries when compared to less developed countries [3,4,11]. What about Lebanon? In light of the above, the aim of this study is to assess the prevalence of MSDs among Lebanese’s dentists.

• Working technics: posture (standing or sitting or alternate between standing and sitting), duration of work (working hours per day, working day per week), and vision (if direct or indirect vision).

• Pain location over the twelve past months: neck, shoulder, lower back, fingers, wrists, and elbows.

• Frequency of pain (rare, permanent, occasional, or none).

• Physical or none physical activity.

More than 300 questionnaires were hand-distributed to the participants during the day. The approached dentists were given a choice to fill either an English or French survey. Moreover, the dentists were asked to return it after answering individually in order to avoid collective answers and peer influence. The questionnaires were anonymous to maintain confidentiality.

Demographic characteristics of the study sample

The sample included 218 dentists of which 67.4% are males and 32.6% are females. The mean age of the participants was 43. General dentists accounted to 67% of the studied subjects, and the remaining were specialists: Paediatric dentistry, oral surgeon, endodontic, periodontologist, and orthodontic. The average duration of practice was 18.6 years. Most of the practitioners were working 7 h per day and 5 days per week. 64% of dentists were working in the sitting position, and 52% of the dentists were using both direct and indirect vision (Table 1).

Table 1: Distribution of dentists by demographic characteristics in relation to the prevalence of MSD. 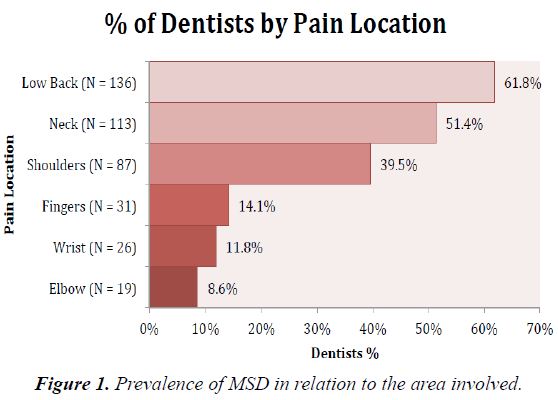 Figure 1. Prevalence of MSD in relation to the area involved.

Pain was statistically significant by specialty. Back pain was the highest among paediatric dentists (67%) and general dentists (66%), and the lowest for oral surgeons (47%) (Figure 2). 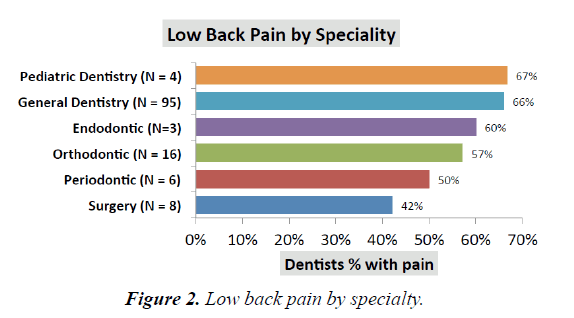 Figure 2. Low back pain by specialty.

Area wise predilection of MSD in relation to specialty of the dental practitioners.

MSD in the low back area was the highest among paediatric dentists and general dentists, and the lowest among oral surgeons.

Neck pain was the highest among endodontic dentists (60%) and the lowest among paediatric dentists (33%) (Figure 3). 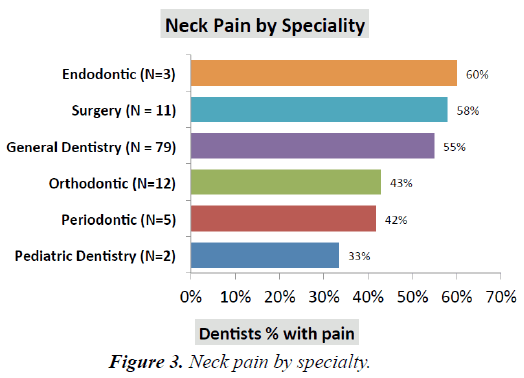 MSD in the neck area was the highest among endodontics and surgeons, and the lowest among paediatric dentists. 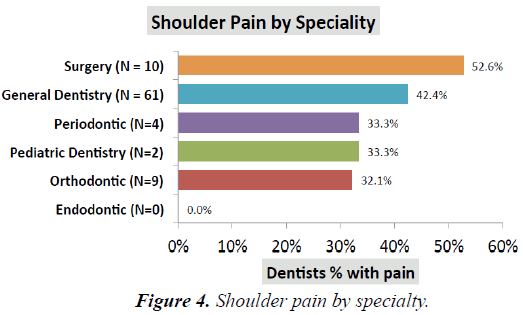 MSD in the shoulder area was the highest among surgeons, and they’re no pain among endodontics.

The comparison between male and female showed that females had more pain in almost anatomical areas (neck, shoulders, elbows, wrists and fingers). Differences in the neck pain and wrists pain were statistically significant at level 0.05.

Working hours per day seems to have relation with neck pain. 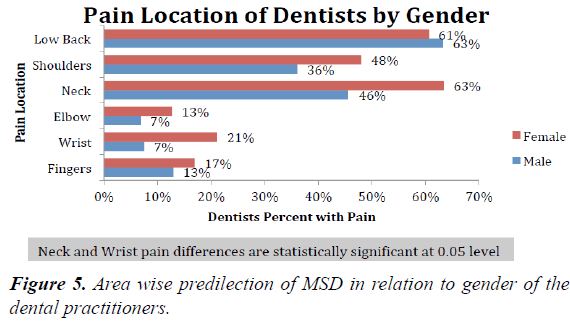 Figure 5. Area wise predilection of MSD in relation to gender of the dental practitioners.

It seemed that the most physical activity practiced by Lebanese dentist was walking 50.9% (Figure 6). 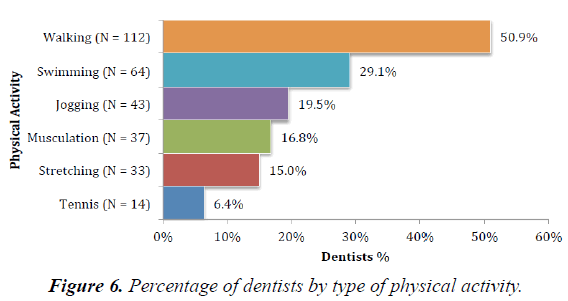 Figure 6. Percentage of dentists by type of physical activity.

The relationship between pain and physical activity was inversely proportional. The frequency of pain decreased with physical activities. In particular, pain became rare instead of permanent (Figure 7). 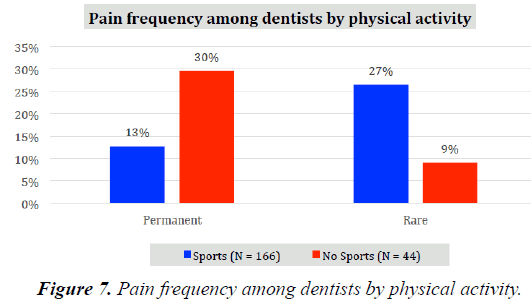 There are no relationships between MSDs symptoms and neither age, nor years of practice.

The importance of maintaining healthy life is irrefutable. As the prevalence of MSD across the world is high [12,13], dentists need to understand the factors that contribute to this disease so they can make better choices regarding ergonomic equipment’s, physical exercises, and healthy lifestyle. The comparison between the two latest studies conducted in Lebanon in 2001 and 2013 shows that the number of dentists suffering from MSDs is increasing. In fact, 66% of Lebanese dentists suffered from MSDs in 2001 [14], whereas 92.7% of Lebanese dentists suffered from MSDs in 2013. While only 7.3% of Lebanese dentists hadn’t complained from MSDs, 40% of Lebanese dentists had at least one MSD symptom over the twelve past months, and 60% of Lebanese dentists suffered from pain in more than one side. These results suggest that dentists’ awareness in preventing and managing work-related musculoskeletal problems in their practice is sufficient. The increasing prevalence of MSDs between 2001 and 2013 is probably due to: 1: The frequency and duration of awkward body positioning, 2: Movements made by dentists in their daily work, and 3: The lack of recovery time and physical activity. In fact, taking breaks between cases are extremely recommended [15]. Moreover, using micro pauses and stretching during dental procedure are very efficient [4,16,17]. Many studies pointed out to the efficacy of these preventive remedies. In particular, stretching increases the blood flow to muscle, the production of joint synovial fluid, the nutrient supply to vertebral disks, and reduces formation of trigger points [18]. The results of both surveys in Lebanon confirm that MSDs symptoms are decreasing with physical activity (P=0.07), and with frequency and period of breaks during the work day (P=0.05) [14].

There are many studies concerning MSD among dentists. A targeted look at the upper and lower body, neck, shoulders, and wrists are common in all studies. These studies have shown a high prevalence in musculoskeletal disorders. Studies in Lebanon as well in New Zealand and in Saudi Arabia [19] have shown that most common areas affected by MSD in order of magnitude were Low back pain, followed by neck pain, followed by shoulders pain.

Based on the final results, low back pain was the highest for paediatric dentists and general dentists, and the lowest for dental surgeons. It seems that paediatrics dentists in Lebanon are bending or twisting their upper bodies to reach the small working spaces (mouths of the young patients). During bending and twisting motions of the spine, the pressure on the lumbar discs is increased by 200%. This can cause compression on a spinal nerve (Fish, 1987). Repeated twisting in one direction may result in muscle imbalances leading to low back pain [20].

Neck pain prevalence was: 51.4% in Lebanon, Queensland Australia (57%) [22,23], in Dutch (51%) [24], Iran (47%) [20], Saudi Arabia (39.3%) [19] and New Zealand (57%) [18]. Similar to my results, in China daily working hours were significantly associated with the presence of neck pain [4]. Based on the final results, neck pain was the highest for endodontic dentists and oral surgeons, and the lowest for paediatrics dentists. Endodontic as well as surgeon spend their workday in awkward head positions to perform precise procedures. Besides, they have a high level of stress while performing treatments, which increases the potential risk of injuries. Use of loupes or surgical telescope is very helpful while doing endodontic treatments. In particular, dentists could maintain their bodies so the body could be maintained in a neutral working posture. Head over the shoulder, head and back are aligned [4,25].

Shoulders pain in this study was 39.5%, it was the highest among surgeons, approximately similar results are found in USA [3]. In New Zealand, the prevalence of shoulders pain was 52% [18]. It seems that dentists in China have complained more from shoulders pain 83.3% than in others part of the body [26]. While extracting a tooth, surgeons raise the upper arms. This causes a significant impairment in blood circulation within the shoulders and neck regions.

Gender pain differences were found also in Lithuania, New Zealand, India [3] and Saudi Arabia [19]. Females had more pain than males. In my study, neck and wrist pains were statistically significant. In Saudi Arabia, shoulder’s pain was double for the females [19].

As a result, dentists should manage their health by adopting ergonomic guidelines in their work places. They should attempt to use a wide range of positions around the patients heads, often referred to as “o’clock positions”. The head and the back should be aligned. The upper arm should be parallel to the floor. Weight should be balanced. Hip angle should be more than 90 degrees. Practitioners should have their seat positioned low enough so that they are able to rest the heels of their feet on the floor [25]. Dentists should position instruments within easy reach and avoid twisting or reaching across the body [25]. The use of loupes, surgical telescopes allow dentists to maintain a neutral working posture while increasing their visual acuity, level of motor control, and diagnostic ability (UBC, 2008) [4].

The developments of fourhanded operatory techniques contribute to working more efficiently and increase productivity [15]. Fourhanded seats were suggested, and equipment’s were developed mainly because of complaints of musculoskeletal disorders in dentists. The results emphasize the importance of continuing education in the form of training courses, and conferences.

This study illustrates clear work-related MSDs, as Musculoskeletal Disorders represent a significant barrier for dentists. Promoting prevention programs regarding ergonomic postures is a necessity to dentists during their clinical practices. Dentists must educate themselves and their staff members by adopting healthy habits that include: positioning strategies, selecting ergonomic equipment, incorporating frequent work breaks, doing physical activities, and looking for stress relief.