Multifocal leiomyo-adenomatoid tumour of the uterus a distinct pathological entity

Adenomatoid tumour is a benign mesothelial tumour, which arises from the lining of organs. This tumour generally presents in the both male and female genital tracts. In males the tumour is encountered in genital regions such as the testis and epididymis. It is the second most common extratesticular scrotal mass, following lipoma and accounts for 30 % of these masses. Also it has been seen in the pancreas. However in females it has been found incidentally in the uterine body and the fallopian tubes. Leiomyo-adenomatoid tumour (LMAT) is a variant of adenomatoid tumour, in which predominantly composed of smooth muscle. However, only ten cases of LMAT were reported in the literature review. In addition we report a case and review the other ten cases.

Adenomatoid is uncommon benign tumour most frequently seen in the genital tract of both sexes [1-6]. In the female genital tract: uterus fallopian tubes, ovaries broad ligament. In the male genital tract: epididymis, tunica albuginea, spermatic cord, tunica vaginalis, testis and prostate. In the uterus these tumours are commonly asymptomatic and typically present as subserosal or intramural small and solitary nodule [4,5].

We report a case of 45 years old multiparous female presented to a private hospital in Jeddah with history of dyspareunia and menorrhagia. Pelvic examination was normal and except for a slightly enlarged uterus. Pelvic ultrasound showed a right unilocular cystic adnexal mass diagnosed as dermoid cyst with partial echogenic posterior sound attenuation owing to presence of sebaceous material and hair within the cyst cavity together with identification of shadows of calcific and dental components. The uterus revealed multiple nodules consistent with leiomyoma. Therefore, abdominal myomectomy and right salpengo-oophorectomy were done. On gross examination, a multiple variable sized fibroids were detected, the largest piece, measuring 2.0 × 1.0 × 0.5 cm while the smallest measured 1.0 × 0.5 cm. On sectioning, the cut surface of these masses showed a worlly appearance is the right ovary measured 3 × 2 cm and fallopian tube measured 4 × 1.5 cm. Also an ovarian cystic mass was seen measured 8.8 × 6.0 × 6.0 cm, its outer surface was glistening, on cutting show smooth lumen filled with dark brown chocolate coloured content as well as fatty and hairy areas. Microscopically, the uterine mass showed hypertrophied smooth muscle bundles intersecting each other with blunted end nuclei (Figures 1A and 1B). Organized multifocal vascular and gland like areas arranged in slit-like cystic, and tubular spaces containing basophilic secretions ,these spaces are lined by cuboidal epithelioid cells with scanty, pale, eosinophilic vacuolated cytoplasm together with occasional signet ring-like cells. No abnormal mitotic activity or cytological atypia were seen. Immunohistochemical stain showed expression of calretinin and pan cytokeratin’s in the tumours cells supported the mesothelial nature of the lining epithelial cells. The smooth muscle actin (SMA; Figures 2A and 2B) showed a strong immunopositivity in smooth muscle component ,while negative in the adenomatoid component of the tumour mass, therefore it was reported as Leiomyoadenomatoid tumour (Figures 3A and 3B). 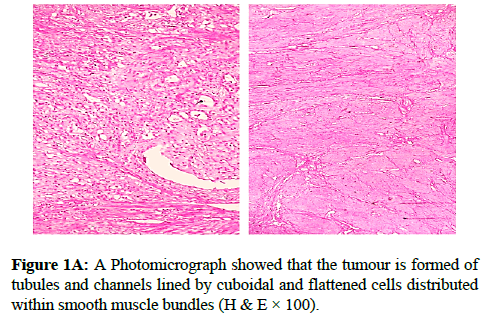 Figure 1A: A Photomicrograph showed that the tumour is formed of tubules and channels lined by cuboidal and flattened cells distributed within smooth muscle bundles (H & E × 100). 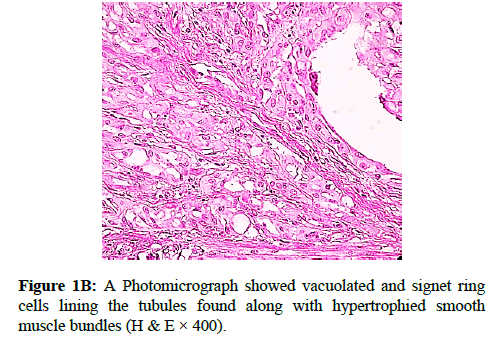 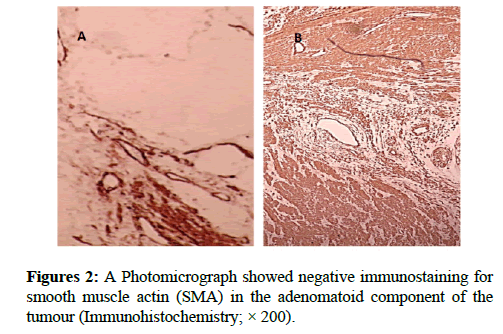 Figure 2: A Photomicrograph showed negative immunostaining for smooth muscle actin (SMA) in the adenomatoid component of the tumour (Immunohistochemistry; × 200). 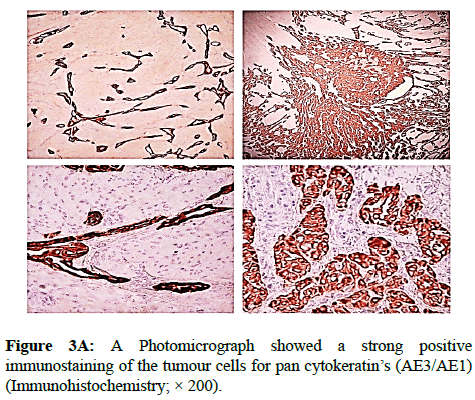 Figure 3A: A Photomicrograph showed a strong positive immunostaining of the tumour cells for pan cytokeratin’s (AE3/AE1) (Immunohistochemistry; × 200). 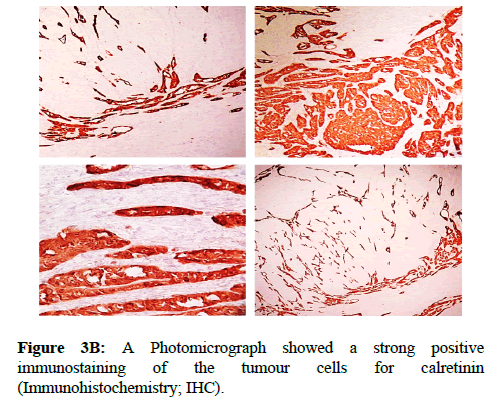 Figure 3B: A Photomicrograph showed a strong positive immunostaining of the tumour cells for calretinin (Immunohistochemistry; IHC).

The mesothelial origin of adenomatoid tumours is currently accepted based on ultrastructural and immunohistochemical analyses [6-10]. It was first described by Evans [9], then reviewed by Golden and Ash [10], who proposed the term "adenomatoid tumour" that is now accepted and in widespread use. They are commonly located in the male genital tract, in the epididymis, followed by the tunica vaginalis and spermatic cord. Extra genital tumours have also been described in places [8], such as the adrenal gland, lymph node, mediastinum, heart, pancreas [11-14] and pleura. The involvement of the mesocolon and omentum has also been reported. In women they are mostly incidental findings in hysterectomy specimens.Adenomatoid tumour usually is a typical subserosal but can be intramural .It is usually solitary mass [10,11], but some time multifocal masses are seen like in our case .It is usually located in the posterior wall near the uterine horn. These tumours usually present clinically as a solid, hyperechoic, well-circumscribed mass, between 1 and 5 cm, although a 6 cm adenomatoid tumour has been reported, these lesions can cause pain and demonstrate a palpable mass. In 1992, Epstein [1] described a variant of adenomatoid tumour with prominent smooth muscle component and the term leiomyo adenomatoid tumour LMAT was introduced. Due to the prominent smooth muscle component these tumours may be misdiagnosed as leiomyoma with malignant tumour infiltrates. Various authors believe that these smooth muscle bundles either represent entrapped.

Myometrium permeated by the adenomatoid tumour or due to reactive hyperplasia of indigenous myometrial smooth muscle. Ultrasound of the lesions may show associated leiomyomata and adenomyosis [4,5]. Grossly adenomatoid tumours appear as small, solid, firm, grayish white nodules and they are usually well circumscribed and occasionally contain small cysts [5]. Microscopically, the uterine mass showed hypertrophied smooth muscle bundles intersecting each other with blunted end nuclei (Figures 1 and 2). Organized multifocal vascular and gland like areas arrange in slit-like, cystic, branching and tubular spaces, that contain basophilic secretions, these spaces are lined by cuboidal epithelioid cells with scant, pale, eosinophilic vacuolated cytoplasm. Occasional signet ring-like cells. No mitotic activity/nor cytological atypia. The proliferative index was low (<3%). EM and IHC have confirmed the mesothelial origin of this tumour. Immunohistochemistry, the mesothelial origin of adenomatoid tumours is confirmed by its positivity for calretinin and epithelial markers, such as AE1 and AE3, epithelial membrane antigen (EMA), Cam5.2, with focal positivity with CK5/6, and CK7. Endothelial markers such as CD31 and CD34 are negative. In difficult cases in which the differential diagnosis is metastatic adenocarcinoma, a panel to include markers that are positive in carcinoma and not in mesothelial proliferation may include carcinoembryonic antigen (CEA), factor VIII-related antigen, HBME-1, MOC31, BER-EP4, B72.3 and CD15.the leiomyoma component is positive for smooth muscle marker as SMA and caldesmon while negative in adenomatoid component. These tumours are usually benign but malignant change can have occurred very rarely <1% [11-17]. The differential diagnosis of adenomatoid includes lymphangiomas, especially if the tumour is cystically enlarged. The diffuse infiltrative growth pattern has to be distinguished from metastatic signet ring cell adenocarcinoma, epithelioid, hemangioendothelioma, germ cell tumour and sex cord stromal tumour.

Special thanks for Almamlka Labs in Jeddah Kingdom of Saudi Arabia, for their continuous supports, and I appreciate Mrs. Belenda Asilum for her efforts in preparing the slides and special marvellous immunostaining.