Objective: We aimed to discuss the molecular mechanism of miR-378 in enhancing the invasion and migration of hepatoma carcinoma cells through targeted PTEN-based EMT regulation.

Method: The human hepatoma cell line HepG2 was cultured. Cells in the logarithmic phase were collected and transfected using miR-378 mimics through liposome-mediated transfection method. Successfully transfected cells and the primary cancer cells were denoted as groups A and B. Each group had eight repeated holes. The invasion and migration abilities of both groups were tested by Transwell and wound-healing experiments at 24 and 48 h. The relative miR-378 mRNA expression levels of both groups were detected by reverse transcription-polymerase chain reaction. PTEN and EMT related proteins were tested by Western blot at 48 h. Differences between two groups were analysed by SPSS20.0.

Results: The cell-leaching and wound-healing rates of group A at 24 and 48 h were lower than those of group B. Cell-leaching and wound-healing rates at 48 h were higher than those at 24 h. Differences were statistically significant (P<0.05). The relative expression levels of miR-378 mRNA and PTEN protein content of group A were significantly higher than those of group B, whereas relative expression levels of Protein Kinase B (PKB), Ki67 and Phosphatidylinositol 3 (PI3K) were significantly lower (P<0.05).

Cell-invasion ability was tested by Transwell experiment. Transwell cells were placed on a piece of culture plate, forming one top and one bottom chamber. A total of 50 μL of culture solution diluted by serum-free medium was paved uniformly on the upper chamber, and the culture plate was placed in the incubator (37°C). The cell concentrations of both groups were adjusted to 2.5 × 105/ml by serum-free medium. Then 100 μL of cell suspension was dripped to the top chamber, and 500 μL of culture solution was added to the bottom chamber. The plate was placed in the incubator and cultured under 37°C and 5% CO2. Cells in the top chamber were eliminated with a cotton swab at 24 and 48 h and then fixed with 4% formaldehyde solution. Conventional dying was observed under an optical microscope. Cell-leaching rate was calculated by randomly choosing five views of 200 amplifications. The test was repeated three times, and the mean value was used.

Cell-migration ability was tested by wound-healing experiment [4]. Two groups of cells were inoculated onto a plate with 96 holes at 2 × 106 cells per hole. A hungry culture was implemented for 12 h when cells reached 90% convergence. Wounds were then made by pipette, and cells were sequentially rinsed for three times with PBS buffer solution. Cells in wounds were added with serum-free culture medium and cultured in the incubator according to the above conditions. Wound distances at 24 and 48 h were measured and photographed. Wound-healing rate, i.e., the ratio between wound-width changes and wound width before the culture, was calculated three times, and mean results were used.

Comparison of invasion and migration abilities

Table 1. Comparison on cell-leaching and wound-healing rates of groups A and B (͞x ± s).

Comparison of the relative expression of miR-378 mRNA

The relative expression of miR-378 mRNA of group A was significantly higher than that of group B (P<0.05) (Table 2).

Table 2. Comparison on the relative expression of miR-378 mRNA between groups A and B (͞x ± s).

Comparison of the relative expression of PTEN and EMT-related proteins

The PTEN content of Group A was far higher than that of group B, but relative expression levels of PKB, Ki67, and PI3K were significantly lower (P<0.05) (Table 3 and Figure 1).

Table 3. Comparison of relative expression levels of PTEN and EMTrelated proteins between groups A and B (͞x ± s). 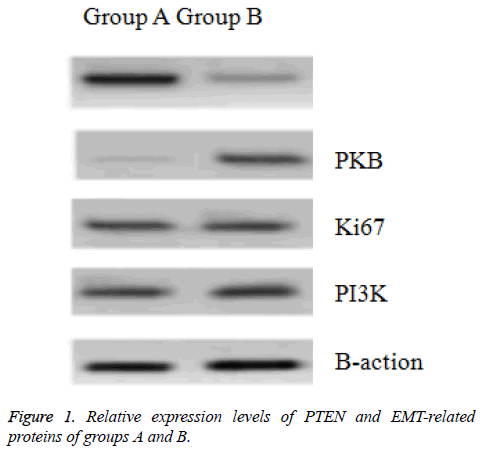 Figure 1: Relative expression levels of PTEN and EMT-related proteins of groups A and B.

In this work, we discovered that the cell-leaching and woundhealing rates of group A were significantly lower than those of group B at any time. Group A were cells transfected by miR-378 mimics, and group B were original hepatoma carcinoma cells. The RT-PCR test results of group A indicated that the relative expression level of the miR-378 mRNA of group A were far higher than that of group B, showing that miR-378 expression in hepatoma carcinoma cells was inhibited. This finding may be related to the enhanced invasion and migration abilities of miR-378. The author has reviewed recent associated studies but discovered no identical research methods and conclusions. However, a foreign study has shown that miR-378 can indeed enhance the invasion and migration abilities of HepG2. Another work has demonstrated that the relative expression of miR-378 mRNA in the blood cells of patients with viral hepatitis due to liver cancer is far lower than that in normal healthy people, implying that abnormal miR-378 expression may be closely correlated with liver-cancer incidence [6,7]. These findings require further exploration.

Research on PTEN regulation over EMT-related proteins started early. At the end of the 20th century, PTEN was cloned and became the earliest discovered cancer-suppressor gene with phosphatase activity. As a part of the PI3K/AKT signal path, PTEN plays an important role in a series of biological changes, such as cell survival, growth, proliferation, invasion, migration, and differentiation [8]. Under the regulatory effect of PETN, abnormal expression levels of PKB, Ki67 and PI3K intensify, resulting in cell depolarization and sharply weakening adhesive force. Consequently, cell invasion and migration abilities are enhanced, as manifested by cachexia. This regulatory mechanism has been verified in cells of various diseases, such as gliomas, Hodgkin lymphoma, and hematological malignant tumor [9]. Researchers reported that a low expression of PTEN in hepatoma carcinoma cells, which weakens the inhibition of EMT-related proteins, thereby significantly enhancing cell proliferation, invasion, and migration [10].