Incidence of yellow vein net disease with leaf distortion was observed on Malva parviflora grown as a weed in Barkatullah University campus, Bhopal, India during the rainy session. The begomovirus disease was suspected on the basis of symptomatology and whiteflies insects’ population on the plant. The begomovirus was detected by the PCR with the begomovirus gene specific primers. The begomovirus under study showed highest nucleotide sequence identities and distinct phylogenetic relationships of coat protein gene (CP) with several isolates of Tomato leaf curl Kerala virus (ToLCKeV). This is the first report of ToLCKeV associated with yellow vein net disease on M. parviflora and it is a new host of begomovirus from India.

Malva parviflora L. (Family Malvaceae) commonly known as cheese weed and it is an exotic annual weed or perennial herb that is native to Northern Africa, Europe and Asia. It is used in the treatment of cough, throat infection and other bronchial problems as well as stomach and intestine irritations. The flowers and leaves are emollient and used for the softening of sensitive area of the skin. Combine with Eucalyptus; it makes a good remedy for cough and other chest ailments [1].

Madhya Pradesh is a central region of India and agriculture is one of the main sectors of the state’s economy. About 73 percent population of the state is rural, which directly or indirectly depends on the agriculture. The Madhya Pradesh has plant diversity and flexible temperatures, which are favourable to the virus insect vector (aphids, whiteflies, leafhoppers, and planthoppers). There are few reports has been reported of the begomoviruses infection on Jatropha gossypifolia [2], Solanum lycopersicum [3] and Cnidoscolus acontifolia [4] from Madhya Pradesh state, India.

Begomoviruses is the largest genera in the family Geminiviridae. Begomoviruses have a circular, single-stranded deoxyribonucleic acid (ssDNA) genome and are transmitted in nature by the whitefly (Bemisia tabaci), and causes significant yield losses in economically important crop plants worldwide [5,6]. Begomoviruses generally have bipartite genomes (designated as DNA-A and DNA-B) and infect dicotyledonous plants. Based on their genome characteristics and phylogenetic relationships, Begomoviruses have been divided broadly into Old World (OW) viruses (Eastern hemisphere, Europe, Africa, Asia and Australasia) and the New World (NW) viruses (Western hemisphere, the Americas) [7,8]. Monopartite begomoviruses (have DNA-A genome only) are predominantly found in the Old World and are often associated with satellite DNAs (alpha-and betasatellites), which may or may not contribute to pathogenicity [9].

We report here, molecular detection and identification of a Tomato leaf curl Kerala virus associated with yellow vein net disease on M. parviflora from central region of Madhya Pradesh of India, based on sequence analysis of complete coat protein gene.

The total DNA was extracted from symptomatic and asymptomatic leaf samples of M. parviflora plants by Dellaporta et al. [17] method. To detection of begomovirus, the polymerase chain reactions (PCR) were carried out using total DNA as template and a set of begomovirus coat protein gene specific primers CPIT-I/CPIT-T (Acc. AM180920 and AM180921). The PCRs were set up in a 50 µL reaction mixture containing: template DNA (100 mg), dNTPs (10 mM each), primers (each 25 pmol), Taq DNA polymerase (1.5 U, Merk Pvt. Ltd), assay buffer 10X (Merk Pvt. Ltd) in a thermal cycler (Bio-Rad, USA). The PCR was done with the conditions: initial denaturation at 94°C for 5 min, followed by followed by 30 cycles of denaturation at 94°C for 1 min; annealing temperatures for 1 min at 47°C, extension at 72°C for 1.5 min and final extension cycle was 5 min at 72°C.

The sequence data from the virus isolate under study were analysed by BLASTn (http:// www.ncbi.nlm.nih.gov/BLAST) and compared with existing sequences of begomovirus species available in the GenBank database. ORFs were translated into amino acids using the Expasy tool (http://www.expasy. org/tools/dna.html). The sequence similarities of selected begomovirus species were obtained using the Genomatix DiAlign 2 program based on pair-wise alignment. Phylogenetic analyses were performed using the Molecular Evolutionary Genetics Analysis tool (MEGA v.7.1,) with 1000 replicates bootstrapping and the tree was generated with the Neighbour joining method.

During a survey in rainy session July 2016, the begomovirus-like symptoms were observed on a large number of M. parviflora plants growing in Barkatullah University campus, Bhopal Madhya Pradesh with the disease incidence about 40%. The naturally infected plants exhibited severe yellow mosaic and leaf distortion symptoms (Figure 1). A population of whiteflies (Bemisia tabaci) was also noticed in the growing area therefore, association of begomovirus with the disease was suspected. 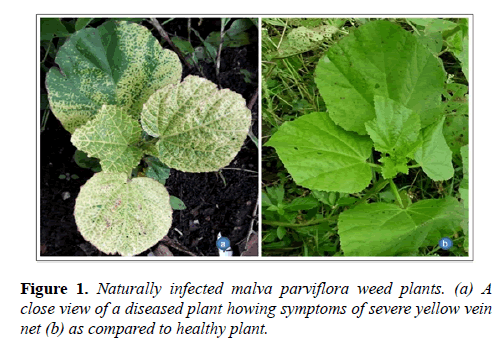 Amplification of the begomovirus by PCR

The begomovirus was detected by PCR reactions using the total DNA as template and begomovirus coat protein gene specific primers: CPIT-I/CPIT-T. During PCR, the expected bands of ~800 bp were amplified from (3/3) naturally infected symptomatic plant samples but not in a healthy sample 1 (Figure 2). The PCR products (three samples) were purified by using PCR Clean-up System Kit (Promega, USA) and purified PCR product was sequenced. The consensus sequence data of three identical sequences were analyzed by the BLASTn and complete coat protein gene of 771 nucleotides of begomovirus under study isolate was deposited to GenBank database (Accession KY511140). 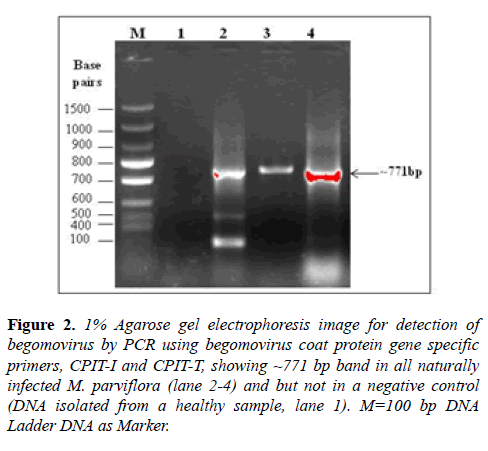 Sequence analysis and Phylogeny of under study virus isolate

During phylogenetic analysis of virus isolate under study (KY511140) with the other begomovirus isolates was done using the Molecular Evolutionary Genetics Analysis Tool (MEGA v.7.1) with 1000 replicates of bootstrapping, and a dendrogram was generated by the neighbour-joining method and viewed using the NJ plot program. 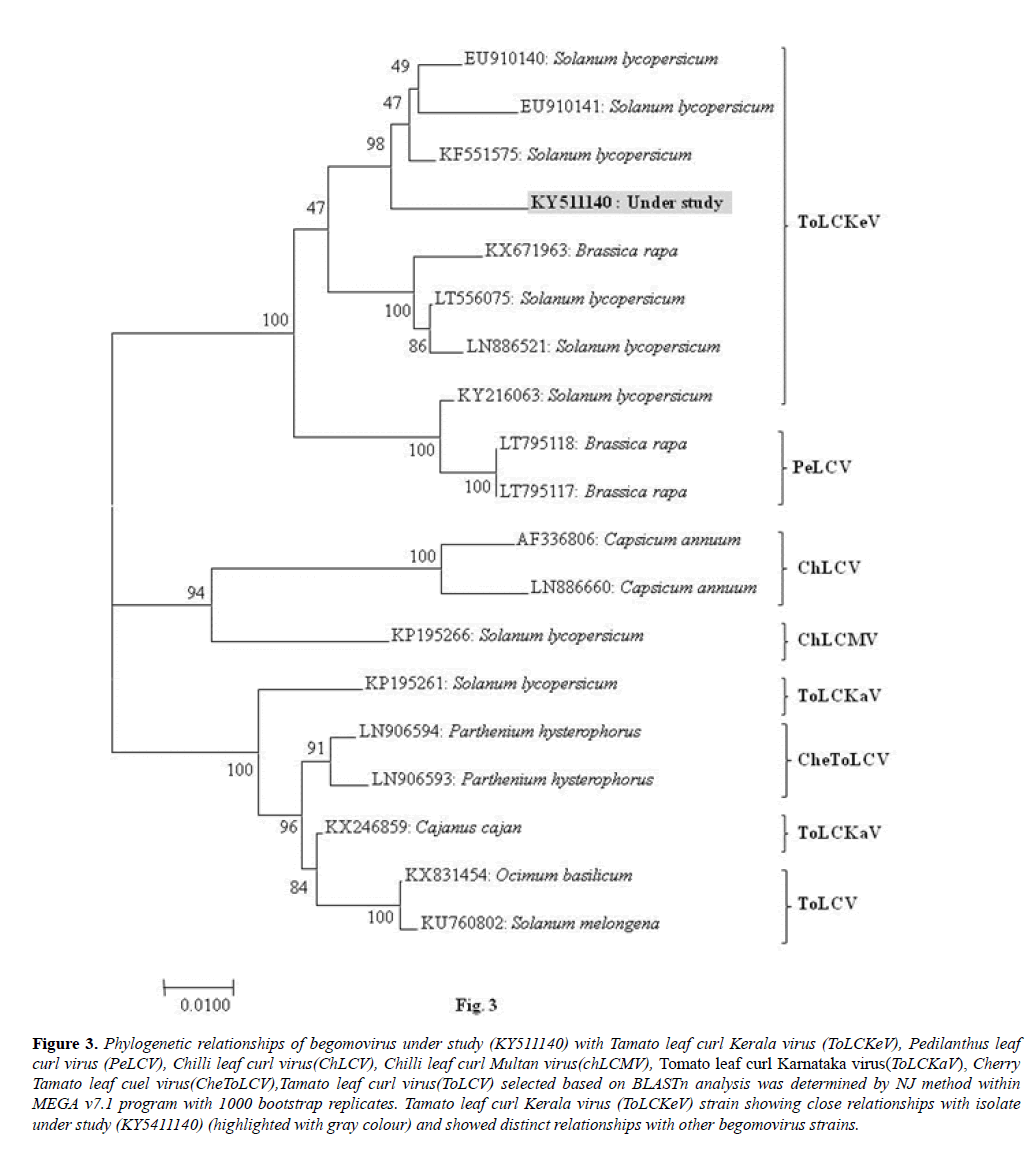 India is a large country with very diverse agro-climatic conditions. On the one hand this diverse agro-climate makes India one of the richest sources of flora and fauna in the world, but on the other hand it creates ideal conditions for plant viruses. Although it has been established that weeds can play an important role in the emergence of plant viral epidemics affecting crops in different parts of the world [18,19], they are still neglected and only limited work has been carried out to characterize the begomovirus complexes associated with different weed species in India.

Tomato Leaf Curl Kerala Virus (ToLCKeV), a virus prevalent in the tomato crop of Kerala state of India [24,25] and Alternanthera sessilis a new host of ToLCKeV have been reported from Rajasthan state, India [26].

In this study the association of the begomovirus with severe yellow vein net disease of M. parviflora (weed plant) was detected by PCR from using total DNA extracted from symptomatic leaf samples using coat protein gene specific primers for members of the genus Begomovirus, which revealed positive amplification of the expected-size bands (~800 bp). On the basis of positive PCR amplification, sequence analysis and phylogenetic relationships, the virus isolate was identified as a begomovirus that is closely related to the isolates of Tomatro leaf curl Kerala virus.

M. parvifolia acts as host for some viruses including Malva veinal necrosis virus is considered as belonging to the potato X virus group [10], Tomato yellow leaf curl virus- Isreal [11], South African Cassava mosaic virus [12],  Faba bean necrotic yellow virus  [13]). The Squash leaf curl virus from Israel was also found to occur naturally in M. parviflora [14] and Squash leaf curl virus-Malva from Jordan Valley [15]. Recently, Hollyhock leaf curl virus was identified on M. parviflora from Pakistan [16]. However, there are no reports have been published in literature from India about any kind of plant viruses including begomovirus on M. parvifolia plant.