COT (Tpl2/MAP3K8) is a serine/threonine kinase that plays a major role in the TNF-alpha production through MEK, ERK pathway and the production of other pro-inflammatory cytokines such as IL-1 beta. It's crucial role in inflammatory diseases and cancer, for finding out the best potent anticancer agent glide tool of the Schrodinger software was used for virtual screening using ligand databases like Drug Bank, MDPI and MayBridge Hitfinder against the target protein. The best compound was identified which can bind in the active site fully and showing good docking score as well as good pharmacokinetics characteristics. ADMET, MM-GBSA and DFT analysis was also done on the selected screened compounds. The compound 3-(5-{[4-(aminomethyl) piperidin-1-yl] methyl}-1H-indol-2-yl)-1Hindazole- 6-carbonitrile (DB07075) was found to be most potent among all the screened compounds. Hopefully compound (DB07075) could be used as anti-cancer agent against cancer, rheumatoid arthritis and various death leading diseases.

Protein kinases play a very vital role in the cell biology where it can modify the functioning of a protein in the cell. Protein phosphorylation is a process which can increase or decrease the enzyme activity to alter the cellular processes like transcription and translation and play a major role in signal transduction pathways which can activate other protein to be functioned. Dysregulation of the protein kinases is related with many diseases such as cancer and inflammatory disorders [1,2].

One of the protein kinase is Cancer Osaka Thyroid Kinase which is a Mitogen Activated Protein Kinase 8 (MAP3K8) (Figure 1). It involve to regulate various signaling pathways like cell survival, cell proliferation and cell death as well as various inflammatory pathways including ERK, JNK, p38, NF- κB and plays an important role in the immune system also. COT kinase activation has been done with various proinflammatory stimuli like Lipopolysaccharide (LPS), TNF, CD40 ligand through Toll-Like Receptors (TLRs), TNF receptor 1, CD40 and Interleukin (IL-1) receptor [3]. COT kinase plays an important role for the activation of the downstream pathway like MEK/ERK with the stimulation of the pro-inflammatory receptors IL-1/TNF/TLR, belongs to the receptor super families, while MAP3K Tak1 facilitate to activate the p38, JNK and NF-kB pathways (Figure 2). Talking about the structure configuration, COT kinase forms a heterotrimeric complex together with NF-kB1 precursor protein p105 and the ubiquitin-binding protein ABIN-2. Its activation depends on the IKKB which triggers proteasomal degradation of p105 and releases the ABIN-2 from the association with p105 and COT [4-6]. 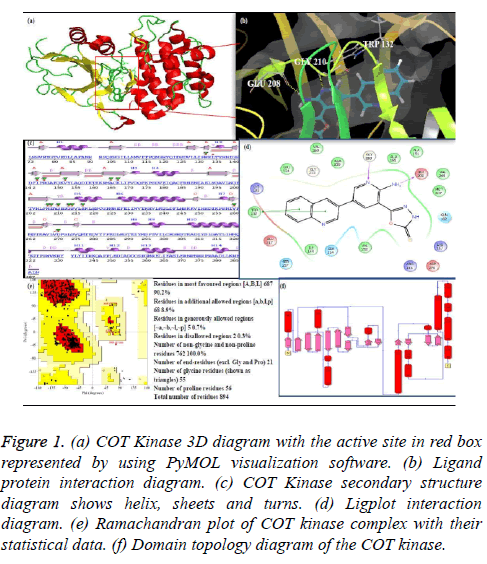 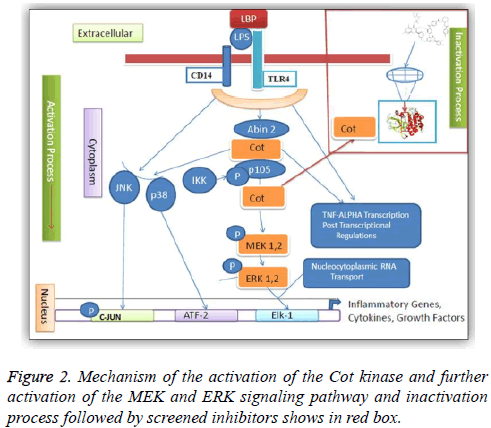 Nowadays the challenge is to find out the small molecule cancer drugs [27,28]. Structure based drug design is the accurate approach for the development of cell cycle inhibitor for cancer therapy. SBVS technique is very important to find out the drug compound very rapidly from the large library of the compounds in the medicinal chemistry research [29]. COT is the most important therapeutic target for cancer research [30]. A lot of inhibitors have been approved which shows inhibition of cancer progression. Therefore, it is a most important work to find out a selective and novel inhibitor, which can recognize the target active site easily for reducing its infectious properties. In this current study the central aim is to find out a selective and most potent inhibitor for reducing the death leading diseases like cancer, cardiac hypertrophy and Alzheimer’s.

Retrieval and preparation of the protein structure of COT kinase

The 3D structure of the COT kinase as receptor (PDB ID: 4Y83) was retrieved from the protein data bank (http:// www.rcsb.org/pdb/home/home.do). Protein preparation wizard of the Schrodinger software has been used for preparing the protein structure where bond orders were assigned and hydrogen atoms were added as well as restrained minimization step has also been done using OPLS force field with RMSD cut off of 0.30 A0.

The generation of the Grid of the receptor protein was done using the Glide protocol of the Schrodinger software where the reference ligand binding site was selected as centroid for Grid where on the active site the screened ligand bind. Scaling factor was selected as 1.0 and the partial charge cut-off was selected as the 0.25 [32].

Preparation of the reference compounds 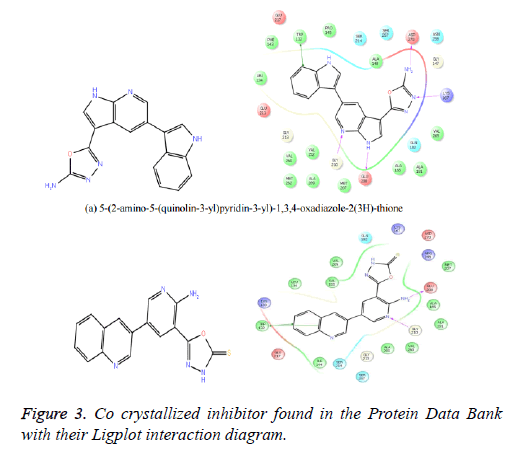 High throughput virtual screening is a bioinformatics technique where we can screen a huge number of ligands against the target protein rapidly. A total number of 62,801 ligand compounds were retrieved from the Drug Bank, MDPI and MayBridge HitFinder databases. The reference compounds were also incorporated in the ligand database. These compounds and the reference compounds were subjected to the Lipinski filtration and reactive functionality. The Glide maestro protocol of the Schrödinger software was used for the virtual screening. Docking was performed in the three different phases like HTVS (High Throughput Virtual Screening), SP (Standard-Precision), XP (Extra-Precision). The library contains a large number of compounds so that after performing HTVS screening remaining 10% was performed using the Standard-precision docking, and remaining 10% was performed using the Extra-precision docking for getting the best potent compounds. The virtual screening workflow is shown in (Figure 4). 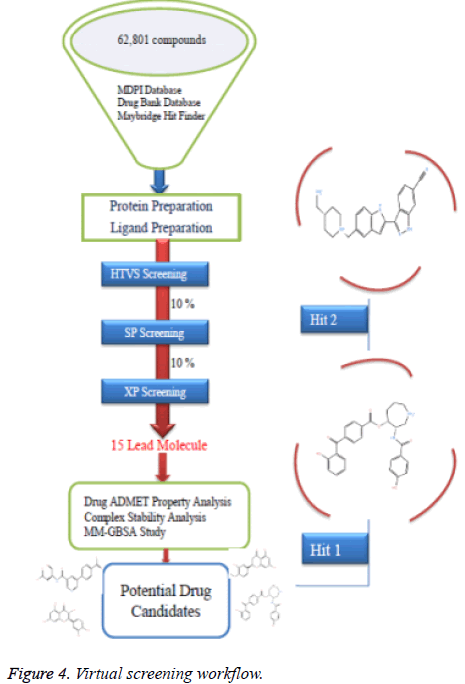 The best potent compounds were selected for finding the drug like properties. These properties follow the Lipinski’s rule of five. The properties which have been considered such as Molecular Weight (MW), Hydrogen Bond Acceptor (HBA), Lipophilicity (log P), Hydrogen Bond Donor (HBD), human oral absorption [34].

ADMET properties of the compounds are related to absorption, distribution, metabolism, excretion and toxicity through the human body. The ADMET profile is very essential for evaluating the pharmacodynamic activities of the ligand compounds. In this study we have used the bioinformatic tool admetSAR (http://lmmd.ecust.edu.cn:8000/) [35].

Molecular mechanics generalized born surface area is used to finding the drug-target binding energy and it was calculated by using Schrodinger software. This binding energy estimates the stability of the protein with the ligand complexes [36].

Database screening and docking against the target

Table 1. 2D structure of the selected inhibitors from DrugBank, MDPI and MayBridge HItFinder databases and reference compounds respectively with their docking scores. 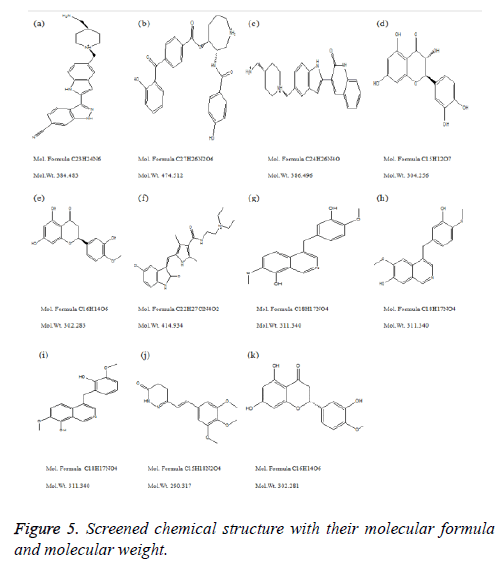 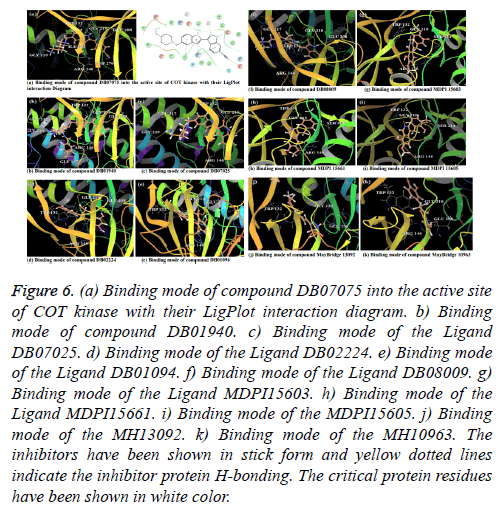 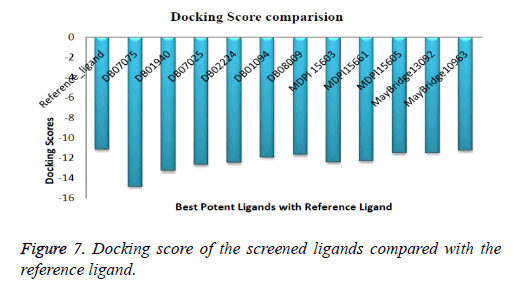 Figure 7: Docking score of the screened ligands compared with the reference ligand.

The series, according to decreasing docking scores is as follows:

Table 2. Orbital energy of the selected inhibitors of the DrugBank, MDPI and MayBridge HItFinder databases.

These selected ligand compounds were evaluated for the drug likeliness properties. These selected hits followed Lipinski’s rule of five. Evidence for drug like characteristics. A good drug compound is recognized which shows effective metabolism, action and absorbed in record time and well distributed throughout the system. The QikProp tool of the Schrodinger software was used to evaluate the drug-likeliness property analysis. Our selected various properties such as Molecular Weight (MW), Total solvent accessible surface; Hydrogen Bond Acceptor (HBA), Hydrogen Bond Donor (HBD), Predicted aqueous solubility (QP log S) and Human oral absorption were assessed. The lower molecular weight is an indication of better absorption of the drug compounds. A Log S value represents solubility, the lesser the Log S value means higher the solubility, which would enhance the absorption property. Lower the total solvent accessible surface was favorable for drug like properties. The chemical name of these eleven lead molecules with their corresponding Drug Bank Id and MDPI database Id and MayBridge HitFinder database Id has been given to their chemical properties (Table 3).

The admetSAR server was used to find out the ADMET properties of the selected drug compounds. HIA probability, Caco-2 probability, AMES test and carcinogenicity and Rat acute toxicity prediction. HIA represent the human intestinal absorption score. The compound was having high score would be absorbed better in the intestinal tract upon oral administration. BBB represents the blood brain barrier which should be high, the higher the BBB better the penetration. AMES test was performed to find out that the compounds were mutagenic or not. We found that all the compounds showed non-toxic properties except one. Carcinogenicity also reveals that all the compounds are non-carcinogens. A compound with a lower LD50 is more lethal than the compound having higher LD50. Predicting the efflux by P-glycoprotein (P-gp) metabolism of the drug compounds is carried out by a family of microsomal enzymes known as cytochrome P450 (CYP450). The two most important members are CYP3A4 and CYP2D6 which are represented in Tables 4 and 5.

BBB: Blood Brain Barrier; value closer to 1 represents better permeability through BBB; (2) HIA: Human Intestinal Permeability; value closer to 1 represents better absorption through intestine; (3) Caco-2: Human Intestinal Cell Line used for in-silico simulation; (4) AMES Test is done to detect a probable mutagen. A positive toxicity indicates the molecule for being a probable mutagen. (5) Carcinogenicity indicates the cancer causing ability of a molecule. (6) LD50: Lethal Dose 50 i.e., the amount of a drug which could kill 50% of the population of the organism on which it is being tested (here rat).

G protein: energy of the receptor without ligand

The docked pose of Drug Bank hit, MDPI hits and MayBridge HitFinder hits occupy the active binding site. It was superimposed on crystal structure (PDB ID: 4Y83) that occupy this region, The binding pattern of Drug Bank hits, MDPI hits and MayBridge HitFinder hits were found to be similar to that of the reference binding site. The figure clearly indicates that the proposed binding pose is well occupied in the active site of COT kinase complex and has a binding pattern similar to that of reference ligand (Figure 8). 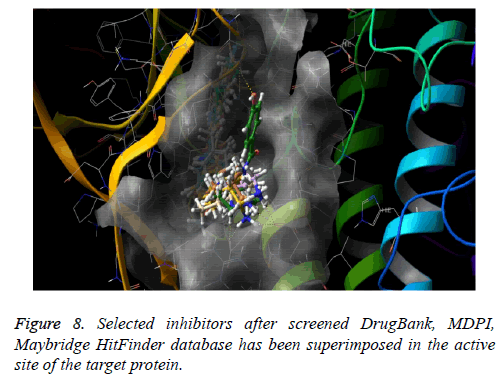 Figure 8: Selected inhibitors after screened DrugBank, MDPI, Maybridge HitFinder database has been superimposed in the active site of the target protein.

Identification of the novel and potential lead compound is step by step procedure. A range of computational tools and techniques were used to discover best inhibitors. A very large number of drugs library were subjected for the screening against the target compound (COT kinase Complex). This structure based virtual screening helped us to reduce the number of compounds which shows the greatest binding affinity to the target and showing the best inhibitory properties. Drug likeliness properties calculated by the Lipinski filter, after using virtual screening and docking using Schrodinger software, the best 11 compounds found promising. Among all compound 3-(5-{[4-(aminomethyl) piperidin-1-yl] methyl}-1hindol- 2-yl)-1h-indazole-6-carbonitrile was found to be more potent and selective. These all compounds showing the binding where the reference co-crystallized ligand bind in the hinge region. It is obvious that these hits could be as potent and selective anticancer agent of Cancer Osaka Thyroid Kinase complex.

The Research work was carried out in the Department of Bioinformatics, Maulana Azad National Institute of Technology, India. Authors wish to acknowledge the Schrodinger team for providing software facility.

Author doesn't have any funding from the institute.