Expansive open-door laminoplasty, introduced by Hirabayashi in 1977, had been widely used to treat multilevel cervical myelopathy, cervical ossification of the Posterior Longitudinal Ligament (OPLL), developmental cervical canal stenosis, etc., and the results of operations were satisfactory [1-3]. However, the posterior cervical muscles damage caused by expansive open-door laminoplasty due to extensive and consecutive decompression could inevitably destroy the stability of cervical spines [4]. Therefore, the key point of this surgical technique was to maintain the stability of posterior cervical spines [5]. In this study, to reduce the damage to the cervical stability, combined C3 laminectomy and modified C4-C7 open-door laminoplasty were used to treat multilevel cervical myelopathy and several indexes, including pre- and postoperative Japanese Orthopaedic Association (JOA) score, cervical Range of Motion (ROM) and cervical curvature index (CCI), were measured for evaluating this surgical procedure.

57 out of 74 patients with multilevel cervical myelopathy between January 2009 and October 2011 who underwent combined C3 laminectomy preserving the semispinalis cervicis into axis and modified C4-C7 open-door laminoplasty were followed. Among them, 31 were males and 26 were females and there were significant differences of surgical outcomes between male and female patients. The ages ranged from 50 to 71 y with a mean age of 63 y. Segmental or localized OPLL was observed in 17 cases and the sagittal diameter of the spinal canal was less than 12 mm in 36 cases. The mean preoperative JOA score was 8.5 ± 2.0 points (range, 4 to 11 points), and the average preoperative cervical ROM was 37.4° ± 10.3° (range, 23° to 49°), which was measured by the Nishituzi method [6] on the lateral radiographs in maximum flexion and extension. The average preoperative CCI was 13.9 ± 7.4% (range, 6.0% to 22.0%), which was calculated by the Ishihara method [7]. Intraoperative and postoperative complications were recorded. 6 months after surgery, cervical X-ray examination was performed to measure the CCI and cervical ROM. JOA score was evaluated during the last follow-up visits and the rate of neurological function improvement was calculated.

After general anesthesia, the patient was placed in the prone position with the slight flexion of neck and immobilization of head. Before laminoplasty, we decided on the open and hinged sides based on the severities of symptoms and stenosis by MRI. The more severe side was taken as the open side to enable appropriate foraminotomy and a standard midline incision was made to expose the spinous processes from C2 to C7. As a typical laminoplasty, a C3-C7 decompression was carried out, C3-C7 spinous processes were identified one by one, and C3 lamina was exposed using the Shiraish method [8]. The C3 spinous process was split using a high-speed burr and cut off from the root, and subperiosteal dissection of the paraspinous muscles was carried out to expose C3 lamina. The semispinalis cervicis insertion in C2 was preserved completely and muscles were retracted bilaterally to expose C3-C7 laminae. On the hinged side, holes for the anchors were drilled in the C4-C7 (or C5 and C7) lateral masses and four (or two) 12 mm long anchors with non-absorbable suture material were inserted into the prepared holes. On the side to be opened, a channel was made via the base of each spinous process with a hole punch. The non-absorbable suture in the end of the anchor was passed through the prepared hole in the base of the spinous process and the open side was slowly elevated to establish the C4-C7 open door. The anchor suture was tightened to fix the elevated laminae on the anchor. The C3 lamina was removed carefully using pituitary forceps and the ligamentum flavum was removed in order to completely decompress the spinal cord. The split parts of C3 spinous process were reattached by suturing and a drainage tube was placed within the wound. Within 24-72 h after operations, the tube could be removed according to the amount of drainage and the patient began ambulation after wearing a neck protection collar. The neck was immobilized until 3 weeks after surgery and functional exercise of the neck muscles was carried out after that.

Operations were successfully completed with a mean operative time of 70 min (range, 50 to 110 min). The mean volume of intraoperative blood loss was 230 ml (range, 150 ml to 600 ml). Severe postoperative complications, including spinal cord injury and cerebrospinal fluid leakage, were not occurred. 41 patients (71.9%) had postoperative early-stage neck pain, which were relieved after 3 weeks with anti-inflammation therapy. C5 nerve root palsy was observed in 6 patients (10.5%), which improved after intravenous administration of methylprednisolone and disappeared at the last follow-up visits. Wound infection occurred in 2 patients (3.5%) and delayed wound healing was obtained after anti-infection therapy and secondary debridement. 9 patients (15.8%) had obvious axial symptoms within 6 months after surgery. The follow-up duration ranged from 6 to 32 months, with a mean of 13 months. The average postoperative JOA score was 13.8 ± 2.3 points (range, 10 to 17 points), which was significantly higher than the preoperative JOA score (P<0.05). The mean postoperative cervical ROM was 28.2° ± 10.8° (range, 18° to 46°) with a mean loss of 8.2° ± 5.1° and the average postoperative CCI was 11.3 ± 8.1% (range, 4.2% to 21.1%) with a mean loss of 2.9 ± 2.4%. The average rate of neurological function improvement was 57.0 ± 19.7% (range, 29.0% to 77.3%). No closure of lamina was observed during follow-up. The postoperative neurological and radiological outcomes are summarized in Figure 1. 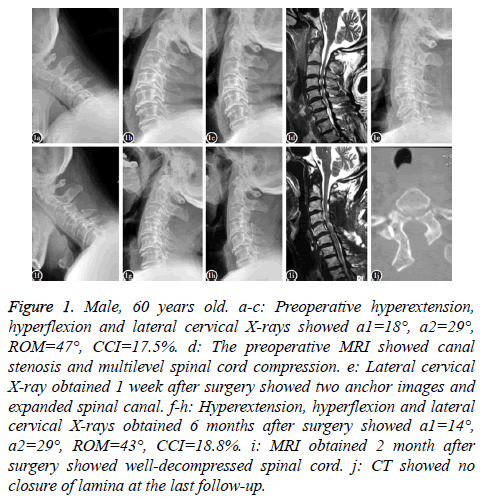 Open door laminoplasty is an ideal operation for treating multilevel cervical stenosis caused by cervical spondylosis or OPLL due to the significant improvement of neurological function of spinal cord [10,11]. There are several advantages of laminoplasty, including providing the widened spinal canal, avoiding postoperative instability of the cervical spine and protecting the spinal cord. It also has some postoperative complications, such as postoperative early-stage neck pain, C5 nerve root palsy, postoperative axial symptoms, postoperative laminar closure and so on [12-15]. The neck pain during early postoperative period may be related to the intraoperative damage to the musculo-ligament complex, which can be obviously relieved after physical therapy. In the current study, 41 patients (71.9%) had neck pain during early postoperative period and all of them were relieved after 3 weeks with antiinflammation therapy. The C5 nerve root palsy, which exhibits deltoid muscle paralysis, is mainly caused by mechanical stretch on the nerve root migrating from posterior cord in the foramina [16-18]. C5 nerve root palsy can be improved by symptomatic treatments.

Recently, with the rapid development of internal fixation technique and devices, some scholars tried to stabilize posterior elements in the open position with titanium miniplates and reestablish an intact spinal canal [23,24]. This method could significantly reduce the incidence of axial symptoms by preventing the postoperative suture stimulationinduced facet joint inflammation. However, those miniplates were expensive and the procedure was relatively complicated compared to the typical open door laminoplasty. Nakama et al. [25] suggested that the postoperative axial symptoms were related to the postoperative imbalance of flexor and extensor muscles in the neck, which mainly shown as a reduced power of the extensor. Semispinalis cervicis is an important structure maintaining the posterior cervical stabilizations. Most parts of the muscle are inserted into the C2 spinous process. During the traditional laminoplasty, the muscle insertion at C2 spinous process should be dissected totally or partially to expose C3 lamina. The dissection to the insertion of the semispinalis cervicis might significantly restrict the extension of the cervical spine. The loss of normal cervical lordosis and decreased ROM of cervical spine after surgery would cause and aggravate the postoperative axial symptoms. Takeuchi et al. [26-28] introduced the modified laminoplasty preserving the semispinalis cervicis inserted into C2 and suggested that this operation could effectively reduce the axial symptoms and maintain postoperative ROM of cervical spines. Compared with these methods, we performed a novel modified operation and C3 lamina was exposed by using the Shiraish’s method and performed total laminectomy of C3. After decompression, we reattached two parts of the separated spinous process by suturing to minimize the damage to the semispinalis cervis as possible. The main advantage of our method was that the decompression level was the same as that of traditional method and the function of posterior extensor muscles of the cervical spine could be effectively protected simultaneously. Moreover, anchoring method was applied in this operation to avoid the stimulation of suturing the lamina to the facet joint capsule and a “rigid door-hinge” fixation was provided to ensure early postoperative functional exercise and reduce the occurrence of postoperative cervical muscle atrophy, which played key role in reducing the incidence of postoperative axial symptoms. Therefore, our method could not only provide adequate decompression to effectively relieve the patients’ symptoms but also significantly reduce the axial symptoms. However, there were also several disadvantages of our methods, including the limitation in ROM of cervical spines caused by inappropriate anchoring and high incidence of neck pain due to the lack of standards for early postoperative functional exercise. Although the mean operative time was only 70 min and the surgical difficulty did not increase significantly, more applying experiences and more studies about this modified operation were still necessary to orthopedic surgeons for comprehensively pre-, intra- and post-operative treatment of multilevel cervical myelopathy.

In conclusion, the combined C3 laminectomy preserving the semispinalis cervicis into axis and modified C4-C7 open-door laminoplasty using anchoring method can improve the postoperative neurological function for patients with multilevel cervical myelopathy. In addition, the surgical procedure is relatively simple and its complications are relatively few. Therefore, this technique should be widely used in the clinical practice.

The authors declare that no competing interests exist.