Objective: This study aims to preliminarily investigate mechanisms of miR-100 in inhibiting invasion and migration of nasopharyngeal carcinoma cells by regulating ZBTB7A gene.

Methods: The nasopharyngeal carcinoma cell line CNE-2 was cultured and inoculated in a 12-well plate. Cells were divided into the overexpression group, interference group, and mock group, with four complex holes in each group. The medium was cultured for 24 h after every experiment. Invasive cells passing through Matrigel were detected using Transwell chamber, whereas cell migration rate of each group was recognized by conducting a 48 h scratch test. Meanwhile, expressions of miR-100 and ZBTB7A mRNA in each group were identified by using fluorescent quantitative polymerase chain reaction, whereas expression of ZBTB7A protein in each group was distinguished by administering Western blot.

Nasopharyngeal carcinoma is a highly malignant tumor in nasopharyngeal epithelium and is characterized by local and distant metastasis. This condition is common in South China and Southeast Asia [1]. However, the molecular mechanism of this condition has not been fully elucidated. Studies showed that microRNA (miRNA) plays an important regulatory role in occurrence, development, invasion, and metastasis of tumor [2]. Conversely, miR-100 is abnormally expressed in many tumors, mostly in the rectal and liver areas, and is closely related to occurrence and prognosis of cancer. Studies showed that ZBTB7A, which belongs to proto-oncogenes, is widely involved in tumor transformation, proliferation, and metastasis [3]. By regulating this gene, miR-100 can inhibit the spread of tumor cells. However, no study focused on its function in nasopharyngeal carcinoma. This experiment aimed to investigate movement of nasopharyngeal carcinoma cells through construction of overexpression miR-100 vector, interference miR-100 vector, and control vector. The present study also sought to detect expressions of ZBTB7A mRNA and protein and to preliminarily explore migration mechanisms of carcinoma cells in nasopharyngeal cavities.

CNE-2 cells at logarithmic phase were digested and inoculated in a 12-well plate with 5 × 105 cell/hole. Cells were divided into three groups, the overexpression, interference, and mock groups, with four complex holes in each group. Cells in the overexpression group were transfected with vector pcDNA3.1- pre-miR-100, whereas those in the interference group were transfected with vector pcDNA3.1-IN-miR-100. Meanwhile, cells in the mock group were introduced with the empty plasmid pcDNA3.1. After reaching 50% cell fusion, 5 μL liposome and 100 pmol transfection vector were added in the culture plate. The process was indicated in kit instructions. The sample was incubated for 24 h for subsequent experiments.

TranswellTM was used to detect invasive cells passing through Matrigel

Matrigel was paved on the polycarbonate membrane and cultured in 5% CO2 incubator for 1 h at 37°C. Cells in each group were suspended with DMEM medium, concentration was adjusted to 5 × 105/hole, and cells were inoculated in the upper chamber. A 10% serum medium was added to the lower chamber as chemotactic agent. After 24 h incubation, cells in the upper chamber were cleaned, fixed with 4% paraformaldehyde for 30 min at room temperature, stained using 0.1% crystal violet for 20 min, and cleaned with phosphate-buffered saline (PBS) solution. Average value of cells passing through the membrane was calculated by five different fields of view under the microscope.

When cell fusion of each group reached 75% after transfection, a horizontal scratch was performed at the bottom of culture plate using a 200 μL pipette. The sample was washed using PBS and cultured using 5% fetal bovine serum culture medium. Width of scratch was measured at 0, 24, and 48 h under an inverted microscope.

Invasive cells passing through Matrigel in each group

Cell migration rate in each group 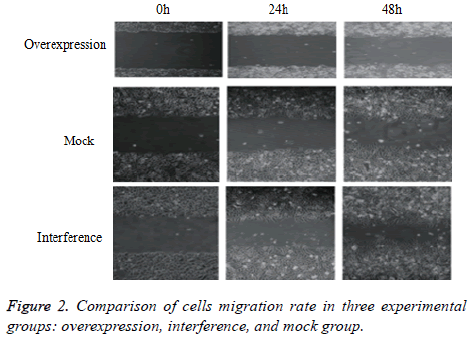 Expressions of miR-100 and ZBTB7A mRNA in each group

ZBTB7A protein expression in each group 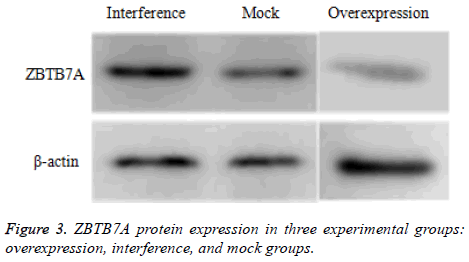 Meanwhile, luciferase activity assay confirmed that ZBTB7A is the target gene of miR-100 in gastric carcinoma. ZBTB7A, also known as Pokemon, FBI-1, or osteoclast-derived zinc finger, belongs to the POK transcription factor family and is involved in gene transcriptional regulation of cell proliferation through protein ubiquitination in regulatory targets and signaling pathways [8]. Previous studies showed that ZBTB7A can also directly bind promoter regions and transcribe and inhibit key genes during glycolysis. For example, ZBTB7A can powerfully inhibit transcription of ADP-ribosylation factor (ARF) gene. ZBTB7A is also a proto-oncogene but functions as an antioncogene in prostate cancer [9,10]. Inactivation of ZBTB7A can activate the SOX9-dependent carcinogenic pathway to promote cancer cell proliferation and invasion. On the contrary, results of this study presented decreased expression of ZBTB7A, implying inhibition of invasion and migration of nasopharyngeal carcinoma cells. These findings also indicate that ZBTB7A gene can be regulated by different methods and can perform a variety of functions. Mechanisms of miR-100 in regulating ZBTB7A expression require further discussion.

To sum up, up-regulation of miR-100 can inhibit mobility of nasopharyngeal carcinoma cells. Expressions of both ZBTB7A mRNA and protein in experiments were minimized. Therefore, we speculated that decreased invasion and migration activities of nasopharyngeal carcinoma cells mainly depend on upregulation of miR-100 to inhibit ZBTB7A expression. However, related biological mechanism and signal pathway still require further studies.