Bitterlings are small freshwater fish that use ovipositors to spawn their eggs in host mussels, and they have morphological adaptations to increase larval survival. The most well-known adaptation is the minute tubercle on the skin surface of larvae. In Rhodeus pseudosericeus the minute tubercles of larvae began to develop 1 day after hatching (formation stage), grew for 2–5 days (growth stage), reached the peak height after 6–7 days (peak stage), abruptly reduced in height after 8–10 days (abrupt reduction stage), and gradually reduced in height (reduction stage) until completely disappearing 27 days after hatching (disappearance stage). At the same time, the larvae remained in the mussels’ interlamellar space of the gills until 10 days after hatching (formation to abrupt reduction), and began to migrate to the suprabranchial cavity 11 days after hatching (reduction to disappearance). The results presented herein elucidate that the minute tubercles are the developmental dynamic structures that the bitterling larvae have morphologically adapted to prevent premature ejection from the mussel.

Bitterlings (Acheilognathinae) are small freshwater fish predominantly distributed in Southeast Asia, mainland China, Korea, Japan, and Europe, and have an unusual spawning symbiosis with freshwater mussels. During the spawning season, the female bitterlings develop a long ovipositor and spawn on the gills of mussels through the mussels’ exhalant siphons. Males, which have nuptial coloration and form territories around the mussels, release their sperm that enter the mussels’ inhalant siphons, so that fertilization occurs within the gill cavity of the host mussels. The embryos develop in the mussels for 3–4 weeks until the yolk sac is observed and they become free-swimming larvae, which then leave the mussels and begin external feeding .[1]

The life cycle of freshwater mussels comprises a phase in which the mussel larvae act as fish ectoparasites called glochidia. Before being released to find the host fish, the glochidia are usually incubated in the outer demibranchs of the adult mussel’s gills, whereas some larvae are incubated in both the inner and outer demibranchs of the gills. Although glochidia develop and are incubated within adult mussels for approximately 2–6 weeks to 8 months before being released, over 99% of the glochidia then fail to attach to an appropriate host and thus have a very low survival rate. One of the main advantages of having fish as hosts for the glochidia is that because fish perform upstream colonization, they enable connectivity in the mussel population, which mussels would not normally have because of their low mobility [2].

Coevolution is a process that consists of reciprocal evolutionary changes resulting from the interrelationship between a group of organisms and associated populations. It plays an important role in the adaptation and speciation of almost all living organisms. Prey-predator, host-parasite, and symbiont relationships are typical examples of coevolution [3]. The relationship between bitterlings and unionid mussels is considered as mutualistic because the bitterlings use the mussels as their spawning sites, while the attachment of mussel glochidia to the bitterlings enables dispersal. However, there is insufficient evidence of this relationship being mutualistic. Bitterling larvae in the mussels’ gills may interfere with water circulation, feeding, and breathing; they may also directly pressurize the gills or damage the gill epidermis. Moreover, bitterling eggs inside the gills may compete with glochidia for oxygen and space [4].

Recent studies have shown that the bitterling-mussel relationship is, in fact, a type of host-parasite interaction. Additionally, the bitterlings make sophisticated oviposition decisions to prevent ejection and have several unique physiological, behavioral, and morphological adaptations for spawning on host mussels. These adaptations include a short hatching period, a small number of large eggs, an ethanol pathway to tolerate low oxygen conditions, the development of a cutaneous embryonic respiratory system, different ovipositor lengths, the development of minute tubercles on the skin surface, and the spatial utilization of host mussels [5]. 1

The large size of bitterling eggs ensures that they fit properly into the interlamellar space of the demibranchs in the mussels. The eggs of bitterlings can be classified into four types: bulb- like, pear-shaped, spindly, and ovoid; moreover, some eggs are sticky, which is an adaptive property to prevent premature ejection from mussels [6] (Figure 1). Generally, the bitterling eggs begin to hatch approximately 2–4 days after insemination, depending on the water temperature. The bitterling larvae develop single-celled epidermal cells, called ‘ minute tubercles’, on their skin surface, which are known to play an important role in preventing the larvae from being prematurely ejected from the gills. Minute tubercles are common in all developmental stages of bitterlings, even though their larval morphology is diverse. Previous studies have reported that minute tubercles are mainly developed in the frontal part of the larvae and on the eyes of the larvae, forming a wing-like projection [7]. 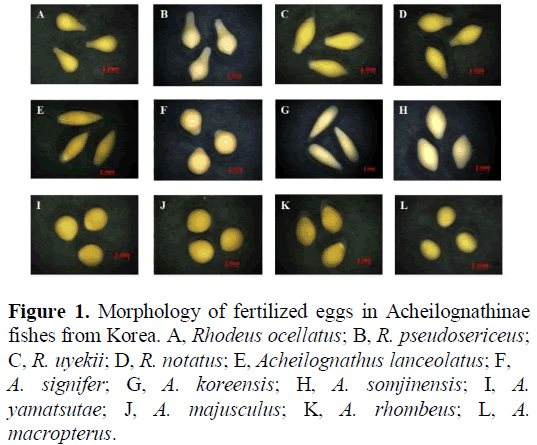 In Rhodeus pseudosericeus, the egg type was bulb-like, and the minute tubercles on the skin surface were observed immediately after hatching. The minute tubercles were observed in the following three sites: the anterior yolk sac projection covering the eyes and head, the surface of the wing- like projection composed of a pair of dorsal and one ventral yolk sac, and the posterior regions of the yolk sac and most parts of the body including the caudal fin-fold region. These were observed by scanning electron microscopy (SEM).

The larvae were found in the mussel interlamellar space of the gill demibranchs until 10 days after hatching (from formation stage to abrupt reduction stage). However, when the tubercle height became considerably smaller and shorter, the larvae began to migrate to the suprabranchial cavity 11 days after hatching (from reduction stage to disappearance stage). At this time, the larvae had a heart rate, and the caudal fin began to develop (Figure 2). 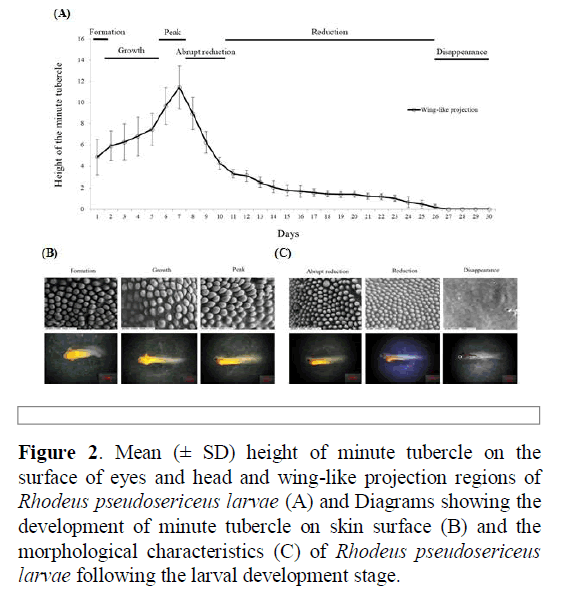 Figure 2: Mean (± SD) height of minute tubercle on the surface of eyes and head and wing-like projection regions of Rhodeus pseudosericeus larvae (A) and Diagrams showing the development of minute tubercle on skin surface (B) and the morphological characteristics (C) of Rhodeus pseudosericeus larvae following the larval development stage.

Adaptation of Bitterling for using Mussels

The mortality of bitterling larvae occurs by two main factors: premature ejection by the mussel and death in the mussel gill by asphyxiation or nutrient deficiency. In Rhodeus, an egg size that is relatively larger than those of other cyprinids and a unique egg shape are adaptive in providing a proper fit for the egg between the mussel gill lamellae. The bitterlings’ long ovipositors allow them to lay eggs deep within the gill cavity of the mussels, which reduces the competition for oxygen and space between larvae. However, the rate of water circulation and the dissolved oxygen content of the water filtered by mussels may be higher in the region near the siphons compared to the positions deeper in the mussel gills; bitterling embryos placed nearer the exhalant siphon in the gill may develop faster and survive better, but face a greater risk of ejection [8].

In autumn-spawning bitterlings, the developmental arrest of free-embryos may be either a simple physiological response to a decline in the water temperature during winter, or an adaptation to low temperatures determined by genetic factors. Many studies have reported that the inner gill of female mussels might have been selected by bitterlings in preference to the outer gills to avoid mortality due to the presence of the glochidia in the outer gill demibranchs, which act as brood pouches. Some researchers have proposed that the oxygen content of water leaving the exhalant siphon is the proximate cue for oviposition choice by the bitterlings, and that density- dependent mortality of bitterling embryos in mussels arises through the competition for oxygen [9].

The minute tubercles are formed by large unicellular epidermal cells and are presumed to be polysaccharidal in nature; studies have shown that they perform an attachment function that enables their attachment to vegetation and submerged objects. The minute tubercles occur only in larvae with no swimming abilities; when the fins (and consequently, the larvae ’ s swimming ability) start to develop, the minute tubercles are abruptly reduced. The minute tubercles in Acheilognathus and Tanakia bitterlings, which do not have a wing-like projection, develop most intensively in the foremost part of the head, and the form of the yolk projection is scaly or hilly, which is different from that of Rhodeus bitterlings Kim Hyeongsu [10-12]. The development of larger and sharper minute tubercles in Acheilognathus and Tanakia larvae compared to those of Rhodeus larvae (20 – 40 μm vs. 3 – 15 μm) is an adaptation strategy that also prevents premature ejection and allows the larvae to tightly fit in the interlamellar space of the hosts’ demibranchs. The change in the height of the tubercles on the surface of the larvae was related to the position of the larvae in the mussels and may play an important role in preventing premature ejection by mussels.

Bitterlings have a unique early life history. They lay a small number of eggs, develop unique tissue structures called minute tubercles during the early stages of larval development, have a very fast hatching time, and are unique in that they lay eggs in mussels. This lineage/clade/taxon, of which 60 species are known worldwide, evolved due to various factors, such as maturation type, development, spawning type, spawning position, larval migration in mussels, and host selection. In R. pseudosericeus, minute tubercles are developed to prevent premature ejection of larvae by their mussel hosts. Thus, this finding may enhance our understanding of the evolutionary advantages of the development of minute tubercles and the migration of larvae inside mussels to increase larval survival.