MicroRNAs (miRNAs) deregulation has been reported to play important roles in tumorigenesis and tumor development through the regulation of their targets in Osteosarcoma (OS). Hence, fully understanding the biological roles and mechanisms of OS-related miRNAs may contribute to the development of novel therapeutic targets for patients with this disease. In this study, we found that miR-34b expression was downregulated in OS tissues and cell lines. The resumption of miR-34b expression led to a significant reduction in cell proliferation and invasion of OS. Meanwhile, Cyclin D1 (CCND1) was identified as a direct target of miR-34b in OS through bioinformatics analysis, luciferase reporter assay, quantitative reverse-transcription PCR (RT-qPCR) and Western blot analysis. The results of the present study demonstrated that low miR-34b expression is involved in OS formation and progression, suggesting that miR-34b/CCND1 axis may serve as a potential therapeutic target in OS oncogenesis.

Osteosarcoma (OS), a common malignant primary bone tumor, mainly affects the long bones of the legs and arms with a high fatality rate in children and adolescents [1]. In recent years, several risk factors have been identified to contribute to OS formation and progression. These factors include ionising radiation, alkylating agents, Paget’s disease, hereditary retinoblastoma and genetic aberrations [2]. Despite the current advances in the treatment approaches for OS, the clinical outcomes and prognosis remain unsatisfactory. Recurrence and metastasis are the major reasons for poor prognosis [3]. Therefore, elucidating the mechanisms underlying OS occurrence and development is urgently needed to investigate novel therapeutic methods for patients with such malignancy.

MicroRNAs (miRNAs) are a large group of short non-coding single-stranded RNA molecules that negatively regulate gene expression through partial complementary binding to the 3’- Untranslated Regions (UTRs) of their target genes. This interaction results in mRNA degradation and/or translation inhibition [4]. Bioinformatics analysis indicated that miRNAs, which account for approximately 1% of all human genes, can modulate approximately 60% of human protein-coding genes [5]. Substantial evidence has shown that miRNAs play key roles in various biological processes, including cell proliferation, apoptosis, invasion, metabolism and metastasis [6]. MiRNAs have been reported to be aberrantly expressed in almost all human cancer types. Deregulated miRNAs may serve as oncogenes or tumor suppressors in tumorigenesis and tumor development mainly depending on the biological characteristics of their target genes [7]. Therefore, elucidating the OS-related miRNAs may provide novel and effective therapeutic target to treat this disease.

A total of 26 paired OS tissues and corresponding adjacent normal tissues were collected from patients who underwent surgery at Fourth Hospital of Hebei Medical University. No chemotherapy or radiotherapy was administered to these OS patients prior to surgical resection. This research was approved by the ethics committee of the Fourth Hospital of Hebei Medical University. In addition, written informed consent was provided by all the patients.

CCK8 assay was performed to detect cell proliferation. Transfected cells were collected at 24 h post-transfection and seeded onto 96-well plates at a density of 3 × 103 cells per well. Four time points, 0, 24, 48 and 72 h, were selected, and CCK8 assay was performed at each time point. Briefly, 10 μL of CCK8 solution (Dojindo Molecular Technologies, Kumamoto, Japan) was added to each well and incubated at 37°C for another 2 h. The absorbance of each well was determined at a wavelength of 450 nm by using a multi-well plate reader.

Matrigel-coated Transwell chambers with 8 μm pores (Coring, Inc., Corning, NY, USA) were employed to determine the cell invasion capacity. Briefly, 300 μL FBS-free cell suspension containing 5 × 104 cells was plated onto the upper chambers. Meanwhile, the lower chambers were filled with 500 μL of RPMI-1640 medium with 10% FBS. After 24 h of incubation, the cells that had not invaded the membrane in the chambers were gently removed using cotton swabs. In contrast, the invasive cells were fixed with 4% paraformaldehyde and stained with 0.1% crystal violet. Cells five random fields for each Transwell chamber were counted under an inverted microscope.

Expression and functions of miR-34b in OS

To investigate the exact roles of miR-34b in OS, RT-qPCR was performed to detect miR-34b expression in 26 paired OS tissues and corresponding adjacent normal tissues. MiR-34b expression was obviously downregulated in OS tissues than that in adjacent normal tissues (Figure 1A, P<0.05). Additionally, the expression levels of miR-34b in three OS cell lines (MG-63, U2OS and Saos-2) and human normal osteoblasts (hFOB1.19) were examined. RT-qPCR analysis results revealed that the miR-34b expression levels were lower in all the examined OS cell lines than in hFOB1.19 (Figure 1B, P<0.05). The potential roles of miR-34b in OS progression was then determined by transfecting MG-63 and U2OS cells with miR-34b mimics to increase the miRNA’s endogenous expression levels. RT-qPCR analysis confirmed that miR-34b was markedly upregulated in MG-63 and U2OS cells after transfection with miR-34b mimics (Figure 1C, P<0.05). Subsequently, the roles of miR-34b overexpression in regulating OS cell proliferation and invasion were evaluated by CCK8 assay and Transwell invasion assay. Cell proliferation (Figure 1D, P<0.05) and invasion (Figure 1E, P<0.05) were significantly decreased in the MG-63 and U2OS cells after miR-34b overexpression compared with those in the miR-NC group. These results suggest that miR-34b plays a tumor-suppressive role in OS. 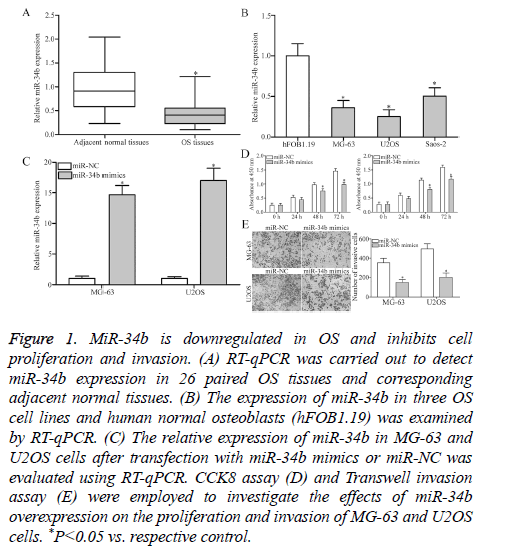 Figure 1: MiR-34b is downregulated in OS and inhibits cell proliferation and invasion. (A) RT-qPCR was carried out to detect miR-34b expression in 26 paired OS tissues and corresponding adjacent normal tissues. (B) The expression of miR-34b in three OS cell lines and human normal osteoblasts (hFOB1.19) was examined by RT-qPCR. (C) The relative expression of miR-34b in MG-63 and U2OS cells after transfection with miR-34b mimics or miR-NC was evaluated using RT-qPCR. CCK8 assay (D) and Transwell invasion assay (E) were employed to investigate the effects of miR-34b overexpression on the proliferation and invasion of MG-63 and U2OS cells. *P<0.05 vs. respective control.

CCND1 is a direct target gene of miR-34b in OS

The mechanism underlying the tumor-suppressive roles of miR-34b in OS was determined by predicting the putative targets of miR-34b by TargetScan. CCND1 (Figure 2A) was predicated as a major target of miR-34b and selected for further confirmation. For confirmation, luciferase reporter assays were conducted in MG-63 and U2OS cells cotransfected with miR-34b mimics or miR-NC and pGL3-CCND1-3’-UTR WT or pGL3-CCND1-3’-UTR MUT. MiR-34b upregulation led to a significant decrease in the luciferase activities of the WT group in MG-63 and U2OS cells (P<0.05), but not in the MUT group, when compared with the miR-NC group (Figure 2B). Furthermore, the regulatory effect of miR-34b on endogenous CCND1 production was further assessed in MG-63 and U2OS. RT-qPCR and Western blot analysis data revealed that the ectopic expression of miR-34b reduced CCND1 expression in MG-63 and U2OS cells at the mRNA (Figure 2C, P<0.05) and protein (Figure 2D, P<0.05) levels. Overall, CCND1 is confirmed as a direct target of miR-34b in OS. 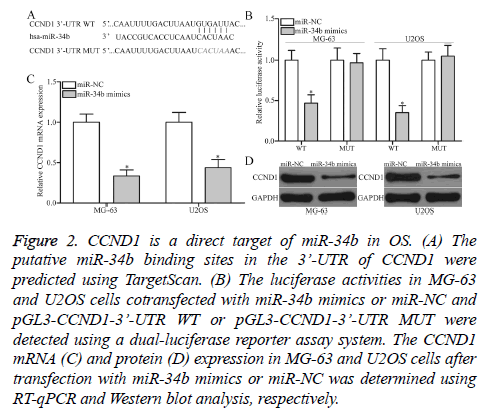 Figure 2: CCND1 is a direct target of miR-34b in OS. (A) The putative miR-34b binding sites in the 3’-UTR of CCND1 were predicted using TargetScan. (B) The luciferase activities in MG-63 and U2OS cells cotransfected with miR-34b mimics or miR-NC and pGL3-CCND1-3’-UTR WT or pGL3-CCND1-3’-UTR MUT were detected using a dual-luciferase reporter assay system. The CCND1 mRNA (C) and protein (D) expression in MG-63 and U2OS cells after transfection with miR-34b mimics or miR-NC was determined using RT-qPCR and Western blot analysis, respectively.

MiRNAs deregulation has been reported to play important roles in tumorigenesis and tumor development through the regulation of their targets in OS. Hence, fully understanding the biological roles and mechanisms of OS-related miRNAs may contribute to the development of novel therapeutic targets for patients with this disease. In our current study, miR-34b expression levels were frequently reduced in OS tissues and cell lines. The resumption of miR-34b expression decreased cell proliferation and invasion in OS. Additionally, CCND1 was confirmed to be a direct target of miR-34b in OS. Overall, these findings suggest that miR-34b plays tumor-suppressive roles in OS by regulating CCND1.

MiR-34b has been implicated in the initiation and progression of human cancers. For instance, miR-34b upregulation led to a significant reduction in breast cancer growth in vitro and in vivo [13]. Majid et al. reported that the restoration of miR-34b expression suppressed cell growth and metastasis and promoted cell-cycle arrest and apoptosis in prostate cancer [10]. Liu et al. showed that the ectopic expression of miR-34b repressed pancreatic cancer cell migration and invasion in vitro and in vivo [11]. Dong et al. found that enforced expression of miR-34b in uveal melanoma inhibited cell growth and migration and induced cell cycle G [1] arrest [14]. Xiao et al. revealed that miR-34b re-expression impeded the cell viability and proliferation of nasopharyngeal carcinoma [15]. Li et al. discovered that miR-34b overexpression attenuated cell viability and increased cell apoptosis in acute myeloid leukaemia [16]. These findings suggest that miR-34b may be developed as a therapeutic target for treating such specific human cancer types.

Several targets of miR-34b have been validated. These targets include AKT [10] in prostate cancer, USP22 [15] in nasopharyngeal carcinoma, HSF1 [16] in acute myeloid leukaemia, SMAD3 [11] in pancreatic cancer and c-Met [14] in uveal melanoma. In the present study, CCND1 was a novel target of miR-34b in OS. CCND1, located on chromosome 11q13, is a well-known oncogene frequently highly expressed in multiple human cancer types. CCND1 is also overexpressed in OS tissues [17]. OS patients with high CCND1 expression presented with shorter overall survival periods than those of patients with low CCND1 expression [18]. CCND1 contributed to OS initiation and progression by helping regulate cell proliferation, the cell cycle, cell migration and cell invasion in vitro as well as growth and metastasis in vivo [18-20]. Considering the importance of CCND1 in OS, targeting CCND1 may be an effective therapeutic strategy for inhibiting the rapid tumor growth and metastasis in patients with OS.