MicroRNAs (miRNAs) play important roles in some human malignancies. The dysregulation of miR-202-3p has been identified to correlate with tumor proliferation and apoptosis in various tumors. However, its biological function and regulatory mechanism in NSCLC remain largely unknown. This study aimed to investigate the biological role and underlying mechanism of miR-202-3p in human NSCLC. Real-time quantitative PCR (RT-qPCR) revealed that miR-202-3p expression was decreased in NSCLC tissues and cells. RT-qPCR and Western blotting revealed that mucin 4 (MUC4) expression was significantly increased in NSCLC cells. Overexpression of miR-202-3p suppressed cell proliferation and induced apoptosis in both A549 and H292 cells. Additionally, overexpression of miR-202-3p induced apoptosis by regulating apoptosis associated BCL-2/caspase-3 pathway. Furthermore, miRNA target databases and luciferase reporter assay confirmed that MUC4 was a direct target gene of miR-202-3p in NSCLC. In conclusion, our results suggested that miR-202-3p may function as a tumor suppressor in human NSCLC by directly targeting MUC4.

Lung cancer is one of the most frequently malignant cancers worldwide [1,2]. Non-small cell lung cancer (NSCLC) is a major type of lung cancer, accounting for nearly 85% of all lung cancer cases. Most patients are initially diagnosed at late stage and surgical resection has not been applicative for them, which means the mortality rate for NSCLC is relatively high [3]. The prognosis of NSCLC patients is still poor and 5-year overall survival rate is only about 5% [4]. Therefore, improvement in NSCLC treatments is urgently required. miRNAs are endogenous, noncoding RNAs with about 20-24 nucleotides [5]. They bind to the 3’untranslated regions (3’UTR) of target genes, and regulate the translation and degradation of target mRNAs [6]. Previous studies have identified miRNAs in a number of human cancers, including breast cancer [7], colorectal cancer [8], gastric cancer and NSCLC [9,10]. Among them, miR-202-3p was reported as a tumor suppressor miRNA [11,12]. Also, miRNAs may serve as biomarkers and therapeutic targets in NSCLC [13]. Thus, miRNAs are potential to be efficient therapeutic targets for NSCLC treatment.

Mucin 4 (MUC4) is a cell surface glycoprotein, widely expressed in multiple organs including lung, colon and prostate [14-16]. Canonical MUC4 is expressed as a single propeptide which is to experience following cleavage and dimerization [17]. Increasing evidence showed this protein plays an important role in various cancers. Jeon et al reported that MUC1, 4 expression levels were significantly correlated with NSCLC histologic subtypes [18]. In addition, study showed that MUC4 is highly specific tumor-associated mucin in biliary tract cancer [19]. Database showed MUC4 is a potential target of miR-202-3p. However, there was no previous report that investigate the correlation between miR-202-3p and MUC4 in NSCLC. In the present study, the expression level of miR-202-3p in NSCLC tissues and cell lines were significantly downregulated. We revealed that miR-202-3p overexpression inhibits cell proliferation and induces cell apoptosis in NSCLC cells. Importantly, we further found that miR-202-3p directly targets and down-regulates MUC4 as well as its downstream signaling p-HER-2 and p-ERK in NSCLC A549 and H292 cells.

NSCLC tissue samples and their adjacent normal tissue were collected from 30 clinical patients undergoing NSCLC resection. All these tissues were immediately snap-frozen in liquid nitrogen after surgery. This study was approved by the medical review board, and written informed consent was obtained from all the patients.

The human NSCLC A549, H292 cell lines and normal human lung epithelial cell line BEAS-2B were purchased from the Type Culture Collection of the Chinese Academy of Sciences (Shanghai, China). The cell lines were cultured according to the manufacturer’s protocols, and maintained in Dulbecco modified Eagle medium (DMEM) supplemented with 10% fetal bovine serum (FBS), at 37°C in a 5% CO2 humidified incubator. The cells were seeded in six-well plates and transfected with miR-202-3p mimics or negative control using lipofectamine 2000 transfection reagent (Invitrogen, Carlsbad, CA, USA) following the manufacture’s protocol.

The tissues and cells samples were lysed in Trizol (Invitrogen, Carlsbad, CA, USA) for total RNA extraction. Hairpin-itTM miR-202-3p qRT-PCR Primer Set (GenePharma) was used for the measurement of the relative quantity of miR-202-3p. All experiments are done at least three repetitions, and control reactions without cDNA templates were included. The mRNA expression of miR-202-3p was normalized to the endogenous expression of U6. The mRNA expression level of MUC4normalized to the endogenous expression of GAPDH. The relative expression levels of each gene were calculated and normalized using the 2-Ct method with reference to the expression of GAPDH or U6 snRNA. Primer sequences involved in the study were listed as following:

The cells viability was detected following the introduction of the MTT assay. A549 and H292 cells were respectively plated in 95-well plates at 1 × 104 cells per well and incubated for 48 h after transfection. Different time after transfection (24, 48 and 72 h), cultivated medium was removed. Wash cells twice with PBS and then cells were incubated with 20 μl MTT (Sigma, USA) reagent at 37°C. After 4 h incubation, the supernatant was removed and isopropanol was added to dissolve formazan crystals. Optical density (OD) value of each sample was measured at a wavelength of 570 nm on a Microplate Reader.

Two groups of A549 cells were plated in 6-well plates (500 cells/well) and cultured in DMEM medium for 3 weeks. Proliferating colonies were stained with crystal violet and colonies consisting of 40 cells or more were photographed for analysis. All procedures were performed in triplicate. Repeat above operations with H292 cells.

48 hours after transfection, A549 cells were trypsinized and washed with cold PBS. Resuspend the cells (1 × 106/well) in binding buffer. Annexin V-FITC and propidium iodide (PI) were added in each well under the direction of the Annexin V-FITC apoptosis Detection Kit (BD Pharmingen, San Diego, CA, USA). The apoptosis rate was then monitored by fluorescence activated cell sorter (FACS).

The 3’-UTR sequence of MUC4 or the mutant (Mut) was cloned into the downstream of the firefly luciferase gene in the pmirGLO plasmid (Promega, Madison, WI, USA). MiR-202-3p mimics and mimic Con and the report plasmid pmirGLO-Gli1 Wt/Mut were co-transfected into A549 cells using Lipofectamine 2000 (Invitrogen, Carlsbad, CA, USA). 48h after transfection, luciferase activities were detected by Dual-Luciferase Reporter System (Promega, Madison, WI, USA) and Renilla-luciferase activities were measured for normalization. All experiments were performed three times.

Data are expressed as means ± standard deviation (SD) of at least three independent experiments. The data were analyzed by using the GraphPad Prism version 5.01 software. Differences were determined with the analysis of variance (ANOVA). For all comparisons, P<0.05 was considered to indicate a statistically significant difference. 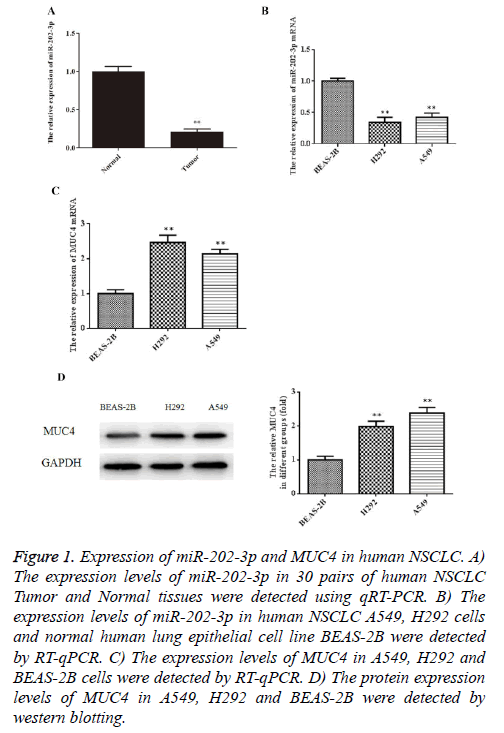 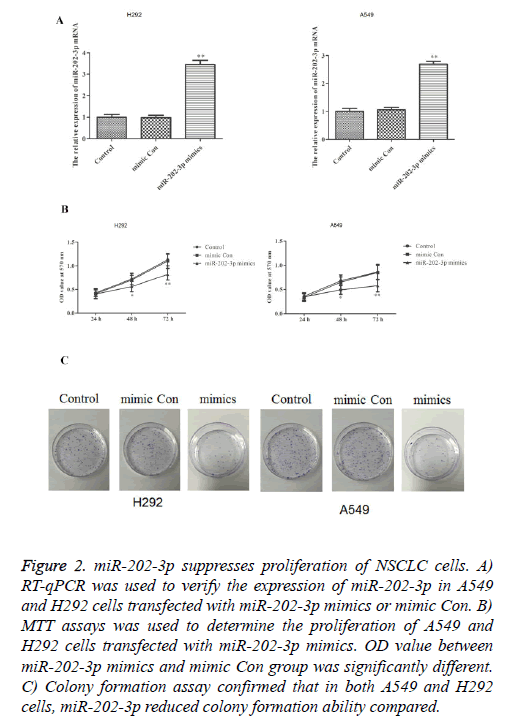 To further study the effects of miR-202-3p on the NSCLC cells apoptosis, we conducted the flow cytometry and found A549 cells transfected with miR-202-3p mimics exhibited markedly increased apoptosis rate compared with mimic Con group (Figure 3A). Furthermore, we performed western blotting to measure expression of Bcl-2 and caspase-3, which are classical apoptosis-related markers. As shown in Figure 3B, miR-202-3p transfection significantly inhibited Bcl-2 and increased caspase-3. These results demonstrated overexpression of miR-202-3p induces apoptosis and regulates apoptosis BCL-2 pathway in NSCLC cells. 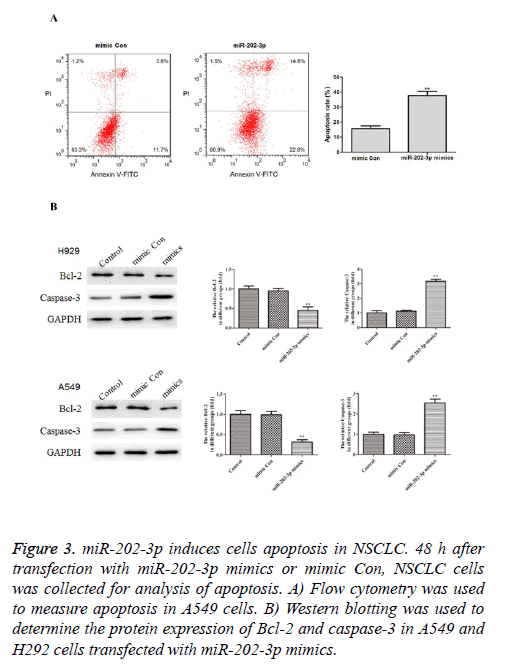 To further understand the molecular mechanisms of above effects of miR-202-3p in NSCLC, following experiments were designed. The potential target genes of miR-202-3p was analyzed by TargetScan databases. MUC4 was showed to be one of the candidate targets. Bioinformatic analysis indicated 3’-UTR of MUC4 contains a predicted binding site for miR-202-3p (Figure 4A). Luciferase reporter assays was used to determine whether MUC4 is regulated by miR-202-3p in A549 cells. As shown in Figure 4B, the relative activity of luciferase in the reporter containing a wild-type MUC4 3’- UTR was markedly decreased upon miR-202-3p co-transfection. So far, we confirmed MUC4 is a direct target of miR-202-3p in NSCLC and miR-202-3p negatively regulates MUC4 by directly binding to its 3’-UTR sequence. 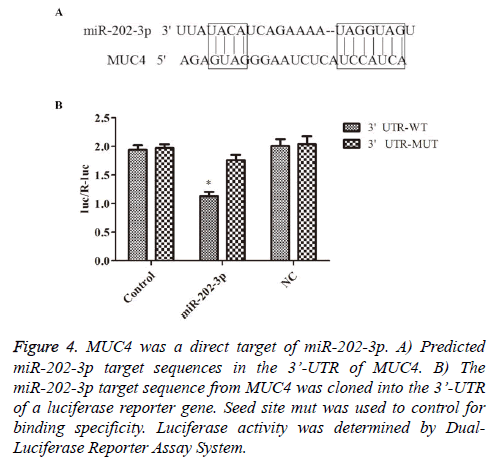 In Figures 5A and 5B, expression of MUC4 protein was significantly downregulated in A549 and H292 cells after miR-202-2p transfection compared with the control groups. To draw a more accurate conclusion, the downstream signaling of MUC4, HER-2 and ERK were also evaluated. Results showed in both H292 and A549 cells, HER-2 and ERK activation were inhibited markedly by miR-202-3p transfection while the level of ERK substrate exhibited no obvious change. Thus, miR-202-3p overexpression in NSCLC significantly inhibited the expression of MUC4 and also affected its downstream signaling. 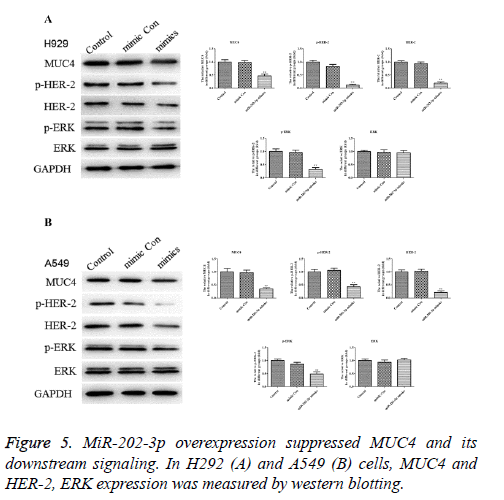 Figure 5: MiR-202-3p overexpression suppressed MUC4 and its downstream signaling. In H292 (A) and A549 (B) cells, MUC4 and HER-2, ERK expression was measured by western blotting.

NSCLC is the most frequently diagnosed carcinoma and the leading cause of cancer-related death worldwide [3]. Recent years, NSCLC shows an increasing incidence with very low survival rate and high mortality. Therefore, the underlying mechanisms in NSCLC, and new targeted therapies are in urgent need [20]. In the present study, miR-202-3p was demonstrated to significantly decrease in NSCLC tissues and cell lines. Overexpression of miR-202-3p inhibited cell proliferation and promoted apoptosis in NSCLC accompanied with dropped expression of MUC4, which was initially high-expressed in NSCLC. We also found miR-202-3p transfection affected the downstream signaling of MUC4 significantly. Furthermore, MUC4 was confirmed by luciferase reporter assay to be a direct target of miR-202-3p.

MiRNAs have been identified as the potential biomarkers for diagnosis and clinical prognosis in many cancers. Many miRNAs were demonstrated to be crucial in NSCLC [21-24]. MiR-202-3p has been reported as a tumor suppressor miRNA. For instance, downregulation of miR-202-3p modulates Mxd1 and Sin3A repressor complexes to induce apoptosis of pancreatic cancer cells [11]. In our present study, the potential role of miR-202-3p in the progression of NSCLC was explored. Our findings revealed that miR-202-3p is remarkably downregulated in NSCLC tissues and A549, H292 cells (Figures 1A and 2B). Thus, it was indicated that miR-202-3p may be involved in NSCLC development. Encouraged by the findings above, further experiments were performed to investigate the precise influence of miR-202-3p in NSCLC. Cells were transfected with miR-202-3p and the data exhibited that cell proliferation was severely reduced (Figures 2B and 2C) while apoptosis rate was elevated significantly (Figure 3A), revealing that miR-202-3p may suppress cell viability but facilitate apoptosis in NSCLC.

Furthermore, the mechanisms underlying miR-202-3p induced apoptosis were investigated. BCL-2 is a well-established apoptosis inhibitor [25]. Various modulation elements of cell apoptosis exert their action through caspase enzyme system, among which, caspase3 is probably the one correlates best with apoptosis [26]. Therefore, we assumed that miR-202-39 may affect apoptosis via BCL-2/caspase 3 pathway in NSCLC. As expected, miR-202-3p overexpression induces apoptosis and regulates BCL-2 pathway in NSCLC cells. As shown in Figure 3B, in NSCLC cells, miR-202-3p significantly inhibited the expression of BCL-2 while facilitated caspase3, which confirmed our assumption.

MUC4 has been reported to be a key regulator of various cancers. It is worth mentioning that MUC4 is widely demonstrated to affect cell proliferation and apoptosis in cancers, like pancreatic tumor [27], esophageal cancer [28]. More importantly, MUC4 has been reported to abrogate proliferative signals in lung cancer and NSCLC cell migration and invasion properties are MUC4 dependent [14]. In Figures 1C and 1D, data showed that MUC4 was significantly up-regulated in A549 and H292 cells. What’s more, our results demonstrated MUC4 is a downstream target of miR-202-3p and miR-202-3p may play a critical role in NSCLC by directly regulating MUC4 (Figure 4).

To make sure that miR-202-3p did affect MUC4 expression in NSCLC, we continued to evaluate the downstream signaling of MUC4 in NSCLC cells with or without miR-202-3p transfection. Earlier, it has been demonstrated that MUC4 interacts with HER2 and positively enhances its stability to promote the expression [15]. ERK, which belongs to the downstream mediators of HER2, was also tested [29]. As shown in Figure 5, miR-202-3p repressed MUC4 and its downstream signaling in NSCLC cells. Therefore, we confirmed that in NSCLC miR-202-3p does target at MUC4 and affect its downstream signaling. To draw an exact conclusion, MUC4 overexpression or knockout and deeper research are needed in following study. To sum up, this study suggested that miR-202-3p inhibits cell proliferation in NSCLC at least in part via negatively regulating of MUC4. Therefore, miR-202-3p might work as an effective tumor suppressing miRNA in NSCLC. Our study provides a novel and promising therapeutic target for the treatment of NSCLC.