Objective: This research was aimed to explore the expression characteristic of long non-coding RNAHOST2 and RNA-HOXB3 in cervical cancer cells and their clinical values in the occurrence and development of cervical cancer, thus providing reliable basis for targeted therapy of cervical cancer.

Methods: Cancer cell lines were cultured in RPMI 1640 medium with 10% fetal bovine serum, content of HOST2 and HOXB3 were detected with the method of real-time PCR. The expression of RNAHOST2 and RNA-HOXB3 was detected with western blotting before and after the RNAi. Finally, the possible mechanism of RNA-HOST2 and RNA-HOXB3 in playing a role in generation, apoptosis, invasion and migration of cervical cancer cell was investigated through scratch test.

Cervical cancer is the gynaecology malignant tumor of a high incidence and its mortality is still high despite the gradually mature treatment technology [1]. In a survey, the World Cancer Research Organization found that there were more than five million new patients with cervical cancer worldwide each year, in which the mortality rate accounted for more than half [2]. Many studies and analysis have shown that there were some correlations between the infection of genital tract and the imbalance of vaginal flora [3,4]. The imbalance of vaginal flora mainly results from changes in bacterial community structure, which alters the original flora advantages and causes cancer at rapid propagation of large numbers of pathogenic bacteria further suppressing beneficial bacteria.

The molecular markers of cervical cancer in recent years have become the focus of clinical research and the oriented researches can not only provide effective indexes for early diagnosis, but also guide clinical medication and development of novel targeted drugs [5]. Therefore, it is of great significance to improve the life quality of cervical cancer patients by carrying out relevant researches on the disease characteristics of cervical cancer to improve the diagnosis and treatment system [6]. Studies have shown that LncRNA, with the proportion of about 4%-9%, is an important part of the human genome and belongs to functional RNA molecules in property and cannot be translated into proteins. It is mainly located in the nucleus or cytoplasm with the length >200 nt and can regulate the expression of multiple genes [7,8]. It is an important gene involved in the circulation and function of the human body and may take part in the occurrence and development of a variety of diseases as well as a series of tumor progress and process [9,10]. Therefore, related molecule of specificity is a breakthrough point in the study of malignant tumors from the point of view of molecular biology. In 2003, Rangel and other partners [11] discovered, for the first time, HOST2 (Human ovarian cancer-specific transcript 2) and HOXB3 (Homeotic genes B3) in cervical cancer tissues. But there remains a large gap in the research on the significance of LncRNA-HOST2 and LncRNA-HOXB3 expression in cervical carcinoma. In this study, the expression and biological function of LncRNA-HOST2 and LncRNA-HOXB3 in cervical cancer were analyzed to provide a reliable basis for the development and experiment of new drugs.

RPMI 1640 medium of 10% fetal bovine serum and plus 1% (V/V) penicillin/streptomycin (1% PS) was adopted to culture cervical cancer cells and the culture box was set at 37°C, 5% CO2. When the cells could grow adhering to the wall to the density of about 70%-80%, cell culture fluid was blotted from the culture dish and 1 mL 0.25% trypsin was added to the incubator for digestion after PBS washing, about followed by the observation under the microscope after 1 min or so. The digestion was terminated with the addition of culture liquid when the cells became round shape and the sample with the appropriate density was re-suspended in fresh cell culture medium and about 1/3 of cell suspension was taken for subculture.

Firstly, the density of cervical cancer cells was controlled to be 1.5 × 105 cells/mL and the cells were inoculated on the 96- wells plate with 100 μL/hole. Three groups were established, namely cervical carcinoma group and normal cells group and blank group, with each group added with the same amount of culture medium for 100 μL.

After the culture at the temperature of 37°C with 5% CO2 respectively for 72, 48 and 24 h, 20 μL MTT (5 mg/mL) was added to each well, centrifuge was conducted after 4 h incubation with the same environment. Then the medium was discarded and 150 μL DMSO crystal was added and the absorbance value (the site of 490 nm) was detected by way of microplate reader. After the completion of above operations, average cell proliferation inhibition rate in three groups was calculated with a repetition of 3 times (n=5). IR=(1- experimental group A490/ control group A 490) × 100%.

Extraction of total RNA by TriZol

A total of 106 cervical cancer cells were extracted and sequentially treated with TriZol and chloroform, isopropanol was added to the colorless liquid, 70% ethanol was used for sedimentation after the precipitation of RNA, RNase free water was moderately heated to dissolute RNA and 1.5 μL was taken out to perform the measurement.

Inoculation of cervical cancer cells was conducted in 6 well plates with the cell density of 2 × 105/well, total RNA was extracted for the purity test with the absorbance of A260/A280 (1.8~2.0), RNA content was determined and HOXB3 and HOST2 mRNA expression were detected by means of RT-PCR with β-actin as internal reference, primer's sequences: sense and antisense strands are respectively 5'- TCAGGGATGGTGAGAGATCC-3' and GAATGGGCAAACCTTCAGTC-3' with the amplification length of 120 bp and sense and antisense strands are respectively 5'-CTCCATCCTGGCCTCGCTGT-3' and 5'- GCTGTCACCTTCACCGTTCC-3' with the β-actin amplification length of 268 bp. RT-PCR reaction conditions: after respective pre -degeneration at 95°C for 5 min came the degeneration for 30 s at 90°C, the temperature was controlled as 55°C 45 s, it was heated to 72°C with an extension time of 0.5 min, circulating the above cycle for 35 times; The time was extended by another 10 min under the same condition after the finishing of all circulation. PCR products were identified by agarose gel electrophoresis, gel imaging was photographed and analyzed to obtain the gray value of the gene, and the ratio of the gene content to -actin was detected with a repetition of three times.

Cells at the exponential growth phase were inoculated into 100 mm dish with each well 10 × 105 cells, the cells were collected after being planked for 24 h, protein was extracted by pyrolysis of RIPA cell lysate with the BCA quantitative detection of its concentration. After quantitative analysis of the protein, 40 μg protein sample was added into the gel electrophoresis well, and then was transferred to the buffer to conduct transmembrane after electrophoresis on the condition of 50 V, 30 min and 120 V, 1 h. At the end of trarsmembran, 5% closed milk powder was used to seal for 1 hour, and the primary antibody (1:1000) and secondary antibody (1:2000) given in the experiment were added to carry out the hybridization, ECL luminescence kit was adopted for color detection hybridization signals were detected. 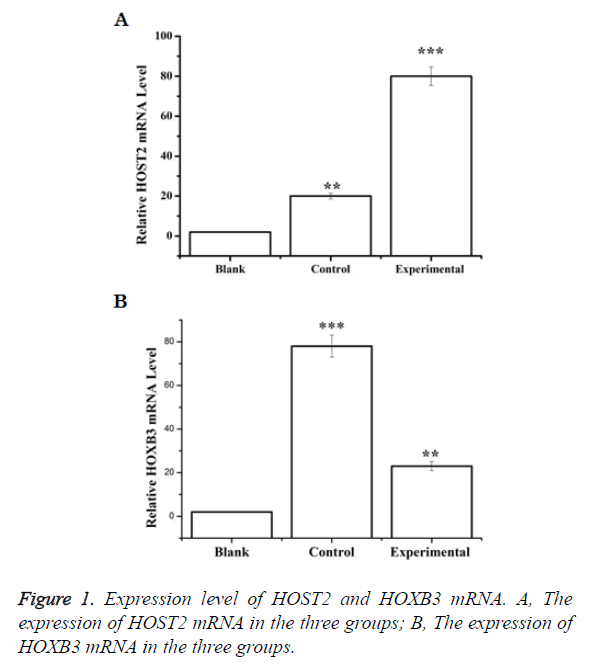 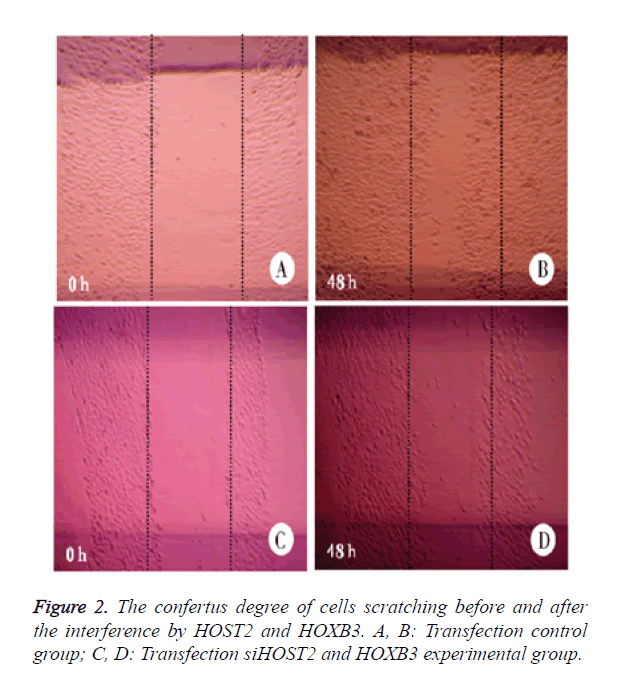 MTT results showed that: compared with the control group, the proliferation of cervical cancer cells was significantly inhibited by HOST2 and HOXB3 of statistical significance (p<0.05) (Figure 3). 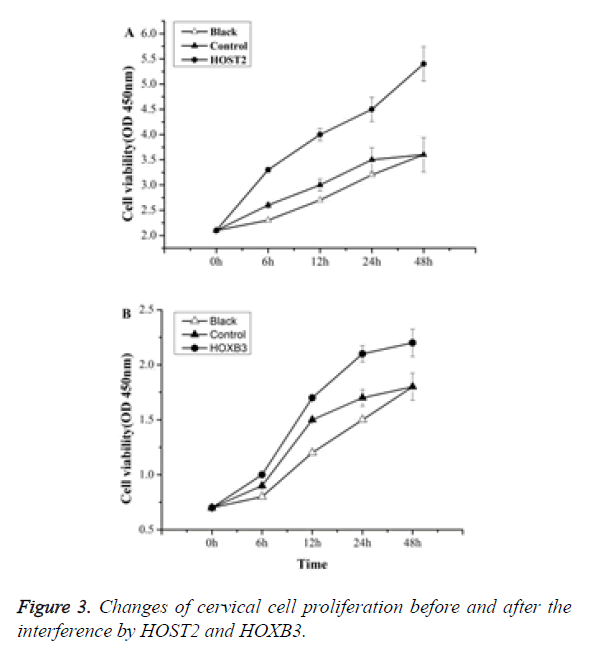 Figure 3. Changes of cervical cell proliferation before and after the interference by HOST2 and HOXB3.

The structural change of vaginal flora

Under normal conditions, the female vagina resident flora (RF) accounted for 56%, crossing bacteria, (CB) 28%, crossing protozoan and viruses (CPV) 12% and others 4% (Figure 4A). With a suffering from cervical cancer, the proportion of RF dropped to 42% while CPV increased to 23% (Figure 4B). Types of vaginal flora are shown in Table 1. 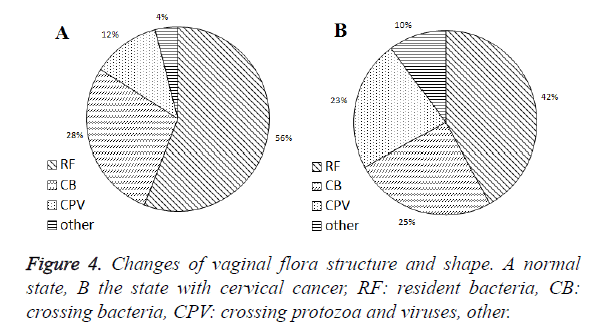 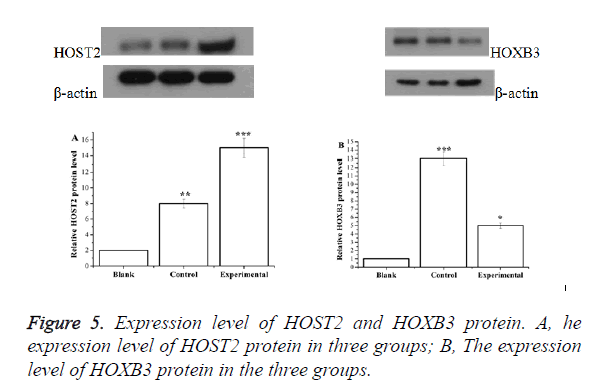 LncRNA participates in the regulation of gene expression through different pathways, such as epigenetics, transcriptional and post transcriptional levels. It also takes part in the occurrence and development of a variety of diseases. In the past decades, many studies have shown that lncRNA had strong correlation with apoptosis, invasion and metastasis of human malignant tumor cells [12].

In 2003, Rangel and his colleagues identified, for the first time, 5 transcripts of specific expression in ovarian cancer tissues and they were named HOSTs [13]. Among them, HOST1 is the same with CA125, HOST3 relates to protein claudin-16, HOST4 encodes a small amount of polysaccharide of and connects with protein LP and HOST5 encodes type II sodium dependent phosphate transporter SLC34A2. The HOST2, however, is a new gene without open reading frame, unable to encode a protein with the known length of 2999 nt. The results of this study showed that content of HOST2 in cervical cancer cells increased and structure of bacteria also changed. Probably because structural changes of vaginal flora led to alteration of HOST2 content in cells, the up-regulated HOST2 expression plays a part in a series of pathological progression of cervical cancer cells, suggesting that HOST2 may be used as a new potential target for the treatment of ovarian cancer [14].

Homeobox (HOX) takes part in the process of cell proliferation and differentiation during embryonic development. And it is of abnormal expression in cervical cancer cells. HOX genes contain four clusters currently divided into A, B, C, and D [15]. Many studies have shown that HOXA genes has significant correlation with cervical cancer and HOXB gene family contains 10 bases [16,17]. In the animal experiments, it was shown that the high expression of HOXB3 had a significant effect in promoting tumors, and the mice in the study had cancer about half a year [18]. Studies of Starkova and other partners [19] also confirmed that there was a significant correlation between the occurrence of cancer and the high expression of HOXB3. The test results showed that HOXB3 mRNA expression was strikingly down-regulated after 48-hour treatment of the cervical cancer cells, indicating the structural change of vaginal flora against cervical cancer was associated with its regulation of HOXB3 gene, but the specific mechanisms for therapy still need further studies. 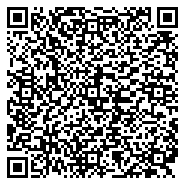