Cutaneous T cell lymphomas (CTCL) represent a hetero-geneous group of T-cell malignancies that commonly ma-nifest in the skin, but can ultimately involve the lymph nodes, blood, and visceral organs [1,2]. By far the most common variant of CTCL is mycosis fungoides and its leukemic variant Sézary syndrome, which occurring in about 5% of all cases of mycosis fungoides (MF) [2]. MF is a malignant lymphoma that imposes a tremendous physical as well as psychological burden for patients be-cause of the highly visible nature of the disease and the lack of available curative therapy [2]. MF characterized by the infiltration of the skin with plaques and nodules composed of T-lymphocytes [2].

Occurrence of MF increases with age and it occurs more frequently in men than in women, it is approximately twice as common in men as in women and it is more common in blacks than in Caucasians, blacks have twice the incidence of whites, regardless of sex and age [3,4]. MF presents in early stages with patches and plaques that affect any area of the skin which then evolve into palpable plaques [5]. Later stages are characterized by the onset of tumors and erythroderma eventually with blood, lymph node and/or systemic involvement which then lead to in-fection as the skin turns into ulcerating, necrotic tumors [6,7]. Diagnostic of MF is considered to be challengeable and difficult due to the varied clinical and histological the disease [8]. However, the prognosis of MF is best esti-mated using the tumor-node-metastasis-blood (TNMB) staging criteria that shown in Table 1 [9]. 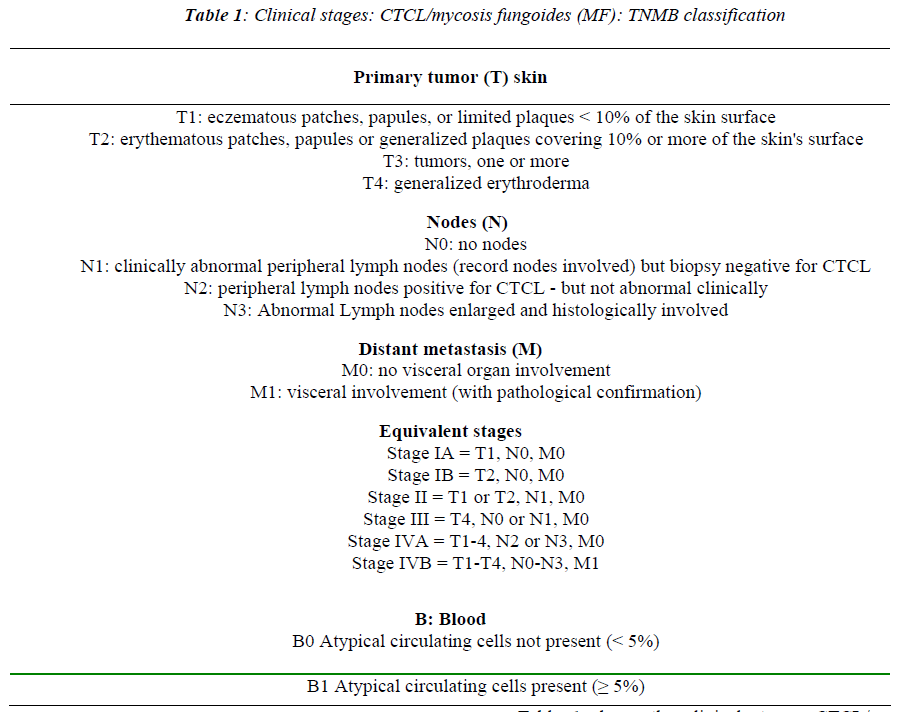 The lesion is superficial with depth of 1 cm which means that the treatment has to cover the major portion of the body and has to be performed with electron beams of an average energy of 3–5 MeV [10].

The aim of this study is to determine an acceptable dose variation using One-Dose MOSFET detectors in the treatment of mycosis fungoides with total skin electron beam and compare it with the electron prescribed dose.

One-Dose MOSFET (Sicel Technologies,Inc, Morrisville, NC, USA distributed by MedTec, Orange City, IA,USA) detectors were used to obtain real-time dose measure-ments of skin does during the treatment of total skin electron therapy (TSET) and then compare it with the pre-scribed dose. The system is small with a measured area of 300 × 50 μm and it comprised of a wireless detector that is easy to use and is small in size, measuring 3.5 × 0.7 cm2. The accuracy of the detectors, as specified by the manufacturer, is ± 1.0 cGy for a dose of less than 20 cGy and ±5% for a dose of 20 to 500 cGy (Sicel Technologies Inc). The detectors are factory calibrated with a Co-60 beam with full build-up conditions. They are normalized to a 6-MV photon beam; each detector is valid for one used only [11].

Six patients were selected for this study and the clinical and pathological characteristic of the patients are shown in Table 2. All patients were treated for their MF by the TSET protocol that used at King Faisal Specialist Hospi-tal and Research Center, Department of Radiation Oncol-ogy, Riyadh, Saudi Arabia. The protocol called for a standing position using dual angled fields in order to achieve the greatest dose uniformity along the patient's longitudinal axis (the height of the patient) as suggested by AAPM report 23 [1]. The treatment distance is an ex-tended source to skin distance (SSD) of (375 cm) with field-size 36 cm X 36 cm. A wooden frame with height of 40 cm was used to provide a mount for the large acrylic scattered. It is also used to raise the height of the patient’s feet, where under-dosing could occur during the treat-ment. Fixed foot patterns drawn on the wooden base to insure the position reproducibility of all the different standing positions and to assist in the treatment setup. A set of ropes drape down from the ceiling in the treatment room to provide support for the patient as one stands for treatment as shown in Figure 1. The collimator angle is zero where the gantry angles are one set 18 degrees above horizontal, and the other angled 18 degrees below horizontal, so that the dose distribution is uniform verti-cally from head to toe and that beam points above pa-tient’s head and below patient’s feet, respectively, in or-der to minimize contaminant x-ray dose. No degrader was used in front of the patient. We have used a normal dose rate of 400 Mu/min on a Varian Linac 2300 C/D linear accelerator. Shields are used for eyes, nails, and toes as prescribed. 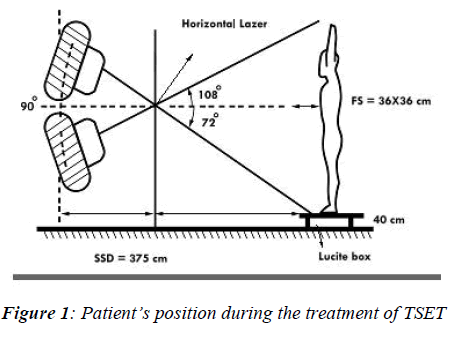 Figure 1: Patient’s position during the treatment of TSET 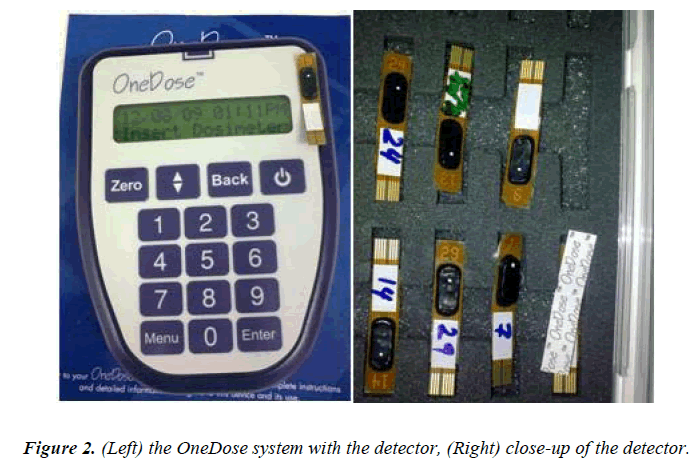 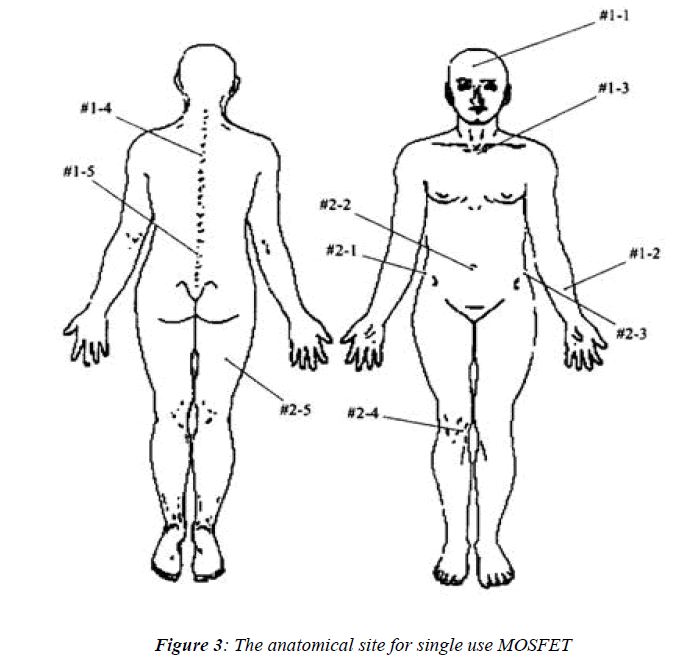 Figure 3: The anatomical site for single use MOSFET

Data from each sample were run in duplicate and ex-pressed as means ± SD (cGy, n = 6 patients). The results were compared using one-way ANOVA analysis fol-lowed by Tukey’s test for multiple comparison tests. Means were considered significantly if P < 0.05.

Figure 1 shows the patient’s position during the treatment of TSET. Figure 2 shows the One-Dose MOSFET system (left) with the detector and close-up of the detector (right). Figure 3 shows the anatomical site for single use MOS-FET.

Total skin electron therapy (TSET) is a complex method of delivering superficial radiotherapy to entire skin sur-face. However, it remains one of the most effective modes of treatment for mycosis fungoides. The confined progno-sis of treatment considered to be good if the patients di-agnosed in the early stages [13] the most widely used TSET method is the dual six-field technique known as the Stanford method [12].

Using One-Dose MOSFET detectors is an immediate rea-dout after irradiation. It has the privileges of small size, permanent storage of dose, wireless set-up and factory calibration [14, 15]. It is simple to use with no modifica-tions to the unit is required and no sophisticated treatment apparatus is necessary , which thus make the One-Dose MOSFET detectors compliant and effective in evaluation of prescribed skin dose variation during total skin electron irradiation for treatment of mycosis fungoides [15].

The aim of this study is to determine an acceptable dose variation using One-Dose MOSFET detectors in the treatment of mycosis fungoides with total skin electron beam and compare it with the electron prescribed dose.

In our current study One-Dose MOSFET detectors showed that for all measured points there was variation in skin surface dose that varies of 102% to 110% when comparing the surface prescribed dose as summarizes in Table 3. Range of percentage MOSFET dose to the fore-head points was not significantly different with mean and stander deviation range between 108.45 ± 1.91 and 103.63 ± 2.32 for all selected anatomical points as shown in Table 3. When the measured skin dose compared to prescribed dose gave a range of 108.12 ± 5.69, where it showed the same effect to the left arm point with a range of 104.22 ± 5.85. For sternal notch it showed the range of 104.02 ± 3.90 sup post back point measured dose with single use MOSEFT showed a range of 105.11 ± 2.93.

Table 3: Measured skin doses (means ± SD, and range of % prescribed dose, n = 6 patients) for selected points in pa-tients with MOSFET during TSET treatment with Linac 2300 CD. The skin dose was measured for three fractions for each patient.

The reproducibility of One-Dose MOSFET was found very well with a standard deviation of ± 5.51 % for all of the selected point’s measurements for all patients during the treatment of TSET. One-Dose MOSFET detectors results showed a reasonable agreement with prescribed doses with no significant different.