Agriculture refers to cultivation land and breeding plants and animals to provide food, fiber and other essential products to sustain life. The world’s population has been increasing at a faster rate and approximately it reaches to 9.6 billion by 2050. The food production should also be increased by 70% by 2050 to feed the increasing population; hence there is need for advanced technologies in the agriculture industry. Without implementing modern agricultural techniques in farming, current population levels could not meet sustained food and projected near-term population growth would create problems that would destabilize the current social and political order of globe. Relatively recent innovations in seed technology, chemicals and fertilizers have enabled agricultural producers to increase their productivity to meet the ever-growing demands of a hungry world population. Even with the increases in agricultural productivity, however, new challenges for the agriculture industry to supply of food to the growing global economy with sufficient supplies of agricultural staples are greater now while comparing to before. A new revolution similar to the one that took place during the period of the 20th century is taking place all over the world to meet the expected demand by the growing population in the world and it also increased standard of living.

•The plant breeding and CRISPR (clusters of regularly interspaced short palindromic repeat) plants market is estimated to increase from USD 7.6 billion in 2018 and to USD 14.6 billion by 2023, at a CAGR of 13.95%.

Economic growth and global industrialization are inextricably linked to the continuous availability, access, diversity and modernization of its agriculture and its allied sector. Agriculture, in fact, plays an important role in whole goals and endeavors to attain fiscal development.

A lot of the present developed economies initially struggled hard to make their agricultural sector stronger. The states at a priority basis supply monetary help to the farmers, researchers and scientists with a plan to boost their agricultural inventions. Agricultural science is among one of the best career options of a study, because of the lack of information and proper guidance, peoples generally under-estimate this field. Each and the every requirements and need of creatures on globe including food, clothing and shelter are straight forwardly rewarded by agriculture sector.

A continuous research work is involving in this field to provide the maximum requirements to the increasing population of the world. Essentially, the agricultural land expansion might be taken place in developing countries of the world. Consequently, the importance of agriculture to society effects on our quality of life, food, nutrition, clothing and locality where peoples are living.

Because of the relative decline of agriculture sector since the 1960s, Spain’s rural population has been decreased and many farms vanished. Spanish agriculture has remained backward by western European standards: capital investment per hectare is about one-fifth the average of Organization for Economic Co-operation and Development (OECD), and the vast majority of farms are small scale. Since Spain joined the European Economic Community (EEC) in 1986, the Spanish agricultural sector had to respect Europe-wide policies. As a result, many small-scale farmers, especially in grape growing and dairying, had to cease. Since the mid-1990s, however, the amount of agriculturally productive land (especially lands cultivated by organic farming) in Spain has increased through irrigation and the conversion of fallow lands.

• Vegetables, fruits, and cereals are the major crops, which are accounting for about three-fourths of Spain’s agricultural production (in terms of value), with cereals the main crops.

• Barley and wheat, the major crops in Spain, dominant on the plains of Castile-León, Castile–La Mancha, and Andalusia

• Paddy (rice) is grown in coastal Valencia and southern Catalonia.

• Corn (maize), grown in the north, is a major fodder crop.

• Other crops include cotton; tobacco (grown in Extremadura); sugar beets (grown mainly in the Duero and Guadalquivir valleys); olives (produced in the south), a large portion of which are used for oil; and legumes (beans, lentils, and chickpeas).

Fruit growing is also significant, with citrus fruits, especially oranges (grown in the regions of Valencia and Murcia), being of greatest importance. Other fruit crops include apples, apricots, bananas, pears, peaches, and plums. Spain also produces vegetables like tomatoes, onions, and potatoes and nuts like almonds.

Spanish agriculture is characterized by diversity, between different types of production, farming systems and regions. Andalusia has very large latifundia which is producing olives and employing day labourers. It also has intensive conventional and organic farming of vegetable and fruit production under greenhouses in Almeria and Huelva. Castillay Leon is a region of raising crops. Catalonia has become one of the main European regions for livestock farming and is predominated by small to medium scale family farming. 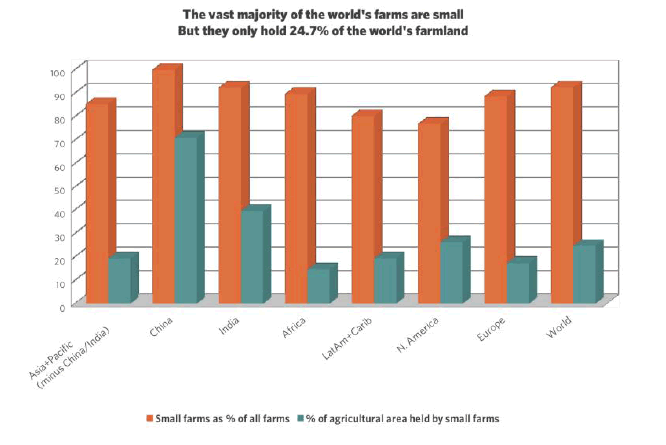 At the same time, the entire Spain has experienced the same evolution since the 1960s, marked by modernisation, mechanisation, specialisation and intensification of agricultural production sector. This evolution, led by the government, accelerated markedly with Spain’s accession to the European Economic Community (EEC) in 1986. The main objective of the agricultural policy then was, not to ensure food security or support small-scale farming; its aim is to strengthen the competitiveness of Spanish agriculture on European Union (EU) and the world markets. It also partly rested on the resorting to cheap, Spanish or foreign day laborers. While this modernization process took place in all Western European countries, it happened quickly and intensely in Spain particularly.

This policy resulted in an increase in agricultural production, higher competitiveness, and development of exports of goods. It also led to a steep decline of the farming population, land concentration, and loss of farmland. Thus, while there were 2.8 million farms in 1962, there were only 0.9 million left in 2009.