Market Analysis for the World Congress on Preventive Oncology

Cancer is a widespread disease leading to millions of deaths each year. Thus, creating a in suppressible need of market analysis of cancer around the world. The worldwide rise in geriatric population and increasing incidence of cancer even in young adults is alarmingly strikes the need of a thorough study of patterns associated with cancer incidence. With increasing cancer patients and recent advancements in the research of cancer cure, there is a booming rise in the market for cancer research.

Cancer is a group of diseases that is caused due to abnormal cell growth and their potential to invade or spread to other parts of the body. Oncology is a branch of medicine that deals with the prevention, diagnosis and treatment of cancer. Benign tumors do not spread to other parts of the body. There are more than 100 types of cancer including breast cancer, skin cancer, lung cancer, colon cancer, prostate cancer, and lymphoma. Symptoms vary depending on the types of cancer. Cancer treatment may include chemotherapy, radiation, and/or surgery.

Preventive Oncology is defined as active measures to decrease the risk of cancer. The vast majority of cancer cases are due to environmental risk factors, and many, but not all, of these environmental factors are controllable lifestyle choices. Greater than 30% of cancer deaths could be prevented by avoiding risk factors including: tobacco, overweight / obesity, an insufficient diet, physical inactivity, alcohol, sexually transmitted infections, and air pollution. Not all environmental causes are controllable, such as naturally occurring background radiation, and other cases of cancer are caused through hereditary genetic disorders, and thus it is not possible to prevent all cases of cancer

With rising awareness and inclined dependency on chemotherapy for cancer cure, the pharmaceutical corporations have a noted to have boomed with a skyrocketing rise.

20% of death in the Europe is due to Cancer and it is home for the one quarter of cancer patients worldwide with an increase of 3.7 million new patients every year. While U.S stands second after Europe in death due to cancer.

Although, ways to prevent cancer is still not discovered, with the available technology, complete cancer cure is much nearer than ever before. It is hoped that by 2026, there will be more cancer survivors in the battle against cancer and it is predicted more than 20.3 million people suffering from cancer shall by recovered. 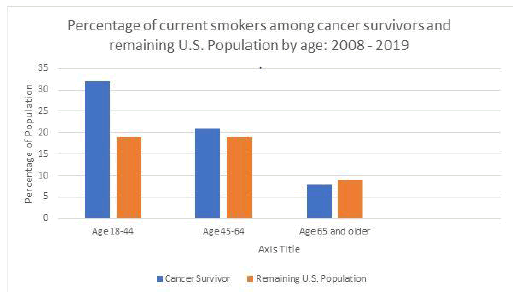 The view on Cancer and cancer care research is now experiences a positive change all around the world. A multiple option like gene therapy, hormonal therapy, immunotherapy, radiation therapy is now available apart from the cultural chemotherapy. Surgeries for cancer is well received and, in most countries, more than one option is provided to give a combined effect to give a better fight against cancer.

The recent developments in the field of therapeutics has proved to be curing Cancer and other oncological death causes. Market study explains that, within the time of 2015-2020, the Compound Annual Growth Rate (CAGR) of the Therapeutics will see an increase up to 4.2% and the treatment therapeutics increase up to rate of US Dollars Nine hundred and Eighty-Nine Million.

Therapeutics, has itself grown into various branches upon technological advancements and varies around the world. Chemotherapy, however, is widely used everywhere, accounting upon its cost effectiveness and efficient results, followed by Targeted therapy, immunotherapy, and hormonal therapy in the order. 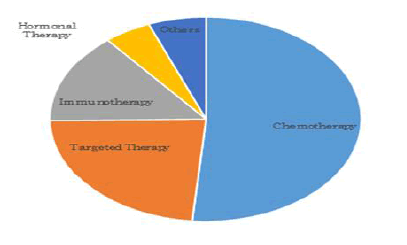 In the last decade, more than 70 new oncology cure or treatments have been developed, associated with biomarkers, gene regulations and are used to treat more than 20 different tumours.

Treating menopausal symptoms with estrogen and progestin together is known as estrogen-progestin therapy or combined hormone therapy. Hormonal replacement therapy (HRT) has a higher risk of being diagnosed with breast cancer. Before the link between HRT use and breast cancer risk was established, many postmenopausal women took HRT for many years to ease menopausal symptoms (hot flashes, fatigue) and to reduce bone loss. Since 2002, when research linked HRT and risk, the number of women taking HRT has dropped dramatically. Still, many women continue to use HRT to handle bothersome menopausal symptoms.

Stem-cell therapy is the use of stem cells to treat or prevent a disease or condition. In a typical stem cell transplant for cancer very high doses of chemo are used, sometimes along with radiation therapy, to try to kill all the cancer cells. This treatment also kills the stem cells in the bone marrow. Soon after treatment, stem cells are given to replace those that were destroyed. These stem cells are given into a vein, much like a blood transfusion. Over time they settle in the bone marrow and begin to grow and make healthy blood cells. This process is called engraftment.

In 2020, the Annual global growth rate of drug market of oncology is expected to be risen from 7.5% - 10.5%, reaching a margin of $150 billion. Over the years, the cancer drugs have also shown an increased rate, leading to the rise in the oncology drug market.

A strategic market analysis is of utmost important as it explains the case of incidence, the treatment methods available globally and cost of therapeutic systems. Of all the cancers related to women, breast cancer is revealed to be the second most cause of death and incidence, as revealed in the graph.

Researchers are growing new treatments that objective specific sorts of tumor cells and limit their development. All alone or in blend with other option medications, these treatments can diminish the extent of tumors and manifestations. Some imaginative treatments give seek after individuals with malignancies that have been impervious to more medicines.