The presence of dyslipidemia, atherogenesis and thrombophilia in diabetic patients is well known. However, the presentation of these features in streptozotocin (STZ)-induced diabetic rats is a controversial issue; particularly the effect of STZ on blood coagulation tendency is not clearly known. This study reports the effect of STZ (45 mg/kg, ip) on blood glucose, renal function, lipids profile, serum electrolytes, albumin and blood clotting tendency in rats. Adult male Sprague Dawley rats were divided into two groups of five animals each. The random blood glucose (32.32 ± 1.64 versus 6.80 ± 0.19 mmol/l) was significantly higher in the diabetic rats as compared to control animals. There was no significant difference in prothrombin time (PT) of control (15.02 ± 0.07 s) and diabetic (15.34 ± 0.34 s) rats whereas activated partial thromboplastin time (aPTT) was significantly lower in diabetic rats (16.62 ± 0.94 s) than control animals (20.40 ± 0.40 s). Administration of STZ significantly increased serum urea and creatinine levels indicating impaired renal function in diabetic rats. There was no significant difference in serum lipids, albumin and electrolytes between the two groups except that a significant decrease in serum sodium was observed in diabetic rats. In conclusion, the findings of this study show that even a short-term (1 week) hyperglycemia induced by STZ significantly impairs the renal function and blood clotting tendency in rats. This animal model may have potential relevance for anticoagulation therapy testing.

Administration of streptozotocin (STZ) causes pancreatic beta cell destruction that leads to the development of hyperglycemia, dyslipidemia and renal dysfunction in rats [9]. The STZ animal model develops characteristic symptoms of diabetes such as hyperglycemia, hyperlipidemia and increased water and food intake without bodyweight gain. In addition, STZ diabetes also induces key symptoms including increased glycogen storage in the myocardium, depressed ventricular performance and cardiac hypertrophy [10]. Renal hypertrophy can be detected as early as one day after the onset of diabetes and seen regularly post 60-day of STZ injection [11]. It has been reported that diabetes-induced renal hypertrophy produces increased dimensions of renal cells along with increased kidney weight [12]. STZ diabetes also causes significant decrease in glycogen in liver and skeletal muscle as well as significant increase in glucose-6-phosphatase in hepatic tissue of rats [13]. This study reports the effect of STZ on serum biochemical parameters related to renal function, lipid profile, electrolytes and blood coagulation tendency.

Male Sprague-Dawley rats, weighing (250–300 g) were housed in a temperature-controlled room (24°C) with a 12-h light/dark cycle. Standard laboratory food and water were available ad libitum throughout the study. The rats were randomly divided into two groups of five animals each. One group of rats was rendered diabetic with a single i.p. injection of STZ (45 mg/kg) dissolved in normal saline, whereas the other group served as control and received saline only. After 7 days, blood glucose level was determined in fasted (15 h) and fed rats on consecutive days. For blood glucose analysis, the blood was taken via a tail nick, and the glucose concentration was determined with a Glucometer (Accutrend, Germany). The rats were then sacrificed and the blood was collected from heart for biochemical analysis. Serum cholesterol, lipoproteins, triglycerides, urea, creatinine, albumin and electrolytes were analyzed using an Autoanalyzer (Roche, Germany). The blood coagulation markers, PT and aPTT were measured by DiaPlastin and DiaClin kits (DiaMed GmbH, Switzerland).

The data were analyzed by both parametric (independent samples t-test) and nonparametric (Mann-Whitney U-test) tests using the SPSS version 10 software package. The P values < 0.05 were considered as statistically significant. 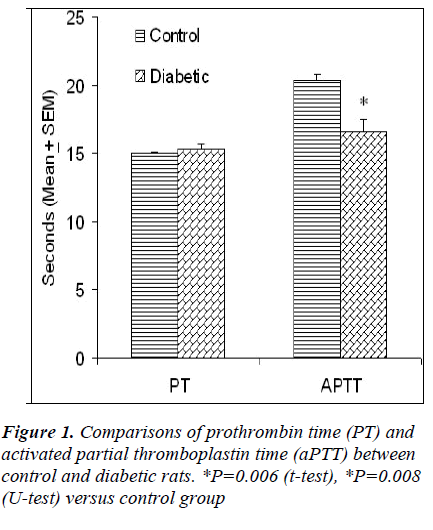 A single i.p. injection of STZ (45 mg/kg) in fasted rats produced hyperglycemia all the rats without causing any mortality (Table 1). Although the PT levels were unaffected by STZ treatment, a significant decrease in aPTT levels was observed in diabetic rats as compared to normal controls (Fig. 1). PT and aPTT respectively measures the extrinsic and intrinsic pathways of coagulation and are used to determine the bleeding or clotting tendency of blood. Significant increases in the markers of endothelial function including plasma soluble thrombomodulin (sTM), von Willebrand factor (vWF) and fibrinogen have been noticed in STZ-induced diabetes in rats [14]. Endothelial dysfunction and elevation of endothelial cell markers such as sTM may play a role in the initial stage of atherosclerosis [15]. In STZ diabetes, increase in plasma fibrinogen and decrease in aXIII factor have also been reported [16]. Thus, a shorter aPTT in STZ-treated rats suggest the possible use of this model for testing the effect of anticoagulant therapy.

In conclusion, a single injection of STZ induces a permanent hyperglycemia in rats. These rats also show significant impairment in the renal function and blood clotting tendency. However, the levels of serum lipids, albumin and electrolytes (except sodium) were similar between the control and diabetic groups. The findings of this study point towards the possible utilization of this animal model for anticoagulation therapy testing however further studies are needed for its standardization and verification.

The author extends his appreciation to the Deanship of Scientific Research at King Saud University for funding the work through the research group project No. RGPVPP- 052.