Aims: The present study is to investigate the synergistic effect of lapatinib and luteolin in the inhibition of the growth and proliferation of breast cancer cells, as well as the underlying mechanisms.

Methods: Human breast cancer cell line BT474 was cultured in vitro. The cells were incubated with different concentrations of luteolin and/or lapatinib. MTS assay was used to test the proliferation of the cells. Flow cytometry was used to identify cell cycle. Quantitative real-time polymerase chain reaction was used to measure the expression of ERBB1 and ERBB2 mRNA. Western blotting was employed to determine the protein expression of ERBB1 and ERBB2. The phosphorylation of AKT, ERK1/2 and H2A.X, and the expression of Caspase 8 and PARP were also determined using Western blotting.

Conclusion: The present study demonstrates that synergistic use of luteolin with lapatinib inhibits the growth of breast cancer cells, possibly by inducing apoptosis via the deactivation of AKT and ERK signaling pathways.

Breast cancer is the most common malignant tumor in women, and its incidence all over the world is increasing year by year [1,2]. In China, the morbidity and mortality rates of breast cancer are also increasing [3]. Radical surgery is the most important method for the treatment of breast cancer. For patients with advanced tumors, molecular target therapy that is based on the key molecules in tumor cell growth and proliferation signaling pathway has become an important treatment method in addition to conventional therapies such as surgery, chemotherapy and radiotherapy [4,5]. Targeted therapeutic agents that have been applied to clinical practice include Epidermal Growth Factor Receptor (EGFR) inhibitors, monoclonal antibodies, and anti-tumor angiogenesis drugs [6-8].

Luteolin is a common type of natural flavonoid that is abundant in the leaves of celery, green pepper and dandelion. It possesses various biological activities such as anti-oxidation, anti-inflammation, anti-depression, anti-convulsion, antianxiety, and anti-anaphylaxis, and enhances immunity [11,12]. Luteolin has inhibitory effects on several types of malignant tumors. For example, luteolin inhibits the proliferation of lung adenocarcinoma A549 cells via PI3K-Akt-IkBα-Snail signaling pathway by down-regulating the expression of E-cadherin [13]. Luteolin suppresses the growth of colorectal cancer by regulating Wnt/β-catenin/GSK-3β signaling pathway and activating Nrf2 signaling pathway [14], and enhances the effect of tamoxifen on breast cancer by inhibiting the expression of cyclin E2 [15]. These studies suggest that luteolin can be a potential antitumor drug. However, the existence of synergistic effect of the combined use of lapatinib and luteolin has never been evaluated before. In the present study, we investigate whether the combined use of lapatinib and luteolin has synergistic effect on human breast cancer cells, as well as the underlying mechanism.

Human breast cancer cell line BT474 (American Type Culture Collection, Manassas, VA, USA) was cultured in RPMI-1640 medium containing 2 mmol/L glutamine, 10% fetal bovine serum, 100 μg/ml streptomycin and 100 U/ml penicillin G at 37°C and 5% CO2. When reaching confluency, the cells were trypsinized and centrifuged at 1,000 rpm for 5 min. Then, the cells were seeded into 6-well or 24-well plates according to different experimental purposes. The cell density was adjusted to 105/ml. During the whole culture procedure, mycoplasma examination was performed to exclude contamination.

BT474 cells were prepared into single cell suspension in RPMI-1640 medium containing 10% fetal bovine serum. About 1,000 cells (100 μl) were inoculated into each well of 96-well plates, and cultured for 72 h. After incubation, MTS solution (20 μl) was added into each well for incubation for 2-4 h. Then, absorbance of each well was measured at 490 nm. Cell growth curves were plotted using absorbance as Y axis and time as X axis. The inhibition rates of each group of cells and IC50 values of different concentrations of drugs were calculated. Using isobologram analysis, Combination Index (CI) of drugs was calculated [16]. If CI>1, the two drugs had antagonistic effect; if CI=1, the two drugs had additive effect; if CI<1, the two drugs had synergistic effect.

A total of 1 × 105 cells were collected and centrifuged at 1,000 rpm for 5 min. After discarding supernatant, the cells were washed with Phosphate-Buffered Saline (PBS) before addition of ice cold 70% ethanol for fixation. After incubation at 4°C overnight, the cells were centrifuged at 1,000 rpm for 5 min and washed with PBS once. Then, the cells were stained using 1 ml propidium iodide and incubated at 4°C in dark for 30 min before flow cytometry (FACSCalibur; BD Biosciences, Franklin Lakes, NJ, USA). The data were analyzed using Modifit LT software (BD Biosciences, Franklin Lakes, NJ, USA).

Lapatinib, luteolin or the combination of both inhibits the proliferation of BT474 cells in a dose-dependent manner

To test the effect of lapatinib, luteolin or the combination of both drugs on the proliferation of BT474 cells, MTS assay was carried out. The data showed that the relative absorbance at 490 nm was decreased as the doses of individual or combined drugs were increasing. The decrease had a dose-dependent manner. When the dose of luteolin was 15 μmol/L and the dose of lapatinib was 250 nmol/L, the inhibition rate of BT474 cell growth was 52%, with a CI of 0.84 (Figure 1). Therefore, 15 μmol/L and 250 nmol/L were chosen as study doses for luteolin and lapatinib, respectively, in the following tests. These results suggest that lapatinib, luteolin or the combination of both inhibits the proliferation of BT474 cells in a dosedependent manner. 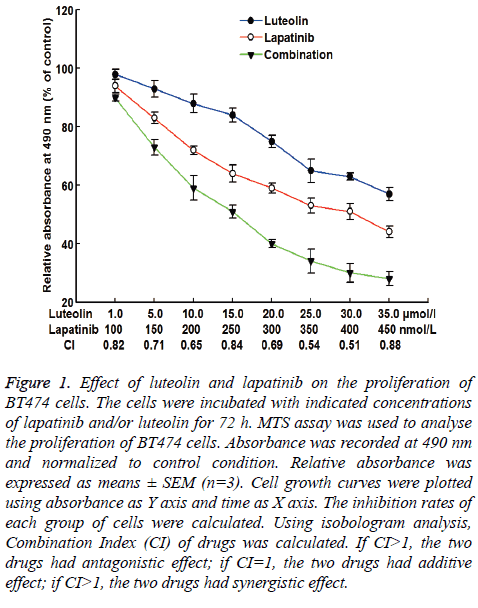 Figure 1: Effect of luteolin and lapatinib on the proliferation of BT474 cells. The cells were incubated with indicated concentrations of lapatinib and/or luteolin for 72 h. MTS assay was used to analyse the proliferation of BT474 cells. Absorbance was recorded at 490 nm and normalized to control condition. Relative absorbance was expressed as means ± SEM (n=3). Cell growth curves were plotted using absorbance as Y axis and time as X axis. The inhibition rates of each group of cells were calculated. Using isobologram analysis, Combination Index (CI) of drugs was calculated. If CI>1, the two drugs had antagonistic effect; if CI=1, the two drugs had additive effect; if CI>1, the two drugs had synergistic effect.

Luteolin and lapatinib synergistically induce the apoptosis of BT474 cells

To investigate the effects of lapatinib and luteolin on the cell cycle and apoptosis of BT474 cells, flow cytometry and Western blotting were performed. Flow cytometry showed that incubation with 5 or 15 nmol/L luteolin alone increased the percentages of cells in sub-G1 phase, and combined use of 5 or 15 nmol/L luteolin with 250 nmol/L lapatinib significantly increased the percentages of cells in sub-G1 phase to 17.6% and 26.4%, respectively (P<0.05) (Figure 2A). Western blotting showed that incubation with 15 μmol/L luteolin alone failed to significantly alter the phosphorylation of γ-H2A.X, or the contents of caspase 8 or PARP. Similarly, incubation with 250 μmol/L lapatinib alone only slightly affected the phosphorylation of γ-H2A.X, as well as the contents of caspase 8 and PARP. Of note, combined use of 15 μmol/L luteolin and 250 μmol/L lapatinib significantly enhanced the phosphorylation level of γ-H2A.X, and the contents of cleaved Caspase 8 (active format of caspase 8) and cleaved PARP (death substrate) (P<0.05) (Figure 2B). These results indicate that luteolin and lapatinib synergistically induce the apoptosis of BT474 cells. 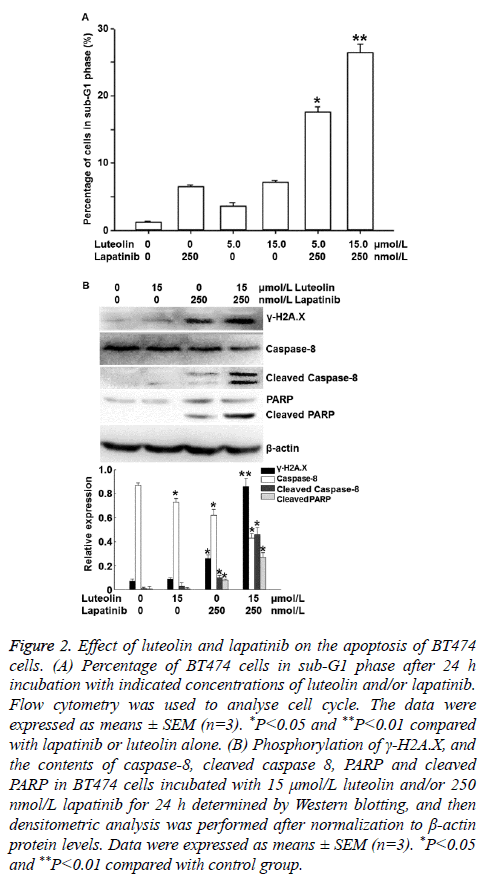 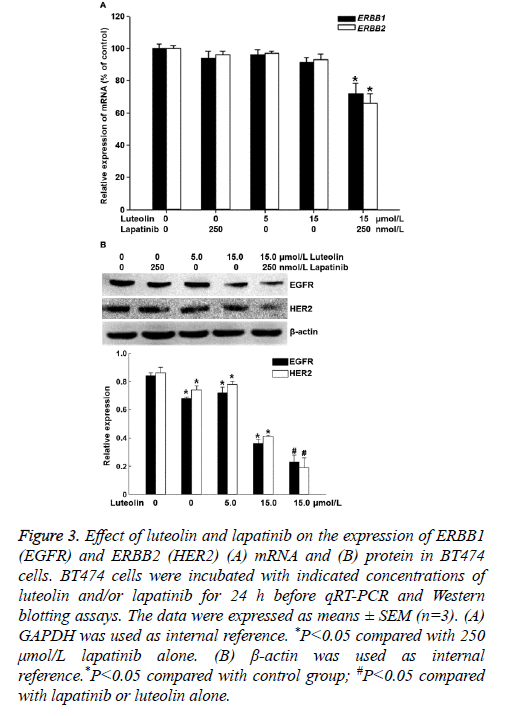 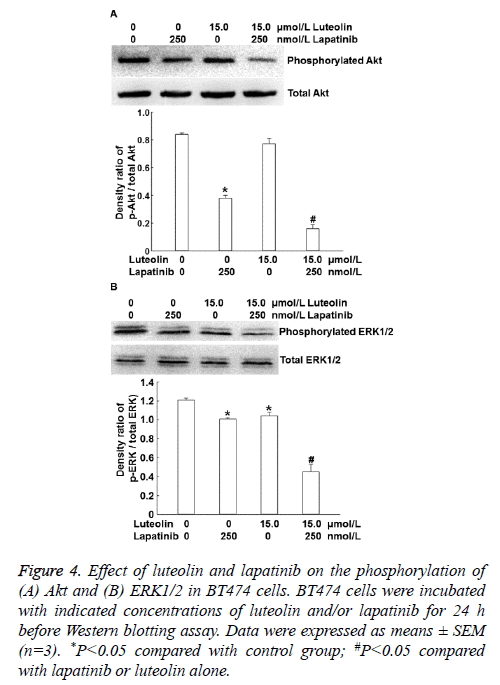 Due to the continuous development of new drugs, the survival rate of breast cancer patients has been greatly improved. However, these therapeutic agents often target at single sites. Signal pathways in the body are complexed, so the effect of single administration of targeted drugs is usually limited [18,19]. Combined use of drugs that target multiple pathways in the process of tumor cell growth and invasion may have more effective and lasting inhibitory effects on tumor cells [20]. As a tyrosine kinase inhibitor, lapatinib inhibits the activity of intracellular EGFR and Her2 by inhibiting their ATP sites [21]. It is reported that cetuximab enhances the sensitivity of colon cancer patients with irinotecan resistance [22]. In addition, cetuximab and mapatumumab improve the clinical prognosis of wild-type KRAS patients when used in conjugation with oxaliplatin and irinotecan, respectively [23]. These studies suggest that EGFR may be a key reason for the resistance of various patients to a variety of drugs [24,25]. Our results in the present study show that luteolin and lapatinib synergistically inhibit the growth of breast cancer cells. In addition, treatment with luteolin or lapatinib alone fails to induce apoptosis, whereas combined use of both drugs arrests cell cycle and induces apoptosis. Apoptosis is demonstrated by the phosphorylation of γ-H2AX and the activation of Caspase family proteins [26]. Phosphorylation of γ-H2AX is the symbol of early apoptosis, while Caspase family proteins abolish the enzymatic activity of DNA repair enzyme PARP [27]. There are two anti-apoptotic signaling pathways in cells, including EGFR-MAPK signaling pathway and PI3K-AKT signaling pathway [28,29]. In healthy cells, the activities of the two signaling pathways are low, and they only maintain normal growth and proliferation of cells. Our results show that the synergistic inhibitory effect of luteolin on breast cancer cell growth is related with the phosphorylation of PI3K and ERK. Treatment with luteolin reduces cell activities and increases their sensitivity to lapatinib. EGFR, Raf and AKT are substrates for HSP90, and binding with EGFR, Raf or AKT maintains the stable status of HSP90 [30]. Some histone deacetylase inhibitors can induce the deacetylation of HSP90, and the dissociation of HSP90 with its substrates releases EGFR, Raf or AKT, which can be degraded via proteasome pathway, inhibiting the activation of anti-apoptotic signaling pathway and promoting the apoptosis of lung cancer cells [31]. In ovarian cancer cells that are resistant to cisplatin, luteolin further enhances their sensitivity to chemotherapeutic drugs [32]. However, whether luteolin synergistically enhances the anti-tumor effect of lapatinib via HSP90 still needs further studies.

Complexed interactions with EGFR and other members of ERBB receptor family may affect the sensitivity of EGFRtargeted drugs on tumor cells. Therefore, we have investigated the effect of the combination of luteolin and lapatinib on the expression of EGFR and Her2 mRNA. The result shows that combined use of luteolin and lapatinib reduces the expression of EGFR and Her2 mRNA and proteins. It is reported that inhibition of HSP90 and treatment with lapatinib synergistically suppress the growth of colon cancer cells [17]. This suggests that unfolded protein response may play important roles in EGFR/Her2 signaling pathway, and EGFR and Her2 may both be the substrates of HSP90 [31]. In addition, luteolin is shown to bind with HSP90, and induces tumor cell apoptosis by inhibiting the sustained activation of STAT3 [33]. In conclusion, the present study demonstrates that combined use of lapatinib and luteolin inhibits the growth of BT474 cells, and the two drugs have synergistic effects. Treatment with lapatinib and luteolin down-regulates the expression of EGFR and Her2 in BT474 cells, inhibits the activation of PI3K and ERK signaling pathways, and promotes apoptosis. However, the mechanism of the synergistic effect of lapatinib and luteolin is complexed and still needs further studies in the future.

This work was supported by the Medical Scientific Research Project of Health and Family Planning Commission of Chongqing City (No. 20142203).