Pressure Ulcers (PUs) and leg ulcers are common in clinical practice. They constitute serious problems, severely impair patient quality of life, and account for a high percentage of annual healthcare costs [1,2]. Acute leg ulcers tend to occur after serious injury (trauma) or surgery. Chronic leg ulcers may be divided into venous leg ulcers, Diabetic Foot Ulcers (DFUs), PUs, and arterial ulcers [3]. PUs in the sacrococcygeal region may be due to limited mobility from brain or spinal cord injuries or fractures [4].

The relationship between Norepinephrine (NE) and skin wound healing is still controversial. NE recruits innate immune cells and expedites wound closure in mice [5]. NE has been shown to promote neurotisation in connective tissue regenerates of skin wounds in white rats [6]. Grabovoi suggested that NE decreases the inflammatory reaction, the fibroblast content of the regenerate, and the degree of cytoplasmic basophilia in white rats [7]. Furthermore, NE has been shown to inhibit the growth of fibroblasts taken from neonatal mice in an in vitro assay [8].

Thirty-six male Sprague Dawley rats weighing 250-300 g were purchased from the animal centre of Southern Medical University, Guangzhou, China. Rats were acclimatised for 1 week prior to the surgical protocols. The animals were maintained at 23 ± 1°C with a 12 h light/dark cycle and free access to standard laboratory food and water. The ambient temperature in all animal experiments was kept at 25°C. The experiments were conducted according to institutional guidelines and were approved by the Animal Care Committee of Guangzhou General Hospital of Guangzhou Command.

Thirty-six Sprague Dawley rats were randomly assigned to three groups: the sympathectomised group, the sham-operated group, and the blank control group. The sympathectomised group underwent lumbar sympathetic trunk (L2-4) resection with a surgical microscope (Leica M300, Germany). First, the posterior peritoneal attachments were freed, and the intestine, spleen, liver, and stomach were retracted to the right. A blunt dissection was then carried out to peel the peritoneal covering off of the posterior abdominal wall and to explore the gutter between the quadratus lumborum muscles overlying the vertebral column as previously described [19]. The lumbar sympathetic trunks L2-4 were pale and located anterior to the spine, medial to the genitofemoral nerves (Figure S1). The sham-operated group received an operation, but the lumbar sympathetic trunks were not removed. The blank control group underwent anaesthesia but no surgery. Intraoperative temperature changes in the hind plantar skin were recorded using a NeXus-10 MKII thermometer (Stens Biofeedback- Stens Corporation, San Rafael, CA, USA) in the sympathectomised group. The skin temperature of the left foot increased intraoperatively by 0.8°C, 30 min after lumbar sympathectomy (Figures S2 and S3).

In vivo wounding procedure and monitoring

Two weeks after modelling, the rats were anesthetized using 0.6% pentobarbital sodium (40 mg/kg) and two round, fullthickness dermal wounds (1.5 cm diameter, at a distance of 1.0 cm) were made on both sides of the sacrococcygeal skin in each rat using skin punches. The skin specimens in the sacrococcygeal region were sent for immunoenzyme staining and western blotting. After the wounding procedure, the animals were kept in separate cages. The wounds were photographed using a digital camera on d 3, 5, 7, 10, 14, and 21 post-wounding. The wound sizes were measured with Image-Pro Plus v 6.0 software and calculated against the original area (on d 0), which was designated as 100%. The wounds, including 0.5 mm wound edge tissues, were cut under anaesthesia for analyses in 4 rats (8 wounds) from each group on d 3, 7, and 21 post-wounding.

The harvested wounds were fixed in 10% neutral formalin, dehydrated in a graded series of ethanol, and then embedded in paraffin for routine haematoxylin and eosin (H and E) staining. As part of the histological evaluation, all slides were examined by a pathologist without knowledge of the previous treatment. Histological scoring of epidermal and dermal regeneration in this study was performed according to a previously described method [20].

The wound specimens (scars) were fixed with formalin and embedded in paraffin according to routine laboratory techniques. Serial 5 μm thick sections were obtained and stained with Masson’s Trichrome to detect collagen fibres. Deparaffinised sections were incubated with haematoxylin for 10 min, 0.5% hydrochloric acid alcohol for 3 s, and 0.6% ammonia for 30 s. After being washed with tap water for 1 min, sections were stained with Ponceau liquid for 1 hour and then washed for 1 min with tap water. After 5 min in phosphomolybdic acid solution, sections were stained for 5 min in water-soluble aniline blue and then incubated for 1 min with 1% acetic acid. After routine alcohol and xylene-based dehydration, the sections were fixed in 10% neutral buffered formalin for light microscopy. A pathologist who was blinded to the research design checked all the sections and described the pathological changes. In addition, Image-Pro Plus 6.0 was used to scan and sum the integrated optical density of the stained collagen as previously described [21].

The pathological deparaffinised sections of sacrococcygeal skin were washed three times in Phosphate Buffer Solution (PBS) for 5 min, and then blocked with 5% serum for 30 min. The slides were subsequently incubated at 4°C overnight with primary antibodies against NE (1:1000 dilution; Lifespan, Cambridge, UK) and dopamine β-hydroxylase (DβH; 1:800 dilution; Abcam, Cambridge, UK). After rinsing three times with PBS, the slides were incubated with secondary antibodies at 37°C for 30 min. The secondary antibodies were horseradish peroxidase-labelled antibodies, further developed with 3, 3’- diaminobenzidine tetrahydrochloride solution.

NE and DβH were located primarily in areas with arteriovenous anastomoses, arrector pilorum muscles, and arterioles; whereas, few adrenergic fibres were found around sweat glands (Figures 1 and 2). The expressions of NE (P<0.001) and DβH (P<0.001) were reduced 2 w after sympathectomy (Figure 3). 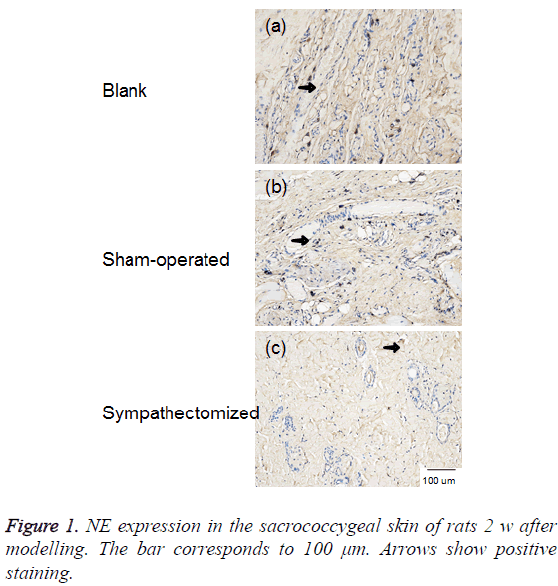 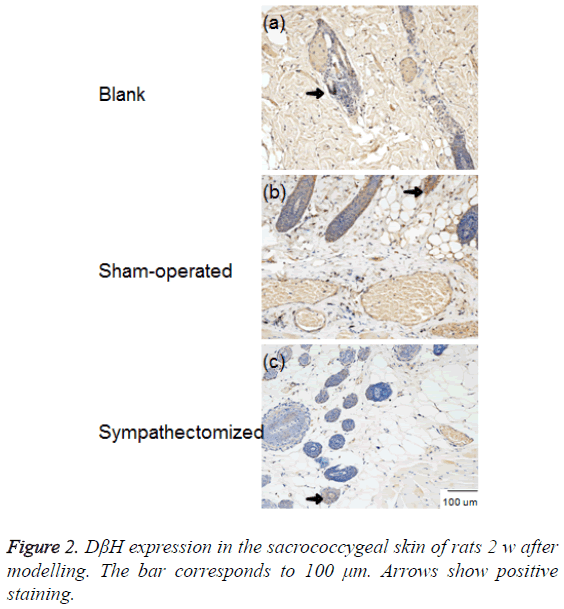 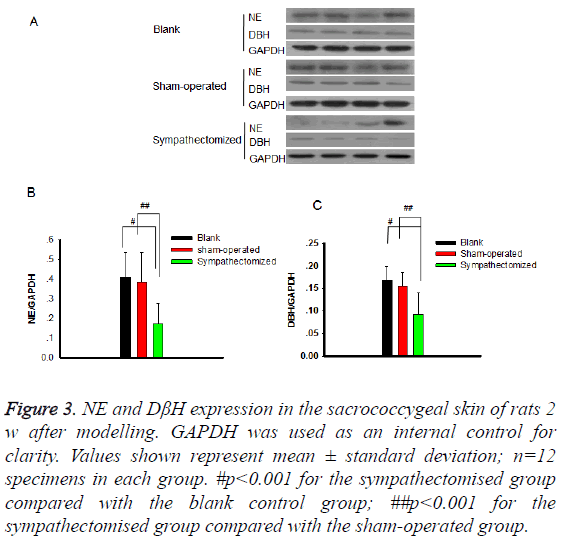 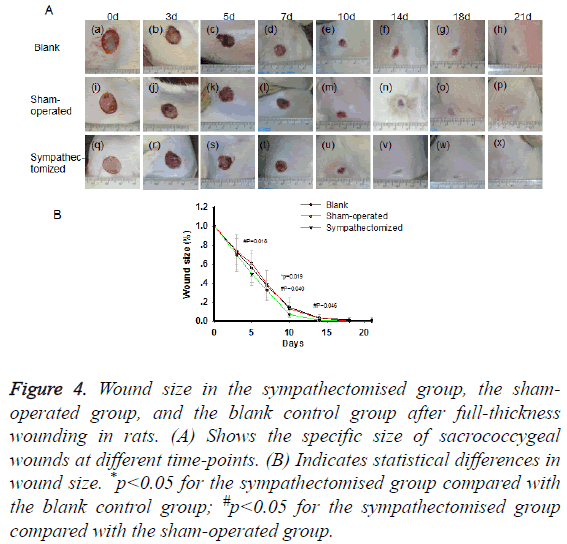 There were many inflammatory cells in the wounds during the early stages of healing. The number of collagen fibres increased throughout the period of wound healing. The wound surfaces were gradually covered by epidermal cells. There were no statistical differences among the groups in reepithelialisation scores (Figures 5A and 5B). 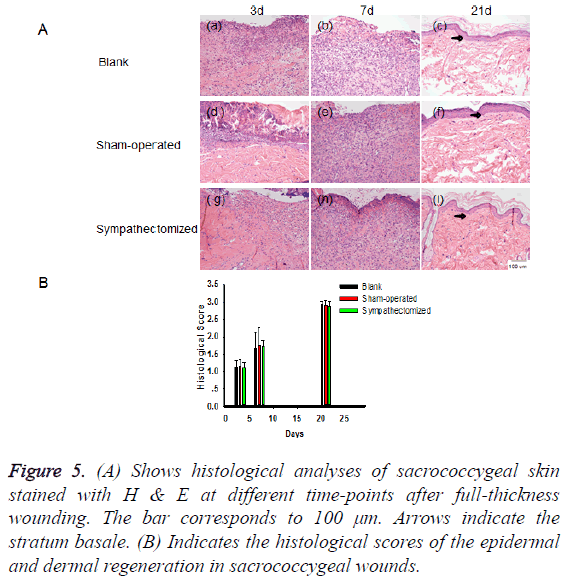 Figure 5: (A) Shows histological analyses of sacrococcygeal skin stained with H & E at different time-points after full-thickness wounding. The bar corresponds to 100 μm. Arrows indicate the stratum basale. (B) Indicates the histological scores of the epidermal and dermal regeneration in sacrococcygeal wounds. 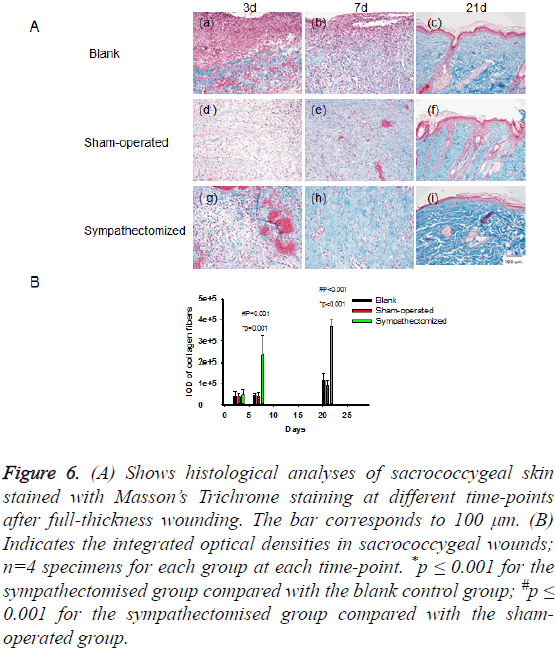 In this experiment, all the rats survived after lumbar sympathectomy. The accuracy of lumbar sympathectomy was confirmed by intraoperative monitoring of skin temperatures (Figures S2 and S3). To avoid the potentially confounding effect of an operation-related stress response, the wounds in the sacrococcygeal skin were made 2 w after modelling.

NE and DβH are common sympathetic markers. DβH is one of the key enzymes in the synthesis of NE [22]. A major portion of the hind leg [23,24] and the femoral arteries [25] are innervated by L2 through L4 of the sympathetic chain. If the L2–4 sympathetic trunks are removed bilaterally, sympathetic nerve functions decline in the lower limbs [26]. Previous studies showed that tyrosine hydroxylase immunoreactive fibres were reduced in the rat superficial pineal gland on d 7, 14, 21, and 42 post-removal of the superior cervical ganglia [27,28]. Lindpaintner et al. [29] proved that bilateral stellate ganglionectomy led to profound decreases in cardiac NE and DβH 10 and 20 d after surgery in male guinea pigs. In our experiment, NE and DβH expression were reduced in the sacrococcygeal skin 2 w after lumbar sympathectomy in rats (Figures 1-3), indicating local sympathetic denervation.