Traditional cool-season turfgrass species, such as Kentucky bluegrass (Poa pratensis L.), perennial ryegrass (Lolium perenne L.), and tall fescue (Lolium arundinaceum [Schreb.] Darbysh.), provide high quality turfgrass for athletic and aesthetic uses. Unfortunately, this high level of quality often comes at a cost of high levels of inputs in the forms of irrigation and fertilization. Therefore, there is a growing need and demand to produce turfgrass with lower inputs, particularly irrigation. Herein, we describe a study of the turfgrass potential of crested wheatgrass (Agropyron cristatum [L.] Gaertn.), thickspike wheatgrass (Elymus lanceolatus [Scribn. & J.G. Sm.] Gould) and western wheatgrass (Pascopyrum smithii [Rydb.] Á. Löve) when managed under low irrigation. We found that these species generally exhibited lower percent ground cover than tall fescue and Kentucky bluegrass under reduced irrigation, but that they exhibited darker green color. We identified a large range of phenotypic values and generally high narrow sense heritability (h2>0.5) for turf quality within these species, particularly for thickspike and western wheatgrass. Selection for increased turfgrass quality in these wheatgrass species has a high likelihood of developing improved turfgrass cultivar in these species.

Landscape irrigation, including turfgrass, in arid regions of western North America utilizes an estimated 45 to 60% of municipal freshwater resources [1,2]. Turfgrass alone covers an estimated 1.9% of the surface of the continental United States and is identified it as the single largest irrigated crop in the United States [3]. The sustainability of this level of landscape irrigation is already questionable. In dry years, irrigation restrictions ensure adequate water supply by limiting use on landscapes [4]. However, the increasing pressure placed on freshwater supplies by a growing population, climate change effects, and demand for industrial and agricultural purposes indicates that freshwater use for landscape irrigation will continue to be limited [5,6].

Many current low-maintenance turf mixtures include older cultivars of these species. However, the included cultivars were bred for forage or re-vegetation purposes and are not intended for turf situations. To fully realize the potential of these species in turf situations, there needs to be concerted plant improvement for turf quality and production. The objective of this study was to determine the turf potential of half-sib families of crested, thickspike, and western wheatgrass under limited irrigation. We show the variation for color and quality among different sources of germplasm, and characterize the potential for genetic improvement of turf quality in these species.

In August 2011, we seeded half-sib families (HSFs) of crested, thickspike, and western wheatgrass; and commercial check cultivars of intermediate wheatgrass, Kentucky bluegrass, and tall fescue. The experimental design was a randomized complete block design with two complete blocks. The experimental location was the Utah State University Evans Research Farm near Millville, UT (41°41’52” N, 111°49’53” W). The Evans Farm receives a mean of 432 mm of annual precipitation, is 1378 m above sea level, and consists of a Nibley silty, clay loam soil. The plots were 0.56 m x 0.56 m and the seeding rate was 244 kg ha-1 for all species but Kentucky bluegrass, for which the seeding rate was 146 kg ha-1. We scattered the seed to each plot by hand and then raked the plots to ensure seed-to-soil contact. Following seeding, we used overhead irrigation over the course of three weeks to maintain a moist soil surface until seedlings emerged from the soil and established. Beginning in spring 2012, we applied overhead supplemental irrigation on a weekly basis to replace 50% of the modeled evapotranspiration after accounting for any natural precipitation during that time period. Irrigation continued through September during both 2012 and 2013. We did not apply any supplemental fertilizer during the study. During the growing season, we mowed each plot with a rotary mower to a height of 7.6 cm on weekly basis (Figure 1). 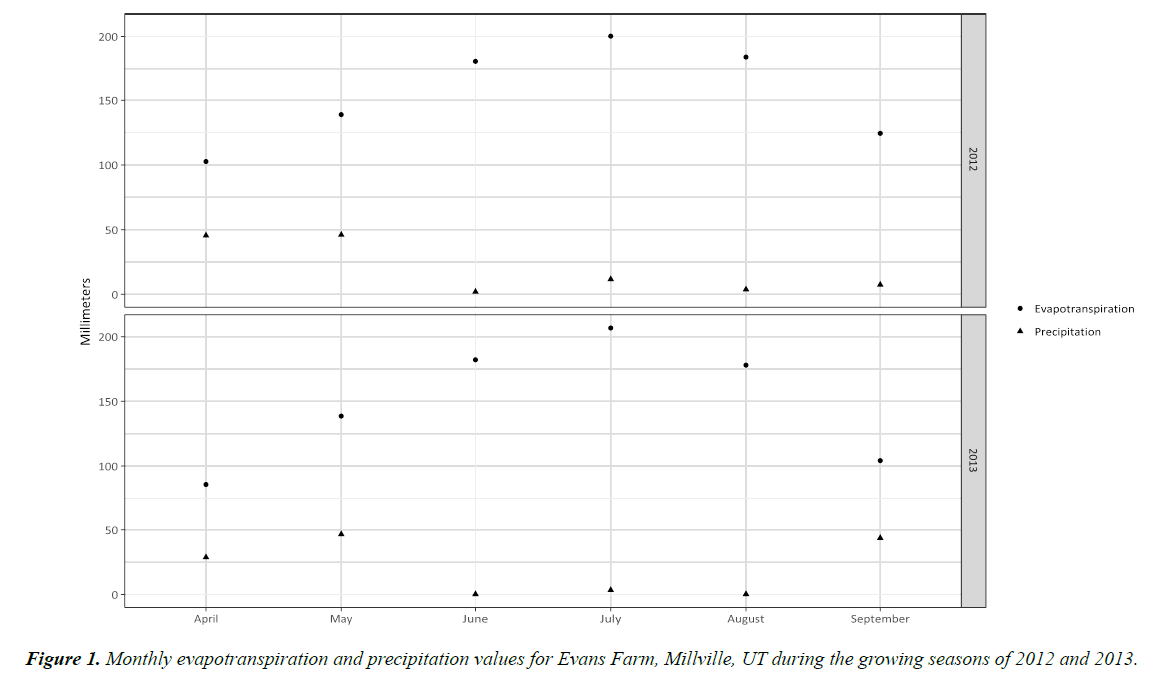 Figure 1. Monthly evapotranspiration and precipitation values for Evans Farm, Millville, UT during the growing seasons of 2012 and 2013.

We used digital imagery to measure the green color index (GCI) and the percent groundcover (PGC). We mounted an Olympus SP-500 UZ digital camera (Olympus Corporation of the Americas, Center Valley, PA) to a custom built chamber and then took pictures of each plot. The chamber excluded ambient light and was instead lighted internally with four 9 W IS-09 compact fluorescent light bulbs (UL, Camas, WA). We set the camera to a 1200 x 1600 pixel image size and the fluorescent white balance setting. We then fed the digital images to SigmaScan Pro v5 (Systat, San Jose, CA), which used the Turf Analysis macro [25] to convert the images to GCI [26] and PGC [27] values. The software used a color threshold of 30 to 100 and a saturation of 0 to 100 for the included pixels. The macro converted images to GCI by assigning numerical values based on the Munsell color system and to PGC by dividing the number of pixels meeting the threshold by the total number of pixels in the image.

We collected the first set of digital images in late October 2011. In subsequent years, depending on the weather and plant growth, we began collecting images in April (2013) or May (2012). We then continued taking images at approximately two week intervals through the remainder of the growing season (late September). We collected images on 19 separate dates during the study, including a final set of images at the end of the study in late October 2013. To facilitate analyses and interpretation, we grouped the collection dates into four time periods according to the collection date. The time periods, termed seasons, were spring (April and May), early summer (June and early July), late summer (late July and August), and fall (September and October). Each season consisted of five collection dates except for spring, which had only four collection dates.

We analyzed the data using the ASReml-R package [28] of R [29]. We modeled species, season, and their interaction as fixed effects; and HSFs, collection dates within season, complete blocks as random effects. We also modeled the repeated measures that corresponded to the multiple collection dates for each trait. The results are in the form of best linear unbiased estimates from the models. We also estimated Spearman correlations between the traits across seasons and between seasons for the same trait.

The main effects of season and species differed (P ≤ 0.002) from zero for PGC and GCI (Figures 2 and 3). The season-by-species interaction effect also differed (P < 0.001) from zero for both traits. Contribution to the total sums of squares for both traits were greatest by the species main effect, intermediate by the season-by-species interaction, and least by the season main effect. 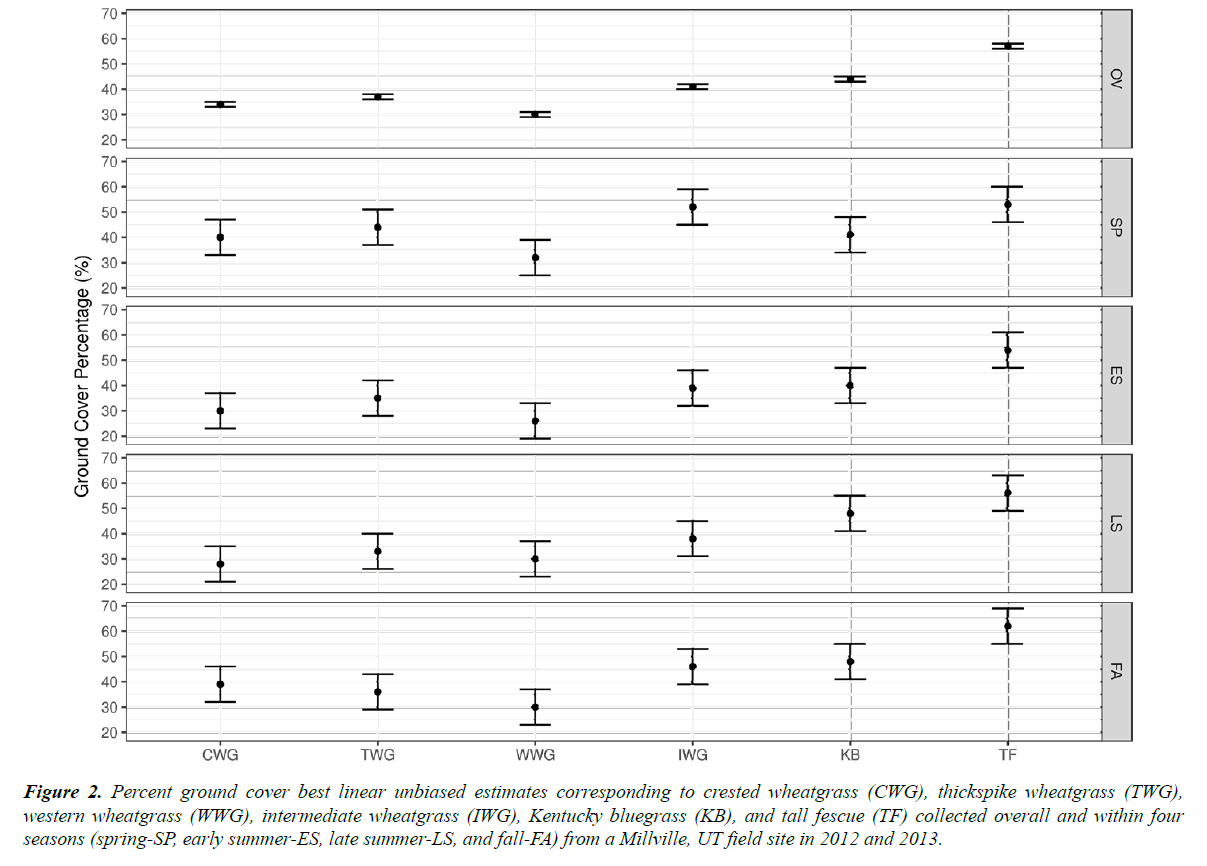 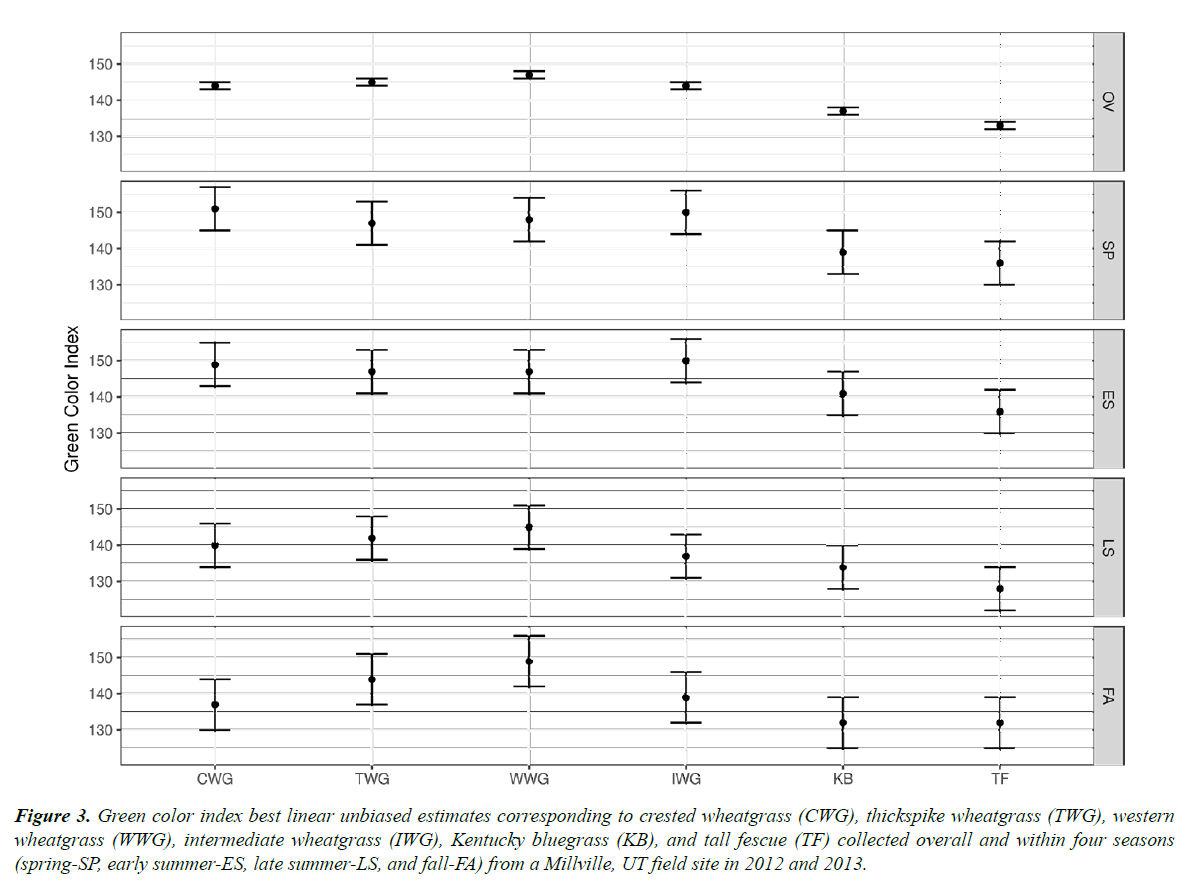 There were differences among the individual entries for PGC overall and within each season (Figure 4). 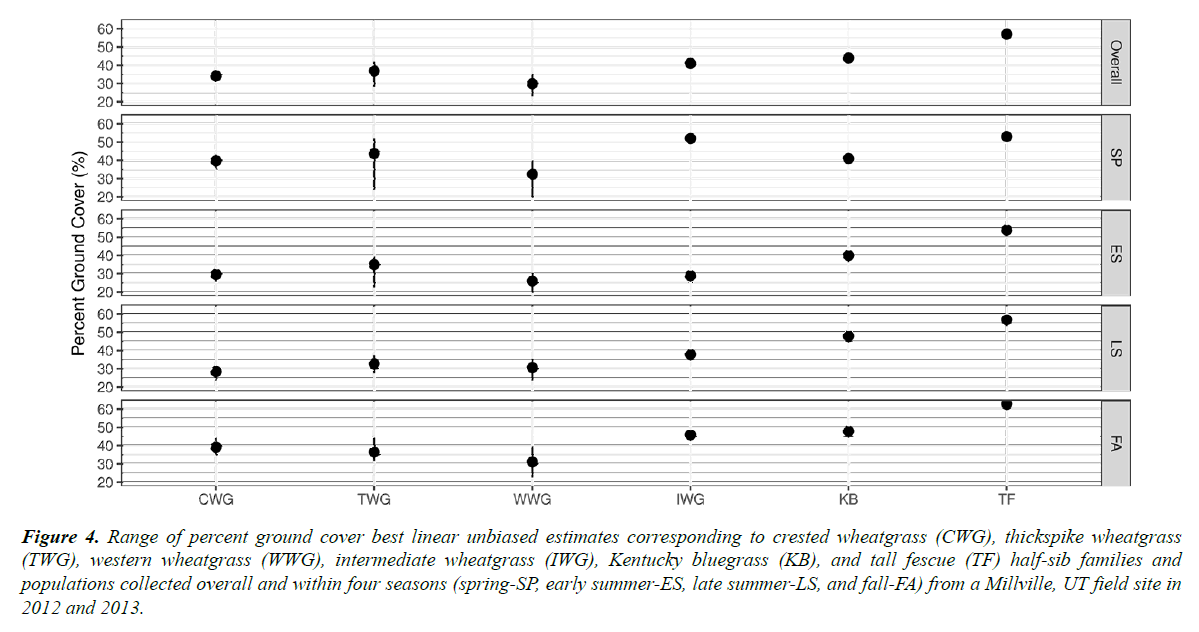 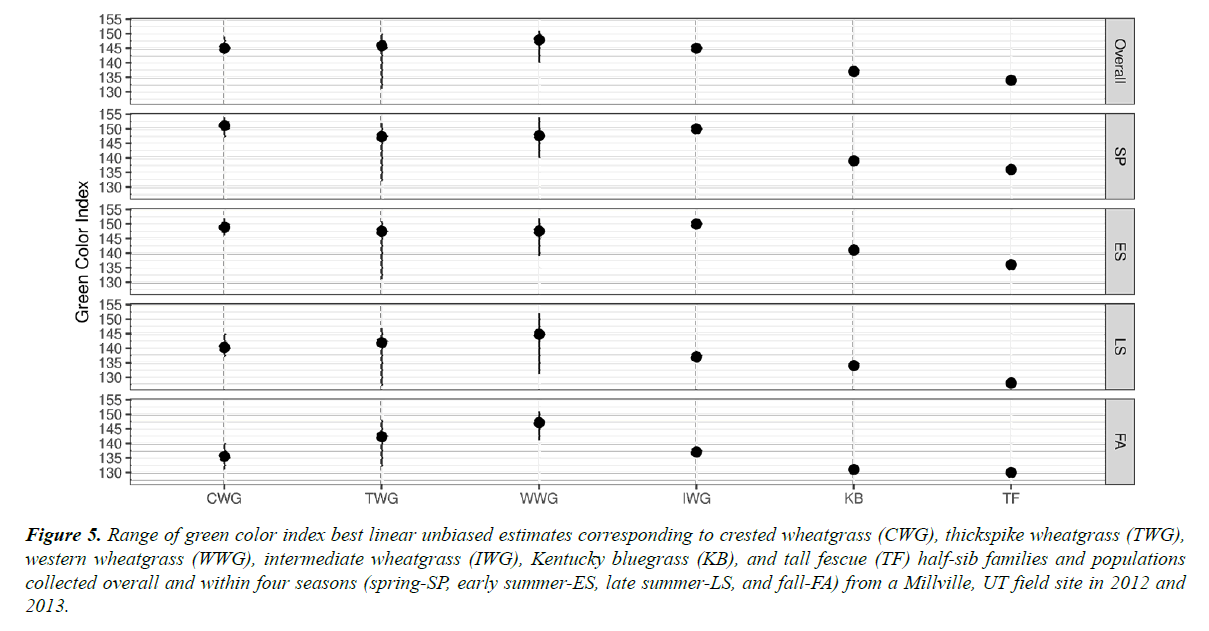 Across species correlations between PGC and GCI did not differ from zero, or were biologically meaningless, for all seasons but fall when the correlation was -0.74 (P<0.001).

Correlations among season for the same trait were generally moderate to high and positive. Spring and early summer PGC values were highly correlated to each other and to the overall values (ρ ≥ 0.87, P<0.001). Correlations between late summer, fall, and the remaining seasons for PGC all differed from zero (P<0.001), but were moderate in magnitude (ρ=0.40 to 0.67) with the exception of the late summer and fall correlation which did not differ from zero. The highest correlations between seasons for GCI occurred between the overall, late summer, and fall values (ρ=0.74 to 0.90). Other values were low to moderate for this trait.

Diesburg et al. [30] defined the necessary characteristics for a low-maintenance turf species as persistence and uniformity under abiotic and biotic stress conditions. Based on these criteria, tall fescue was clearly the species best adapted to the conditions of this study. Only during the spring did intermediate wheatgrass exhibit PGC comparable to that of tall fescue. The thickspike and crested wheatgrasses compared more favorably to Kentucky bluegrass. Despite its rhizomatous growth habit [11], western wheatgrass exhibited consistently poor PGC overall and within seasons. In contrast, the wheatgrasses, particularly thickspike and western wheatgrass, exhibited darker color, based on higher GCI, than either tall fescue or Kentucky bluegrass. Nevertheless, at this point, the wheatgrasses are not ready to replace tall fescue or Kentucky bluegrass in higher maintenance production situations. Ultimately, we included the tall fescue and Kentucky bluegrass cultivars to determine how far separated the turf performance of the wheatgrass species was from traditional turf species, and not because we felt their performance would be comparable.

While the species results point to trends and are of interest, the main objective was to identify variation within HSFs of crested, thickspike, and western wheatgrass for advancement in the low-maintenance turf improvement program. For both PGC and GCI, the differences among the HSFs revealed opportunities for selection to develop germplasm sources with better phenotypes than current commercially available cultivars of each species. However, for both traits there was a larger range of phenotypic values for thickspike and western wheatgrass as compared to crested wheatgrass. Narrow sense heritability values were also typically higher for thickspike and western wheatgrass than for crested wheatgrass. The heritability results indicated generally high levels of genetic variation for each species-trait combination with the exception of crested wheatgrass PGC. Under similar conditions, a crested wheatgrass population from a different genetic background exhibited similar to higher levels of genetic variation for turfgrass production [32]. Thus, the population evaluated in the current study may need an influx of genetic variation from different populations for sustained turfgrass improvement. To the best of our knowledge, this work represents the first evaluation of heritability in thickspike and western wheatgrass for turfgrass traits. Therefore, we cannot compare the resulting values with previous work.

The same traits, such as high establishment and persistence, that make crested wheatgrass an invaluable species for dryland agriculture and rangeland revegetation [11], also make it an attractive alternative for low-maintenance turfgrass production. Despite these advantages, its use in low-maintenance turfgrass situation is generally limited to roadsides and wildland recreation properties. As pressure increases to use freshwater supplies more carefully, there will be an increasing need to use supplemental irrigation more efficiently. Both Eurasian and native North American wheatgrasses have potential to be used to maintain turfgrass aesthetics with limited to no supplemental irrigation. Before this becomes a reality there is a need to improve each of these species to ensure acceptable turfgrass quality and function. This study represents a description of the available genetic variation within three wheatgrass populations specifically developed for turfgrass improvement. The results indicated genetic variation among HSFs in each species for turfgrass improvement and relatively high correlation across seasons, at least for PGC. This makes genetic improvement through selection likely for each species. Nevertheless, the usefulness of this germplasm will ultimately correspond to its adaptation to a wider range of target environments. High performing HSFs need to be evaluated and selected across a wider range of environments in western North America. However, these results clearly indicate the potential of these populations as base populations in an applied breeding program to improve wheatgrass for low-maintenance production. Finally, there is a need to identify best management practices, including seeding rate and germination procedures to ensure dense stands of wheatgrass turf.