The most common cause of HIV disease throughout the world is HIV-I which was first iden-tified in West Africa. Since the first cases of AIDS were reported in 19811, more than 179,000 cases of AIDS have been reported in the United States and 113,000 (63%) of these patients have died2. This disease is now a leading cause of death among men and women un-der 45 years old and of children under 5 years. Hematological derangements and anaemia with a trend towards iron deficiency are common. The negative impact of anaemia concur-rent with established HIV infection upon morbidity and mortality has been well docu-mented but the prognostic potential and long-term effects of anaemia & other hematological changes during acute HIV-1 infection remain unknown.The aim of this study was to deter-mine if HIV status influences changes in iron levels and anaemic measurements and to re-late these to progression of disease as judged by CD4 T cell lymphocyte counts.

The first AIDS case in India was detected in 1986 and since then HIV infection has been reported in all states and union territories [1].

The spread of HIV in India has been uneven. Although much of India has a low rate of infection, certain places have higher HIV incidence rate than others. HIV epidem-ics are more severe in the southern half of the country and the far north-east where the highest HIV prevalence rates are found in Andhra Pradesh, Maharashtra, Tamil Nadu and Karnataka in the south; and Manipur and Nagaland in the north-east.

Shortly after the first description of the acquired immu-nodeficiency syndrome (AIDS), cytopenias in all major blood cell lines were increasingly recognized among pa-tients infected with the human immunodeficiency virus (HIV). In one early series of patients with AIDS, anemia was noted in approximately 70%, lymphopenia in 70 %, neutropenia in 50%, and thrombocytopenia in 40% of the patients observed.[2].

During HIV, there are significant peripheral blood changes including a gradual fall in number of CD4 lym-phocytes and an initial surge in CD8 lymphocytes at the asymptomatic period.As the infection progresses, there is a pancytopenia comprising of lymphopenia ,normocytic normochromic anemia and a thrombocytopenia (platelets are normal sized). These haematological abnormalities may be attributable to factors like direct and indirect ef-fect of infection ,opportunistic infections and toxicity of drugs.[3]

The causes of thrombocytopenia and coagulation abnor-malities in patients with HIV infection will be reviewed here.

Thrombocytopenia is a common finding in individuals infected with HIV, affecting approximately 40 percent of patients during the course of their illness . The pathogenic mechanism of HIV related thrombocytopenia is probably multifaceted. Antiplatelet antibodies and circulating im-mune complexes would cause peripheral destruction in the spleen, liver, and bone marrow, in that order; and, on the other hand, there would be an ineffective immune thrombopoiesis and direct infection of the megakaryo-cytes which could cause a change in the function and ma-turity of these cells [4].

Epidemiologic data provide several pertinent observation-sThe incidence of platelet abnormalities appears to in-crease with progressive immunosuppression [5] Thrombocytopenia may be the initial manifestation of HIV infection in as many as 10 percent of patients. Therefore, HIV testing is essential in the assessment of any patient with newly diagnosed thrombocytopenia. Additionally, the degree of thrombocytopenia at presentation varies. In one prospective evaluation, 27, 11 and 5 percent of patie-nts had platelet counts <150,000, <100,000, and <50,000/microL, respectively [6].

Further,anaemia has been well described in established HIV-1 infection, with an estimated prevalence ranging from 10% in asymptomatic HIV-infected patients to 92% in patients with AIDS [7]. However, there is little data on red blood cell parameters during the acute stages of HIV-1 infection. The etiology of HIV-associated anaemia re-mains uncertain but appears to be multifactorial [2]. Anaemia is also recognised to be the most common hema-tologic abnormality associated with HIV, affecting 60 to 80 percent of patients in late stage disease. While anemia may manifest as a mere laboratory abnormality in some individuals, others may experience typical symptoms (eg, fatigue, dyspnea, reduced exercise tolerance, diminished functional capacity) that are directly related to a reduction in hemoglobin concentration [8].

The objective of this study was to describe the prevalence and characteristics of anemia and early hematological changes in patients presenting to a teaching hospital in Punjab.

The present study was conducted in the Department of Microbiology, Adesh Institute of Medical Sciences and Research, Bathinda over a period of two years from May 2007 to May 2009. All the HIV positive patients and sus-ceptible family members presented to the hospital were screened and enrolled into the study if found symptomatic and seropositive.

All the suspected patients were screened by ELISA tech-nique using EIA (Enzyme immunoassay) Kit provided by Ortho diagnostics (India). The samples were assayed on (Automatic Microplate Processor) AMP. Fully automatic EIA reader from Johnson and Johnson was used. 2ml blood sample was collected under aseptic technique for the same and assayed for HIV status. Cut off values for labeling HIV patients more than or equal to 0.250 absorb-ance value for HIV positive patient and less than 0.250 absorbance value for HIV negative patient. If the first ELISA was positive, second time ELISA was done with the same method but with different kit, J Mitra. Cut off values more than or equal to 0.240 absorbance in HIV positive, less than 0.240 absorbance was HIV negative.

After confirmation of HIV positive patients samples of whole blood were sent for CD4 and CD8 cells by flow cytometry.

Information regarding the patients was recorded as per the Performa. The data collected on various variables were subjected to statistical analysis. Mean and standard de-viations were computed. To compare the outcome of two groups, Fisher’s Z test and Chi square tests were applied. Karl Pearson’s coefficient was also applied to see the re-lationship between two variables.

The patients were categorized according to their CD4 cell count into A,B and C categories as per Center of disease control( CDC )classification depicted in Table 1 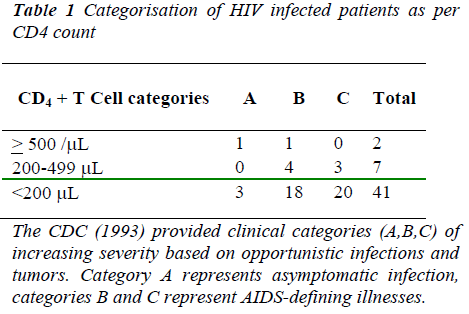 Table 1: Categorisation of HIV infected patients as per CD4 count

According to WHO “anaemia should be considered to exist” when haemoglobin is < 13gm% in adult males and <12gm% in adult females (non pregnan) In the study group, majority of the patients presented with anaemia. Most common form of anaemia was chronic . The low-est haemoglobin observed was 5.6 gm%. 32 out of 36 males (89%) had anaemia and 10 out of 14 females (71.4%) had anaemia. Statistically,there was a significant different in the incidence rate between the 2 gender groups as depicted in Table 2; 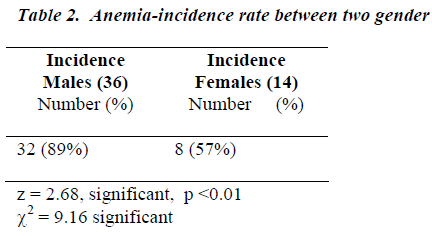 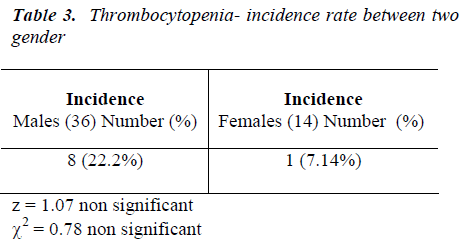 The present study was done to assess the hematological changes in HIV infected patients presenting to a large teaching hospital in Punjab.

Anaemia seen at this stage following acute infection could be thought to reflect impaired haematopoiesis in the setting of early, uncontrolled viral replication and an ex-cess of inflammatory cytokines [9].

Previous reports have suggested that there is an increased risk of anaemia with more advanced HIV infection and over 80% of people with an AIDS diagnosis had some degree of anemia. People at more advanced HIV disease, or a lower CD4 count, had higher rates of anemia (10)The present study was conducted to assess the haematological changes in Hiv infected patients presenting to teaching hospital in pun jab.The results demonstrated that anaemia occurs with increasing frequency during the early stages of HIV-1 infection. Whether this acute infection associ-ated anaemia will resolve during the typically latent pe-riod prior to clinical AIDS remains to be seen. Further-more, whether the presence or severity of anaemia during acute HIV-1 infection will predict anaemia in chronic infection and/or more rapid disease progression also re-mains to be seen. Given the results of other studies that have found anaemia at any point in HIV infection to be an independent risk factor for decreased survival. HIV dis-ease progression is about 5 times more common in people with anemia. Anemia is also linked to a higher risk of death.[11] In established HIV infection, lower haemoglo-bin levels have been shown to correlate with decreasing CD4+ cell count and multiple studies have found an asso-ciation between anaemia during established infection and a faster progression to AIDS and death [6,12,13]. More-over,People with anemia often suffer decreased quality of life as well as increased chance of mortality.A large study with enrolment of more than 1,200 HIV and can-cer subjects showed that low hemoglobin levels are asso-ciated with greater fatigue and a poor overall quality of life. The CDC conducted a large study reviewing medical records of HIV-infected patients and found that the inci-dence of anemia was found to be strongly associated with progression of HIV disease [13].

A study noted [14] that the most frequent form of anae-mia in AIDS had the characteristics of anaemia of chronic disease. The mean hemoglobin levels of patients with AIDS were reported to be between 9 and 10 gm/dL.

Salome MA [15] reported that lower CD4/CD8 values were obtained in anemia of chronic disease ( ACD), and an inverse correlation was observed between IFN-γ and CD4/CD8 in groups with and without anemia.The results confirmed the observation of enhanced immunologic sys-tem deterioration in patients with HIV and ACD.

Haematologic derangements and anaemia with a trend towards iron deficiency are common. The negative impact of anaemia concurrent with established HIV infection upon morbidity and mortality has been well documented but the prognostic potential and long-term effects of anaemia and other haemotological changes during acute HIV-1 infection remain unknown. This study has con-tributed baseline data and provided insights in HIV infec-tion in India. This would undoubtedly serve as a basis for further studies on this topic.