This report describes a rare curative case of local recurrence from poorly differentiated transverse colon cancer treated with resection and chemoradiation. A 49-year-old Japanese man presented with epigastralgia, abdominal fullness and vomiting. Colonoscopy revealed advanced transverse colon cancer. Partial resection of the transverse colon with lymph node dissection and combined resection of the pancreas tail and spleen were performed because of macroscopic direct invasion to the pancreas tail from the tumor. A histopathological examination revealed poorly differentiated adenocarcinoma. Adjuvant chemotherapy was administered using 5-FU/LV. At 6 months later, CT demonstrated a hen-egg-sized mass measuring 4 cm × 3 cm in diameter at the antero-lateral side of the left kidney. Resection of this tumor was therefore performed. A histopathological examination of the tumor specimen revealed metastatic poorly differentiated adenocarcinoma. After resection of the recurrent tumor, chemoradiation was performed. Sequentially, chemotherapy was administered using an oral fluorouracil analog. The patient has been followed up in the outpatient clinic without recurrence for approximately 15 years since undergoing the operation.

An operative specimen revealed an ulcerative lesion in the transverse colon (Figure 2). A histopathological examination with hematoxylin and eosin staining of the tumor specimen revealed poorly differentiated adenocarcinoma (Figure 3). The tumor cells were limited to the subserosal layer. No metastatic regional lymph nodes were identified. Some lymphatic and venous invasion of the carcinoma cells was also observed. The patient had an uneventful recovery and was discharged from the hospital on 21st day after surgery. Adjuvant chemotherapy was administered using 5-FU/LV. 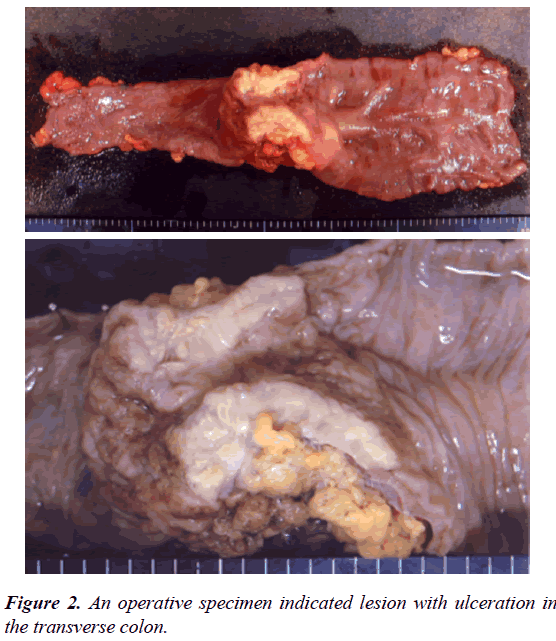 Figure 2: An operative specimen indicated lesion with ulceration in the transverse colon.

At 6 months after surgery, CT demonstrated a nut-sized mass which is 4 cm × 3 cm in diameter at the anterolateral side of the left kidney (Figure 4A). At 8 months after surgery, this tumor had increased to 6 cm × 4 cm in diameter (Figure 4B). Resection of this tumor was therefore performed. At the laparotomy, this tumor was found to have directly invaded part of the left diaphragm, so combined resection of this part was performed. The resected tumor was 8 cm × 6 cm × 6 cm in diameter (Figure 5A). The cut surface revealed infiltrating features (Figure 5B). A histopathological examination with hematoxylin and eosin staining of the tumor specimen revealed metastatic poorly differentiated adenocarcinoma like previous transverse colon cancer (Figure 6). After resection of the recurrent tumor, chemoradiation was performed. Low-dose CDDP (5 mg/day) and 5-FU (400 mg/day) administered with radiation was performed for 5 consecutive days a week. The total dose of radiation therapy was 50 Gy (2 Gy × 25 Gy). Sequentially, chemotherapy was administered using an oral fluorouracil analog.

Figure 6: A histopathological examination (× 200) with hematoxylin and eosin staining revealed poorly differentiated adenocarcinoma as same as the primary lesion.

The patient has been followed up in the outpatient clinic without recurrence for approximately 15 years since undergoing the operation.

Despite apparently complete resection of the colorectal cancer, many patients develop recurrence in the area in which their primary cancer was excised and in more distant organs. There are several theories to explain such malignant recurrence including unrecognized metastasis to the lymphatic channels, shedding of cells from the primary lesion, positive margins, and mishandling of the tumor during initial resection [15]. The sites of first recurrence of CRCs include liver (more than 30%), lung (20%), locoregional disease (20% to 25%), other intraabdominal sites (15% to 20%), and elsewhere (10%) [11]. The overall recurrence rate of CRCs was 27.9%, the anastomotic recurrence rate was 11.7%, and the distant metastasis rate was 14.4% [16]. The local recurrence rate after curative resection of the colon cancer is 3.1%-5.4%, and that of rectal cancer is 16.7% [16,17]. The average time to local recurrence is 13.0 to 21.3 months [16,17]. Although the average time for recurrences is about two years, very aggressive tumors can recur within six months to a year [18]. If no disseminated disease is found, patients deemed candidates for re-excision.

Factors associated with a prolonged disease-specific survival in locoregional recurrent colon cancer included R0 resection (p< 0.001), age< 60 (p< 0.01), an early stage of primary disease (p=0.05), and no associated distant disease (p=0.030) [10]. Poor prognostic factors included more than 1 site of recurrence (p=0.05) and the involvement of the mesentery/ nodal basin (p=0.03) [10]. Complete resection of the recurrent tumor is critical to the long-term survival and is associated with a single site of recurrence, perianastomotic disease, low pre-salvage carcinoembryonic antigen level, and absence of distant disease [10].

Surgery for recurrent disease has been reported in the literature to have a 5-year survival rate of up to 30% [10,12,21,22]. However, it is well known that the chemotherapy for CRCs has significantly improved in the last decade and may have contributed to successful outcomes. Radiation therapy has also been used either alone or in combination with chemotherapy as an adjuvant after surgery to reduce the risk of recurrence. Willett et al. reported an improved survival in patients treated with adjuvant external beam radiotherapy following surgery for locally advanced colon cancer [23]. A multimodality approach using en bloc surgical resection with radiotherapy and chemotherapy affords some patients with locally advanced and recurrent colon cancer a chance for a long-term survival [22]. Taylor et al. indicated that seventy-three patients treated for recurrent colon carcinoma had a median survival of 33.3 months from the time of recurrence, with a 5-year survival of 24.7%. Of note, the 38 patients with recurrent disease whose disease was completely resected had a 37.4% 5-year survival rate [22].