Dental treatment uses materials such as resin that emit unpleasant volatile odors. These odors have been suggested to cause emotional distress and vomiting in patients, leading to the negative recall of dental treatments due to their smell. This study aimed to evaluate brain correlates of the stress response when sniffing the odor of dental treatment materials. Using functional near infrared spectroscopy (fNIRS) and a visual analog scale (VAS) of odor unpleasantness, we evaluated the degree of discomfort in 18 healthy subjects when sniffing resin odor. We measured the activity of the prefrontal cortex when subjects sniffed resin and used a T&T Olfactometer (Daiichi Yakuhin Sangyo. Ltd) to generate C-5 (unpleasant) and D-5 (pleasant) odors. The VAS and fNIRS activity level in the prefrontal cortex were C5>resin>D5 in magnitude. Thus, there was a tendency for prefrontal cortex activity to register the strength of unpleasantness of odors, including those emitted in dental procedures. We conclude that odors used in dental treatment elicit a stress-associated neural response. Therefore, odor protection in dental clinics is important for relieving the stress of patients under treatment.

Many current dental treatments, involve materials, such as phenol-camphor, eugenol, and resin, that emit various volatile odors. These odors have been suggested to cause emotional distress and vomiting in patients, leading to the negative recall of dental treatments in response to their smell [1]. Indeed, the neural representation of smell is located in regions of the brain considered important for processing internal and motivational states, as well as the affective significance of external objects. For example, neuroimaging studies have demonstrated that odor stimuli potently elicit brain activity in limbic regions, such as the amgydala, insula, orbitofrontal cortex, cingulate cortex, and basal forebrain, which are important for emotion and affective memory [2].

Current methods used to measure brain activity in medical and clinical research include positron emission tomography, magnetoencephalography, fMRI, and functional near-infrared spectroscopy (fNIRS). These techniques have also been used in the field of dentistry to study the effects of various oral conditions on the brain [3,4,5,6]. However, the findings of these studies have yet to be translated into clinical dental applications because the above-described systems are often expensive and difficult to operate. In addition, fMRI and magnetoencephalography require the patient’s head to be secured and the patient’s posture to be limited, which precludes incorporation of fMRI with most dental practices.

However, fNIRS is a noninvasive technique that measures brain activity via changes in cerebral blood flow (mainly in the cerebral cortex) by monitoring hemoglobin concentrations with near-infrared light [7]. fNIRS devices can be miniaturized to suit specific purposes, allowing brain activity to be assessed with the subject in any position and without having to remain perfectly still. Therefore, fNIRS is more suitable for clinical applications than other neuroimaging methods. Several fNIRS studies have suggested that fNIRS could be applied to the prefrontal cortex (PFC) to investigate human emotional states [8,9,10].

The PFC has been reported not only to be involved in various cognitive functions and emotions, but also to play important roles in controlling the autonomic nervous system and endocrine system, which are involved in stress responses. Neuroimaging studies have revealed that the PFC is involved in the emotional processing of stress [11]. Thereby, the aim of this study was to use fNIRS to examine the effects of specific volatile odors generated in dental procedures on activity in the PFC in order to better understand smell-associated stress and emotional responses in patients with dental problems.

Eighteen healthy volunteers (13 men and 5 women, average age=28.6 years) participated in this study. None of the subjects had a history of neurological or psychiatric illness. Written informed consent was obtained from each subject. This study was approved by the Ethics Committee of Kanagawa Dental University (approval number 372) and conformed to the STROBE guidelines for reporting observational studies (http:// www.strobestatement. org).

In the present study, fNIRS (ETG7100, Hitachi Medical Co., Kashiwa, Japan) was used to detect changes in cerebral blood flow. The probe had eight illuminators and seven detectors in a lattice pattern, resulting in 22 channels. The system used two different wavelengths (695 ± 20 nm and 830 ± 20 nm) and measured the levels of oxyhemoglobin (oxy-Hb) and deoxyhemoglobin (deoxy-Hb), as well as their sum (total hemoglobin; total-Hb) at a time resolution of 0.1 s. The interoptode distance was 30 mm and the system had the ability to detect cerebral blood flow at a depth of approximately 20 mm from the scalp [12]. In this study, we used changes in oxy- Hb levels as an indicator of changes in regional cerebral blood volume, as Hoshi et al. previously showed that oxy-Hb is more sensitive to brain activity than deoxy-Hb using a rat model [13].

The fNIRS probes were arranged according to the international 10/20 system used in electroencephalography. The probes were standardized to the frontal region covering the PFC. The lowest probe line was positioned along the Fp1-Fp2 line and the center probe was located at Fpz (Figure 1). fNIRS optode positions and several scalp landmarks were digitized using a 3D magnetic space digitizer (PATRIOT; Polhemus, Colchester, VT, USA). We used NIRS-SPM software (Bio Imaging & Signal Processing Lab, Daejeon, Korea; freeware available at http://bisp.kaist.ac.kr/NIRS-SPM.html). fNIRS data (oxy-Hb) were statistically analyzed based on a general linear model and P-values were calculated. 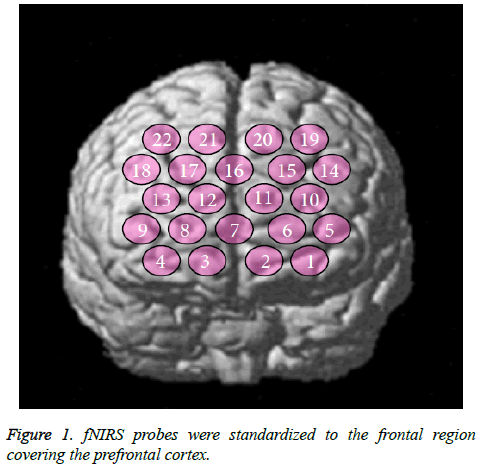 Figure 1: fNIRS probes were standardized to the frontal region covering the prefrontal cortex.

In this task, subjects smelled the odors emitted by resin. In addition, a T&T Olfactometer (Daiichi Yakuhin Sangyo. Ltd.) was used an indicator of comfort/discomfort (C5: discomfort odor, D5: comfort odor). A visual analog scale (VAS) score for discomfort was obtained during the smell task to investigate any psychiatric changes. Prior to measurements, a snort mirror was used to confirm that none of the subjects had nasal congestion. Each procedure comprised 3 stimulations (20 s each) and 4 rest (30 s each) periods (Figure 2). Odors were assigned randomly. During the experiment, we requested the subjects to remain motionless and care was taken not to touch each subject's body in order to avoid causing noise in the fNIRS signal. Cortical activation was evaluated using taskrelated increases in oxy-Hb levels on fNIRS. Oxy-Hb data were averaged across three cycles of the smell task.

Each subject rated their subjective feeling of discomfort during the smell task on a VAS ranging from 0 (no discomfort) to 10 (extreme discomfort). Subjects filled out VAS scores on a prepared form (Figure 3).

Cortical activation was evaluated using the task-related increase in oxy-Hb level. The oxy-Hb data were averaged across the three cycles of the smell task. NIRS-SPM software (Bio Imaging & Signal Processing Lab) [14] was used to identify the task-related area. To remove physiological noise, we performed temporal smoothing by using a Gaussian Kernel and discrete cosine transformation (DCT).

Statistical analysis was performed using a Friedman test and followed by post hoc tests with Wilcoxon’s rank sum tests with Bonferroni correction. The significance level was set at 5%. SPSS 23.0 software (IBM Corp, NY) was used for the statistical.

As indicated in Figure 4a, which presents NIRS-SPM spatial analysis for a typical subject, the PFC was activated by all odors. Confirming this result, we observed activity at channel 1.2.6. We next investigated the time course of PFC activation, as indicated by the changes in oxy-Hb, deoxy-Hb, and total-Hb levels over the course of the experiment (Figure 4b). There was an increase in oxy-Hb and total-Hb in the PFC while smelling all odors. The increase in oxy-Hb was substantial and the relative size of the effect of each odor on oxy-Hb was C5>resin>D5 (P=0.024, Figure 5). However, no significant difference was observed between resin and D5. After cessation of each smell stimulus, oxy-Hb gradually returned to the baseline. VAS scores indicated that all subjects rated resin as an odor unpleasant, though less so than C5 (C5>resin>D5; Table 1). Therefore, the relationships between odors on the VAS exhibited the same pattern as activation on fNIRS. 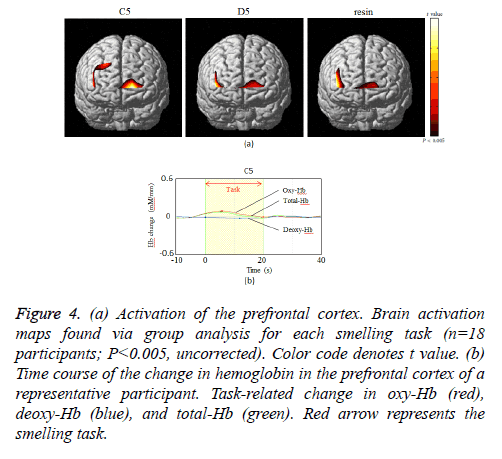 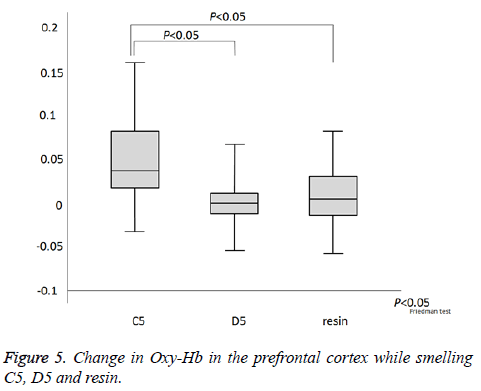 Figure 5: Change in Oxy-Hb in the prefrontal cortex while smelling C5, D5 and resin.

Table 1. Results of NIRS(oxy-Hb) and VAS.

It is well known that the odor is closely related to emotion, and that odor can trigger involuntary recall of emotional memories [15]. Recent neuroimaging studies reported that olfactory stimulation activates the PFC [16,17]. The PFC is closely associated with emotional stress and negative emotional reactions [8,10,18,19]. In this study, smelling C5 (a discomfort odor) and resin odor activated the PFC. These results indicate that exposure to C5 and resin odors generated emotional stress and negative emotional reactions. Thus, our results showing PFC activation to resin may be indicative of the effect of unpleasant odors in dentistry on negative emotions during treatment and affective recall of dental procedures later on. Hoshi et al. reported that pleasant or unpleasant emotions can be recognized based on cerebral blood flow evaluated using fNIRS [18], and their result showing that PFC activity plays a role in the evaluation of discomfort is consistent with the findings of the present study. Our fNIRS data were further confirmed through the VAS results, which revealed that all the materials used in the experiment emitted unpleasant smells. The trends of the VAS and fNIRS data were in agreement with regard to the degree of potency (C5>resin>D5).

These results have important implications for dental practice. Many people experience some apprehension or anxiety when attending a dentist for treatment [4,18,20]. For example, approximately 40% of a Dutch population were found to experience a considerable degree of anxiety regarding dental treatments, with more than half being highly anxious [20]. Smell has been suggested as a cause of anxiety [4]. People with high levels of dental anxiety often report that their anxiety has a large impact on daily life in terms of limited functioning and oral health-related issues [21,22]. Since unpleasant volatile odors associated with dental treatment may elicit stress responses, odor protection using an air purifier may reduce mental stress in the dental treatment room.

In conclusion, our findings suggest that unique odors encountered in dental treatment settings cause a stress response in patients. Reducing odors in dental clinics is therefore important.