RFID is an emerging innovation and has viable connection to animal tracking. A sensor system which utilizes remote innovation is proposed for checking the livestock. Using RFID Livestock can be monitored efficiently against missing animals and new animals can be included in stock and the vaccination procedures can be monitored in a regular basis. This paper contributes and delineates the other method for farm environment monitoring. RFID tagged animals are associated with a reader in a defined range. The amount of RFID information in such a situation is vast. This scenario calls for more calculation and time that are expected to take out profitable data from RFID livestock management system. Consequently, this analysis concentrates on the indexing of the colossal measure of RFID query processing. Here, “R+ tree indexing technique” is put into use to incite the RFID information recovery from the RFID information stockroom. This method comprises of root node, intermediate and leaf node. Every leaf node is shaped as Minimum Bounding Rectangle (MBR) that incorporates information article and its values. Additionally, leaf node stores the Minimum Bounding Rectangle (MBR) and doesn't store the genuine RFID information object. Implementation results show that R+ tree indexing method produces high indexing throughput and less query processing time.

The interest for animal ID and traceability have always acquired a good response, due to quality control and welfare administration of agricultural animals. Further, the sensational impacts of irresistible sickness and the rural economy have highlighted the significance of observing stages of animal capital. The wide selection of advancement on RFID and institutionalization has laid the path for the utilization of innovation through RFD for providing the mechanical structure, over which accurate and intense complex administration of animals can be performed. Utilization of innovation through RFID in any living creature has been followed as practice for years with most of the nations around the globe. Innovation through RFID is utilized to track farm animals and wild creatures, while there are endeavours to institutionalize the strategies so that the particular RFID label is utilized. In order to utilize the advancement in data mechanical system completely and corresponding advances in FARMA venture, the versatile process has coined innovation through RFID which in turn embraces the remote and portable system administration.

The main purpose of the configuration and its framework is the mix of cutting edge cell phones with an extensive information data administration that takes into account disseminated capacity and handling of animals with its hereditary information. Keeping this in view, apart from the viable objective, a straightforward approach towards obtaining a useful and industrially exploitable result has been explored by having the probability of preserving animal related renewable information (as a rewritable RFID tag)[1-7].

Animal tracking application creates a tremendous volume of useful information which is prepared through three stages. An initial step is to channel the voluminous information consequent to which the handling of information is done which gets converted into semantic information finally. With this, RFID information is coordinated into farm management applications. In the RFID stockpiling administration, numerous multidimensional indexing techniques are proposed. However, many of these techniques are not adjusted by the primary database retailers due to the high cost of reconciliation and unpredictability. R-tree and R*-tree are the most widely recognized indexing techniques from R-tree crew. Numerous tests demonstrated that R*-tree offers the best query performance. The main zone where R*-tree falls behind in comparison to other techniques is the development time which is mainly due to the excessive consumption of time for reinsertions. In this paper, effective query processing using R+ tree indexing has been achieved.

Extreme scrutiny is done on the RFID administration for expanding the execution of the information recovery. Few procedures are mentioned in this subsection. A novel warehousing model is proposed to prepare the path forward for the object move, where tables are joined ordinarily to acquire the aggregate parameters by the side of the main activity. Subsequently, these procedures use to diminish the cost, however this current RFID data processing system is not materialized as movement of animals is in immense gatherings. At the point when animals start moving from one area to the next, animal positions are accounted. There are numerous indexing plan methodologies, for example, HR-tree [8], MV3R-tree [9] and 3D R-tree [10] for proficient inquiry preparing about the verifying positions of the moving animal.

All these indexing plans are known as the region based indexing plans, which utilizes the R-tree method [11]. These techniques delineate better execution for time scale and separation range queries. These direction questions are recovered utilizing the direction indexing saving plan keeping in mind the end goal to improve the query processing which incorporates an indexing plan like OP-tree [12] and TB-tree [13]. All of these indexing plans utilize the property known as only way for storing every leaf node.

With this, RFID framework the article identity is given as an estimation of the readings. The primary thought process of the framework is to exchange high volumes of loud readings into precise area occasions. VG-bend acquainted with multidimensional element grouping essential file system that can effectively get to and control RFID information [9]. The proposed thought is not receptive to the request or number of extents of measurements restricted in the question and is just made inside of present business database administration framework. It can handle the colossal volume of multidimensional RFID information. This puts away the RFID information in multidimensional space license handling of a wide scope of queries. Then again, this strategy doesn't give full RFID information recuperation execution when expanded for multidimensionality.

The database holds data about the animals and records the history of their information. It oversees information about stockbreeders, immunization and different functionalities. In this paper we distinguish and look at the qualities of creatures with the assistance of the information present in the database and store the analysed substance again in the database that is ready to be inoculated. High efficiency animals can be cross-breeded with the goal that we get a quality item and can expand the generation (Figure 1). 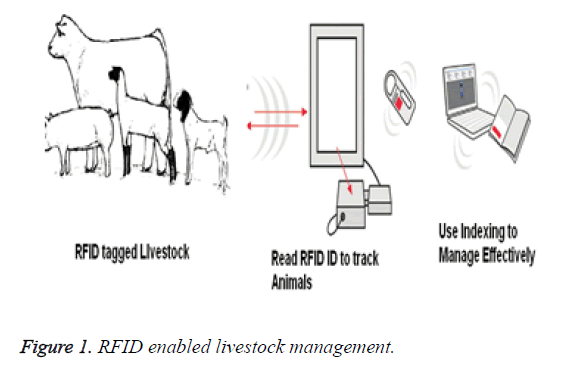 Separating of this information should be possible utilizing some edge esteem as a part of the creation field so we can recognize the creatures effortlessly. Sorting calculations can be utilized to discover the efficiency of creatures from the database. RFID is utilized for cautioning the power about the animals when they cross the fringe of the ranch and they must be inoculated. Database administration is the fundamental point of this paper which is furnished by veterinarian and the agriculturist by providing creature based facts in it.

This topic is to investigate the idea of RFID information indexing technique in animal farm management. At first, the host framework sends the RFID label solicitation to RFID tag reader. The reader is getting the crude RFID tag from the moving animals. At this point, the reader advances the received tag to the host server. Eventually the received raw RFID information is pre-prepared to evacuate pointless data from the RFID tag. In the end, the pre-prepared RFID tag will coordinate with RFID information to overhaul the area or following the moving animal location. The proposed method has additionally two primary information structures; the first is the R+ tree indexing execution and the second is query search processing. They are converged to encourage the hunt procedure to the client and help him to get the full data of RFID label information. As an animal being followed and observed with applications that disseminates into numerous topographically isolate locales, which will have sheer volume of information represents an adaptability challenge. This approach acquires both deferral of noting questions and high correspondence costs without indexing techniques (Figure 2). In this work, we propose a novel list approach for identifying an animal using R+ tree system. Along these lines, this performs derivation and inquiry preparation on RFID streams as the animals are getting watched. An item occasion stream is delivered from raw RFID information stream, portraying the area and compartment of every item. Question handling runs consistently on the item occasion stream and other sensor streams to give back all answers. 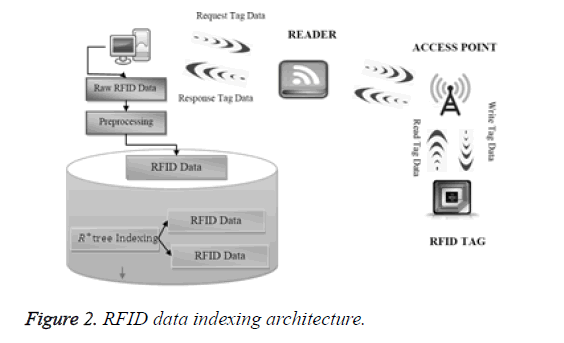 Output: the indexing information of an animal

1: if O is stored locally

7: if Res is not nil return Res

Scalability: The proposed method further test the scalability of our inference system by using larger numbers of animals in the simulation with above mentioned system configuration. Our RFID data processing system can scale to 100,000 animals per warehouse while keeping up with stream speed, totalling 1 million objects over 10 databases. The above reported results for accuracy and communication costs stay true (Tables 1 and 2). The RFID reader reads every second and spends 10 seconds scanning each room. Given such reduced room readings, our proposed system can scale to 1.21 million animals per warehouse while running at stream speed, totalling 12.1 million animals over 10 warehouses. 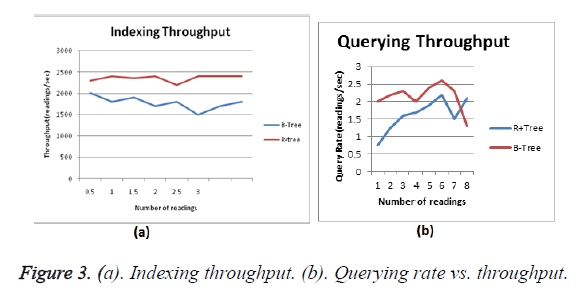 Figure 3. (a). Indexing throughput. (b). Querying rate vs. throughput.