Aim: This study evaluated the effect of lesser yam flour on Pgc-1α expression of brown adipose and skeletal muscle in diabetic rats.

A total of twenty-five male Wistar rats (8 weeks old, ± 180-200 g) were obtained from the Unit of Animal Development for Research, Institut Pertanian Bogor (IPB). Rats were individually housed in a temperature and humidity chamber controlled with good lighting (12 h light/12 h dark). During the acclimatization for 7 days, the rats were fed a standard diet (Table 1).

Rats were divided into 5 groups: normal rats (K1), diabetic rats (K2), diabetic rats+lesser yam flour 1.25 g (P1: 1.25 g), diabetic rats+lesser yam flour 2.50 g (P2: 2.5 g), and diabetic rats+lesser yam flour 5.0 g (P3: 5 g). Diabetes was conducted in rats according to Broca et al. [18]. In brief, rats were injected with 65 mg/kg BW streptozotocin (Nacalai Tesque, Japan), 15 minute after being injected with 120 mg/kg BW nicotinamide (Sigma Aldrich, USA). Diabetic was confirmed by plasma glucose after 5 days induction. In this study, rats were considered in diabetic condition if their fasting blood glucose>140 mg/dL. Animal diet was derived from the standard diet by substituting corn flour with lesser yam flour (Table 1). All animals were treated for 4 weeks. Blood was drawn from orbital sinus of the animals before and after treatment with anesthesia. At the end of the treatment, the animals were sacrificed to collect the BAT from interscapular, and skeletal muscle from gastrocnemius. The tissues were fixed in 10% of formalin and embedded in paraffin before analysis. This study was approved by the Medical and Health Research Ethics Committee (MHREC), Faculty of Medicine, Universitas Gadjah Mada.

Plasma glucose was analysed using a commercial kit (Diasys, Holzheim, Germany), according to the manufacturers’ protocol.

Pgc-1α expression in both Brown adipose tissue and skeletal muscle

Around 3 μm paraformaldehyde-fixed tissues with deparafined were committed by xylol I, II, III and then rehydrated with absolute alcohol, 95% and 70% for 3 minute. Streptavidin-peroxydase was inactivated by 1% hydrogen peroxide in methanol for 15 min at 4°C. The tissues were added a specific antibody or primary antibody (bs-1832R; 1: 200 dilution) and incubated overnight at 4°C. The secondary antibody was added and incubated for 30 minutes at room temperature. This study used diaminobenzydine as the chromogen, and hematoxylin meyer as a counterstain and mounting using E-Z mount. The expression of Pgc-1α protein was signed with the brown color in the nucleus of tissues (skeletal and brown adipose). The expression of Pgc-1α was calculated as follows: expression (%)=brown nucleus cell (Pgc-1α)/total cell × 100%.

Expression of Pgc-1α in Brown adipose tissue and skeletal muscle 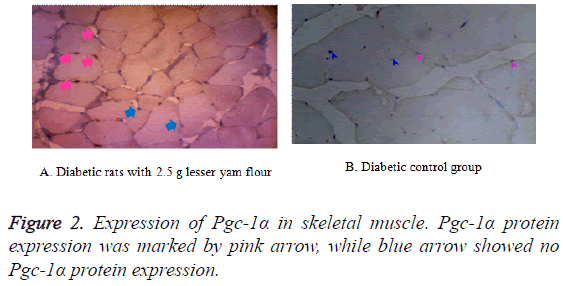 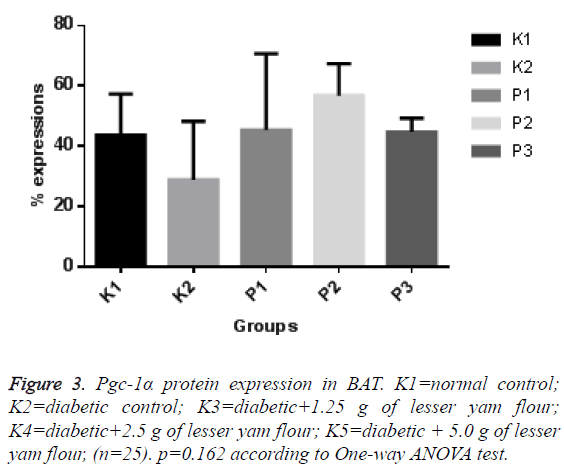 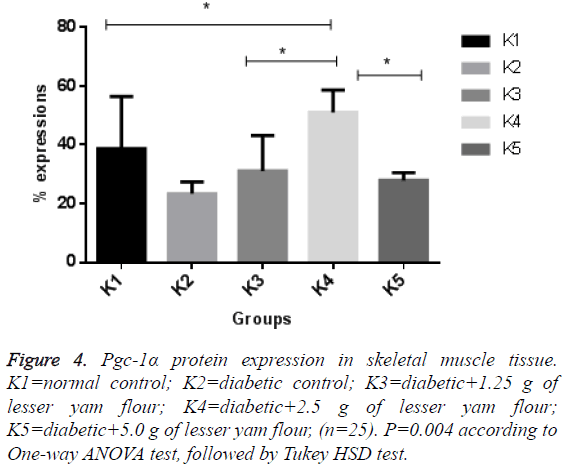 Significant difference was set at P<0.05.

The decreased of the fasting plasma glucose in the diabetic rats after administration of the lesser yam flour for 4 weeks showed that the lesser yam flour has antihyperglycemic. These results are consistent with previous studies; Harijono et al. [19] reported that the administration of water-soluble polysaccharides of lesser yam can lower fasting plasma glucose levels of hyperglycaemic rats. Lesser yam is a good source of dietary fiber and resistant starch [16]. Treatment of dietary fiber and resistant starch in the diabetic subjects were able to reduce plasma glucose levels [20,21]. It is also known that dietary fiber is able to control blood glucose levels through several mechanisms such as slowing of gastric emptying and absorption of nutrients, including glucose [22]. However, in this study, the diabetic rats that received 5 g of lesser yam flour had glucose levels higher than those receiving 1.25 g and 2.5 g of lesser yam flour. This might be due to a high intake of dietary fiber or resistant starch may supply energy through fermentation by colonic bacteria [23]. Resistant starch is one type of starch that resistant to enzymatically degradation in the gut [14], while inulin can be slowly digested [22]. Both carbohydrates can be fermented by colonic bacteria to produce SCFAs, especially butyrate [24]. A previous study showed that administration of sodium butyrate could increase expression of Pgc-1α in BAT and skeletal muscle. Butyrate is able to induce the expression of Pgc-1α due to inhibition of Histone Deacetylation (HDAC) activity. Inhibition of HDAC activates Histone Acetylation (HAT), and opens chromatin DNA for transcription initiation and elongation of Pgc-1α mRNA [13].

In this study, the expression of Pgc-1α protein in both BAT and skeletal muscle in the diabetic rats with the lesser yam flour was higher than in those without the lesser yam flour. It shows that the reduced of the fasting plasma glucose may through increased of the expression of Pgc-1α protein. The expression of Pgc-1α in several organs, mainly BAT and skeletal muscle, represents mitochondrial function in both animal and human model [25]. Recent study suggested that mitochondrial function was closely related to homeostasis of glucose and dysfunction of mitochondrial that found in T2DM and insulin resistance condition [1]. Impaired of mitochondrial function lead to decreased oxidative capacity [26]. Previous report showed in T2DM rats was found decreased of expression of cytochrome C-oxidase (COX), an enzyme that play a role in production Adenosine Triphosphate (ATP), thus result in decreased ATP production [27]. Under a condition of chronic low energy due to impairment mitochondrial respiration, the insulin-independent glucose transport system may possibly upregulated; result in an accumulation of glucose. Increased glucose load is accompanied by a reduction in aerobic glucose oxidation, can lead to excess glucose. Excess glucose can be streamed to gluosamine pathway that leads to insulin resistance. Under hyperinsulinemic condition, glucosamine can cause downregulation of genes that involve in Oxidative Phosphorylation (OXPHOS), including Pgc-1α [8]. Previous research has shown that expression of Pgc-1α decreased in the diabetic subject [28].

This research was supported by funding from the Community Fund, Faculty of Medicine, Universitas Gadjah Mada. We also admit to Dianandha Septiana Rubi.