Ulcerative Colitis (UC) is one type of Inflammatory Bowel Disease (IBD). The clinical manifestations of UC patients include diarrhea, purulent stools, abdominal pain, tenesmus and systemic symptoms in different degree in persistent or recurrent episodes. The pathology is changed into diffuse tissue reactions, including ulceration, crypt abscess, small vessel inflammation, goblet cell decrease, and infiltration of various inflammatory cells and nonspecific manifestation [1]. Due to the wide range, repeated attacks, poor treatment, disease progression, cancer possibility and other characteristics, the UC lesions has been identified as a modern refractory disease by WHO. The treatment of UC includes medication, nutrition, psychotherapy and surgical treatment. Among them, the drug treatment is the main method for the treatment of ulcerative colitis [2]. However, drug treatment has some side effects, which produces some influence on the patients.

Study has pointed out that the intestinal microflora imbalance is one of the important causes of UC, and the probiotics in active inflammatory bowel disease can alleviate colitis to certain extend. Remission by induction and prevention of recurrence and complications are purposes of the treatment of inflammatory bowel disease [3]. The intestinal flora runs through this cascade process. The remission of inflammatory bowel disease is very short for many patients who undergo the surgical treatment after repeated attacks. The pouch it is incurring after ulcerative colitis surgical procedures is usually caused by the decrease of the number of normal bacteria flora, such as lactic acid bacteria and bifid bacteria, around the pouch [4].

As a hapten, the sulfamethoxazole can induce contact allergic reactions in different parts of mice. The ulcerative colitis is an inflammatory bowel disease mediated by Th2 cell while the mouse colitis model induced by sulfamethoxazole is a kind of Th2 colitis mediated by the IL-4 colitis [5]. Ketones can produce a series of effects on the colon. NK-T (Natural Killer- T) cell resistance-CD3/and -CD28 secrets a large number of Th2 cytokines after simulation, which results in ulcerative colitis. The UC model is similar to the pathogenesis of human colitis [6]. Therefore, it is often used to detect the physiological activity of functional foods.

China's Qinghai Tibet Plateau produces a special kind of naturally fermented food-Yak Yogurt due to unique geographical environment, fermented containers, fermented microorganisms and fermentation techniques [7]. Studies have shown that yak yogurt has the effects on antioxidation [8], lowering cholesterol [9] and improving immunity [10]. The lactic acid bacteria isolated from yak yogurt also have certain antioxidant effects [11] and intestinal biological activity [12]. The Lactobacillus plantarum is obtained by identification and separation and purification from Yushu Yak milk from Yushu Tibetan autonomous prefecture of Qinghai in this study, which is better than Lactobacillus bulgaricus in vitro anti-gastric acid and bile salt effects, and is named Lactobacillus plantarum YS-2 (LP-YS2). In this study, taking LP-YS2 as the research object, the preventive effect of LP-YS2 on oxazolone inducing the colitis was observed at the first time. Results of the study will accumulate certain theoretical basis for the further development of LP-YS2, conducive to the development and use of LP-YS2.

The 50 BALB/c male mice were randomly divided into 5 groups: normal group, control group, LB group, LP-YS2-L group and LP-YS2-H group with 10 mice respectively. The normal group and the model group were fed normally without any other treatment; mice in group LB, group LP-YS2-L and group LP-YS2-H received intragastric administration of 2 ml of lactic acid bacteria fluid at 1 × 109, 1 × 108 and 1 × 109 CFU/ml daily for 26 d, respectively. On fifteenth day after the experiment, the abdominal area of all mice was shaved at 2 cm × 2 cm of area, and mice of normal group were coated with 0.2 ml of 99% ethanol. In the other group, the abdominal cavity was coated with a solution of 0.2 ml (3% mass ratio, and ethanol as solvent). On Nineteenth day after the start of the experiment, the mice go through the anesthesia (chloral hydrate 0.1 ml/10 g) after fasted for 24 h, and then the mice anus was inserted silicone tube blunt with depth of 3.5 cm. Mice of normal group were injected 50% ethanol solution of 0.15 ml, the mice in other groups were injected 1% oxazolone solution 0.15 ml (the mass ratio, 50% ethanol as solvent); the catheter pulled out after 20 s, and the mice were inverted for 30 s. On 26th d since the start of the experiment, all mice were killed by breaking the neck and then plasma and colon tissue of the mice was collected, and the weight and length of the colon were measured. In the meanwhile, Disease Activity Index (DAI) was determined using the formula: DAI=(score of weight loss+score of defecate character+score of hematochezia)/3 (Table 1) [5].

The plasma was centrifuged at 3000 r/min for 10 min, and the serum was collected. The IL-2 and IL-10 cytokine levels in serum were measured by the experiment kits (Abcam, Cambridge, MA, USA).

The 2 ml normal saline was added to colon tissues (2 g), and the tissues were homogenated using high speed tissue homogenizer (T10), the tissue of mice was homogenized, and the total RNA of the colon tissue was extracted by RNAzol, and then the total RNA concentration was diluted to 1 μg/μL. The 2 μL diluted RNA extraction liquid is added oligodT18, RNase, dNTP, MLV enzymes with 1 μL and 10 μL of 5X buffer, the synthesized cDNA is realized at 37°C for 120 min, 99°C for 4 min, and 4°C for 120 min respectively. The mRNA expressions of nNOS, eNOS, iNOS, c-Kit, SCF, IL-8 and CXCR2 are amplified (Table 2) by reverse transcriptionpolymerase chain reaction method (one time at 94°C for 5 min, 30 cycles for 94°C for 30 s, 58°C for 30 s, and 72°C for 30 s in order, and one time at 72°C for 5 min) while the GAPDH as reference is to simplify it. Finally, 1% ethidium bromide agar electrophoresis is adopted to check PCR amplification products and Image 1.44 software is used for semi-quantitative analysis [13].

Table 2. Sequences of reverse transcription-polymerase chain reaction primers were used in this study.

The experiment was carried out in three parallel experiments, and the results were averaged. The data were compared to significant differences using SAS9.1 statistical software (SAS Institute, Inc., Cary, NC, USA) and the one-way ANOVA method to analyse (P<0.05). 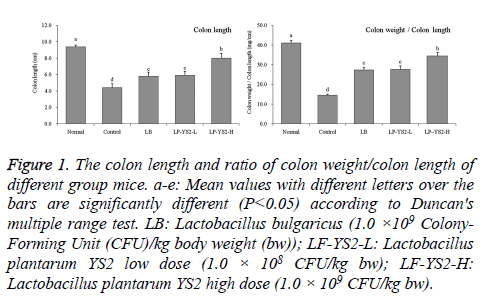 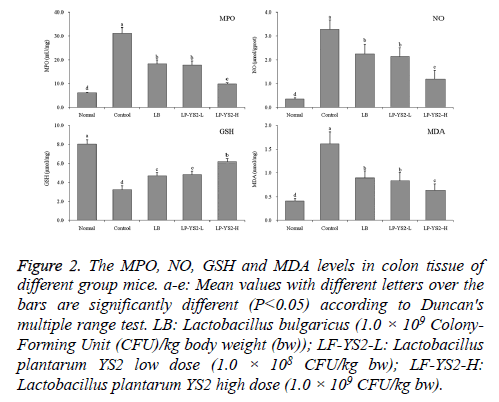 Cytokine levels in serum of mice 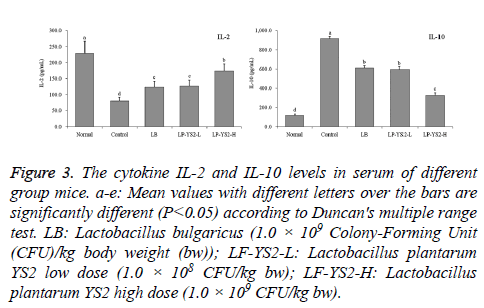 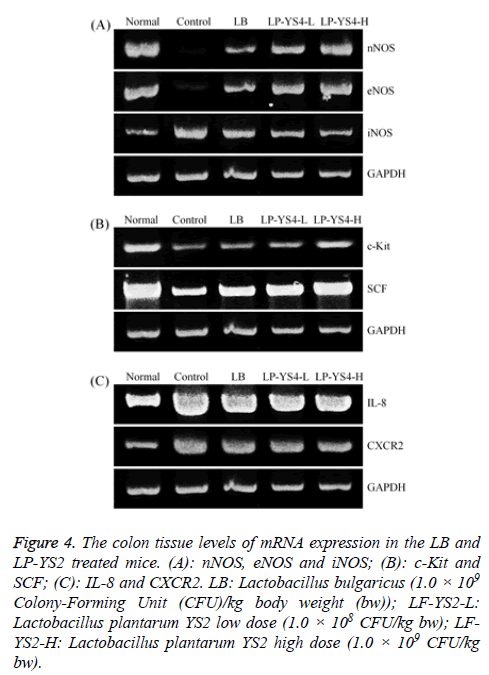 Colon tissue expression of c-Kit and SCF in mice

Colon tissue expression of IL-8 and CXCR2 in mice

UC would lead to the loss of the body weight, diarrhea, bleeding and other symptoms, so weight, stool property, and hemafecia are taken as the standard DAI score that is used as a measure of the standard degree of colitis [14]. The DAI index showed that LP-YS2 could reduce the symptoms of LP-YS2 induced colitis, and the effect was better with the increase of concentration. The ratio of colon length to colon weight/colon length was also the criterion for the extent of colitis. The colon length of colitis mice was shorter than that of normal mice, and the colon weight/colon length ratio was lower [15].

The pathological mechanism of ulcerative colitis is still unclear, most of the research thinks that that many biochemical mediators, including cytokines, growth factors, NO and adhesion molecules play an important role in abnormal immune response on mediating. NO in physiological doses play an important protective role in the digestive system, but excessive production of NO or increased sensitivity to gastrointestinal smooth muscle can lead to ulcerative colitis [16]. MPO is an enzyme in neutrophils, determines the degree of neutrophil infiltration by determining the activity of MPO that is a reliable indicator of neutrophil infiltration in the organization. The study indicates that the MPO activity for colitis mice was significantly higher than mice in normal group [17]. At the same time, the experimental colitis study showed increased lipid peroxidation, decreased free radical scavenging ability, decreased GSH activity, and increased MDA as the end product of lipid peroxidation for colitis model mice [18].

The local immune tolerance of intestinal mucosa is broken, and the disorder of immune response is caused by the bacterial antigen in the gut cavity, which leads to the dysregulation of immune effector T cells as one of the important pathogenesis of UC [19]. The immune effector T cells are mainly CD4+ Th cells. After activation, they can differentiate into different subsets, including Th1, Th2, Th17 and Treg. These 4 groups of cells play different roles in the development, persistence and remission of UC inflammation by secreting a series of cytokines (such as IL-2, IL-4, IL-17, and IL-10) [20]. Under UC symptoms, levels of IL-2 decreased and IL-10 increased substantially [21].

There are two main types of NOS in vivo, cNOS (including nNOS and eNOS) and inducible (iNOS). The main mucosal layer of UC is iNOS. cNOS is the dependent enzyme for calcium ion and calmodulin in neuron of airframe part. Vascular endothelial cells have stable activity, and release persistently small amounts of NO as neurotransmitters, which play a role in local blood flow regulation with a protective effect on intestinal mucosa [22]. iNOS is an inducible enzyme that is not expressed in resting state and is enhanced when cells are stimulated by inflammation; At the same time, the expression levels of nNOS and eNOS increased under UC state [23].

ICC colitis appeared excessive autophagy, which lead into the programmed death, decreased organelles expressing in pathological microscopic structure. The reduction of the expression of c-Kit presents in molecular biology in case of a large number of reduced or absent autophagy [24]. SCF is a multifunctional growth factor, and activates the tyrosine kinase combined with c-Kit that leads to a series of phosphorylation process, and play an important role in the regulation of proliferation, differentiation and migration process in a variety of Kit positive cells (including ICC) [25]. The proliferation and differentiation of ICC are affected when mutations in the loci encoding SCF are mutated and the SCF/Kit signaling pathway is impaired [26].

The present research was supported by Chongqing Research Program of Basic Research and Frontier Technology (cstc2016jcyjA0820), the Program for Innovation Team Building at Institutions of Higher Education in Chongqing (CXTDX201601040) and Research Project of Chongqing University of Education (KY2015TBZC), China.

There is no conflict of interest.