An Excretory Secretory protein antigen of 6 kDa (ES-6) was isolated from Mycobacterium tuberculosis H37Ra culture filtrate by gel filtration using fast protein liquid chromatography. Seroreactivity of ES-6 antigen was compared with earlier reported diagnostically useful ES-31 and ES-43 antigens at different stage of pulmonary tuberculosis and in household contacts of the patients. The ES-31 and ES-43 antigens showed good immune response in chronic and relapse cases respectively while ES-6 antigen has shown comparatively low immune response in these cases. However ES-6 showed in-creased seroreactivity in household contacts of pulmonary tuberculosis patients. These results suggest the heterogeneous responses of antigens in different disease conditions and immune response to ES-6 antigen may be associated with latent infection for predicting active disease in course of time, as observed in the follow up of these individuals.

Tuberculosis is still prevalent in developing countries and is the leading killer disease. Co-infection with human immunodefi-ciency virus (HIV) and Mycobacterium tuberculosis increases the risk of developing tuberculosis [1]. In addition, multi drug resistant tuberculosis is rapidly spreading and more efficient methods to prevent and control the disease are urgently needed. A major obstacle to effective tuberculosis control and its eventual elimination is the inability to accurately identify the subset of persons who are infected with tuberculosis. Serodiagnosis of tuberculosis is considerably simpler and cheaper and hence extensively investigated [2,3]. Lack of reliable diagnostic test for all cases of tuberculosis may be due to the substantial and unexplained heterogeneity of humoral response to different antigens of M. tuberculosis [4,5]. Hence it will be of interest to analyze the humoral immune response to different excretory secretory (ES) antigens of M. tuberculosis among the patients with active disease and healthy contacts with latent infection who are at risk of getting full blown disease. Hence in this study an attempt was made to investigate serological response using different M. tuberculosis ES-31, ES-43 and another low molecu-lar weight ES-6 antigen.

A patient who has been declared cured of any form of tubercu-losis in past by a physician after one full course of chemotherapy and has again become sputum smear positive.

A patient who remained or became again smear positive after completing a fully supervised re-treatment regimen.

Blood samples were also collected from 20 healthy individuals with no history of contact with tuberculosis patients of this local-ity served as healthy control. Blood samples were also collected from 10 contact cases with history of person-to-person contact. These includes Household contacts persons living for > 6 months in the same house with the patient. Sera were sepa-rated and stored at –20°C with 0.1% sodium azide.

Fractionation of M.tb ESL antigen by FPLC, using superdex 75 HR 10/30 gel filtration column chromatography, resolved into a single peak (fig.1). The fractions under the peak were pooled and designated as ESL-G. When analysed by indirect ELISA, the fraction showed higher antigenic activity (at antigen concen-tration of 0.2 μg/ml i.e. 1ng/stick). ESL-G protein on separation by SDS-PAGE using 15% nongradient gel and silver staining showed a single protein band corresponding to a molecular weight of approximately 6 kDa (fig. 2) and was labelled as ES-6 antigen. 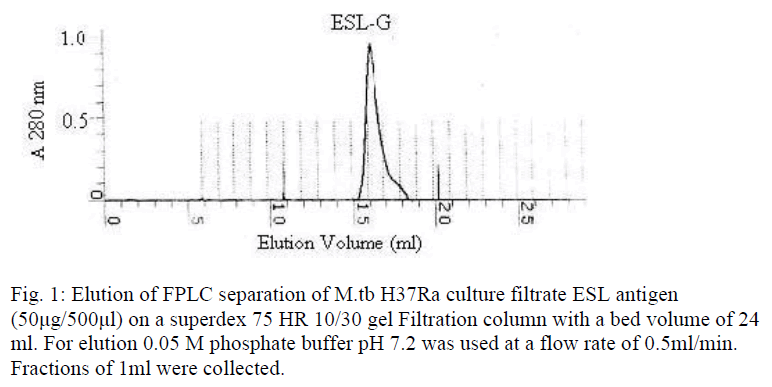 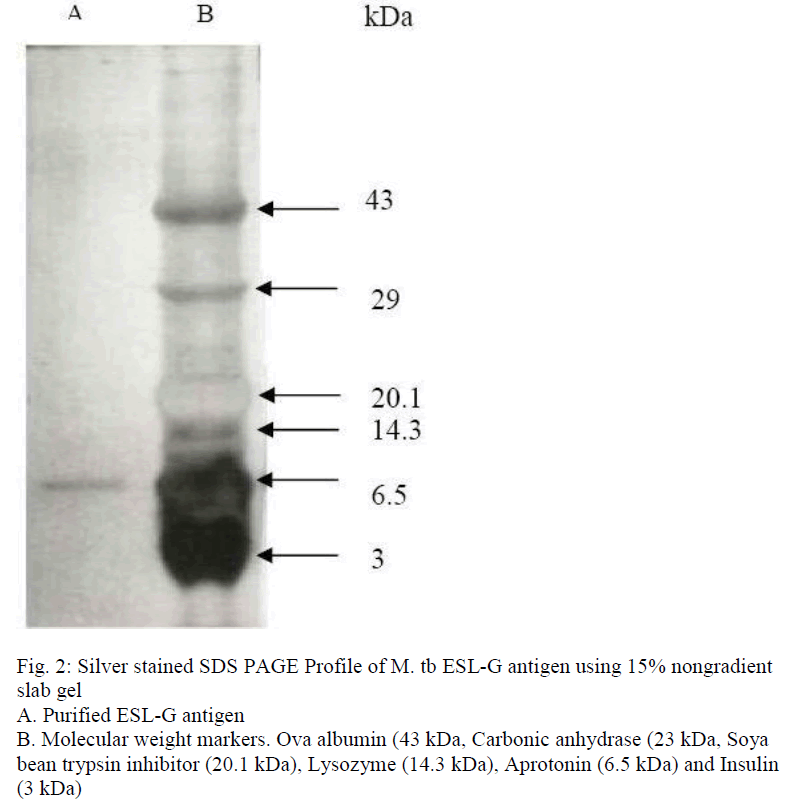 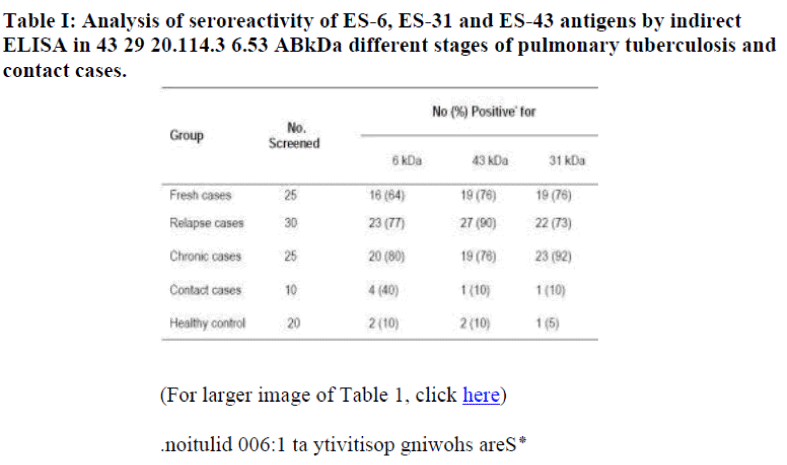 Culture filtrate contains large number of excretory-secretory proteins and few have been purified and studied in detail. In the view of current alarming increase in the incidence of tuberculosis all over the world, there is now more than ever, an urgent need for research in identification of antigens of diagnostic and immunomonitoring interest in tuberculosis. It has been suggested that surface proteins and proteins actively secreted by Mycobacterium tuberculosis are important targets of immune system during the early phase of an infection. In the present study a low molecular weight ES-6 antigen was isolated from Mycobacterium tuberculosis H37Ra culture filtrate and it’s reactivity was compared with earlier reported diagnostically useful ES-31 and ES-43 antigen which had shown more reactivity in chronic and relapse cases respectively [7]. Further the reactivities of these antigens were compared in household contacts which are at high risk of having sub clinical infection due to continuous exposure to tuberculosis patients and may develop disease and hence need to be diagnosed early for effective tuberculosis control and arrest disease development.

The ES-6 antigen has shown comparatively less reactivity in fresh, relapse and chronic cases compared to ES-31 and ES-43 antigens. The GMT of tuberculous IgG antibody was lower for ES-6 antigen fraction in these groups, compared to ES-31 and ES-43 antigen fractions. However 40% household contact cases showed reactivity to ES-6 antigen compared to 10% to ES-31 and ES-43 antigens. The GMT of tuberculous IgG antibody to ES-6 antigen was higher in these cases compared to ES-31 and ES-43 antigens. Thus results shows heterogenecity of humoral immune response to different antigens of Mycobacterium tuber-culosis in the patients with different stages of disease, as observed in our earlier studies [7,8] which are in agreement with other studies [5,9]. Further it can be speculated that positivity to ES-6 antigen may be more associated with sub clinical or latent infection. Andersen et al [10] has shown proteins from low molecular weight regions 4-11 kDa and 26-35 kDa to possess marked stimulatory properties, out of which prominent immuno-stimulatory Tcell antigen ESAT-6 has been characterized to Mycobacterium tuberculosis complex specific. Cell mediated response to ESAT-6 measured by lymphocyte proliferation or gamma interferon production has been studied in active tuberculosis patients and healthy household contact (often higher levels than tuberculosis patients) and general population samples in endemic countries [11-14]. However few studies have been reported on humoral response to ESAT-6 antigen. Silva et al [9] found that humoral response to 38 kDa antigen was correlated with active tuberculosis disease while ESAT-6 and 14 kDa correlated with inactive rather than active disease and may be associated with reactivation of disease.

We thank Shri Dhirubhai Mehta, President, Kasturba Health Society and Dean, Dr. (Mrs) P. Narang for their keen interest and encouragement for this study. This work is partly funded by grant from CSIR. Our thanks are due to Dr. Kalsait, District Tuberculosis Officer, Dr. Hiwrale, Medical Officer, Civil Hospital, Wardha and their staff for extending cooperation in follow up patients. Technical assistance of Mrs. S. Ingole is appreciated.