Is there a correlation between objective and subjective pain measurements and gamma oscillation frequencies?

Pain is a primal neurological and psychological function supporting self- preservation but prone to aberrant processing. Objective and subjective pain measures exist which are regarded as key outcomes with significant clinical indicators of change. The relationships between these measures warrant further exploration. The objective of this observational study was to explore potential correlation between objective and subjective pain measurements and gamma oscillation frequencies. Baseline characteristics were collected and brainwave activities were recorded via an EEG device for 37 undergraduate osteopathy students in a convenience sample. Pain pressure threshold was recorded via an algometer and participants were asked to complete a numeric rating scale (NRS) for pain. Multiple regression tests were analysed for correlation between the participant baseline variables (age, gender, anxiety levels, height and weight). High gamma oscillation, PPT and NRS were seen to have a significant correlation (p>0.05, r²=0.911 (95% Confidence Interval 0.83 - 0.96)). Exercises targeting modulation of gamma oscillations may play an important role in pain control. Whilst findings are significant, the generalisation of the results in this study is limited and further research into gamma oscillations in chronic pain populations is warranted.

Perspective: This article explores the relationship between pain measures and gamma oscillation frequencies. This relationship could potentially assist in pain control through directly targeting gamma waves through gaming activities.

Pain is a common experience and a highly subjective sensation yet the neural mechanisms underlying pain perception are not well understood [1,2]. There have been studies suggesting a link between gamma oscillations and pain perception [3,4] but limited research links gamma oscillations to pain pressure threshold. Pain has obvious sensory qualities but it can also be subject to psychological expectations and state of mind [1].

The International Association for the Study of Pain considers the sensation as: 'An unpleasant sensory and emotional experience associated with actual or potential tissue damage or describes in terms of such damage' [5]. This indicates that an individual’s experience of pain is subjective and depends on a complex integration of not only emotional factors but possible physiological damage. Consequently, multifactorial modalities are implicated in the treatment of pain.

Gamma oscillations have been suggestive to be indicative of conscious pain perception and consequently could be used to assess chronic pain patients [9]. A study on rats suggested that during late stages of chronic inflammatory conditions gamma oscillations increased considerably. This indicates that elevated gamma oscillations may be a potential biomarker for chronic pain [14]. EEG signals were observed during tonic muscle pain in humans which also detected enhanced levels of gamma oscillations parallel to pain intensities [15].

Asymptomatic healthy subjects between the ages of 18 and 59.

Participants suffering any conditions affecting the nervous system, musculoskeletal system or any condition that may affect pain perception.

The piloted study was conducted at the Teaching Clinic of the European School of Osteopathy between June and September 2015; the same treatment room was used each time for consistency. Information sheets, consent forms and questionnaires were dispensed and participants were asked to give a subjective pain measurement using a numerical rating scale (NRS) which rated from 0 to 10 (0 represented ‘no pain’ and 10 represented “worst pain imaginable”) [21].

Participants were then blindfolded while lying in a supine position on a clinic couch. Verbal communication was not permitted during the data gathering process outside of initial instruction.

The EEG Myndplay headband was then used to record neural activity via three electrodes; one clipped to the participant’s ear lobe, the following two placed onto the forehead. The data was recorded onto a laptop PC while the participant lay still for 10 minutes. The mean scores of the gamma oscillations were calculated for 10 minute periods.

Once the readings were recorded and EEG band was removed, the Force Dial was then used to identify an objective PPT score. Participants were asked to say stop when they began to experience discomfort. Measurements were taken from the right thenar eminence, common extensor tendon of the forearm and the levator scapula muscle. The mean of the three PPT readings were then calculated and used as the individuals PPT score.

This study was conducted in compliance with the principles of the declaration of Helsinki (1996) and all of the applicable regulatory requirements. The protocol was approved by the European School of Osteopathy Research Ethics Committee.

Thirty four healthy participants, aged between 18–59 years, provided data for analysis. The baseline characteristics and data collection can be seen in Table 1.

Shapiro-Wilks’ test and Q-Q plots indicated that the data did not conform to a normal distribution (p<0.05), consequently Spearman’s Correlation was applied to the data (r²=0.91, 95% CI 0.83 to 0.96, p<0.0001) indicating significant correlation between gamma oscillations and PPT (Figure 1). 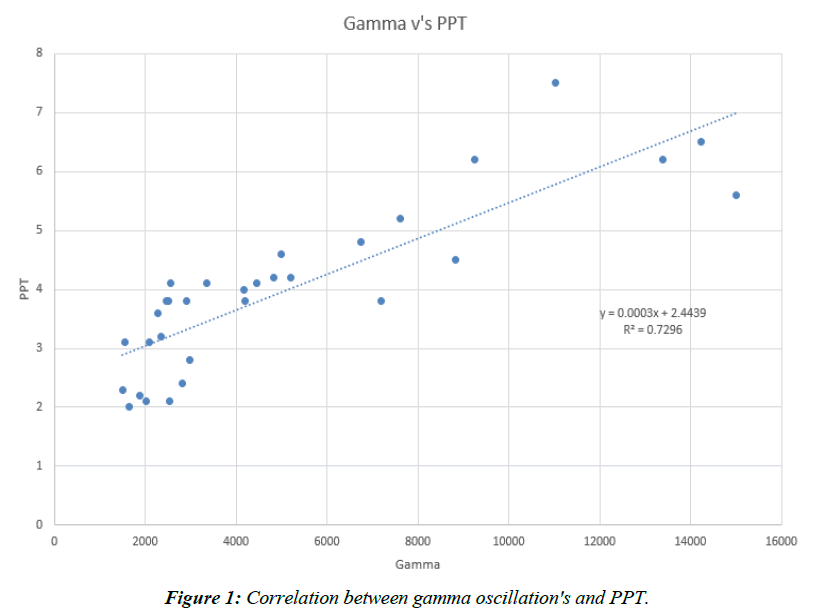 Subsequent multiple regression test indicated PPT and NRS to be significant predictors of gamma variability (p<0.05). All other variables appeared to have no significant effect in the regression model (p>0.05) (Table 2).

Table 2: Interval correlation and P-values of variables from regression test.

Results from the Mann/Witney-U test to check for group differences in gamma levels between genders, indicated higher levels of gamma frequencies in females (p<0.05).

Gamma oscillations have been associated with working memory and verbal and non-verbal cognition tasks [24,25]. Therefore the state of mind of the cohort must also be considered, all of which were students experiencing the rigours of an undergraduate programme. Strong religious beliefs and praying has been implicated with decreasing pain [26]. Religious participants were able to reduce pain sensation during prayer and it has been indicated that prayer may play a role in pain management [27,28]. Religion is an artefact of complex interactions amid cultural systems and basic human brain function. Muslims after prayer were shown to have increased gamma oscillations, likewise Carmelite nun’s gamma oscillations also increased during prayer [29,30]. These cognitive processes seem to rely on the neural mechanism of descending pain inhibition in which gamma oscillations appear to play a key role. The religious beliefs and adherence to faith were not explored in the current study’s sample.

A cognitive distraction task was used whilst subjects received intermittent painful thermal stimuli. The more cognitively demanding the interference task, the more the pain intensity scores significantly reduced, suggesting that cognitive processes may modify pain [31]. High working memory load influences the neuronal response to painful stimulation in the dorsal horn of the corresponding spinal segment [32], which may provide explanation for why art, light and music therapy are perceived to be effective [33]. Findings also indicate that high gamma oscillations assist in the successful implementation of working memory [25]. Gamma oscillations have been associated with not only memory but perhaps a fundamental role allowing it to sub-serve to numerous cognitive functions [34]. Gamma oscillations’ role in cognitive processes may allow for direct targeting with potential modulation of pain coming from a gamma-effective strategy.

Emotions have been shown to potentially play an important role in pain, with positive emotions decreasing pain and shifting attention away from pain [35,36]. Participants that undertake social interactions and received support compared to those alone reported less pain [37]. Gamma oscillation appears to be enhanced during emotional situations [38,39]. Buddhist meditators’ gamma oscillations are reported to increase further when mediating on loving-kindness and compassion [40]. Gamma oscillations also appear to be enhanced when normal participants process emotional stimuli [41]. The emotional state of the individuals in this current study was not screened and may have had some influence on their responsiveness.

It is suggested that PPT decreases with age, [42] however age was not shown to be a confounding variable and had no implication on the correlation in this present study. This was possibly attributable to the narrow age range encountered. Soetanto et al. [43] suggested that men tolerate more pain than women. Women appeared to have a higher PPT in this study compared to men with females being the predominant gender in this study. A study by Racine et al. [44] conversely rejects the notion that there is a pattern in sex differences in pain sensitivity. There have been proposals that there were differences in responses to pain by different ethnic groups, this data was not collected in this study and should be assessed in further studies [45].

A constant flow of sensory information means that a number of events compete for neural representation and perception, needing to optimise the utilization of cerebral processing resources [7]. Mechanisms of processing sensory information include gamma oscillations, representing modulation of neural oscillations [7,49,50]. Gamma oscillations have also been witnessed in response to painful stimuli [51,52]. The relationship between induced gamma oscillations and the processing of sensory stimuli indicate that these responses may not only be associated to the physical stimulus attributes, but also connected particularly to the subjectively weighted percept of a sensory event [7].

MyndPlay was initiated to provide brain training through entertainment using brainwave EEG technology. The EEG devise was designed to allow the viewer not only to have fun but to also develop control over their own emotions. This aimed to be a platform for alternative therapy by making mental training techniques available to a wider audience. The purpose was to create video simulations in which you progressively add controlled emotional, tension and stress through gaming mechanics. Gamma Oscillations elevated during motor imagery based on a video game. Parallel to this a further study suggested that Gamma Oscillations were significantly increased during high intensity events during game-play [53]. There is potential for EEG interfaces such as the MyndPlay device to influence attention and relaxation levels as a mechanism to manage chronic pain.

Whist this study has shown a significant correlation between gamma oscillations and PPT, there are limitations to the validity of the results. Due to sample restrictions within the student cohort the results cannot be representative of the general population. It is also of note that the majority of participants’ data was gathered during the exam period which may have affected cognitive processing and potentially increased gamma oscillations [33].

The Myndplay Brainband XL device has insufficient research on the reliability and accuracy and therefore is considered a limiting factor despite its flexibility for monitoring outside of a laboratory environment. Although the same treatment room was used, controlling the external environmental noise is a factor that should be considered as gamma activity has been shown to increase during auditory processing [54].

A symptomatic population would be recommended as well as collecting further baseline characteristics such as race, adherence to faith, exercise and a more in depth analysis of their meditation practice. A psychometric test to attempt to objectively measure aspects of mental ability would also be a useful tool to see if there is a correlation of gamma oscillations and PPT.

Development of long term studies looking at the effect of increasing gamma oscillation with participants that suffer with chronic pain is necessary [64-72]. Targeting gamma modification with a gaming strategy may offer a patient-centred alternative to the management of pain. This could be further explored through the use of online health communities and social networks in order to provide a platform for chronic pain sufferers to validate their experiences [72-82].

There is a statistically significant association between high gamma oscillations and PPT. This may represent a step forward in identifying a possible approach to influence pain via other neural mechanisms. Identifying that gamma oscillations may have an important role in PPT allows holistic therapies such as meditation, art, light and music therapy to have a scientific rationale behind their treatment as they all induce gamma oscillations. Strategies to manipulate gamma oscillations could be a fundamental process in assisting people in coping with chronic pain conditions.