The main aim of this system is to ensure secure communication between soldiers and the control station in the battlefield. The use of biometrics for authentication is becoming more and more mainstream [1]. Nowadays, various devices come fitted with fingerprint [2] or iris scanners used for identity verification. Another biometric feature [3-5], which is unique to every individual, is the heartbeat which can be measured with an electrocardiogram (ECG) [6-18]. Compared to other features, the human heartbeat is hard to falsify, since it naturally holds information about whether an individual is alive or dead. One disadvantage, when compared with other biometric features is the time needed for data acquisition. There are several physiological reasons why heartbeat differs with every human [19]. The first reason is the structure of the human heart which is unique to every person. The electrical conductivity of the cardiovascular cells, as well as muscle fibre orientation and the Purkinje System, are some major reasons why heartbeats differ for each individual. Apart from this, the location of the heart is also another cause for differences in the ECG patterns. Sex, age, height and the body habitus also play a role [20]. There are various approaches for isolating these differences. One approach involved identifying fiducial points [21] in a segmented heartbeat. Based on these fiducial points, differences in amplitude and time, as well as angles between those points can be computed which are believed to be unique for every individual and can, therefore be used as a feature for classification.

Wireless communication [23] devices are most widely used nowadays. Their use has grown much in residential and military sectors. Walkie-talkie [22] are used in the military for communication purpose among the soldiers, especially on their battlefield. Walkie-talkie is half-duplex devices which are used to communicate with soldiers to report their current status to the base and also to receive orders back from the base. It is very easy to handle which might become a problem if the device falls into the wrong hands. There is no possible way to find who is using the device. Anybody can get their hands on it and thus there is a high chance of the vital intelligence getting leaked.

One of the existing systems of the walkie-talkie used in the military is the Motorola’s GP338 plus walkie-talkie (Figure 1). The GP338 Plus offers a versatile two-way solution for professionals who need to stay in contact and require additional features. This practical radio can easily increase productivity by keeping soldiers communicating, yet streamlines their radio use-allowing them to concentrate on the job at hand. The GP338 Plus provides a maximum of 128 channels, an easy to read on-screen LCD display and uses MDC 1200 signalling. 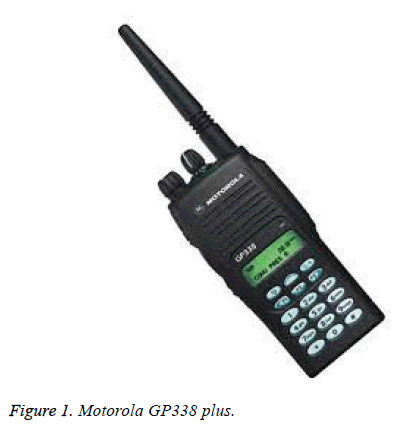 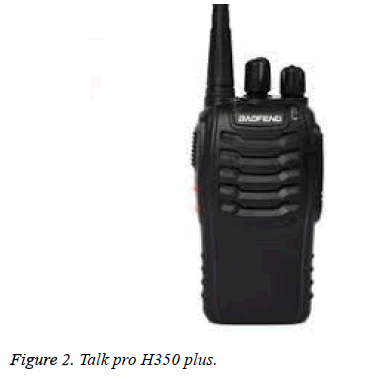 H350 plus walkie-talkie provides a maximum of 16 channels, with MDC 1200 signalling and IP67 MIL Standards. It also allows emergency transmit to all radios, wire clone and has a 5-tone signalling and siren. 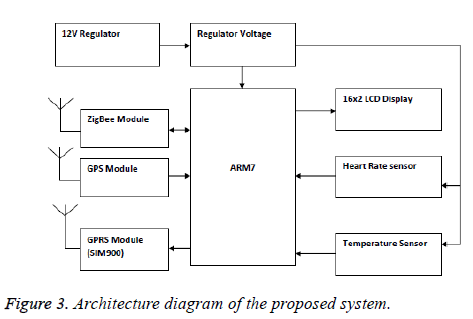 The walkie-talkie [22] is modified by including the abovementioned sensor. This sensor measures the heartbeat of the soldier and the result is compared with the digital file in the microcontroller which is also included in the walkie-talkie design (Figure 4). 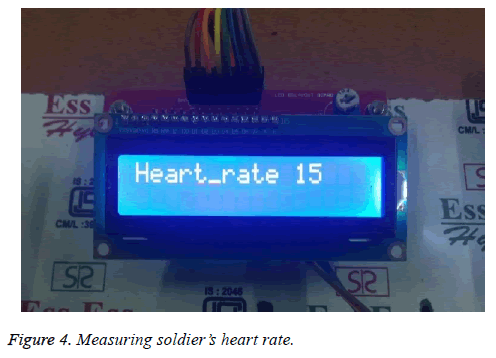 Trilateration is a sophisticated version of triangulation. Data from a single satellite pinpoints a position to a large area of the earth’s surface (Figure 5). Adding data from a second satellite narrows the position down to the region where the two spheres of satellite data overlap (Figure 6). Further, adding data from a third satellite provides a relatively accurate position, and all the GPS units require more than four satellites-enhances precision and determines accurate elevation or altitude (Figure 7). 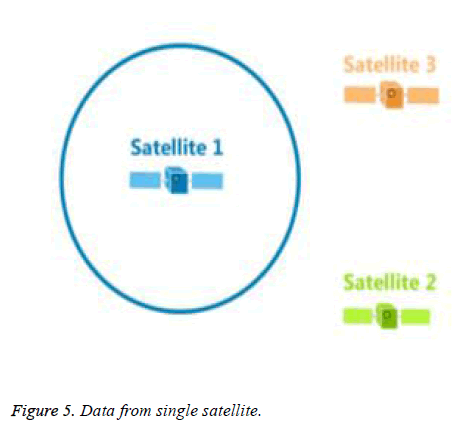 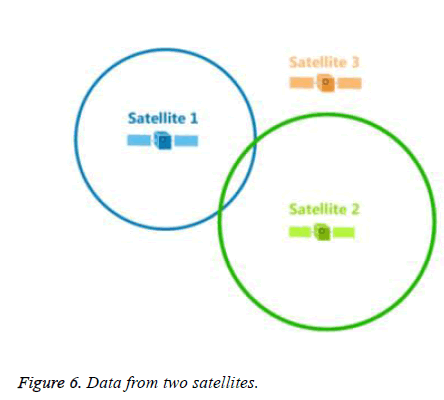 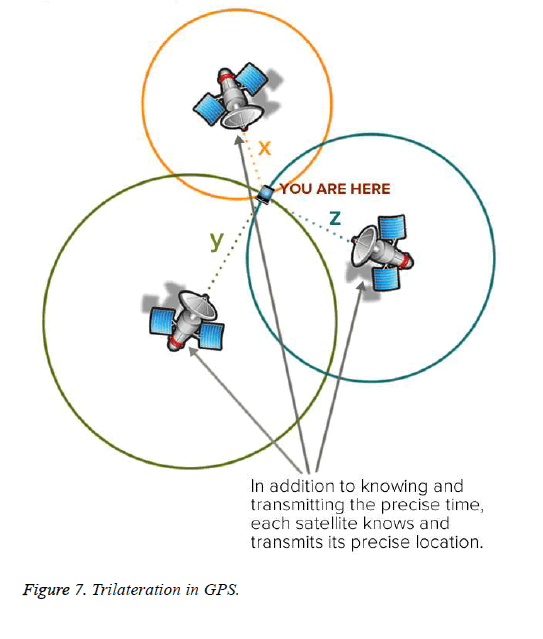 GPS receivers routinely track four to seven satellites or even more simultaneously and use trilateration to analyse the information.

The GPS calculation in the receiver uses four Equations 1-4, in the four unknowns x, y, z, tc. The four equations are,

tc=time correlation for the GPS 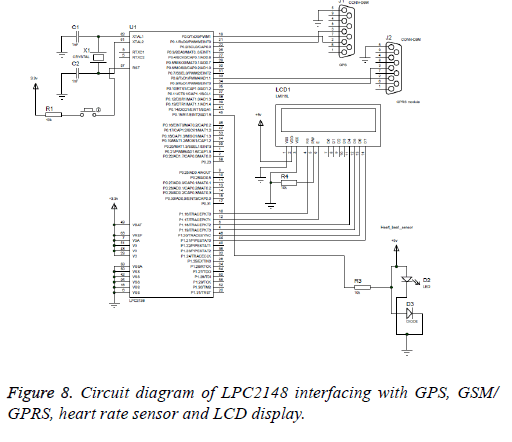 The microcontroller then broadcasts the data it received from the GPS and heart rate sensor to the GSM/GPRS module interfaced with it. The GSM/GPRS module then forwards the data to the server which can be accessed by the control station. The GSM/GPRS persists to send the data to the server every two minutes until the communication between the soldier and the control station lasts. The microcontroller also sends an alert to the troop head when the soldier’s heart rate status is abnormal which tells that the soldier is in danger. 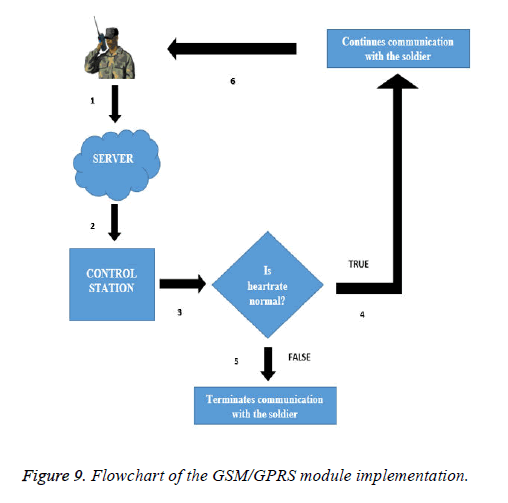 2. The control station checks the server for updates periodically.

3. From the updates, the control station decides based on the soldier’s heart rate status.

4. If the soldier’s heart rate status is normal the control station transmits the messages.

5. Suppose, if the soldier’s heart rate is not normal then the control station terminates the connection to that soldier and sends another nearest soldier for help.

6. Again the same process is repeated from step 1 through step 5. 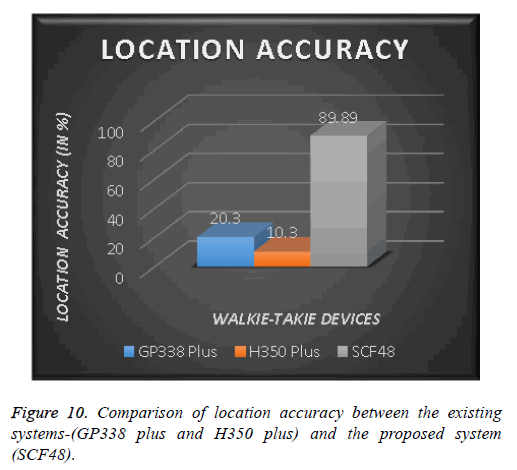 Figure 10: Comparison of location accuracy between the existing systems-(GP338 plus and H350 plus) and the proposed system (SCF48).

The graph clearly, shows that the proposed system has higher location accuracy than Motorola GP338 Plus and Talk Pro H350 Plus, as it has GPS embedded in it. 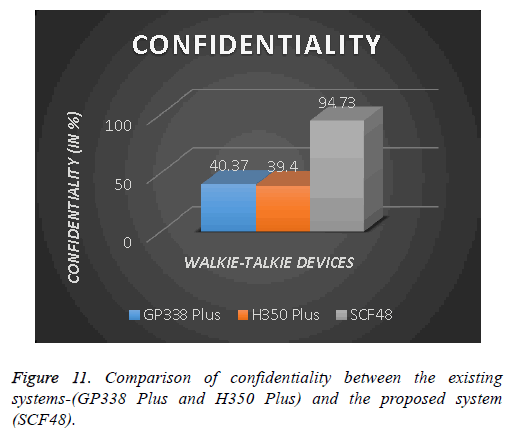 Figure 11: Comparison of confidentiality between the existing systems-(GP338 Plus and H350 Plus) and the proposed system (SCF48).

The modified walkie-talkie using GPS, GPRS and heart rate sensor on implementation hopes that the experimental results will result in the increased concealment among the messages transmitted between the soldiers and the control station during the warfare. In the case when the enemy outbreaks the soldier, he can’t receive the message broadcasted to the soldier from the control station, as the device is authenticated with the soldier’s heartbeat and the connection between the soldier and the base is terminated and an alert is sent to the crew head when the soldier’s heart rate status is abnormal. Also, the base station sends the nearby soldier to help the attacked soldier, using the location provided by GPS in the soldier’s device.

Therefore, this device is much more efficient and secure than the previously developed devices. They provide high security and ensure the distribution of vibrant data. Subsequently, this device is provided with GPS, the location of the soldiers is sent periodically to the base and the server is updated regularly. Thus, this model is anticipated to have great use in the military war field in the upcoming years.

The current system has already taken a leap further by identifying the soldier receiving the information by using their heartbeat rhythm as well as sending alert to the crew head in case of emergency. The future of this system if enhanced correctly a proper machine learning algorithm can be developed for analysing various soldier’s heart rhythm to avoid false positive results of the soldier’s status by enhancing the accuracy of the heart rhythm.

Further, the heart rate authentication can be used as biometric authentication for Soldiers, Captains, Majors, Lieutenants, Colonels, Brigadiers, Generals and other high ranks as well as low-rank officers in the military. This type of authentication helps in improving the standard of authentication provided and increases the security level of the army so that all the +confidential information is safeguarded.

This leads to the invention of a wide range of IoT based wireless devices and creates a pathway for further invention and discoveries. 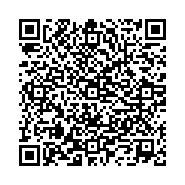