Introduction: Sarcoptes scabiei (S. scabiei) var. cuniculi is the cause of sarcoptic mange in rabbits and results in considerable loss of weight, productivity, and wool quality.

Methods: In the in vivo condition, the efficacies of 10% Propolis ointment, 1% ivermectin (400 μg/kg, S/C), and Propolis ointment in combination with ivermectin were evaluated. Serum factors of the control and treated groups were tested to evaluate the toxic effects of Propolis on the liver.

Conclusions: 10% Propolis ointment has antisarcoptic mange effects under in vivo conditions and may be used in clinical applications.

Mange is common in pet rabbits; it inhabits the epidermal layer of the skin and causes irritation, hypersensitivity reaction, inflammation, hyperkeratosis, seborrhoea, and alopecia as a result of the feeding behaviour of larvae and nymphs [1]. Mange lowers animal productivity and the quality of animal products and is often fatal if not treated [2]. S. scabiei var. cuniculi causes sarcoptic mange in rabbits. Infection with S. scabiei var. cuniculi induces relative protection against subsequent infection in rabbits [3]. Elimination of S. scabiei in rabbits is difficult compared to other domestic animals [4]. However treatment of sarcoptic mange with various acaricides like diazinon, deltamethrin, and ivermectin have achieved success [5], many of these chemical acaracides have side effects [6] such as resistance [7], toxicity [8], environmental contamination and persistence [8,9]. These limits have suggested a search for novel alternatives [10-13]. Propolis has lots of biological and pharmacological properties and its mechanisms of action have been widely investigated in vitro and in vivo in the last years. Propolis used as a popular remedies and is available in either pure or combined form with other natural products. Researchers have been focused on the study of its constituents and biological properties [14]. Propolis is used for upper respiratory tract infections, common cold and flu-like infections, and as dermatological preparations for wound healing [15]. Canine dermatophytosis resolved with topical propolis treatment [16]. Propolis is widely used in human and veterinary medicine as it has antimicrobial, antiviral, and antioxidant activities. The aim of the present study was to evaluate antisarcoptic mange activity of Propolis ointment under in vivo conditions.

Propolis samples were obtained by contact with beekeepers in different zones of Riyadh, Saudi Arabia. Each sample was weighed, frozen at -20°C, ground with a mortar, and then stored at 4°C until use [17].

Propolis extract was prepared as previously described [16] with modifications. Briefly, (5 g) was heated in a water bath with 50 g petroleum jelly (Vaseline) until melting and mixing. This mixture was used as the 10% propolis ointment for application twice/day to the skin lesion of each infested rabbit.

Forty one-year-old and 2-2.4 kg weight naturally infested rabbits, of both sexes (eleven male and twenty nine female) were obtained from markets with crustaceous lesions on nose, lips, ears, legs and surround the eyes. Infestation was identified by taking skin scraping samples with a scalpel blade and they were microscopically examined for mobility and morphology of the mites [18]. Ten healthy rabbits free from any infestations were purchased and used as negative control. Mortality was checked daily. The animals were kept in wire-bottomed cages in a room under standard conditions of illumination with a 12 hour light-dark cycle and at a temperature of 25 ± 1°C for one week until the beginning of treatment. Animals were provided with tap water and a balanced diet ad libitum. The animals were divided into 5 groups, with 10 mice in each group. The five groups were group I (negative control), group II (positive control), group III (infected and treated with 10% Propolis ointment twice/day), group IV (1% ivermectin sterile solution (JaamectinTM, Jaapharm Canada Inc.) in a dose of (400 μg/kg, S/C), two injections with two weeks interval) [19], group V (infected and treated with both propolis ointment and ivermectin). Weekly, skin scrapings were collected from infected and recovered areas from each animal and were examined microscopically during the course of the experiment to detect sarcoptic mite.

To assess the toxic effects of propolis in the livers of the rabbits, serum samples were collected from the rabbits. Alanine Aminotransferase (AST), Aspartate Aminotransferase (AST), and Alkaline Phosphatase (ALP) were measured [19] using commercial kits (Roche) with a Reflotron® Plussy system machine (Roche, Mannheim, Germany) as well as serum cortisol levels [20] using commercial, coated tube radioimmunoassay kits (Pantex, Santa Monica, CA), and the results were statistically analysed for assessment before and after treatment.

Tissue samples were fixed in 10% neutral formalin for 24 hours, and paraffin blocks were obtained and routinely processed for light microscopy. Slices of 4-5 μM thickness were obtained from the prepared blocks and stained with haematoxylin-eosin. The preparations were visualized using a Nikon microscope at a magnification of x400 [21].

Specimens of parasites were collected from skin lesions scraping in tubes, and fixed in (2.5%) buffered glutaraldehyde overnight at 4°C. The tubes were checked frequently, and then centrifuged for 5 min at 1500 rpm. The supernatant was removed, and the specimens were fixed in (1%) osmium tetroxide in the same buffer for one hour at 4°C. Dehydration was carried out in graded series of acetone from (30-100%). Specimens were dried at a critical point-drying apparatus, mounted on stubs and were coated with gold according to standard procedures [22]. The prepared specimens were examined by Zeiss DSM 940 electron microscope in the Electron Microscope Unite of King Saud University.

Data are presented as the means and standard errors of the mean or standard deviations using the Statistical Package for the Social Sciences (SPSS v.22, Chicago, IL, USA). The results are expressed as the means ± Standard Errors of the Mean (SEM). All statistical comparisons between the control and the treated groups were performed using One-Way Analysis of Variance (ANOVA) followed by Dunnett’s post-hoc test for multiple comparisons. Significance was assigned at the level of (P<0.05) [23]. Receiver Operating Characteristics (ROC) curve analysis was performed. Area Under the Curve (AUC), cut-off values, and degree of specificity and sensitivity were calculated.

The healing from clinical signs was observed after 7 days of treatment by 10% propolis ointment either alone (Figures 1a and 1b) or in combination with ivermectin (Figures 1c and 1d). Itching, scale formation, and anxiety were vanished. Moreover, smooth skin and new hair growth were observed after 15 days of treatment. Recovery was late till the 28th day of the experiment in ivermectin-treated group (Table 1). Untreated control rabbits exhibited signs of sarcoptic mange throughout the study (Figure 1e). Seven days post treatment; skin scrapings from group III and group V were contained dead mites. Fifteen days post treatment; the skin scrapings were negative for the presence of eggs, larvae and adult parasites. In group IV, dead mites were found in the microscopic examination until the end of the 28th day and eggs of sarcoptic mite were detected in scraping at the end of the experiment (Figure 1f). 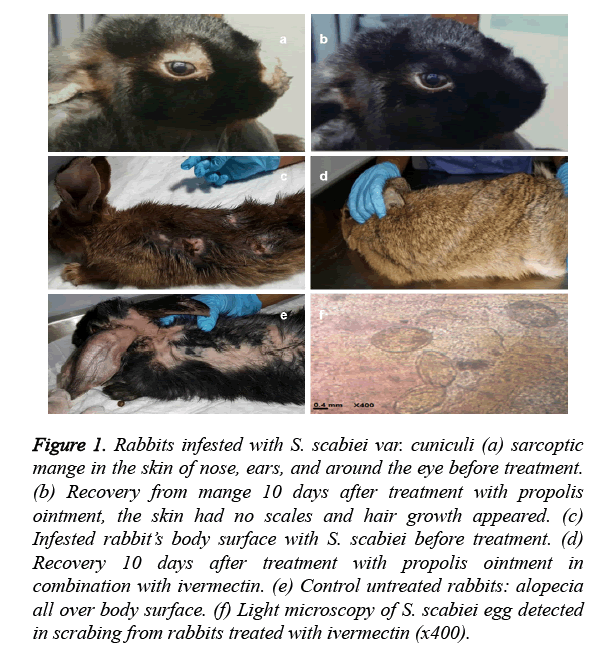 Figure 1. Rabbits infested with S. scabiei var. cuniculi (a) sarcoptic mange in the skin of nose, ears, and around the eye before treatment. (b) Recovery from mange 10 days after treatment with propolis ointment, the skin had no scales and hair growth appeared. (c) Infested rabbit’s body surface with S. scabiei before treatment. (d) Recovery 10 days after treatment with propolis ointment in combination with ivermectin. (e) Control untreated rabbits: alopecia all over body surface. (f) Light microscopy of S. scabiei egg detected in scrabing from rabbits treated with ivermectin (x400). 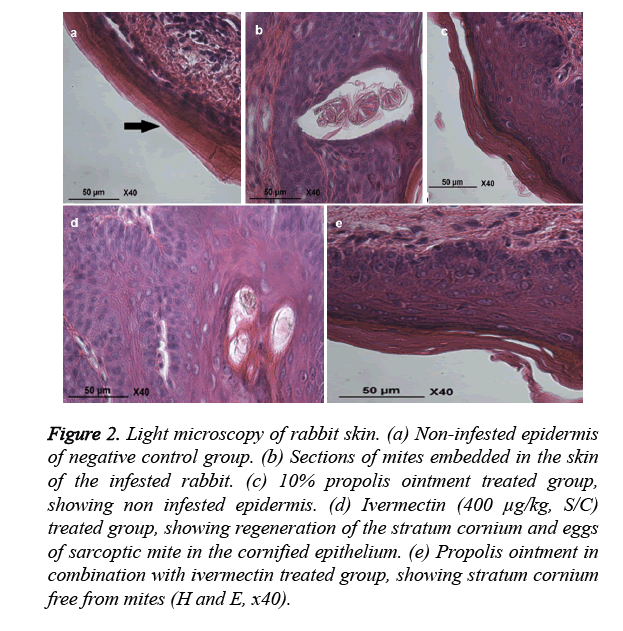 The skin of group I showed numerous cracks of mite penetration (white arrow) (Figure 3a) in the epidermis and embedded mites in the keratinized layer (Figure 3b). Group II showed completely formed stratum cornium (Figure 3c). 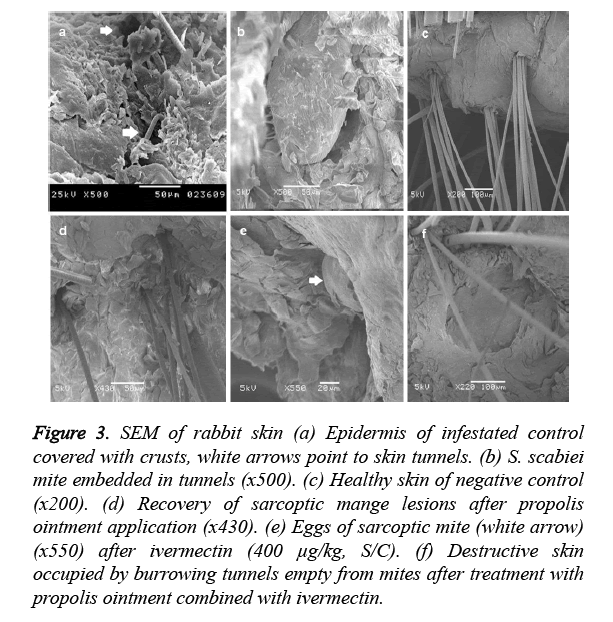 The drugs currently used for sarcoptic mange possess several limitations, such as the development of resistance [7], toxicity [8], and management difficulties increasing the need for safer and more effective drugs. Further studies on the treatment of sarcoptic mange with natural and herbal elements are needed. Topical application of 10% propolis ointment indicated that using this compound on S. scabiei effectively killed the mites. Complete recovery was observed 15 days after treatment. However, in ivermectin (400 μg/kg, S/C) treated rabbits recovery was observed at the end of the experiment. Our result of treatment success was formerly applied by [13,24,25] who registered the same factors in treatment of mange in rabbits but by using oils.

Pathological investigation revealed infiltration of inflammatory cells in epidermis and dermis and cross sections of embedded mites similar to those previously described in wild mammals [26], rabbits [3,27], and in sheep [28]. The histological structure of the epidermal and dermal layers was normal at the 2nd week of treatment with 10% propolis ointment. Skin sections from ivermectin-treated group showed slow improvement and somewhere few inflammatory cells and eggs were observed at the end of the experiment.

SEM of the skin samples taken from the 10% propolis-treated group revealed improvement in stratum cornium. This may be due the keratolytic effect of propolis. Similar result was recorded in ivermectin-treated group in addition to detection of S. scabiei eggs. Oppositely, the SEM image in the skin of positive control-group rabbits revealed adult mites and eggs in tunnels. These findings were similar to those reported by other investigators [29,30].

High values of specificity, sensitivity and Area Under the Curve (AUC) measured by ROC analysis suggested that the studied biomarkers could be used as predictive tools in testing the side effects of ivermectin and the potency of 10% propolis ointment in treating mange in rabbits. Among the measured parameters ALP, AST, ALT, and cortisol markers were the most predictive recording high specificity and sensitivity and AUC of almost 1.

Collectively, the results of this study demonstrated that propolis displays an antisarcoptic effect under in vivo conditions. Various concentrations and application methods of propolis are required to further examine the effectiveness of propolis in the treatment and healing of sarcoptic mange lesions. We recommend future molecular studies to further examine the apoptotic pathway of this molecule.

This research project was supported by a grant from the research center of the Center for Female Scientific and Medical Colleges in King Saud University.