Background: Natural Killer (NK) cells are lymphocytes that have a spontaneous cytotoxic activity to recognize and eliminate malignantly transformed cells through early defense against tumors. We aimed to investigate the association between NK cell activity and tumor characteristics, especially in TNM stage, in patients with breast cancer.

Methods: This was a single-center retrospective study. Newly diagnosed breast cancer patients from July 2015 to December 2019 were analyzed. Cytotoxic activity of NK cells was determined using the NK Vue-Kit® (ATgen, Sungnam, Korea) which estimated the level of Interferon-Gamma (IFN-γ) released from NK cells. We transformed IFN-γ levels into natural logs (lnIFN-γ) and analyzed them.

The immune system is an interactive defense network of cells and proteins which enable the host to recognize, repel, and eradicate pathogens and other foreign molecules. Thus, the immune system protects our body against infectious diseases and maintains system integrity.

NK cells are a type of cytotoxic lymphocyte critical to the innate immune system and are classified as group 1 Innate Lymphoid Cells (ILCs) [1]. NK cells recognize and lyse malignant transformed and virus-infected cells through early defense against tumors and infections [2]. Without Major Histocompatibility Complex (MHC) restriction or prior sensitization, NK cells can eliminate target cells with malignant transformation or intracellular microbe infection [3]. NK cells are activated by the binding of NK cell-activating receptors with activating ligands and also activated by proinflammatory cytokines such as Interleukin (IL)-2, IL-12, IL-15, and IL-18 [3,4]. Activated NK cells directly lyses target cells by releasing perforin and various granzymes and also produce cytokines such as Interferon (IFN)-γ which is a major cytokine to exert immune responses against cancer cells and virus-infected cells.

Breast cancer is the most common malignancy in women around the world. Although mortality has been reduced due to emerging new treatment strategies, breast cancer is still the most common cause of death from malignancy. The molecular subtypes of breast cancer depend on the Hormone Receptor (HR) and Human Epidermal Growth Factor Receptor 2 (HER2) status. The importance of these biological factors increases as the therapeutic strategy depends more on the subtype than the severity of the disease. In the revised eighth edition of the American Joint Committee on Cancer (AJCC) Cancer Staging Manual, demonstrated the importance of biological factors by including a new prognostic staging system.

In the last few decades, numerous studies have been conducted on NK cells or immunotherapy and revealed evidence that immune response has a significant role in oncologic outcomes. Previously, few reports have been made on the relationship between NK cell Activity (NKA) and breast cancer. In this study, we aimed to investigate the association between NKA and tumor characteristics, especially in TNM stage, in patients with breast cancer.

This was a single-center retrospective study. Medical records of patients who were newly diagnosed with breast cancer, either ductal carcinoma in situ or invasive breast cancer, from July 2015 to December 2019 were collected. Patients of all stages, including de novo stage IV patients, were included. However, patients with a previous history of any malignancy, history of chemotherapy or radiotherapy, immuno compromised state, or infected state with any virus or bacteria were excluded. A chart review was performed to collect demographic data and tumor characteristics, such as invasion of basement membrane, histologic grade, tumor size, regional lymph node metastasis, distant metastasis, estrogen and progesterone receptor (ER and PgR) status, and HER2 status.

The breast cancer stage was classified from stage 0 to stage 4 according to the 8th AJCC Cancer Staging Manual. We adopted the breast cancer subtyping classification according to St. Gallen International Expert Consensus [5]: patients were categorized as luminal A (ER+ and/or PgR+, HER2- and Ki-67 low), luminal B (ER+ and/or PgR+, HER2- and Ki-67 high), luminal B-HER2 positive (ER and/or PgR+, HER2+, any Ki-67), HER2-positive (ER- and PgR- and HER2+) and triple-negative (ER- and PgR- and HER2-).

This study was approved by the institutional review board of ooo (IRB no. 2021-02-015). The need for informed consent was waived.

Cytotoxic activity of NK cells was determined using the NK Vue-Kit® (ATgen, Sungnam, Korea) which estimated the level of IFN-γ released from NK cells. Whole blood was collected using BD Vacutainer® heparinN1 tubes after diagnosis of breast cancer. 1 ml of whole blood was incubated for 24 hrs, at 37°C, under 5% CO2 with the indicated dose of Promoca® and 1 ml of RPMI 1640 media. Cell-free supernatants were harvested, and IFN-γ levels were determined according to the manufacturer’s protocols. The results were reported as values between 40 to 2000 pg/ml. IFN-γ levels over 250 pg/ml were considered normal NKA. 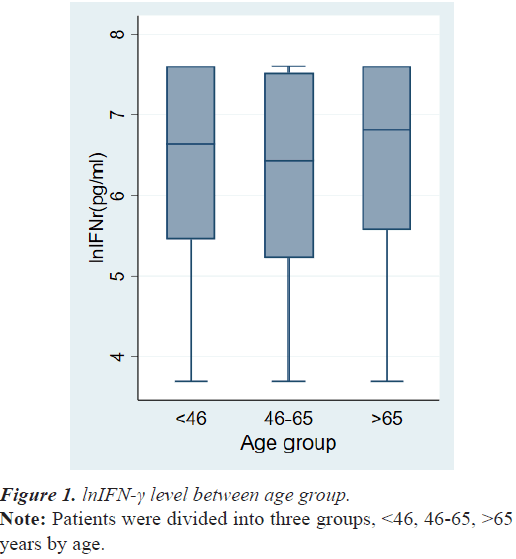 Table 2. Analysis of lnIFN- γ according to various patients and tumor related variables. 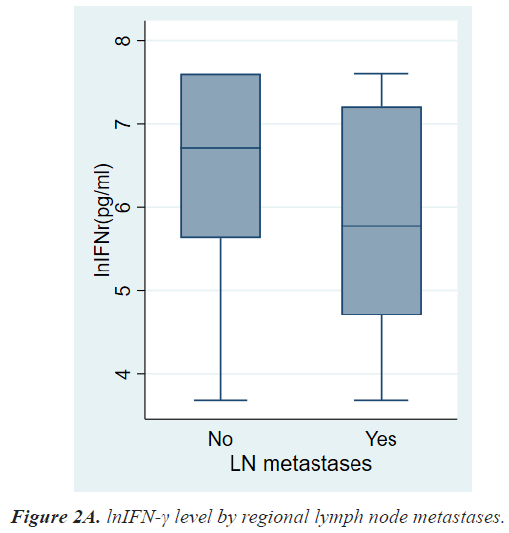 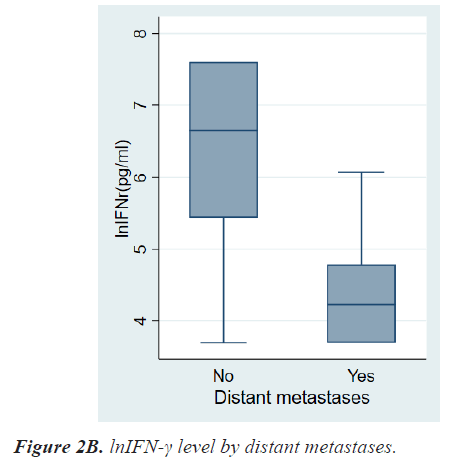 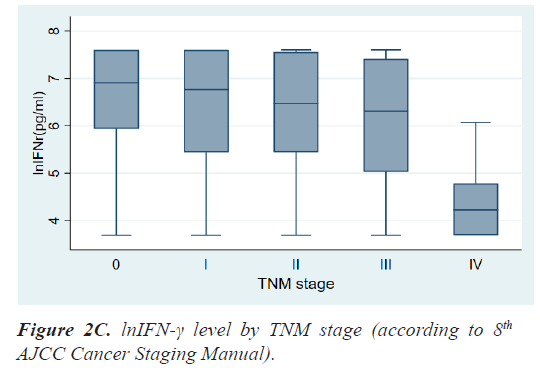 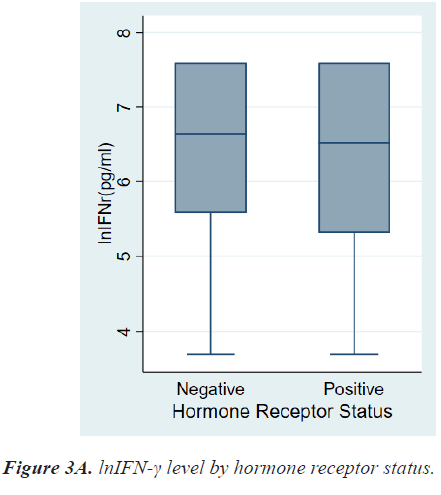 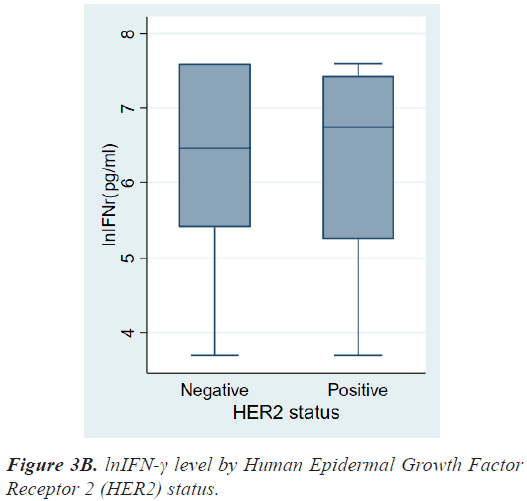 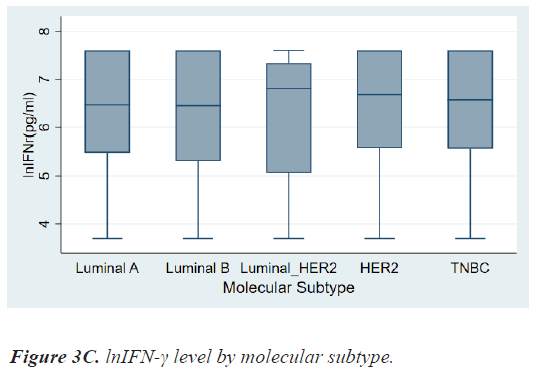 The importance of NK Cells and their association with cancer has been widely documented since early 1980. Through many reports, it is proved that the activity of NK cells controls the antitumor immunity rather than the number of NK cells.

Breast cancer has not traditionally been thought of as highly immunogenic compared to melanoma and nonsmall cell lung carcinoma which have the highest somatic mutational load of all human malignancies [6,7]. However, this study demonstrated that lnIFN-γ level of patients with more progressed breast cancer–LN metastases, distant metastases, advanced stage–was significantly lower than those of relatively less progressed breast cancer. lnIFN-γ levels showed no difference between Ductal Carcinoma In Situ (DCIS) and invasive carcinoma. It could be inferred that NKA is influenced by the regional or systemic spread of tumor cells such as LN metastases or distant metastases rather than local tumor growth. As it is been reported that various immunosuppressive factors produced by macrophages, T lymphocytes, and tumor cells lead to dysfunction of NK cells [8,9].

On the contrary, patients with HER2+ breast cancer had a higher level of lnIFN-γ than those with HER2- breast cancer, although there was also no significant statistical difference (6.75, 3.69-7.60 vs. 6.46, 3.69-7.60 pg/ml, P=0.8976). As a result, lnIFN-γ level of patients with HER2+ cancer was higher than those of Luminal A, however, there was no statistical difference among molecular subtypes.

This study had several limitations. First, it included a relatively small number of patients (N=268), especially the stage 4 patients (n=9). However, the distribution of patients by TNM stage in our study was similar to that of the National Cancer Registry in our country. Second, our study failed to show the statistical differences of lnIFN-γ level by HR status and HER2 status. It seemed to be influenced by sample size, therefore the results might be changed if more patients will be included. However, this study is meaningful because we obtained the results of an inverse association between lnIFN-γ level and TNM stage, especially stage IV.

In conclusion, as the breast cancer stage increases, the level of lnIFN-γ decreases. It is assumed that IFN-γ released from NK cells decreases as cancer progresses. Further studies are needed to analyze the difference of loco-regional recurrence or distant metastasis between the patients with higher IFN-γ level and those with lower IFN-γ level. We suggest that measurement of IFN-γ level released from NK cells can be a useful method of surveillance for breast cancer patients.

The authors do not have any conflicts of interest to declare.

This work was supported by a grant from research year of Inje University in 2017 (subject number 20170092).