Methods: The PEG-5-FU-MAMS were prepared by emulsification/solidification method. The cultured LoVo cells were divided into four groups. Group A was PEG-5-FU-MAMS combined with external magnetic fields; group B was pure PEG-5-FU-MAMS without magnetic fields; group C was free 5- fluorouracil (5-FU); group D was pure magnet. The growth of LoVo cells were observed under an inverted microscopy and the inhibitory rate (IR) was assayed by methyl thiazol tetrazolium (MTT) assay.

Currently, chemotherapy for colon cancer is mostly based on 5- (5-FU) based chemotherapy, but its half-life in vivo is short and the removal rate is rapid, and the effective blood concentration cannot be maintained in vivo. Pegylated 5-fluorouracil magnetic albumin microspheres (PEG-5-FU-MAMS) with high load capacity, better magnetic response and sustained release, opens up a new route of administration to the tumor targeted therapy [1]. With the development of tumor targeted therapy and magnetic biology, the progress of using anticancer drugs combined with magnetic field to treat tumor has been improved recently [2,3]. Studies have shown that the magnetic field can affect the viability and differentiation of most cells in varying degrees, but the specific proliferative effects are reported differently. This experiment used methyl thiazol tetrazolium (MTT) assay to observe the inhibitory effect and mechanism of PEG-5-FU-MAMS combined with external magnetic fields on LoVo colon cancer cells in vitro, in order to provide a new way for the treatment of colon cancer.

According to [1], using emulsified curing method, pegylated 5- fluorouracil magnetic albumin microspheres (PEG-5-FUMAMS) were prepared as follows: 250 mg BSA, 50 mg PEG, 50 mg 5-Fu and 150 mg magnetic fluid were added to 1.5 ml of distilled water. The resulted dispersion was then added dropwise (20 drops/min) into 100 ml of vegetable oil with continuously stirring for 30 min. The resultant emulsion was then denatured by being heated to 160°C for 20 min. The suspension was then cooled to 25°C, washed three times with ether and three times with distilled water. The washed MS were freeze-dried for further experiment; the morphology and particle size were characterized by scanning electron microscopy and Malvern particle size analyzer; alkali digestion at 265 nm wavelength was determined by calculation of loading; dissolved in 0, 5, 10, 20, 30, 40, 60, 90 min measured the absorbance and study its stability and magnetic response; experimental study on sustained release microspheres drug release in vitro. Characterization of PEG-5-FU-MAMS as following: the average diameter of microspheres is (1.32 ± 0.50 μm), which is spherical and has a smooth surface (Figure 1). The drug loading was (5.31% ± 0.13%); had better magnetic response (Figure 2); the release rate of 0.5 h was (28.50% ± 0.66%); the release rate of 24 h was (46.93% ± 2.83%). 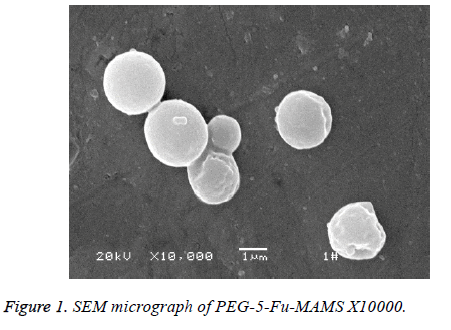 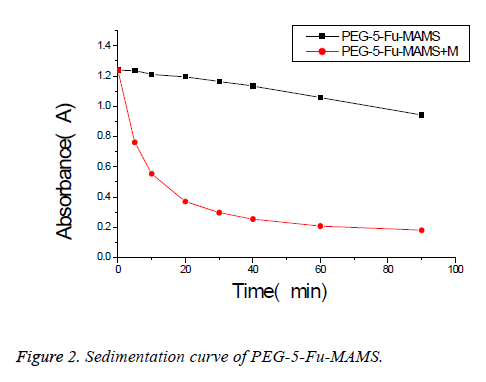 This experiment used methyl thiazol tetrazolium (MTT) assay to observe the inhibitory effect and mechanism of PEG-5-FUMAMS combined with external magnetic fields on LoVo colon cancer cells in vitro. The cultured LoVo cells were divided into four groups. Group A was PEG-5-FU-MAMS combined with external magnetic fields; group B was pure PEG-5-FU-MAMS without magnetic fields; group C was free 5- fluorouracil (5- FU); group D was pure magnet. Referring to the 5-FU plasma peak level of 10 mg/L, each group contained 7 different concentration and microspheres reserved with 5-FU concentration of 1, 2, 5, 10, 20, 50.0, 100.0 mg/L; each condition was repeated with 3 holes. The growth and morphological changes of LoVo cells were observed under an inverted microscopy and the inhibitory rate (IR) was determined by MTT. IR (%)=(1-(OD value of experimental group-OD value of blank zero adjustment hole/OD value of control group-OD value of blank zero adjustment hole)) × 100%; IR>50% said the drug sensitive. IR>50% said the drug sensitive.

The package was analysed by SPSS 13 software, quantitative data with x̄ ± s, analysis of variance between the 3 groups, the overall average difference, further 22 compared with Q test, the difference was statistically significant P<0.05.

When the concentration of 5-FU was 20 mg/L, after culture of 24 h, 48 h, 72 h and 96 h, the results showed that the cytotoxicity of PEG-5-FU-MAMS combined with magnetic field on LoVo cells increased gradually with the prolongation of action time, and the inhibition was time-dependent within 96 h. The inhibitory effect of pure PEG-5-Fu-MAMS group and free 5-Fu group on LoVo cells reached the peak at 72 h and did not increase significantly after 96 h (Figure 3). 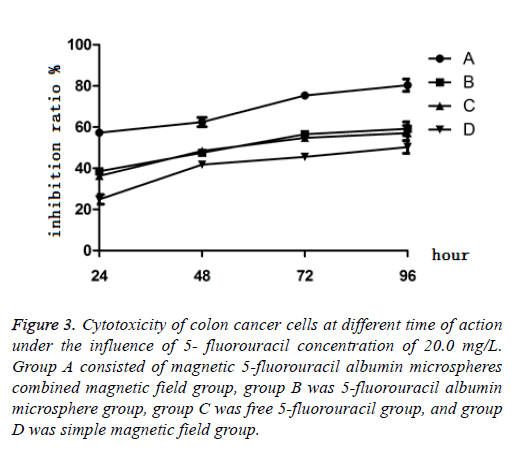 The traditional anti-tumor drugs are treated by various routes, and the blood serum concentration is distributed in the whole body to produce therapeutic effect. The biggest disadvantage of this treatment is lack of selectivity, which often results in severe side effects, and thereby affecting the therapeutic value of these drugs [4]. In order to overcome the disadvantages of traditional medicine on these problems, people put forward a number of targeted drug delivery method, which the medicine package to the magnetic nanoparticles and then controlled by external conditions, effectively achieve the purpose of particle transfer, in vivo aggregation, of disease areas targeted therapy as a method [5,6].

This study found that: the magnetic field group had no obvious effect on the growth of LoVo cells; the IR of pure PEG-5-FUMAMS and free 5-FU at same drug concentration was similar, while PEG-5-Fu-MAMS combined with magnetic field group was significantly increased. The result indicates that magnetic microsphere preparation method and dosage form change had no influence on its pharmacological effect. It also showed that the cytotoxicity to LoVo cells increased with the increase of drug concentration, and the inhibitory effect increased with the prolongation of action time within 96 h after PEG-5-Fu- MAMS combined with magnetic field. There was a double dose and time dependence. The combination of the two methods has obvious synergistic killing effect. The mechanism may be due to: (1) Under the action of magnetic field intensity and gradient, magnetic drug-loaded microspheres aggregate in large quantities to form drug storehouse, and local drug concentration increases [7,8]. (2) In a certain period of time, the sustained-release of chemotherapeutic drugs carried by magnetic drug-loaded microspheres can further kill residual cancer cells, making tumor treatment more thoroughly [9]. (3) At the stage of DNA synthesis of tumor cells , when the external magnetic field is applied, the newly synthesized DNA strands which are in a loose state are changed due to the interference of magnetic field, which is more conducive to the killing effect of 5-Fu with DNA as the target [9]. (4) The magnetic field penetrates the cell membrane. Under the action of magnetic field, the trajectory of charged ions on the membrane surface is restrained due to Lorentz force, which leads to the abnormal movement and transmission of electrons and ions on the membrane of tumor cells, resulting in the change of the microstructure of the membrane of tumor cells, thereby affecting the trajectory. The permeability and orderliness of cell membrane [10] provided conditions for faster and more penetration of chemotherapeutics molecules into cell membrane, which may be one of the reasons that magnetic field combined with magnetic chemotherapeutic drugs can significantly improve its tumor inhibition effect. Its specific mechanism needs further study.

Thanks General Surgery Institute of Tianjin Medical University for providing LoVo cells, a human colon cancer cell line. The authors thank all study-site staff and participating consultants for their contributions, which made this study possible.

The datasets used and analysed during the current study are available from the corresponding author on reasonable request.

JL, ZL and KW declare that they have no competing interest.