Citation: Yavisheva TM, Shcherbakov SD. Carcinogenesis from the viewpoint of the work of the morphofunctional zones and aging. J Aging Geriatr Psychiatry. 2017;1(2):1-10

Albinism seen in very young seedlings from seeds infected with Alternaria fungi and that seen in variegated leaves is known in Citrus. However, genetic control of albinism has not been reported in Citrus accessions probably because of their apomixis, self-incompatibility, long generation time and cross breeding. In the present study, albino seedlings were observed for the first time in the zygotic seedlings obtained from the crosses or backcrosses with grapefruit and Hanayu with the segregation ratio of 1 albino:3 green and 1 albino:7 green. The 1:3 ratio indicated that Hanayu and grapefruit have independent single recessive gene for the albino seedlings. The albino genes detected in Hanayu and grapefruit designated al1 and al2 respectively. On the other hand, the 1:7 ratio indicated that Hanayu or Yuzu has independent single dominant gene designating R2 a green-restorer for restoration of genetic albinism in the crosses with grapefruit. Albinism observed in the seedlings showed the stability in terms of the two albino genes and all the albino seedlings showing slow growth died several months after seed germination. When grapefruit (pummelo×sweet orange?) was crossed to 46 monoembryonic Citrus accessions including 28 pummelo accessions, albino seedlings did not segregate in the progenies of all crosses. The albino seedlings found in this study may be useful as markers in various experiments and contribute to chloroplast research in Citrus.

Citrus is one of the most important commercial and nutritional fruit crops in the world, and thus, molecular genetic analysis are in great progress [1]. However, genetic analysis of traits governed by recessive genes is especially difficult in Citrus accessions because of their apomixis, self-incompatibility, long generation time and cross breeding [2]. In the studies for self-incompatibility [3], male sterility [4] and parthenocarpy [5] in Citrus accessions, we carried out more than hundred self-pollinations, crosses and backcrosses to find out their inheritance. During this study, we happened to find out albino seedlings from self-pollination of Hanayu (Citrus hanaju hort. ex Shirai) and grapefruit (C. paradisi Macf.).

In Satsuma mandarin (C. unshiu Marcow.), variegated shoots with a white over green periclinal chimera structure occurred in the trees with a frequency of 10 shoots /1 ha /20 years. The variegated shoots with albinism in their germ layer 2 were also seen in many groups of Citrus plants such as citron, pummelo, calamondin, lemon, sweet orange and sour orange as well as trifoliate orange (Poncirus trifoliata (L.) Raf.) and kumquat (Fortunella spp.) [2]. Some of these variegated Citrus accessions are valuable as ornamental plants. Albino nucellar seedlings were steadily produced from polyembryonic seeds of these variegated accessions with white over green structure. However, one albino seedling steadily appeared with a certain rate in a polyembryonic seed of self-pollinated Hanayu, suggesting that albino seedling formation was not due to fungi infection that reported in Citrus seeds [6].

Plant materials used were about 30-year-old trees of Hanayu, ‘Foster Pink’ grapefruit, ‘Mash seedless’ grapefruit, ‘Variegated Daidai’ sour orange (C. aurantium L.), ‘Variegated Buddha’s Hand’ citron (C. medica L.). During our previous studies for inheritance of male sterility and parthenocarpy [4,5], we conducted various crosses and backcrosses from which the seedlings with various age were produced. From these hybrid seedlings, we selected monoembryonic materials useful for genetic analysis in the present study. The monoembryonic hybrids between Hanayu and Yuzu (C. junos Sieb. ex Tanaka) and those between Hanayu-Yuzu hybrids and grapefruit were about 10-year-old trees. Forty-six monoembryonic Citrus accessions containing 28 pummelos, 11 pummelo-relatives, four yuzu-relatives and three mandarin-relatives used for crosses with grapefruit were 20- to 30-year-old trees of the 28 pummelo accessions, 15 were collected from more than 100-year-old trees grown in southwest Japan while 13 were introduced from National Institute for Fruit Tree Science (NIFTS) and Kagoshima Prefectural Fruit Tree Experimental Station in Japan. These accessions were grown in the Experimental Farm of Kyushu University, Fukuoka, Japan.

Thirteen accessions including polyembryonic Hanayu, Yuzu, ‘Variegated Daidai’, seedless ‘Variegated Buddha’s Hand’ and nine monoembryonic Hanayu hybrids were hand-pollinated with/to Hanayu. Pollination was made in May of 2008 to 2016 with at least three replicates in each cross. The flower buds one day before anthesis were emasculated, hand-pollinated with pollen of target accessions, bagged to prevent pollination with alien pollen, and harvested in November of the year.

As a control for genetic albinism in this research, open pollinated sour orange seeds were collected in November and sown in soil without disinfection and albinism in the infected seedlings were observed.

Segregation rates for albino seedlings were calculated and Chi- square test was performed to determine the probability.

Sour orange seedlings grown in disinfected soil showed various degree of albinism and root development (Figure 1). In comparison to this non-genetic albinism, genetic albinism seen in zygotic seedlings was stable in morphology, i.e., white leaf color, white stem color, white cotyledon color, seedling high and root development (Figures 2 and 3). In comparison to the green zygotic seedlings in each cross, albino zygotic seedlings were small in height, leaf size, cotyledon size and root size (Figures 2 and 3). There was no year-to-year variation for the morphology of albino seedlings, and they did not turn green during their growth period and died several months after germination. 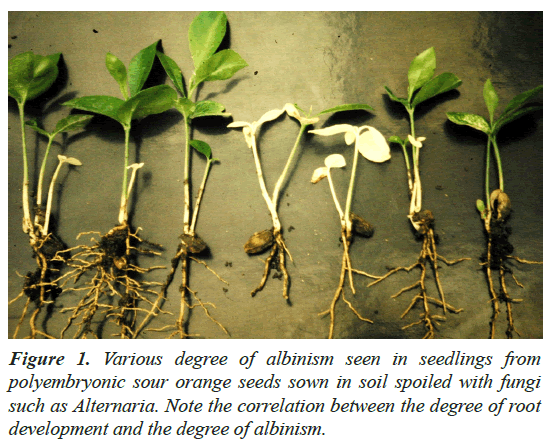 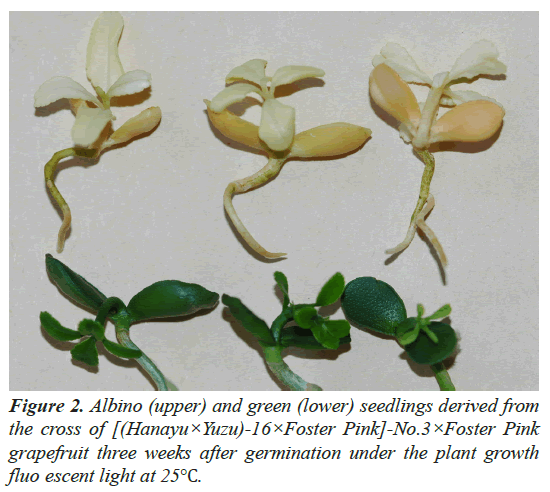 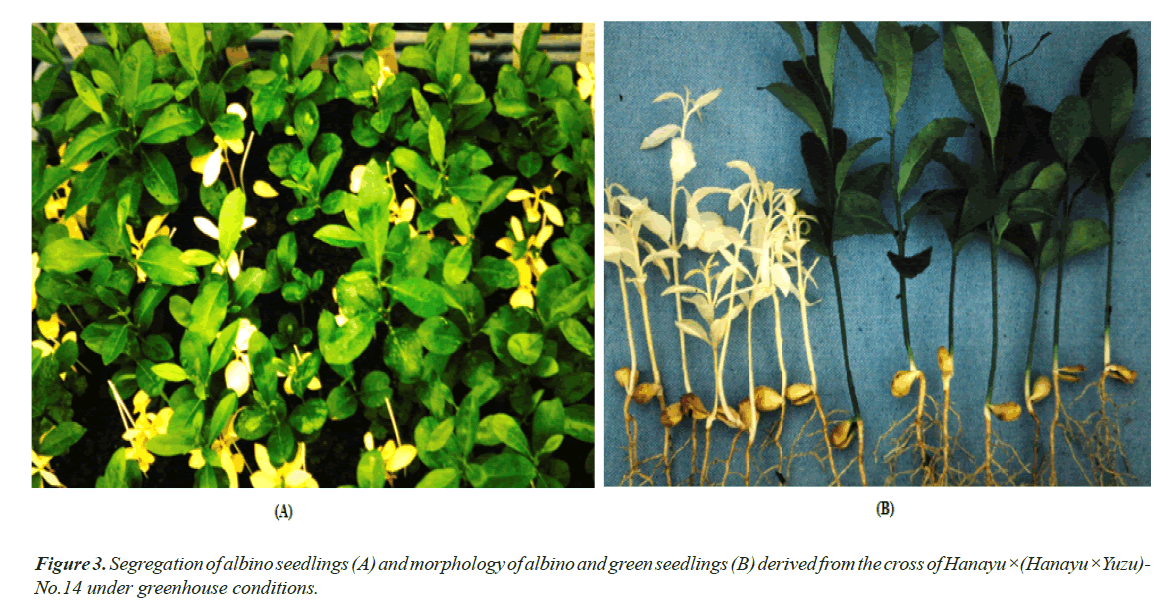 Figure 3: Segregation of albino seedlings (A) and morphology of albino and green seedlings (B) derived from the cross of Hanayu×(Hanayu×Yuzu)- No.14 under greenhouse conditions.

Segregation of albino seedlings in the crosses with Hanayu

Segregation of albino seedlings in the crosses with grapefruit

Table 2. Segregation of albino seedlings in crosses and backcrosses with grapefruit, and genotypes for albino genes al1 and al2 and green restoration gene R2 for al2.

In the pollination with ‘Foster Pink’ grapefruit as a pollen parent, no segregation of albino seedlings was observed in 45 monoembryonic Citrus accessions including 28 pummelos, 11 pummelo hybrids, four Yuzu relatives and three mandarins.

The present study in Citrus crop also shows that albinism is restored by a green-restorer gene on at least one locus. In the backcrosses with grapefruit, the albino seedlings and green seedlings segregated in a ratio of 1:7. This indicates that the genetic albinism is restored by single dominant gene designated R2. The nuclear gene R2 consists of functional allele R2 + and nonfunctional allele R2 −. It is estimated that either Hanayu or Yuzu has allele R2 +. Since no clear difference in morphology and growth rate was found between albino seedlings as to al1 and al2 genes, their function to generate albino seedlings seems to be similar.

It seems that the genetic albinism of a given Citrus genotypes is a stable trait governed by one or more recessive nuclear genes. The albinism is not affected by environmental conditions and seedling age after seed germination, but recovered by greenrestorers. Some Citrus accessions with relation to grapefruit and Hanayu carry these genes. These accessions will be very useful materials for producing markers in experiments such as micrografting, breeding and chloroplast research in Citrus.

This study was partially supported by a Grant in Aid (KAKENHI No. 18380026) from the Japan Society for the Promotion of Science (JSPS).