The aim of the study was to evaluate the status and diagnostic utility of PON1as indicator of antioxidant status in preeclampsia. Study groups involved cases, women with preeclampsia (BP >140/90mmHg, edema and proteinuria) (n=30) and controls, pregnant women without preeclampsia or any other complications attending hospital for antenatal checkup (n=30). Both cases and control groups were not on any vitamin E/ vitamin C supplementation. Fast-ing venous samples of blood were collected from both cases and controls. Serum PON1 and serum malondialdehyde (MDA) levels were measured spectrophotometrically. Students in-dependent‘t’ test and Pearsons correlation were used for statistical analysis. We found that PON1 activity in preeclampsia cases were significantly lower than in normal pregnancy con-trols while MDA levels were significantly higher. Conclusion: Our Study showed that the in-crease in Oxidative stress in preeclampsia cases is associated with a decrease in PON1 anti-oxidant activity.

Human serum Paraoxonase (PON1) is an enzyme bound to high density lipoprotein (HDL) that hydrolyses oxi-dized phospholipids and inhibits low density lipoprotein (LDL) oxidation. It is the major determinant of antioxi-dant action of HDL.Oxidative stress has been implicated in the pathogenesis of several complication of human pregnancy including preeclampsia. Preeclampsia is a pregnancy specific disorder and its etiopathogenesis is complex and incompletely understood. Preeclampsia is associated with elevated lipid peroxidation and reduced antioxidant status.Preeclampsia is an endothelial disease with a major involvement of lipid mediated oxidative damage.[1] A consistent positive association between maternal dyslipidemia and the risk of preeclampsia have already been found.

MDA is the end product of lipid peroxidation and reflects the oxidative status of the biological system [2]. MDA causes damage to LDL molecules. The altered LDL is taken up by macrophages via scavenger receptors and forms foam cells. [3] This in turn results in atherogenesis.

PON1 (E.C 3.1.1.2) an esterase enzyme associated with HDL exerts a protective effect against oxidative damage of circulating cells and lipoproteins. [4] The hydrolysis of the oxidized phospholipids by PON destroys the biologic- ally active lipids in mildly oxidized LDL. [5] Thereby, HDL and its associated PON1 interrupt a process that would otherwise lead to oxidative damage. PON1 thus can be an indicator of antioxidant status in preeclampsia. Oxidative stress is known to be increased in preeclampsia. Hence this study was aimed to assess the PON 1 activity and MDA levels in preeclampsia along with the Lipid profile and to find their correlation.

The study population consisted of about 60 pregnant women who visited Dr.B.R.Ambedkar Medical College and Hospital, This study was a descriptive study and women with and without preeclampsia was recruited con-secutively. The study protocol was approved by the Insti-tutional Ethics Board.

30 pregnant women with preeclampsia were included in the study. The diagnosis of preeclampsia was based on clinical examination; raised blood pressure (BP>-140/90mmHg), edema and examination of urine for pro-teinuria by dipstick method. 30 normal pregnancies with no preeclampsia or any other complications were included as controls. The exclusion criteria included patients those on vit C/ vit E or antioxidant supplementation or with any other complications other than preeclampsia like gestational diabetes, diabetes mellitus, hypertension, coronary heart disease, impaired renal function, multiple pregnancy and other chronic diseases that might interfere with the study.

Fasting venous blood samples were collected, the sample was centrifuged at 3000rpm for 10 minutes and serum was separated as early as possible and stored for analysis. Paraoxonase activity was determined by measuring the rate of hydrolysis of paraoxon (dimethyl ?p-nitrophenylphosphate) by monitoring the increase of ab-sorbance at 412nm at 37°c. The amount of generated p-nitrophenol was calculated from the molar absorptivity coefficient at a pH of 8.5, which was 18290 mol-1cm-1. [6]PON activity was expressed as U/L serum. One Unit (U) of paraoxanse activity was defined as one micro mol of released p-nitrophenol per litre of serum per minute and expressed in U/L [7]

Table 1: The demographic features of pregnant women with and without preeclampsia. 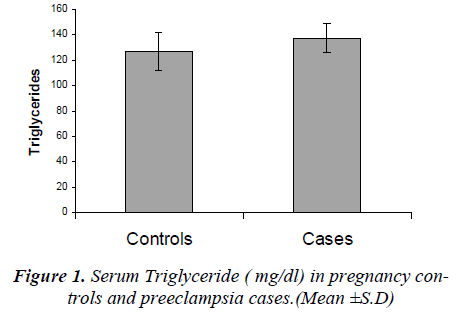 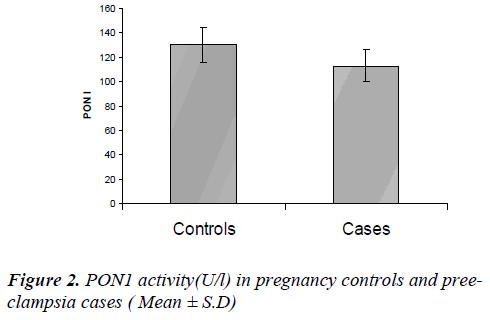 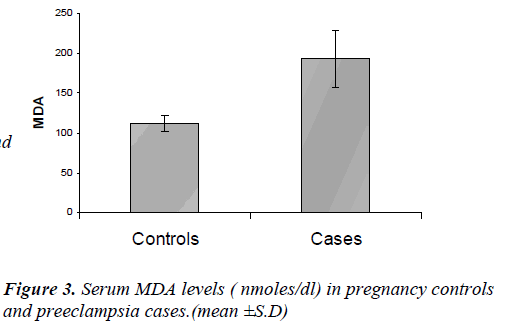 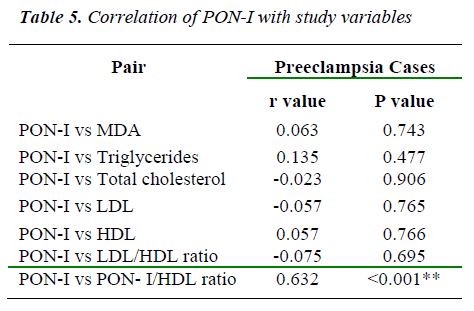 There are several proposed mechanisms for explaining the anti atherogeneic properties of HDL. PON1 is calcium dependent esterase, is exclusively bound to the HDL frac-tion of serum. [9]. PON1 prevents the oxidative modifica-tion of LDL and is responsible for the antioxidant activity of HDL [2]. Preeclampsia has been associated with atherogenic wall changes in the uteroplacental bed.[10] These changes consequently results in necrosis of vessel wall and accumulation of lipid laden foam cells with oxi-dized LDL.In preeclampsia, the placental damage is pro-gressive and can be compensated for sometime depending on the severity of initial placental defect and intrinsic pla-cental antioxidant capacity.[11]

Lipid peroxides are directly involved in mediating mater-nal endothelial dysfunction by increasing the production of thromboxane A2 and the expression of cell adhesion molecules in the uteroplacental vasculature as well as in the maternal peripheral vasculature.[12] Maternal plasma lipids are significantly elevated during pregnancy. In preeclampsia dyslipidemia pattern of increased concentration of triglyceride, cholesterol and LDL and decreased concentration of HDL have been noticed. Peroxidation of lipids brings about changes in its molecular structure and these changes becomes more marked when the damaged lipids are the constituents of biological membrane Low antioxidant levels may aggravate prooxidant injury on endothelial cells, altering prostacyclin ? thromboxane balance and culminating in preeclampsia.[13],[14]. Hence mechanisms that prevent oxidation of LDL have received increased attention in recent years. One such mechanism is prevention of LDL oxidation by PON1.

In the current study it was found that the PON1 activities were significantly lower in women with preeclampsia than in women with normal pregnancy. MDA levels were significantly higher in preeclampsia cases. The increased MDA levels in preeclampsia is known to be due to in-creased generation of reactive oxygen species and in-creased oxygen demand along with reduction in activities of enzymes like superoxide dismutase, glutathione per-oxidase and decrease in concentration of antioxidants like Vitamin C and Vitamin E.Reactive oxygen species can cause enhanced lipid peroxidation.

Uzun, Benian, Madazh, Topcuoglu, Aydin, Albayrak [15] have reported oxidative stress and decreased paraoxonase activity in preeclampsia. Decreased PON1 activity can cause damage to the vascular endothelium. Preeclampsia results in an increased vascular oxidative stress and endo-thelial damage; although it is not very clear whether this phenomenon occurs before or after the development of preeclampsia. PON1 modulates the susceptibility of HDL to atherogenic modifications such as oxidation, glycation and homocysteinylation and even exerts an anti-inflammatory role.