Incidentally detected localized type of polyarteritis nodosa in the gallbladder

A localized type of polyarteritis nodosa (PN) was incidentally detected in the gallbladder of an 85-year-old man suffering from cholecystitis with repeated epigastralgia. Blood examination revealed an increase in neutrophils and elevation of carcinoembryonic antigen. Laparoscopic cholecystectomy was subsequently performed. Histopathological examination of the resected gallbladder revealed a localized type of PN, appearing as small multiple nodular regions on histological sections. Varying stages of arteritis were detected, but only in the small- and medium-sized arteries of subserosal layer . A bilirubin stone of 1 cm diameter was also detected. No clinical signs of collagen vascular disease or hepatitis-B virus infection were present in the patient. Unfortunately, he died due to congestive heart failure and pulmonary edema 1 year after discharge following the cholecystectomy. Therefore, the patient could not be specifically examined for autoantibodies. Patients with a localized type of PN usually experience acute abdomen simultaneously, but the present case showed no acute symptoms, except for the cholecystitis with cholelithiasis, which caused clinically repeated epigastric pain. Although the histogenesis of this case is unknown, based on the present report, it should be emphasized that a localized type of PN in the gallbladder might be incidentally detected.

A systemic type of polyarteritis nodosa (PN) may affect the gastrointestinal tract [1-3], but rarely involves the gallbladder [4,5], biliary tract [6], liver [2]and colon [7]. A localized type of PN in the gallbladder has been rarely reported with or without signs of autoimmune diseases or acute abdomen [8-12]. PN has also been occasionally detected in hepatitis-B virus-infected cases [3,13-15], in which the gallbladder might act as the primary organ [13]. Localized type of PN can progress into a systemic type, and distinguishing between the histological differences of the two types is difficult [16]. However, distinguishing is important because the prognoses of the two types are different [16], and the localized type is fair in prognosis [16,17]. In some cases, associating vasculitis and antineutrophil cytoplasmic antibodies (ANCA) are detected [18].

In the present case, the patient complained of repeated epigastralgia, and we detected cholecystitis with cholelithiasis. It was noteworthy that PN was detected only in the small- and medium-sized arteries of the gallbladder, and no vasculitis was found in the veins, capillaries, and/or large arteries.

The patient was an 85-year-old man who had suffered from angina pectoris with a stenotic coronary artery and hypertension in the previous 4 months. About 2 months ago, he began complaining of repeated epigastralgia. Subsequent blood examination revealed an increase in white blood cells, including neutrophils, and the elevation of carcinoembryonic antigen(CEA). He was diagnosed with acute-phase cholecystitis, associating cholelithiasis. The gallbladder was extirpated by laproscopy (Fig. 1), disclosing a bilirubin stone 1 cm in diameter (Fig.1, arrow). The mucosal surface of the gallbladder was smooth except for several hard nodular lesions. The gallbladder was fixed in 10% phosphate-buffered formalin solution, dissected for histopathological examination, dehydrated in a graded alcohol series, and embedded in paraffin. Dewaxed sections (4 μm) were stained with hematoxylin–eosin (HE) and elastica van Gieson (EVG) stains. Several small nodular lesions were identified at the subserosal layer on the HE sections (Fig. 2, arrows). 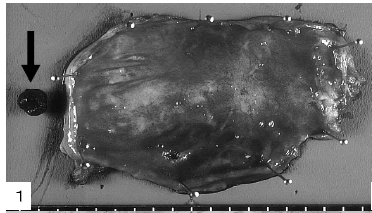 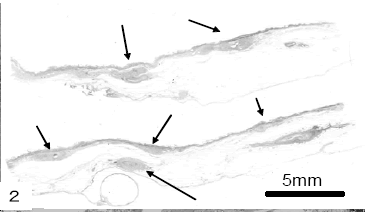 Figure 2: General view of the hematoxylin–eosin (HE)-stained section of the gallbladder. Arrows indicate the location of the arteritis.

He was discharged after undergoing cholecystectomy; however, unfortunately, he died due to congestive heart failure and pulmonary edema approximately 1 year later. It was therefore not possible to perform a detailed examination for autoantibodies.

The histopathological findings included disclosed nodular regions in the subserosal layer, exhibiting a PN pattern only in small- to medium-sized arteries (Fig. 3 A and B). No vasculitis was detected in capillaries, veins, or large arteries. A longitudinally sectioned artery showed the affected and non-affected parts in the wall (Fig. 3 A and B). Small- to medium-sized arteries were obstructed and surrounded by plasma cells, lymphocytes, eosinophils, and neutrophils in varying numbers (Fig. 4 A, B, and C). Fibrinoid necrosis and proliferating granulation tissue were observed in the walls of the small arteries, and their internal cavities were lost. Eosinophils increased focally in some parts of the arteries. Among the infiltrating lymphocytes, CD8 were more predominant than CD4, and they had infiltrated all the arterial walls (Fig. 4D). The EVG sections revealed a circular form of partially broken elastic fibers in an artery, of which HE findings were shown in Fig. 5A (Fig. 5B), and an increase in alpha-smooth muscle actin-positive cells in the intima and media (Fig. 5C). A defect in the smooth muscle layer was clearly demonstrated by the h-caldesmon stain (Fig. 5D). It appeared that myofibroblasts proliferated densely at the intima and media with fibrinoid necrosis. The internal cavities of the small arteries had disappeared due to inflammation, and each artery showed different inflamatory stages of vasculitis. Most of the infiltrated lymphocytes were T-cells and CD45RO-positive cells; only a few CD20-positive cells were present. CD68-positive macrophages were detected only in small numbers. IgGpositive plasma cells were scattered surrounding the arteries. From these results, the patient was diagnosed with a localized type of PN in the gallbladder.

Figure 3: Small- and medium-sized arteries were markedly affected (arrows in A and B), but the continuing large artery was not (double arrow). HE stain; A, B; magnification, 100×. 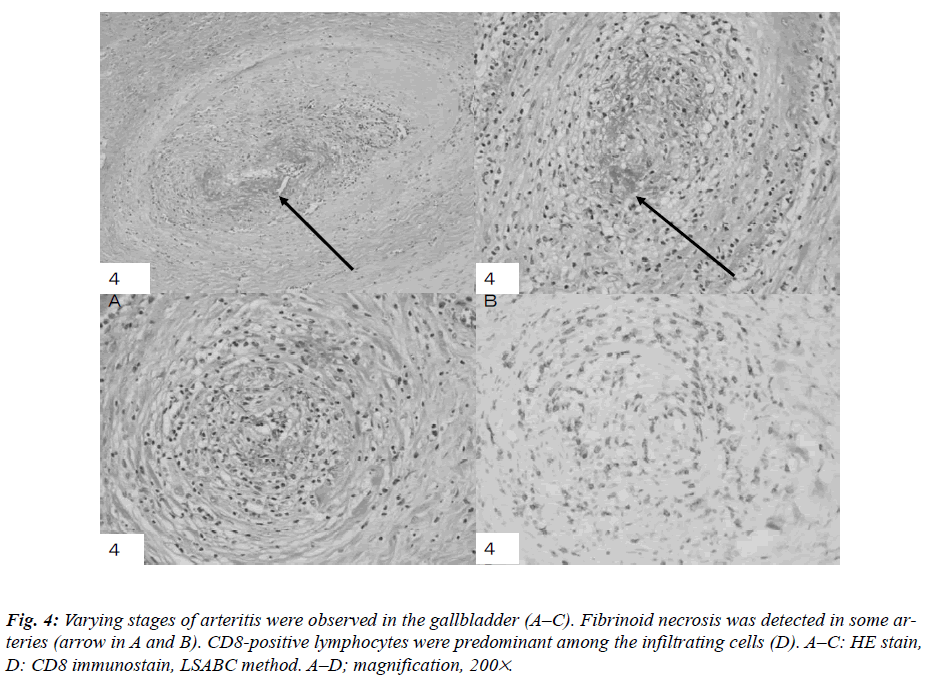 Figure 4: Varying stages of arteritis were observed in the gallbladder (A–C). Fibrinoid necrosis was detected in some arteries (arrow in A and B). CD8-positive lymphocytes were predominant among the infiltrating cells (D). A–C: HE stain, D: CD8 immunostain, LSABC method. A–D; magnification, 200×. 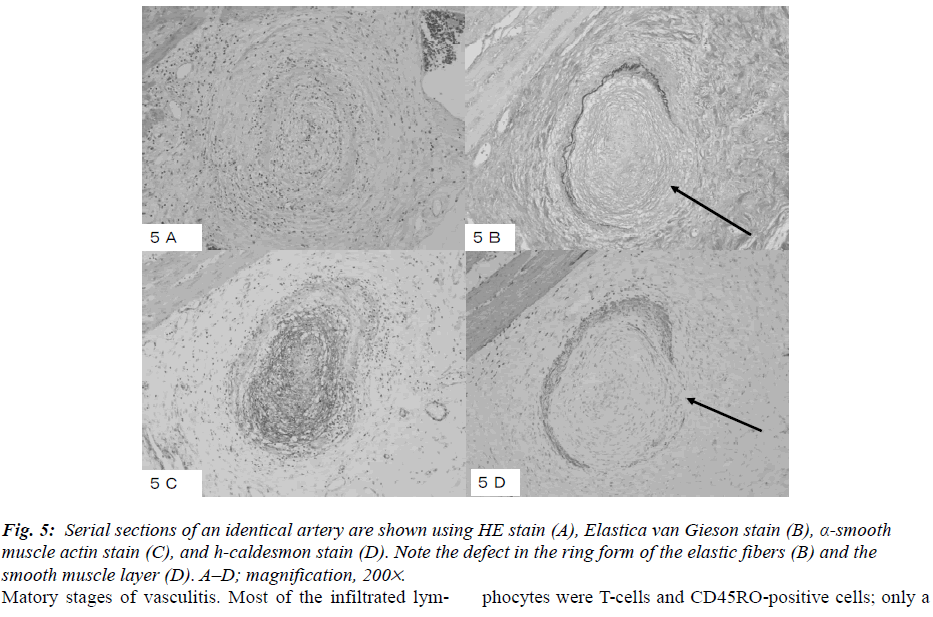 Figure 5: Serial sections of an identical artery are shown using HE stain (A), Elastica van Gieson stain (B), α-smooth muscle actin stain (C), and h-caldesmon stain (D). Note the defect in the ring form of the elastic fibers (B) and the smooth muscle layer (D). A–D; magnification, 200×.

A truly localized type of PN is rare [8,10-12], and on rarer occasions, polycystic kidney and PN of the gallbladder have been found simultaneously [12]. Some cases of progression from the localized to the systemic type have also been reported [1], and the transition has been recognized. The localized type of PN shows a fair prognosis when resected [17].

The initial symptom is occasionally an acute abdomen [11], which is sometimes manifested in the gastrointestinal tract [1-3], gallbladder [4,5], biliary tract [6], and colon [7]. It has been reported that gangrenous cholecystitis discloses the localized type of PN [11]. Although in the present case, the patient complained of epigastralgia, acute abdomen was absent. The chronic inflammatory signs in the gallbladder were mild to moderate in phase with cholelithiasis. White blood cells and CEA increased in this patient, but acute histopathological findings were not detected. Although most cases of the localized type do not have autoantibodies [13,14] and some cases with vasculitis manifest ANCA [18], no examination could be performed in the present case due to the death of the patient. Most localized cases are accidentally detected [4,10,11] similar to the present case.