Introduction: Acute Kidney Injury (AKI) is associated with severe morbidity and mortality. Lack of consensus definition has been major limitation in improving outcomes. Acute Dialysis Quality Initiative Group (ADQI) group proposed RIFLE (Risk, Injury, Failure, Loss of function, End stage renal disease) criteria, criteria for defining AKI, later modified in children as pRIFLE (pediatric RIFLE). This study tries to address the need of limited data on pediatric AKI.
Methodology: A prospective study conducted in between December 2013 to May 2015. Serum creatinine level was estimated on all patients on admission and alternate days till discharge from Pediatric Intensive Care Unit (PICU). Urine output was recorded. Estimated Creatinine- Clearance (eCrCL) was calculated using Schwartz formula. AKI diagnosis and staging was based on pRIFLE (pediatric RIFLE) criteria. Either eCrCl or urine output criteria were used to diagnose and stage AKI, using criterion that leads to higher stage. Maximal stage that the patient progressed during the stay in PICU was assigned the stage for that case. Data was compiled using SPSS software.
Results: Of total 697 cases, 680 cases met inclusion criteria. Incidence of AKI was 178 (26.1%). Stage ‘Risk (R)’, ‘Injury (I)’ and ‘Failure (F)’ constituted 60.7% (108), 28.6% (51) and 10.6% (19) respectively. Maximum AKI occurred in < 1 year (28.1%) (p=0.003). Urine output and creatinine criteria matching were there in 77%. Infections were commonest etiology. Amongst infections dengue (30%) was most common, followed by sepsis (21.9%) and then pneumonia (17.9%). Hypotension, nephrotoxic drugs, sepsis, need for mechanical ventilation were significant (p<0.001) risk factors for AKI. Prerenal causes constituted 68% and renal 32%.
Conclusion: Incidence of AKI is high among critically ill children. pRIFLE staging system that provides early identification and stratification of AKI. Infections are leading etiology of AKI in children.

Acute Kidney Injury (AKI) has become a major global health care challenge with an estimated 13.3 million cases per year leading to an estimated mortality of 1.7 million deaths per year globally. Increasing prevalence of AKI is strongly associated with increased early and long term patient morbidity and mortality [1]. According to recent meta-analysis conducted by Paweena et al the pooled incidence rate of AKI was 33.7% (95% CI, 26.9 to 41.3) and AKI-associated mortality rates was 13.8% in children (95% CI, 8.8 to 21.0) [2].

“0 by25” is an ambitious initiative of International Society of Nephrology which aims to eliminate preventable deaths from Acute Kidney Injury worldwide by 2025. This initiative emphasizes the magnitude of the problem, the global concern about AKI and its endeavour to eliminate mortality and morbidity due to AKI.

Acute kidney injury previously called acute renal failure is characterized by a reversible increase in the blood concentration of creatinine and nitrogenous waste products and by the inability of the kidney to appropriately regulate fluid and electrolyte homeostasis [3]. If left untreated, the condition has a high risk of multiple organ failure and potentially death. Patients who suffer from AKI may have subsequent renal dysfunction after original injury. Children are more susceptible for this dysfunction [4].

For a long time there was lack of consensus on definition of AKI. In 2005, the first consensus definition of AKI for the adult population, based on the RIFLE (Risk, Injury, Failure, Loss of function, End stage renal disease) criteria, was proposed by the Acute Dialysis Quality Initiative Group (ADQI) [5]. The definition was later modified and evaluated in critically ill pediatric patients and termed pRIFLE (Pediatric RIFLE) criteria. The pRIFLE criteria differs from RIFLE criteria, in that a) Only decrease in estimated creatinine clearance (eCrCL), and not the change in glomerular filtration rate, is used to determine grading b) The eCrCl is estimated using the Schwartz formula, which incorporates the height and serum creatinine level of the patient, and an age adjusted constant c) pRIFLE incorporates a longer duration of urine output than in adult RIFLE classification.

The spectrum and burden of AKI in developing countries may be different from that of developed countries [6] The patients from developing countries are younger, infection associated AKI is more common and a significant proportion may have already developed AKI at the time of hospitalization. In addition, resource limitations in managing children who require renal replacement therapy add to the burden [7,8].

Most of the studies in AKI are based on adult population. The incidence and clinico-etiological profile of AKI varies from adults to children. Of the pediatric studies on incidence of AKI, many are limited to developed countries and often retrospective [9]. Hence limited data availability on clinical profile of pediatric AKI from Indian children, fallacies of retrospective studies, and regional variations in the profile of AKI makes it compelling to study incidence and outcome of AKI in pediatric patients and current study tries to address this need.

This was a Prospective and observational study conducted at Kempegowda Institute of Medical Sciences, Bangalore. All patients within the age group of 1 month to 18 years admitted to Pediatric Intensive Care Unit (PICU) in between December 2013 to May 2015 were included in the study. Patients with known kidney disease and postoperative cases were excluded from the study.

The study was approved by the Institute Ethics Committee. Informed consent was taken from parents of all participants. Detailed clinical history and examination was done, co-morbidities were noted, and relevant data regarding investigations was collected for all children admitted to PICU.

Urine output measured and recorded as ml/kg/hour. Only patients who were catheterized were considered for urine output criteria.

Diagnosis and staging of AKI was based on Pediatric RIFLE definition & classification. Either eCrCl or urine output was used to diagnose and stage AKI, using a criterion that leads to higher stage classification. Shock was defined in presence of tachycardia, feeble pulses, cool peripheries, hypotension (blood pressure <-2 Standard deviation (SD) for age and sex) or capillary filling time > 3 seconds. Sepsis was the presence of systemic inflammatory response syndrome with suspected or proven infection [11]. The diagnosis of prerenal vs renal was decided based on clinical diagnosis and supported by progressively increasing serum creatinine values, even after 48 hours of admission and appropriate fluid therapy (Table 1).

The maximal stage that the patient progressed during the stay in PICU was assigned the final stage for that case. The patients were evaluated to ascertain the etiology of AKI and its progression and were followed until discharge.

In order to estimate these incidence rates at 95% confidence, and precision of 2.5% for the non-critically ill and 9% for critically ill, the minimum required sample sizes were 304 and 104, respectively (Formula used is n=z21-α/2 P(1-P)/€2 where z= 95% power and 5% level of significance (1.96), P is the incidence, €= Absolute precision).The admissions to our PICU in previous year were well above the minimum required sample. Hence all the cases in the study period were considered. 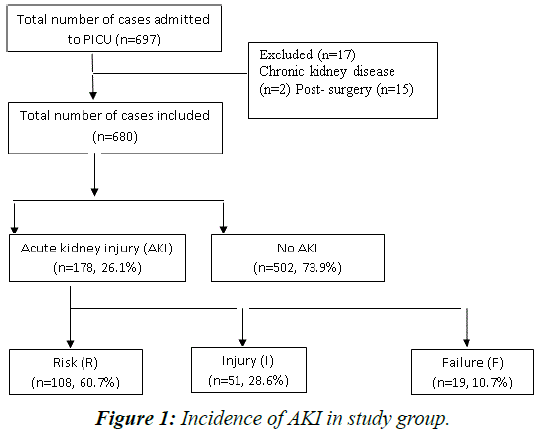 Table 2: Creatinine and urine output criteria stage in relation to incidence of AKI.

In this study maximum AKI occurred in <1 year and incidence was highest among younger age group (p=0.003) (Table 4).

Table 4: Association of Age in years in relation to incidence of AKI.

Infections were the leading cause of AKI. Amongst infections dengue (30%) was the most common etiology associated with AKI, followed by sepsis (21.9%) and then pneumonia (17.9%) (Table 5).

Table 6: Correlation of clinical variables in relation to incidence of AKI.

Table 7: Cause of AKI in relation to incidence of AKI in patients studied.

A Backward Wald logistic regression was performed to ascertain the effects of hypotension, Sepsis, Ventilation and nephrotoxic drugs usage on the likelihood that participants have acute kidney injury. The logistic regression model was statistically significant P<0.001 drawing an inference that each of these risk factors were individually associated with occurrence of AKI (Table 8).

In the present study, the incidence of AKI in PICU was 26.1%. This was comparable to Krishnamurthy et al where incidence was 25.1% [13]. It was high compared to other studies conducted in developed countries such as Schneider et al where incidence was 10% which used only serum creatinine to define AKI and not change in eCCl [14]. However it was lower than reported figure of 82% according to Akan-Arican et al, in which all patients had respiratory failure and were in receipt of mechanical ventilation [15]. This difference can be explained by heterogeneity of patient population, regional differences and sample size can explain this difference.

The maximum number, 28% of AKI patients were below 1 year in our study which was comparable to Mehta et al. This shows that patients with AKI were younger than those without AKI.

The etiology of AKI varies from developed and developing countries. While sepsis, glomerulonephritis, HUS and ATN predominate in developing countries, these are replaced by major surgery, haemato-oncological complications, nephrotoxic drugs and pulmonary failure as cause of AKI. In this study too infections contributed to majority of AKI cases. Amongst infections dengue (30%) was the most common etiology associated with AKI, followed by sepsis (21.9%) and then pneumonia (17.9%). Tropical febrile illnesses have been associated with AKI. Dengue is a tropical febrile illness that is common in this part of country. Dengue constituted the majority of cases. The next common etiology was sepsis. According to both Krishnamurthy et al and Mehta et al sepsis was the most common etiology associated with AKI. There is geographical variation in the etiology. There were no post renal etiologies detected in this study. This could be probably attributed to the post renal causes run a chronic course with progressive deterioration of renal function and also that their detection is more frequent in pediatrics wards than in PICU.

AKI incidence in high in children admitted to PICU. AKI commonly associated with severe dengue, sepsis and pneumonia. It is amenable to treatment provided early diagnosis and prompt treatment. Early identification requires uniform definition and staging system to guide intervention. This study supports use of the pRIFLE score as an easy and simple tool for identification and classifying AKI.